The 12-week program, which places shelter dogs in the foster care of inmates in the Camden County Jail, is about to adopt out its first two service dogs to a pair of local military veterans. 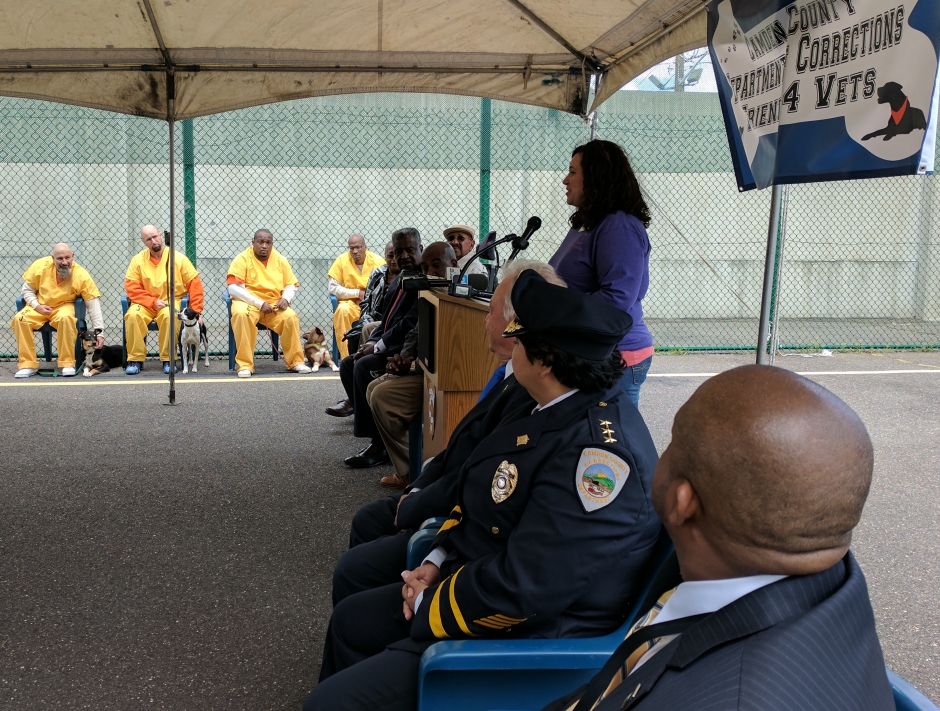 For the past few months, Camden County has been piloting a program by which prisoners in the Camden County Jail foster shelter dogs for adoption by local military veterans

As feel-good stories go, this one hits a trifecta.

But organizers believe that, as the first of its kind in New Jersey, the program could potentially be a rehabilitative model for other county criminal justice systems.

“The average person who has a hardship, there’s always wraparound services to help them get back on track,” said Camden County Freeholder Jonathan Young.

“As [inmates are] coming through Corrections, part of our responsibility is to make sure they’re different when they come out than when they came in,” Young said. “The hope and intention is that this program here is at the cutting edge of changing the tide.”

For 12 weeks, the inmates spend every hour of every day with their foster pups and keep a journal of their activities. Trainer Marissa Corbett of Above and Beyond Animal Training and One Love Animal Rescue helps them teach the animals crate training, basic manners, and basic commands. The dogs, who may never have had any training before, are exercised daily, and must learn to behave around distractions like people and food. 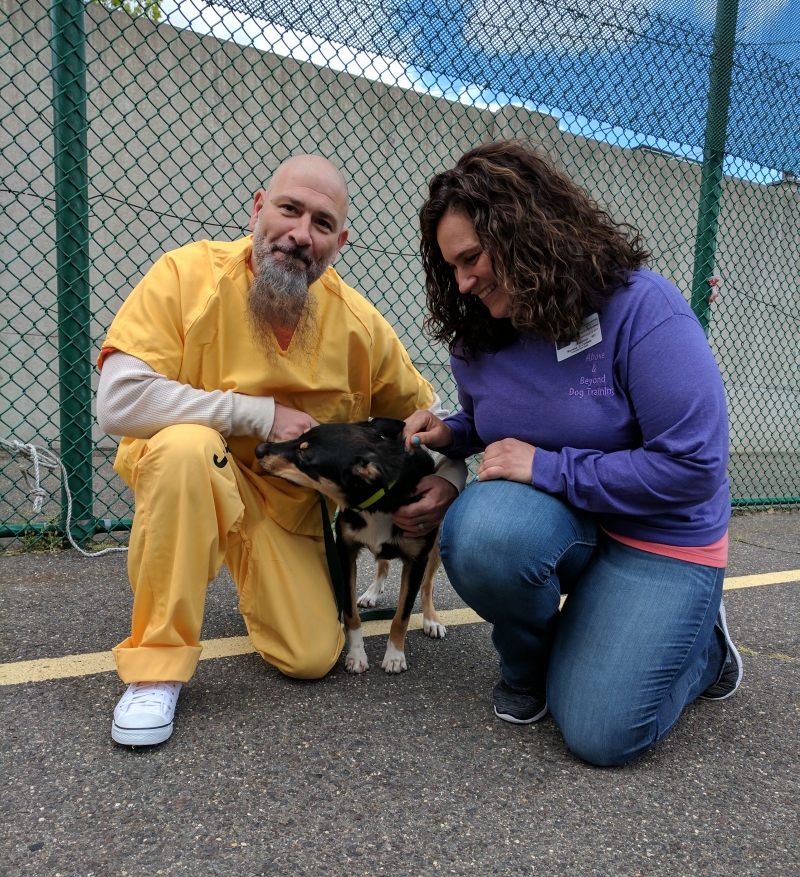 “We’re working on how to be good dogs in general,” Corbett said, a nod to the American Kennel Club Canine Good Citizen training program, which each dog will complete by the end of the course.

“The guys and the dogs have far exceeded my expectations,” Corbett said.

“They’re making me look good,” she said. “They’re doing a great job. I’m excited for the next phase for them to be adopted by the veterans.”

Arthur Wimberly of Pennsauken is the first veteran scheduled to receive a dog from the program.

Wimberly said he was impressed with the program and the efforts of the trainers, and is looking forward to welcoming a dog into his home.

“He’s going to be spoiled, no doubt about it,” Wimberly said. “And he’s going to make my life better.”

Wimberly, who uses a wheelchair, spoke about how life with a pet can help with depression. He also credited his wife of 42 years, Roxanne, with helping him remain active. A five-year member of the Philadelphia Fever, Wimberly participates in the National Veterans Wheelchair Games, “so the dog will be moving around,” he said.

“So far, it’s just an honor right now to be selected,” Roxanne Wimberly said. “We want it to work.” 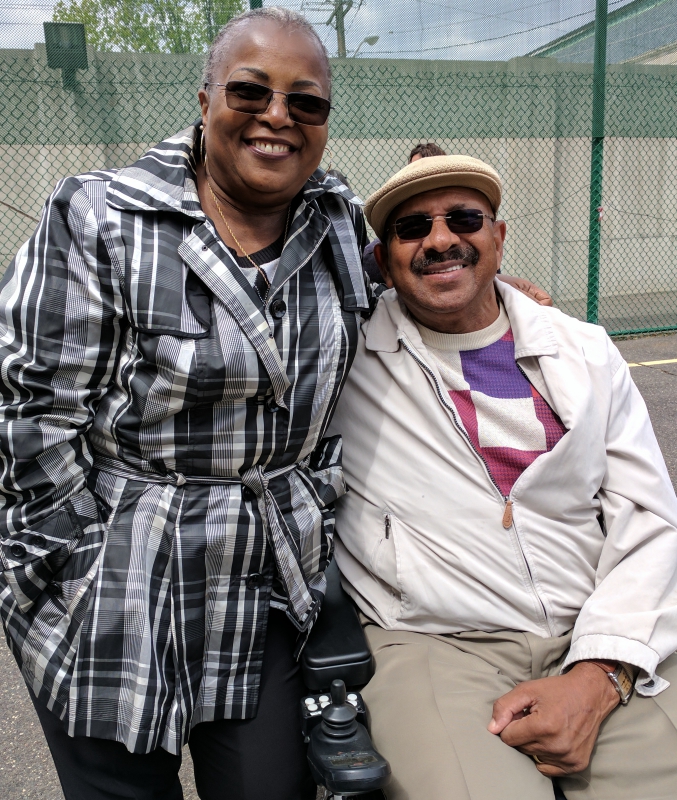 Roxanne and Arthur Wimberly of Pennsauken are going to be the first to receive a service dog from the program. Credit: Matt Skoufalos.

Camden County Director of Corrections David Owens said the program has been beneficial, but will require more money to sustain.

Owens is hopeful that the county will be able to secure long-term funds from the state to keep the program viable.

“There will be many graduations to follow,” Owens said.

Inmate Darren Hardison said getting close with all the dogs has been beneficial for him.

“We go through a state of depression too,” he said. “We’re away from our family and our loved ones. As [the dogs] learn, it’s just like teaching your child. You watch them grow and learn and listen.” 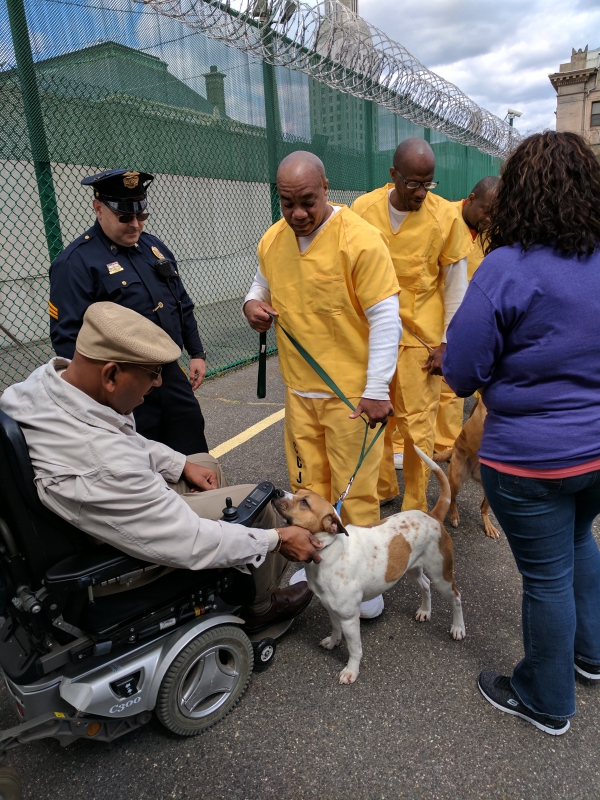 Scott Ryan said that caring for his dog, Echo, helped him take better care for himself.

“I learned to take care of those animals,’” Ryan said. “To do that, I have to have a clear mindset.”

Of the five dogs in the program, Hardison thinks his dog, Duchess, is most ready to be placed in a permanent home.

The others include Cinnamon, who’s been fostered by Duncan Davis; Juno, who has been cared for by Richard King; and Roe, Ray Sierra’s charge.

Young is optimistic that the program will yet pay greater dividends.

“We know animals, dogs in particular, are a very good tool to heal people,” he said.

“That’s what we’re looking to do.”