Since January 2015, workers have demolished 531 unsafe or abandoned structures in the city, with another 60 in process. Officials say the project is the largest of its kind in the state. 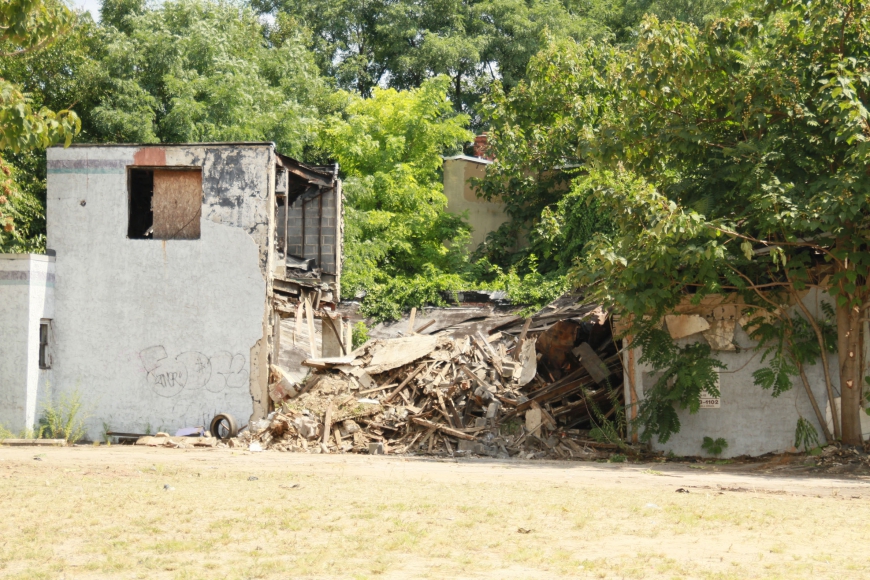 Louis Morales stood outside the Fortuna Mini Market at Kaighn Avenue and Louis Street, watching as one of two empty lots facing the storefront filled with government officials and reporters.

When told they were celebrating the demolition of some 500 unsafe and abandoned residences throughout the city Morales nodded his head and reflected that his East Camden neighborhood has improved in the 15 years he’s lived there.

“The police are working,” he said. “I feel better. I feel safer. It’s better, quieter.”

Morales said demolition helps improve the neighborhoods “as long as they put something back up.”

“Put more apartments,” he said, gesturing to the vacancies nearby. “They can build a nice flow here.”

Since January 2015, the $13.6-million project has razed or remediated 531 residential properties that Camden City Mayor Dana Redd called “the worst of the worst”; havens for prostitution, drug dealing, and gang crime. Redd said the work “has been advocated for by resident for years,” and represents a commitment from the city government to quality-of-life improvements for its constituents. 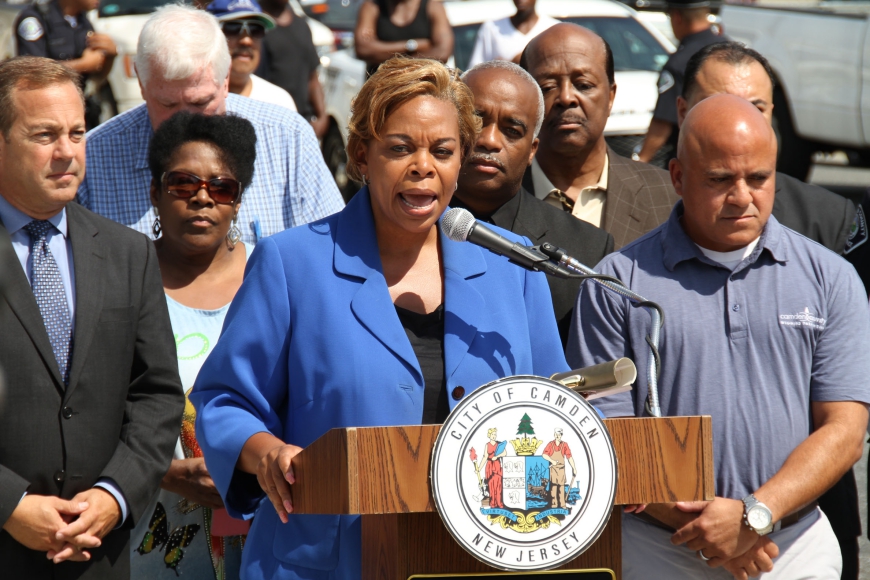 Another 60 units are on track to be demolished by mid-September, and the city has secured another $3 million for the removal of dilapidated commercial buildings next.

“Abandoned properties was the most talked-about issue in city council month after month,” Moran said. “Now they’re gone. Now we have a future where we can build.”

With the structures demolished, Moran said the land they occupied would be banked through public-private neighborhood partnerships with community development corporations (CDC’s), such as those in Parkside, Woodland, and Cramer Hill. The process helps tie deeds to the land to commitments to develop them in keeping with the goals of the neighborhoods, while allowing the CDC’s to “adopt” the lots in the interim, installing temporary improvements like pop-up sites and community gardens to curb blight. 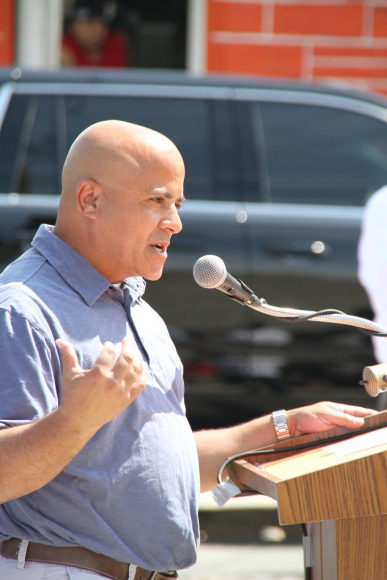 Moran said the properties would be open to “real developers with real resources” for the construction of affordable and moderate-income houses.

Officials couldn’t produce dollar figures on how much of the $13.6 million invested in the project trickled down to local businesses, but said that some 70 percent of labor was sourced from local trade unions.

Not every Camden business is equipped to negotiate the process of bidding for a government contract, but “that doesn’t mean you can’t be part of the team,” Moran said

Camden County Freeholder Louis Cappelli said the sourcing of local labor is a sign that the city is supporting its rehabilitation with job creation.

Although the county and city government “hear complaints that all the help in Camden is going to the big developers and the neighborhoods are ignored,”Cappelli said the demolition project has generated jobs for Camden residents and improves quality of life in the city. Acknowledging his remarks, Redd later said that small-business needs had been back-burnered because “large building blocks had to be put into place first.” 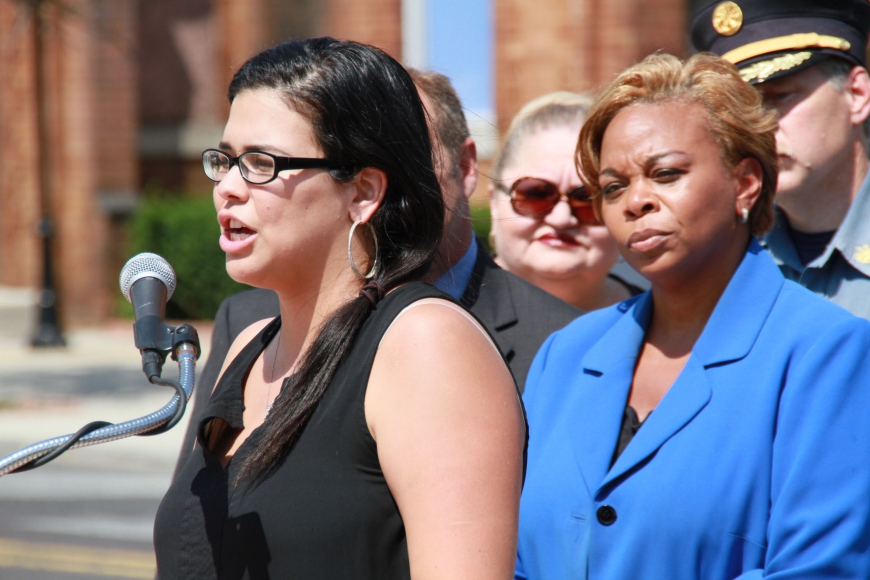 Franchesca Abed of Ralf’s Heating, Plumbing, and Electrical Contractors said Camden businesses like hers have the talent to deliver on big projects, but don’t often get the chance to demonstrate their capabilities.

“I have two licensed plumbers and two journeymen,” Abed said. “It’s not a lack of experience; it’s a lack of opportunity.”

Her small shop is often judged by its size, and Abed said her crews respond by hitting job sites with gusto. When tasked with overseeing the utility disconnections in properties slated for demolition, her workers managed some 15 to 20 a day.

Building a good reputation on large-scale projects gives a business like hers the opportunity to grow its portfolio, but Abed, who lives in the city with her two children, said the work took on personal significance as well. She takes pride in being part of the solution to revitalize places “that nobody wants to come to [or] hang out in.” . 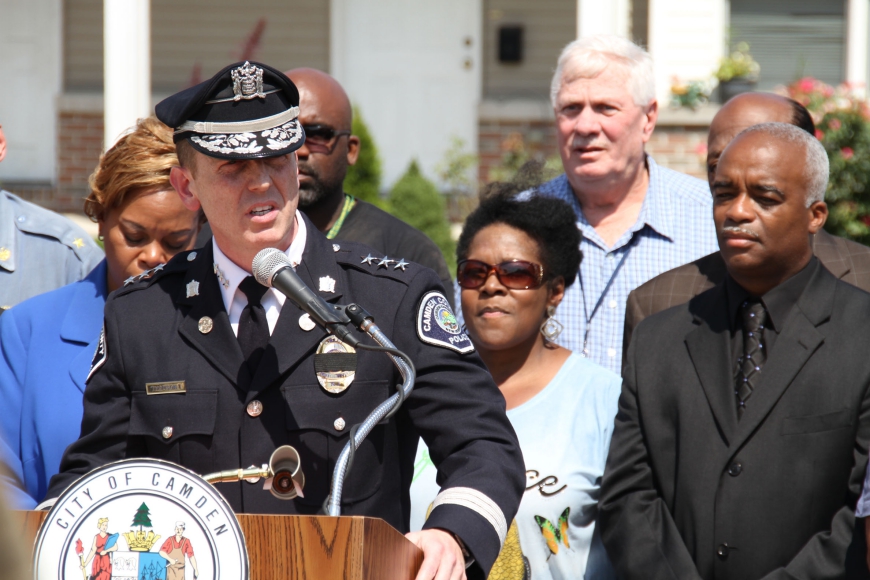 “The properties attracted gang activity, drug use, and prostitution,” Thomson said. “We have seen the quality of life in several neighborhoods increase.”

Some neighborhoods may have been burdened with two to three abandoned properties per block, which Thomson called “real challenges to public safety and to officer safety,” particularly when “crimes that garner our attention require officers to go into these properties.”

Officers have suffered career-ending injuries in such circumstances, making even a vacant lot a preferable alternative to an unsafe structure, he said. 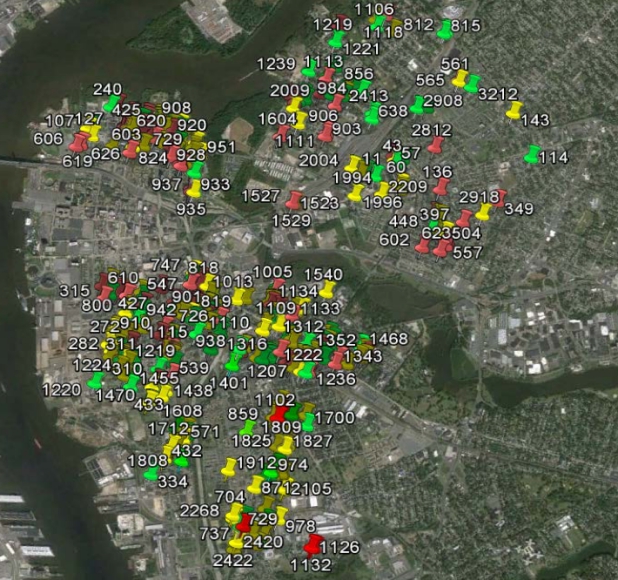 A map of the properties slated for demolition or already completed. Credit: Camden County.

Clearing out blighted properties also encourages families to sit on their stoops and porches, and interact with their neighbors, which in turn builds a stronger community that people feel more positively about, the chief said.

“The tipping point of public safety is when there are more of those people on the street than people looking to cause problems,” Thomson said.

“Nobody’s waving a flag of victory.

“This is progress we can build upon.”