Trending
You are at:Home»People»Demonstrators Condemn Charlottesville Violence in Protest at Haddon Twp.-Collingswood Border

Hundreds gathered Sunday evening to protest the violence of the ‘Unite the Right’ white nationalist riots that left one woman dead and many more injured in Virginia. Still reeling from the violence of the “Unite the Right” white nationalist riots in Charlottesville, Virginia over the weekend, hundreds of South Jerseyans took to a busy Camden County intersection Sunday evening in protest.

Holding four corners of Haddon Avenue and Cuthbert Boulevard on the Haddon Township-Collingswood border, they waved signs, chanted, and cheered when cars rolled by honking their support.

A variety of local political groups was represented, but the lead organizer of the protest was Collingswood resident Michael Scheinberg.

Scheinberg said he was spurred to bring people together to show opposition to the racist and fascist groups that “have always been present” in the United States.

“The only thing that’s going to stop the racist, fascist element is the power of the people,” Scheinberg said.

“We have to press our elected officials to outlaw racism and fascist elements. Other countries already have laws like that.” 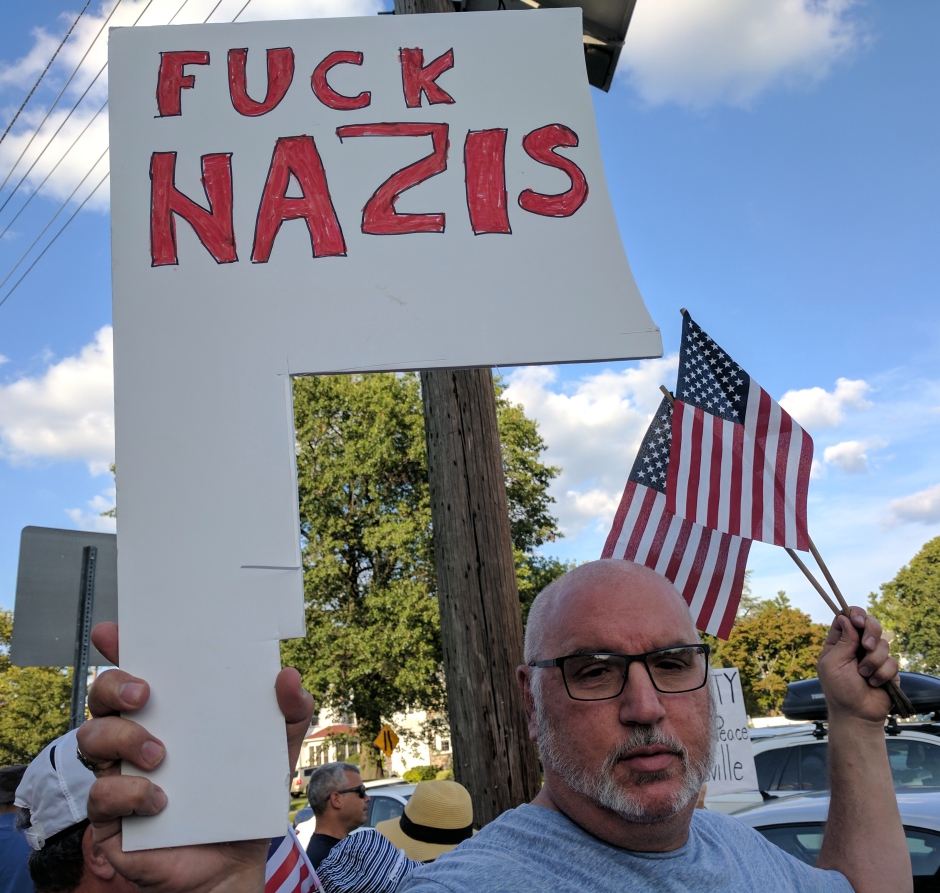 Jeff Quattrone of Woodstown expresses his frustrations with what he called the normalization of white nationalist rhetoric. Credit: Matt Skoufalos.

Jeff Quattrone hoisted an L-shaped piece of foam board on which he’d written, “FUCK NAZIS,” a slogan that reflected his frustration with the apparent mainstreaming of white supremacist rhetoric.

“People are trying to soften dealing with the alt-right, white nationalists, and Nazis,” Quattrone said.

“There can always be common ground, but there’s no acceptance for hate.”

Quattrone, who traveled from Woodstown to attend the demonstration, said he has been a victim of gay-bashing, and it was important to him to show up for the event.

Protesters at Haddon Avenue and Cuthbert Blvd. on the Haddon Twp.-Collingswood border host a demonstration in the wake of the weekend's violence in Charlottesville, Virginia.

Marty Weinar of Moorestown, whose sign read, “Country Over Party,” said too many elected officials lack the moral courage to uphold the obligations of their offices. 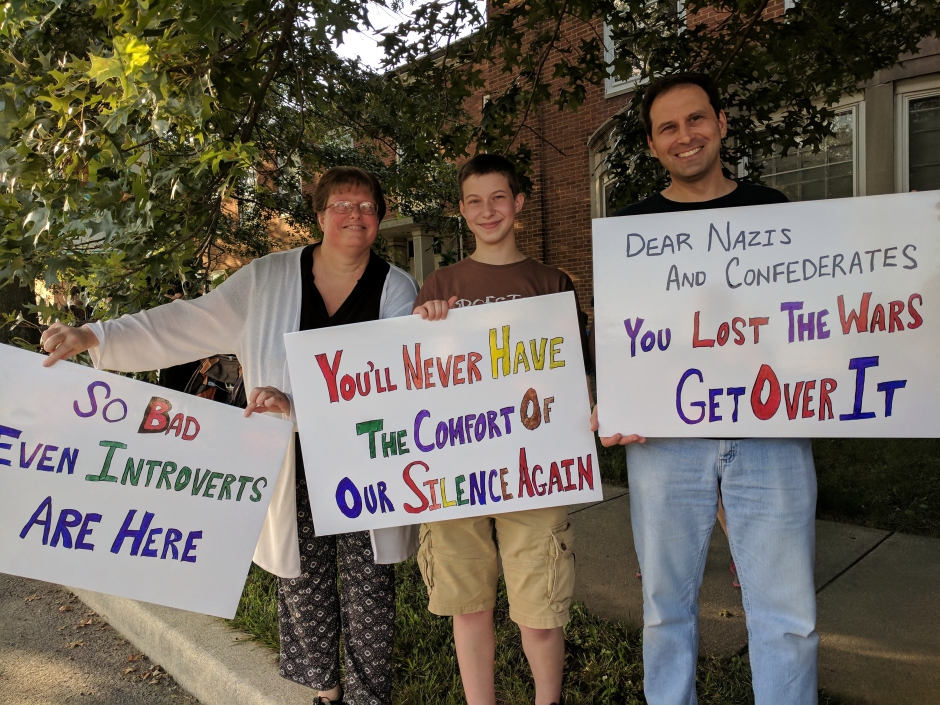 “We’re in this position because they’re putting the party before the country,” Weinar said.

The Gregory family of Haddon Township condemned the Trump administration for what they perceived as its complicity in the violence that happened in Charlottesville.

“The only way it’s going to change is for people to see there’s more of us than them,” said Jennifer Gregory, whose sign read, “So Bad, Even Introverts Are Here.”

Her son, Noah, said protesting is “what people need to do.”

“I really care about the environment and social rights,” Noah Gregory said. “We need to keep persisting in that area.” 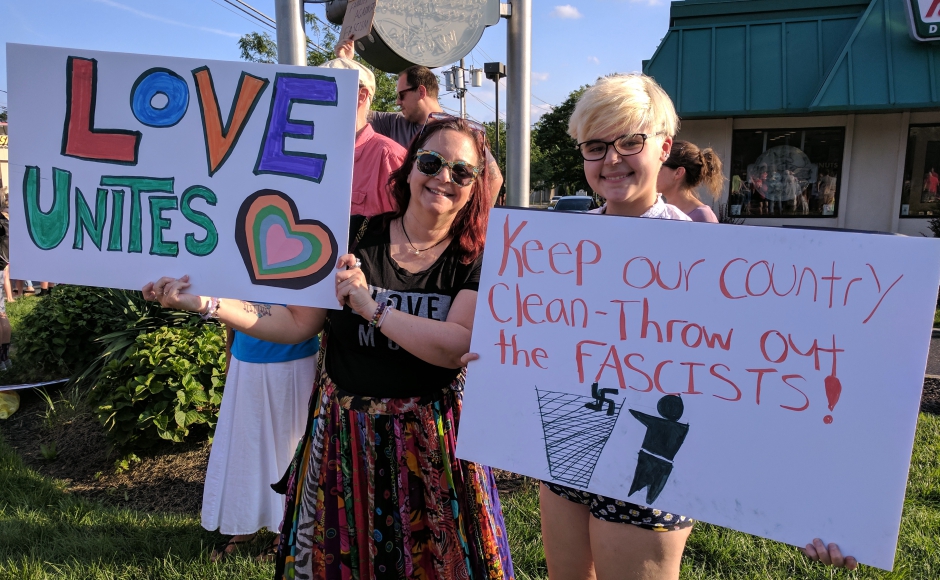 Oliver Farquhar of Oaklyn said the violence in Charlottesville was “absolutely unfathomable,” and that “accepted fascism” should be outlawed.

Farquhar agreed with Scheinberg that the United States needs to legislate away fascist rhetoric, drawing a distinction between targeting someone and saying something offensive.”

Tracy Farquhar said she was there to uphold the importance of gathering in solidarity and community.

“I strongly believe we need to stand in our own truth of love,” she said. 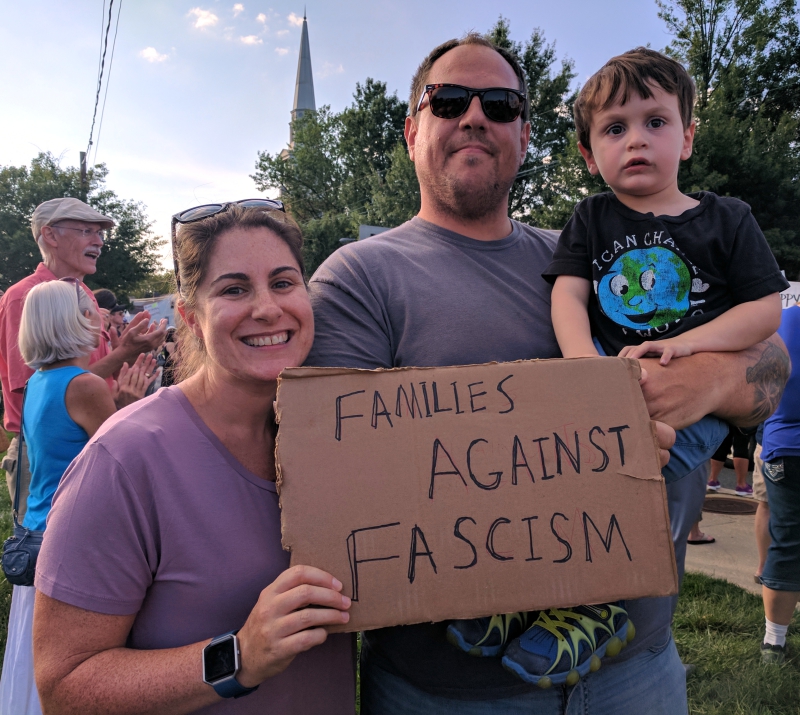 It was the first political demonstration that Jason Yucis of Collingswood said he’s felt moved to attend, citing the egregiousness of the violence in Virginia and what he described as the president’s insufficient response to it.

“Some people think all these sides have equal moral rights, and they don’t,” he said.

“We’re never going to kill that idea, but you’ve got to get your message out there as well.

“I’m a little cynical, but I’m a voter, I’m a citizen, and you’ve got to get out there,” Yucis said.

One protestor, who declined to be identified, said he’d been in Charlottesville for the demonstrations on Friday and Saturday night, and was rattled by the violence he beheld there.

“That attack isn’t isolated,” the man said. “I think we all have an obligation to stand against fascism, supremacy; to put our bodies, lives, and livelihoods on the line.”

The communities represented Sunday are no strangers to political demonstrations motivated by national news; in the past year alone, they’ve gathered after the Pulse Night Club shooting, the ambush of Dallas police officers, and the 2016 U.S. presidential election.