Krishna Singh touched off a firestorm by describing Camden residents as lacking ‘a tradition of work,’ but the backlash to his remarks may drive greater inertia as the city works to develop its labor base. 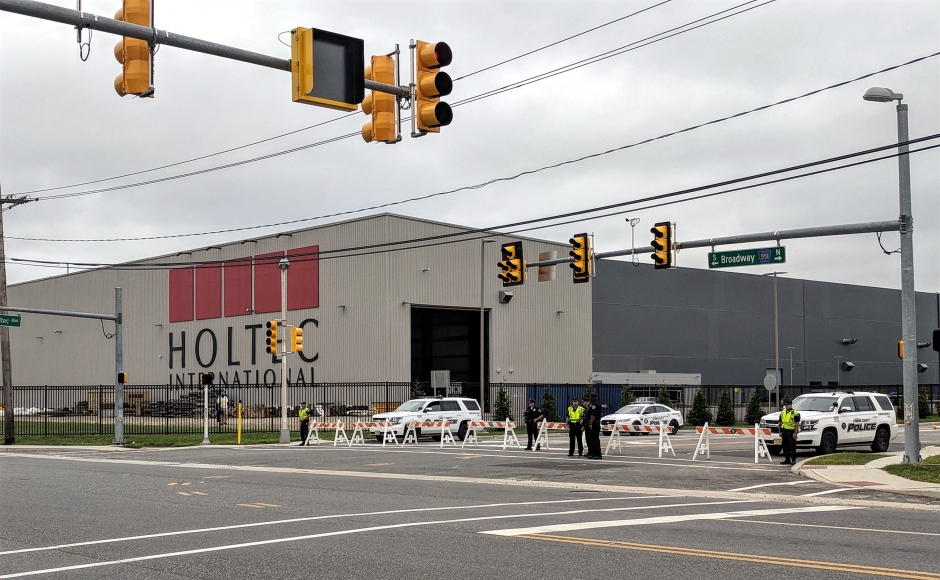 Police barricaded the entrance to Holtec International while protestors gathered across the street. Credit: Matt Skoufalos.

In 2014, manufacturer Holtec International was awarded some $260 million in tax incentives on the strength of its promise to create 230 new jobs in Camden City.

But a few stray remarks from its CEO to a business journal may have done more to jumpstart workforce development efforts than any of those tax breaks.

Earlier this week, Holtec CEO Krishna Singh and other Camden leaders were quoted liberally in ROI-NJ, a statewide business publication, on the difficulty of recruiting and retaining a local labor base in the job-starved city.

“There is no tradition of work in [Camden] families,” Singh told reporter Anjalee Khemlani, claiming that eight of every 10 hires “weed themselves out” of a job at his facility:

“They don’t show up to work,” he said. “They can’t stand getting up in the morning and coming to work every single day. They haven’t done it, and they didn’t see their parents do it. Of course, some of them get into drugs and things. So, it’s difficult.”

Singh wasn’t the only source quoted in the piece. EMR President Joe Balzano spoke of a disconnect between employer and employee expectations in the city, and Congressman Donald Norcross took some heat for casual remarks about a lack of generational structure in city families.

But it was Singh’s comments that touched off a firestorm of controversy almost overnight.

Camden City Mayor Frank Moran blasted the “nasty generalizations” and “outrageous stereotyping of Camden residents” in a written statement Thursday. By lunchtime Friday, community organizers were leading a picket outside the Holtec campus, the entrance to which was barricaded by Camden County Police.

“We would have had a lot more Camden residents here today, but they are at work,” said community organizer Amir Khan of the nonprofit Nehemiah Group. “They followed in the footsteps of their parents, who went to work. Those here are on their lunch break.”

Ronsha Dickerson, Journey for Justice Alliance organizer, and cofounder of the Camden Parent Union, decried the “false narrative” that “Camden residents are suffering from hereditary poverty.

“What we need you to address is that hereditary poverty is the main symptom of the disease called systemic racism,” Dickerson said.

“Holtec International came to our great city as a taker,” she said. “You came here because it was beneficial to your bottom line. We do not need you to define us or speak for us.” 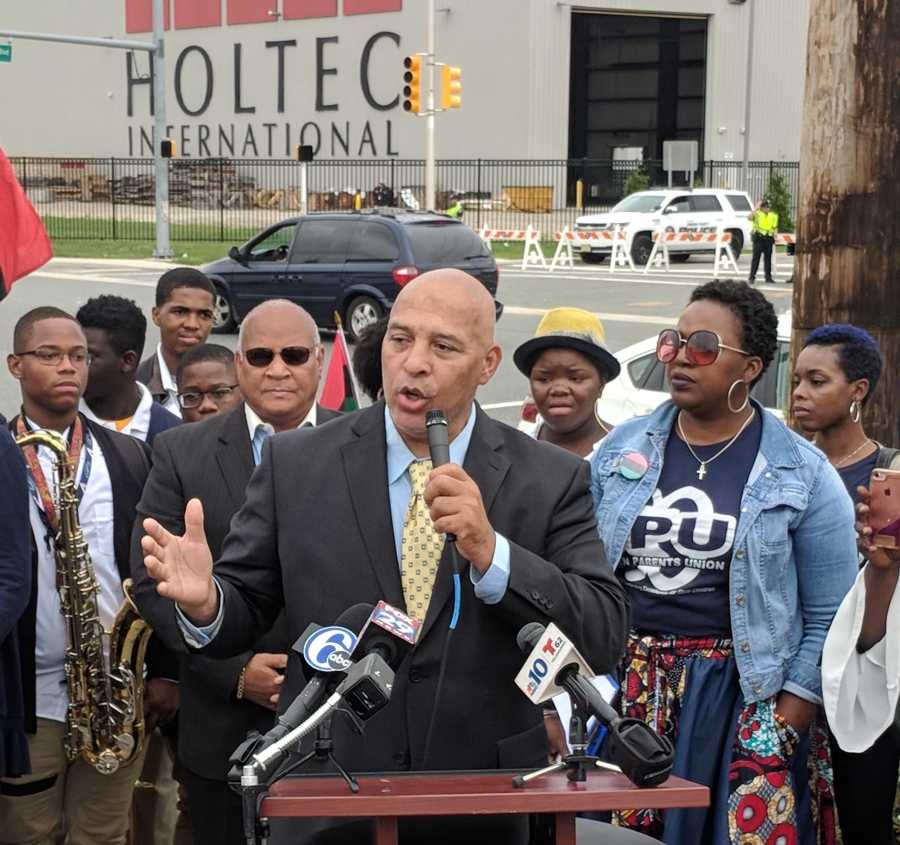 Karl Walko, president of Communication Workers of America Local 1014, told the crowd, “the statements that were made go beyond Holtec.

“People show up for work [and]  work hard,” Walko said.

“They’re not going down without a fight.”

“These statements alone violate affirmative action clauses,” Oglesby said. “How dare he say he didn’t see people that can work.

“People don’t like to be insulted when they never had a seat at the table,” he said. “Give us a fair wage, we’ll give you a day’s work.”

Oglesby also criticized the city government for its failure to enter into binding agreements with EDA-incentivized businesses like Holtec, American Water, Connor Strong Buckalew, the Philadelphia 76ers, and the Michaels Organization. All have promised givebacks to the city, but without signed community benefit agreements (CBAs), there’s nothing holding those enterprises to anything specific.

“Labor agreements require you to put some of that money into the community,” he said. “If you have that, all of them would be held to a standard that was guaranteed.” 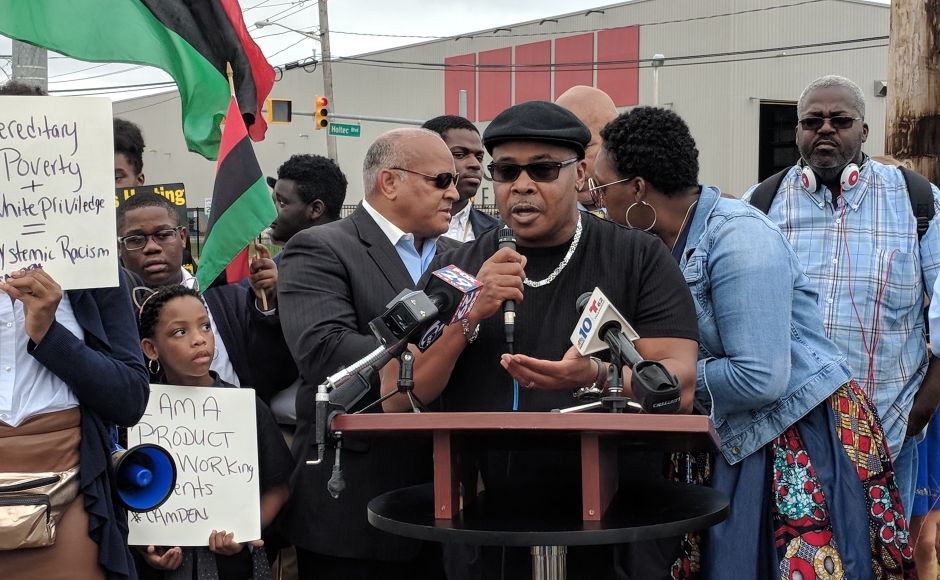 “We want to take your complaints,” Hardwick said.

Other Camden small business owners outright rejected the notion that Camden doesn’t have a viable workforce.

Rosemari Hicks, a recruiter who operates the Cowork Street business incubator at Third and Market, said she places city residents with local employers all the time.

“I deal with educated people who are looking for employment in the city,” Hicks said. “Saying folks don’t want to get up [in the morning]  plays into an old stereotype of people of color.”

Although Singh walked back his remarks in a written apology Friday (see below—ed.), Hicks said his comments “felt like they were tone-deaf, whether it was intentional or not.

“It felt like a true representation of how this organization views the city of Camden,” she said. “They’re not looking at the full landscape here; it’s a short-sighted narrative.”

After 28 years in the city, Camden Printworks owner Adam Woods said the idea that its people aren’t employable didn’t match his experiences. 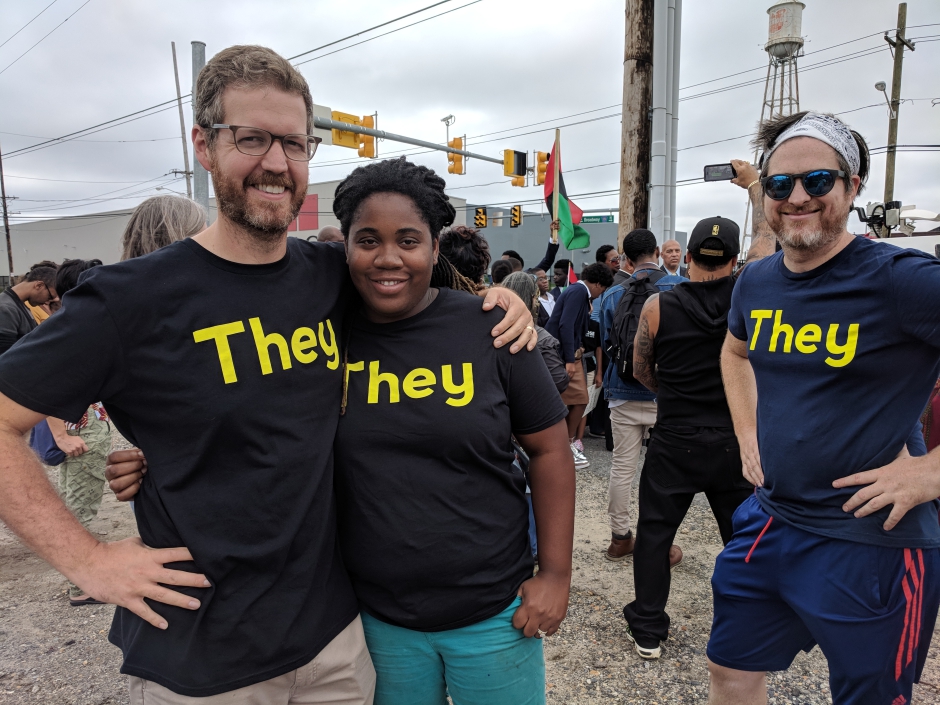 “I completely reject the idea that there aren’t capable people here,” Woods said.

“Our [resident]  employees are the most loyal and the most capable.”

After seeing Holtec workers arrive on the job Friday with “THEY” signs attached to their shirts—illustrating for Singh that his crews include residents hurt by his remarks—Woods showed up at the rally with freshly printed “They” shirts to hand out.

He chalked up Singh’s remarks to a lack of corporate accountability in a city desperate for revitalization.

“Big business is using a fortress, or campus, mentality, and not engaging with the community,” Woods said. “I think small business is a key to the redevelopment of Camden. We have never once been incentivized.

“We’re in a city that lacks services and infrastructure, and accountability is one of the first things to go,” he said. “We don’t have any recourse, but now we know when people want to locate here what to demand before we give them the key to the city.”

Camden Mayor Frank Moran fired back at Singh Friday in a press conference at city hall. Flanked by elected officials from the city, county, state, and federal governments, he pledged to “stand firm with our friends…to put solutions together.”

“I will hold every corporation to high standards to hire in Camden first,” Moran said, even as he issued “a warning to anyone that wishes to diss my city.

“We will not tolerate anyone talking down to our city,” the mayor said. 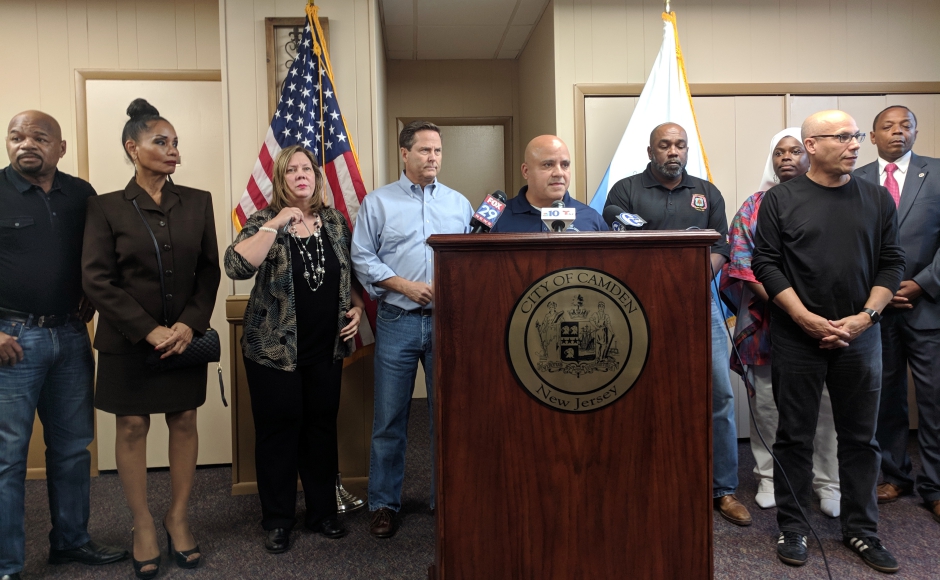 To the residents, he added, “If we’re all fighting for the same cause, I expect you to unite with me.”

Moran’s remarks also illustrated the difficulty of his position in too sharply critiquing a business community that’s spurred $2 billion in public and private investment in the city in the past half-decade.

“Instead of an exodus, people are moving back in,” he said.

“We will continue to prepare our folks so when corporate CEOs makes excuses, we are prepared for the opportunity.”

Norcross dodged questions on the tenor of his remarks in the ROI-NJ piece, citing instead his career as a leader in organized labor. He and Moran also jointly announced a jobs event at the Rowan University Camden campus next Wednesday, September 19.

Called “Camden Working,” the event is billed as “a summit on jobs and career training for the City of Camden, with the area’s largest employers, public officials, and community leaders and stakeholders” in attendance.

“For years, we’ve been working with partners at our community college, workforce investment board, county job training center and higher education institutions on programs to help prepare workers for the high-tech, high-intensity jobs that are becoming available,” Norcross said in a written statement.

“We hire employees, and train them, or continue their training if they have some skill in a specific area,” Russell said. “All associates are paid during onboarding and the entire training process.”

Singh’s apology is reprinted below, in full.

“Mayor Frank Moran’s and other activists’ ire evidently derives from reading certain out-of-context excerpts reported by ROI-NJ, which misrepresents both the tone and the substance of the interview I gave them.

“I am sorry that my misconstrued comments may have offended or slighted/disrespected some people. My complete comments were not reported, but even if they were, I was perhaps not as articulate as I could have been while I was discussing my deep commitment to the City of Camden and its residents.

“I am enormously proud to work with a large and growing number of able and conscientious workers from Camden, and my comments were meant to explain the effort we are making to ensure that every Camden resident who wishes to work with us, has the pathway to a successful career.

“That said, we do face an uphill battle in finding workers in the city. We are committed to continue our recruitment of as many Camden residents as possible, and train them to become productive, long- term company associates.

“We came to Camden to help people whose plight has been long ignored by the larger society. We remain resolute in our mission to do our share in uplifting the city. We are even considering locating our next plant, one that will produce (entirely non-polluting) energy storage systems, in Camden.

“We are extremely proud to be part of Camden’s renaissance. I look forward to continuing to work with community, and neighborhood leaders and city officials to continue what has proven to be a great partnership between Holtec, the City of Camden and its citizens.”