Trending
You are at:Home»Government»Violence, Finances, and DREAMers: Oaklyn Roundtable Talks Concerns with Congressman 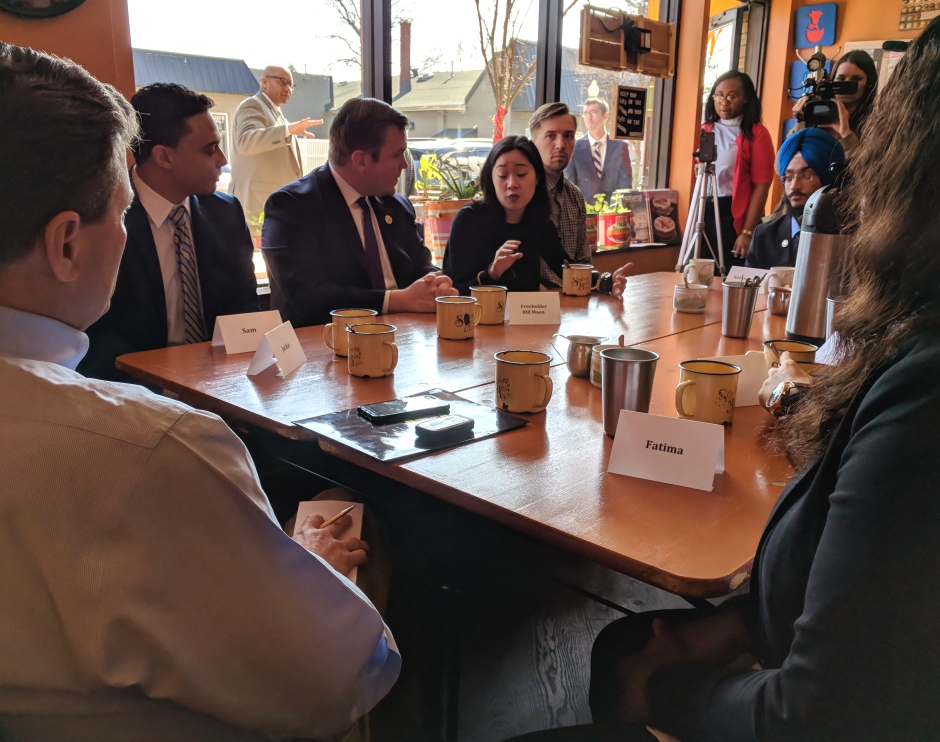 U.S. Congressman Donald Norcross (D, NJ-01) hosted a roundtable discussion in Oaklyn on Tuesday, welcoming a selected group of young professionals to The Square Meal for a lunch-and-listen.

From economic policy to fears of public safety, they brought their concerns to the table, offering a generational perspective on the issues of the day.

Tech entrepreneur Chris Barrett of Collingswood said he was saddened by the notion that Americans have become desensitized to gun violence.

Barrett said he was shocked to think that the Parkland Elementary School shooting may have escaped greater awareness “because it was only 17 people that were killed.

Somerdale resident Fatima Heyward, communications coordinator for Planned Parenthood and a multi-agency community volunteer, said news-cycle fatigue diminishes her hopes of violence being reined in. She added that political factionalism only contribute to feelings of stagnation.

“We can barely keep up with what’s happening,” Heyward said. “Until we can start working together, we may not be able to come to any type of solutions.

“We know who our partners are, but how are we going to get some real conversations started if we can’t connect with people who have opposite views?” she said.

Karanveer Singh Pannu, a Rutgers-Camden student who has authored a book on bullying, said the vague, generalized fears of the country are reflected in the casual cruelties to which people subject one another. 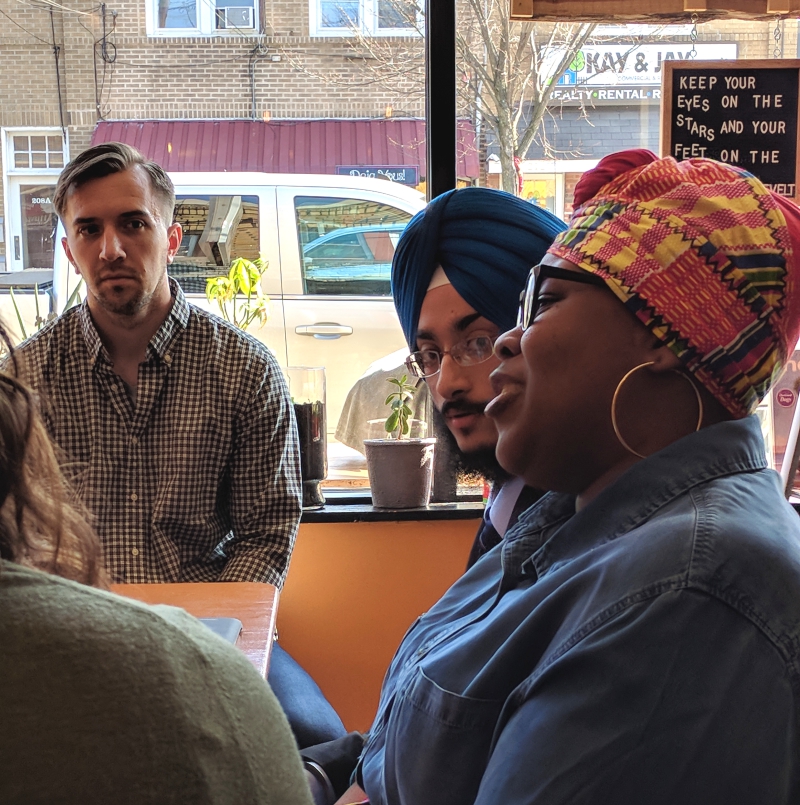 “In this political climate, the hate is growing and it’s there,” Pannu said.

“[Yet]  although there is a rise in hate, I see the love in Americans,” he said.

“[Working with kids], I’ve seen it in their eyes that they are fearful but they have that love inside of them,” Pannu said. “They need to let it out.

“We just need to focus and make everyone realize that the only way we’re going to rise in this country is if we rise together.”

“I live in Camden; I have a sister who goes to Cherry Hill High School, and she deals with more bullying than I do in Camden,” Tran said.

“I don’t know what’s going to change in the next five to 10 years.”

Jonathan Grzybowski, founder of the Camden startup Penji, said he believes in the power of community voices expressed through digital channels.

In the wake of the Parkland shooting, he praised students for taking their causes into their own hands on social media.

“People in politics aren’t doing enough,” Grzybowski said. “Congressmen and women, they’re not listening to the people. They’re on their own agenda, and their own course. You should at least be listening and having conversations like this.” 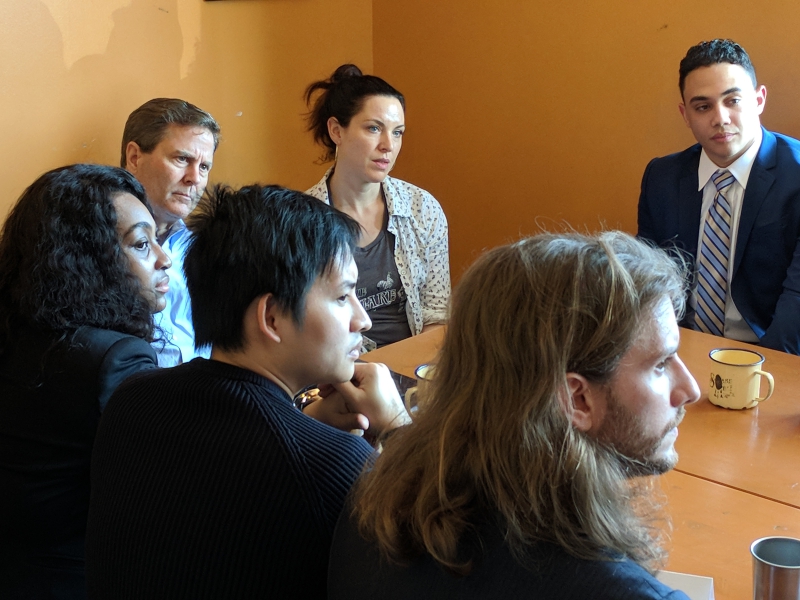 “I really want to see youth engagement in community, and I’m scared that if we don’t do that, the next generation of politicians aren’t going to either,” Barrett added.

Rutgers-Camden student Sam Tuero said voters must keep the pressure on their legislators to ensure their representatives govern according to the needs of their constituencies.

For Tuero, no issue more reflects that than immigration.

A child of immigrants from the Dominican Republic, he fears for the safety of his classmates and friends who were brought to the country by their parents as very young children.

Many are in legal limbo under the prosecutorial discretion granted them by the Deferred Action for Childhood Arrivals (DACA) policy, which is buried in Congressional gridlock.

“There’s a lot of anxiety,” Tuero said. “You’re going to school, you’re working; you were told whenever you signed up [for DACA]  that you trusted that the government was going to follow through with their promise to find citizenship.

“The thing that we can do is show them that yes, we’re educated, yes, we’re behind you, and you don’t have to feel like that,” he said.

“That’s kicking ourselves in the face,” he said. “America needs these people to prosper; they’re here, let them be here.” 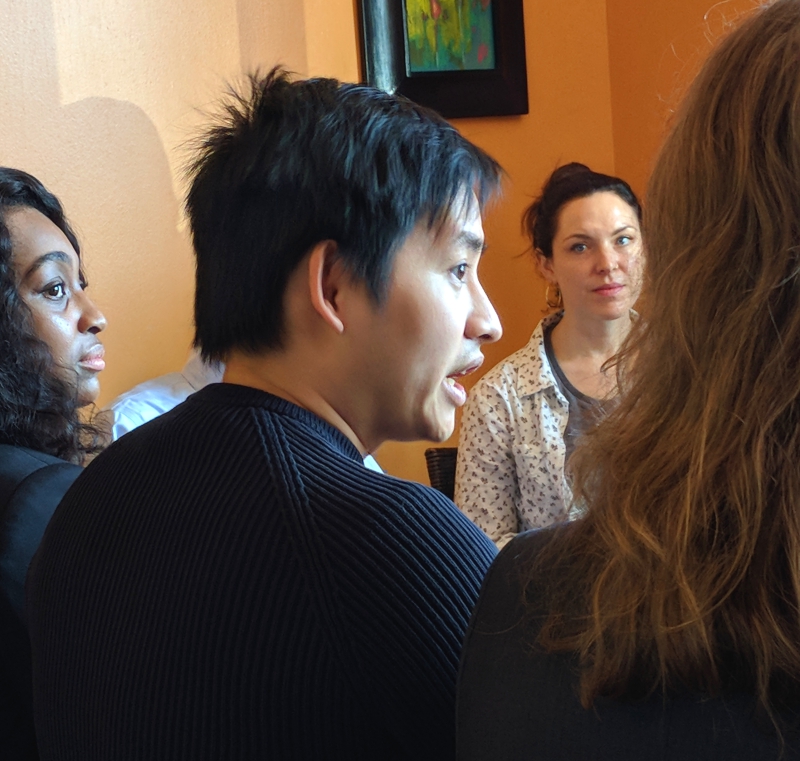 Tran said that American immigration and foreign policy under the Trump administration has forced him to question what it means to be an American abroad.

In a trip to Vietnam, his country of ancestry, Tran said he no longer feels the sense of security his American citizenship once provided.

“We come from a third-world country where we’re not protected from our own government,” Tran said.

“Recently, for the first time ever, when someone asked ‘What are you?’, I was more compelled to say ‘Vietnamese’ because that was safer than saying, ‘I’m an American.’”

Many at the table bemoaned the financial hurdles they face trying to get their careers underway.

Square Meal owner Jackie Walther said working as a public schoolteacher afforded her a pension against which she could borrow to establish her business. But she was frustrated that to build the career she wanted for herself required investing in a secondary, full-time career.

“You can’t borrow money if you don’t have money,” Walther said. “I have to work full-time and hustle on the side. You do what you can, but it’s not easy.”

Heyward said the financial issues that follow young people of color start in the public school system and increase in complexity throughout their higher education experiences.

“The public school system is not a free and fair setup,” she said. “When you go to college, you feel as though you have to work twice as hard, ten times as hard, as someone else.” 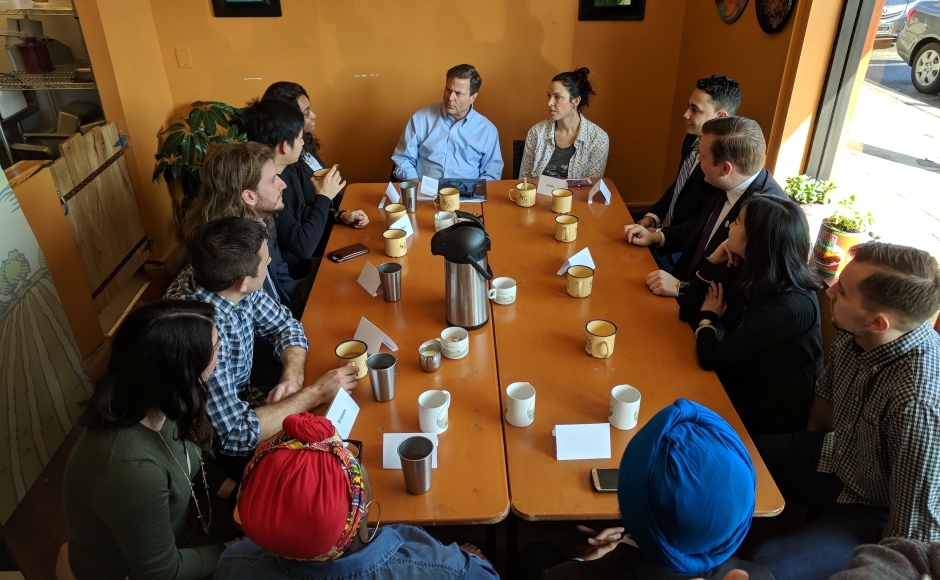 Tran argued that student debt could be eliminated altogether if employers stopped requiring advanced degrees from their new hires.

“The root of this is the employers.”

Finally, many in the discussion worried about the need for greater civic equity.

Melissa Le of Waterfront Lab said the chief aim of her organization is “to really figure out how our network of startups and businesses can set an example for social consciousness.”

“I am the quintessential definition of white privilege,” he said. “I hope that other people, when they listen to these conversations… that they’re not hiding behind a desk anymore. That they’re going out into the community and providing access to those who may not look like myself.

“If people like myself aren’t giving access to people who don’t have resources, I think that’s a shame,” he said.

“Everybody’s in their own silo,” said homemaker Ingelle Gonzalez. “We need to break down these walls, because there’s power in numbers. We have to step outside of ourselves.”

Norcross offered encouragement to those at the table while acknowledging the difficulty in moving national agendas forward in a partisan political climate.

“It’s easy to prey on those who are susceptible to this,” he said. “It’s easy to blame the other guy than it is to turn it on yourself and say, ‘What part do I play on this?’.

“This is a marathon, it’s not a sprint,” Norcross said. “We don’t need a wave, we just need a ripple that runs through the entire country. That will change things.”