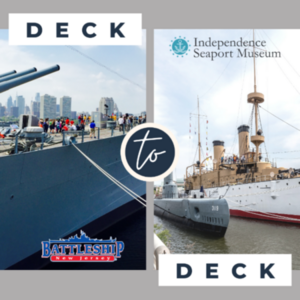 Join Battleship New Jersey and Independent Seaport Museum for Deck-to-Deck Tours, where visitors explore over 100 years of naval history and ingenuity up close through guided tours of three of America’s most remarkable ships, The Battleship New Jersey, Submarine Becuna, and Cruiser Olympia. Light Refreshments will be provided prior to the tours at Independence Seaport Museum.

The Battleship New Jersey is America’s most decorated battleship, and it was launched on the first anniversary of Pearl Harbor. Submarine Becuna is a Balao-class submarine that served during World War II and the Cold War. Cruiser Olympia is the oldest floating steel warship in the world and rose to prominence as Commodore George Dewey’s flagship during the Battle of Manila Bay in 1898.