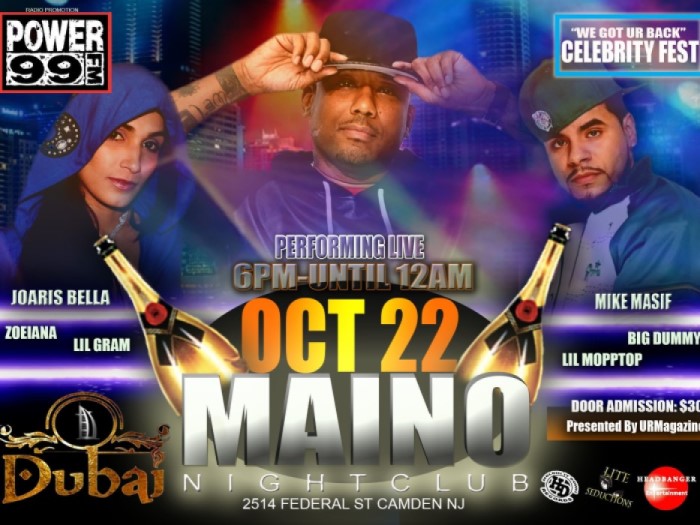 Joaris Bella and Mike Masif are coming to Dubai Nightclub located on 2514 Federal Street in Camden to perform alongside hip hop artist Maino at the first annual “We Got UR Back” celebrity fest on October 22nd, 2021. Maino is known for hits such as “Hi Hater” in 2009 and “All the Above” ft. T-Pain in 2016 which went platinum by the end of that year. In 2015, Maino recorded “Crazy” with Erika Jayne which resulted in a number one dance hit in the USA.

Joaris Bella and Mike Masif are known for films such as “The Account” released in 2020 on Amazon Prime and “Hood Life” released free on YouTube in 2017. Both movies were written and directed by the couple. They are also the founders of UR Magazine (United Resources Magazine), a locally based magazine in which small business and artist alike can place ads and get the word out.

Things really kicked off for the power couple when they debuted a single “Money, Money” on Q102 & 98.5FM hosted by Fat Joe himself naming the artists the King and Queen of Camden. Since then they have been featured on local TV shows like ‘The Plug’ with Syesmind and “Ponte en Onda” with Miguel Arriaga. They have also been interviewed by LA Mega 105.7FM, Uptown Radio 98.5FM, La Supra 97.1FM, and TNT 2Real Radio Show and were issued a Certificate of Special Congressional Recognition by Congress man Donald Norcross for their outstanding and invaluable service to the community. They are currently in the works to release their first new album together entitled ‘Hip2Pop’ which is anticipated to drop in 2022.

“We got UR back” celebrity fest will showcase many new artists from South Jersey, Philadelphia, and Camden, including Lil Gram, Lil Mopptop, Zoeiana and Camden NJ native Mont Polk (Known as Big Dummy). In the building will be professional actor Tommy Brown, known for his roles in “Underground Kings” ft. Christopher Mann, “Creed 2,” “Lyfe Jennings Story,” “The Account” released in 2020 on Amazon Prime, and Netflix film “Jennie,” Headbanger Entertainment, Power 99FM, Holding it Down Records, Lite Seductions Entertainment and many more.

“We got your back” celebrity festival is here to bring the entertainment industry to South Jersey in a major way.