Trending
You are at:Home»People»Desperation, Uncertainty Make Immigrants Targets for Scammers

Pressured by circumstances, short on resources, and fearful of government agents, undocumented immigrants can become victims of notario fraud, a scam that may damn their chances at citizenship.

To attorney Jeff DeCristofaro, the story of the American immigrant in 2017 is the same one his grandparents and great-grandparents would have told when they arrived in the United States from Italy.

“Let’s make a better life for ourselves.”

“They want to come, they want to work, and they send money home for a better life for their kids,” DeCristofaro said.

But conditions for immigrants are vastly different today than they were for prior generations—so much so that the ancestors of many Americans would not have qualified for citizenship under today’s regulations, according to the nonprofit American Immigration Council. What hasn’t changed, however, are the types of circumstances foreign-born people are seeking to escape.

In places like El Salvador and Guatemala, they may be weary of gang violence that outstrips the rule of law. In South America and Asia, they may be seeking to provide critical financial support by sending home U.S. dollars that are stronger than the local currency. In Africa and the Middle East, they may be refugees of military conflict, authoritarian oppression, or religious intolerance.

And if they come to America without following a complex and costly process, they may be here illegally. 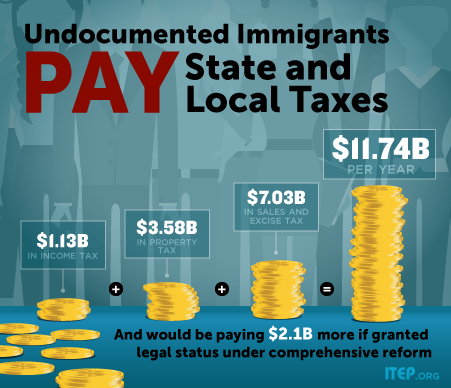 Undocumented immigrants pay nearly $12 billion in state and local taxes, according to the Institute on Taxation and Economic Policy. Credit: ITEP.

According to the Pew Research Center, the United States is home to an estimated 11 million undocumented immigrants.

As many as 500,000 may live in New Jersey, accounting for about 5 percent of the total population of the state, and paying an estimated $587 million in state and local taxes.

(According to the Institute on Tax and Economic Policy, that figure could rise to $658 million in New Jersey alone if immigrants were granted full legal status.)

Despite these contributions, the mixed citizenships of their families (which commonly include U.S.-born relatives and children), and the fact that national crime rates have fallen even as their numbers have increased, undocumented immigrants are easy targets for crimes related to their legal status. One of the most common of these is called notario fraud.

Notario is Spanish for “notary,” and describes a professional—a notario publico—who may have legal powers similar to those of an attorney in many Spanish-speaking countries. In the United States, however, only licensed attorneys are authorized to file immigration paperwork on behalf of individuals applying for legal status. The cultural distinction stymies many people in need of help, DeCristofaro said.

“They understand that if you’re going before a judge, you need a lawyer, but folks who aren’t in trouble think [notarios] can file paperwork and send it to an office,” he said. “In their world, you can have a notary do it.” 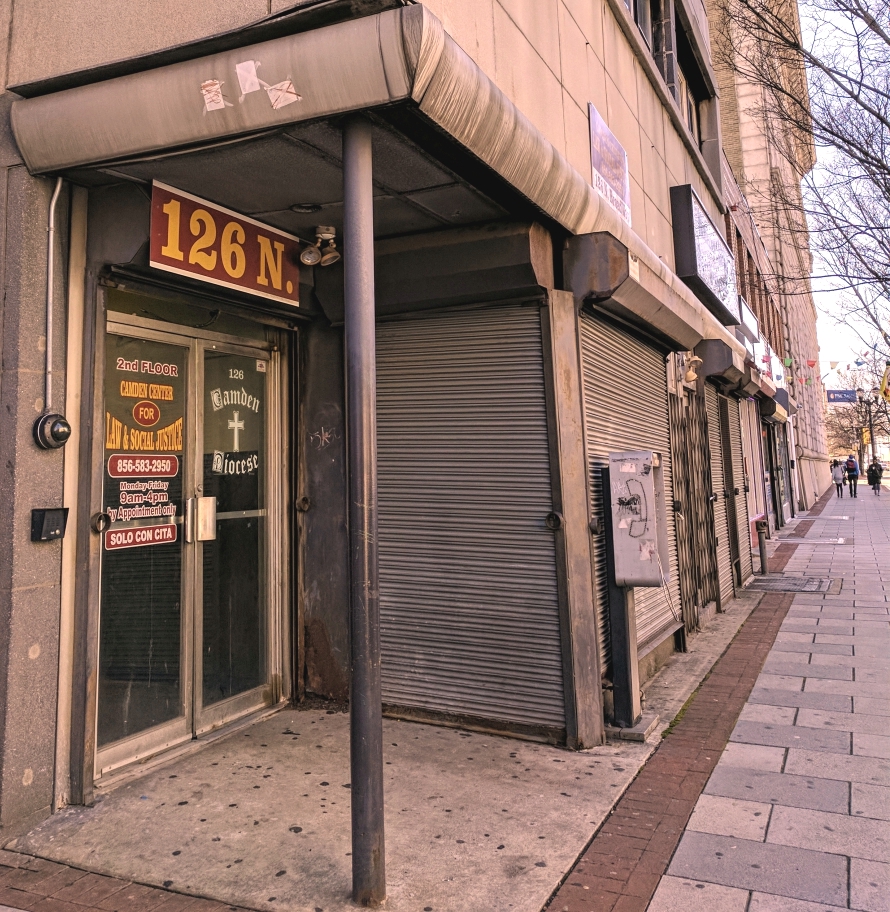 For the past 11 years, DeCristofaro has worked with the nonprofit Camden Center for Law and Social Justice, assisting low-income residents with their legal issues, including immigration questions.

The Center fields some 3,500 to 4,000 inquiries annually, and makes in-person contact with about 2,000 of those, DeCristofaro said; demographically, he estimates that about 90 percent of its clients are Hispanic.

In the current political climate of immigration crackdowns, many people whose legal status is in doubt won’t even visit the offices of private attorneys for fear that immigration agents will be waiting for them, he said.

Instead, many turn to people within their communities who may not be legally capable of helping them, but who will take their money all the same. Notarios often set up shop as travel agents, tax preparers, or legal aides, and may not hesitate to lean on their common cultural heritage when working with people at risk of deportation.

The painful reality, however, is that filing immigration paperwork incorrectly with the U.S. government can deeply complicate an applicant’s case. Even when things are progressing smoothly, immigration can be a years-long process. It’s not uncommon for files to get lost, or for the government to ask for documents that have already been submitted. Sometimes even when visa approvals come through, if federal quotas have been hit, applicants are out of luck, or are placed on interminable waiting lists. 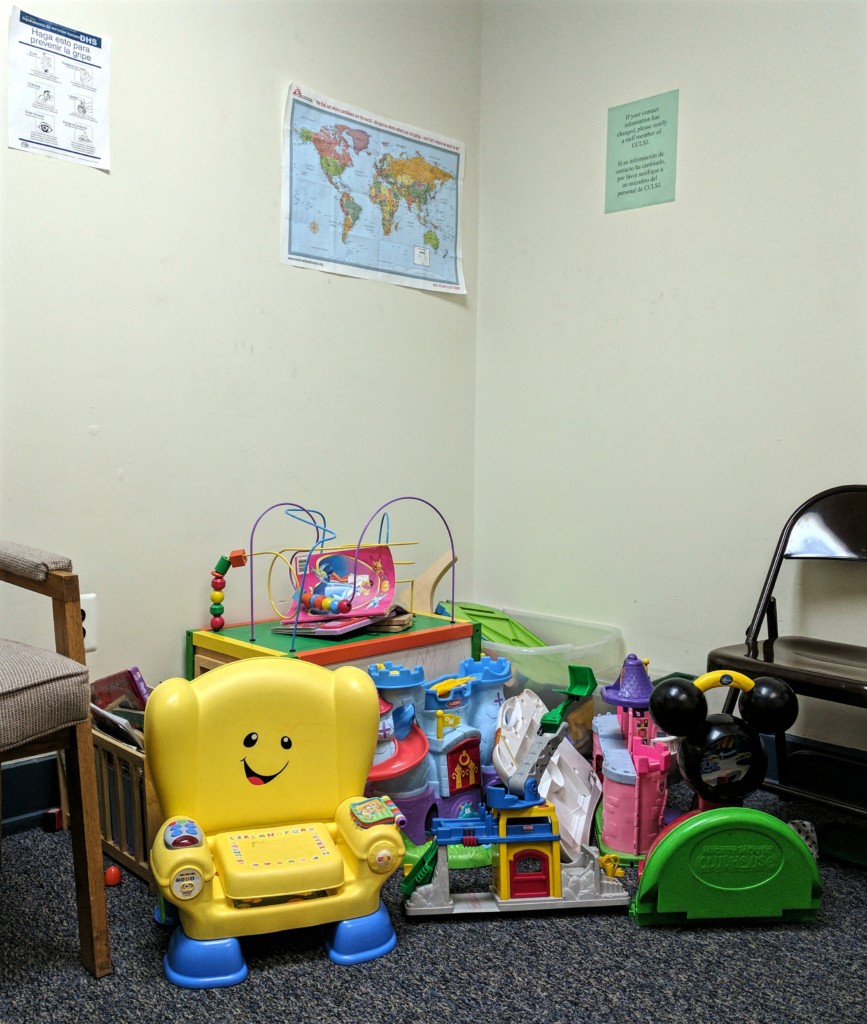 The waiting room at the Camden Center for Law and Social Justice is filled with children’s toys, a reminder of the families whose lives are at stake with their legal statuses. Credit: Matt Skoufalos.

Notarios may offer false hope, telling their clients that they have insider information or access to special personnel who can expedite an application. In other instances, they may lead a client to believe that there is some relief available when none truly exists.

The comfort of a such a lie can be more dangerous than the implications of the truth, which makes it more difficult for DeCristofaro to deliver bad news in comparison.

“You’ve got folks who have been living here, many of them working and paying taxes legally,” he said. “But for the permission, they’re doing everything else legally.

Some of DeCristofaro’s clients may be under orders of deportation for minor crimes, like traffic violations, or for working without the proper paperwork. Yet even if they’ve run afoul of the law, they may have some legal options that people who are under deportation proceedings do not. But if they fear going to a legitimate legal resource because they’re afraid immigration agents are lurking, they’ll turn to a notario instead.

“When you’re underground and you feel that you should be underground, that’s when you start going to these underground folks,” DeCristofaro said. “That’s the type of fear you’re in.

Some of those victims “just flee into the shadows,” never reporting how they’ve been victimized because of that fear, DeCristofaro said. They may just pack up and move somewhere else to live anonymously. 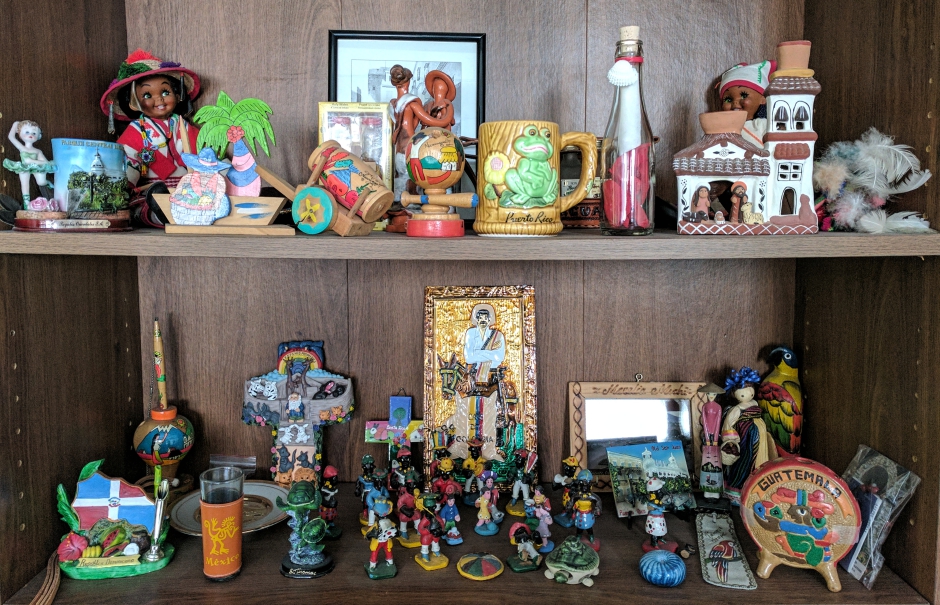 At the Camden Center for Law and Social Justice, shelves of gifts from past clients serve as reminders of the lives they’ve aided. Credit: Matt Skoufalos.

Notario fraud is punishable by a $10,000 civil penalty from the New Jersey Division of Consumer Affairs, but more often than not, violators aren’t reported because their victims lack the nerve to do so.

But in Pennsylvania, attorney Vanessa Stine is tackling the problem through The Notario Fraud Project, a program sponsored by the nonprofit Friends of Farm Workers, which provides legal assistance to low-wage, immigrant workers.

Stine’s is the only project in the state focused on providing legal representation for victims of immigration fraud, helping those who have been defrauded to get their money back.

“It’s an access to justice issue,” Stine said. “There’s not enough legitimate, trustworthy [legal]assistance; because of that, people end up being defrauded. It’s a question of resources.”

Red flags for notario fraud may include too-good-to-be-true offers, guarantees about the legal outcome of a case, pressure to pay up front, not explaining for what service the payments are needed, or sending correspondence to the notario instead of to the applicant.

Stine discusses the potential risks and opportunities of each case with her clients. Sometimes she’s able to file a consumer complaint on their behalf; other times, a demand letter will get them a refund. In two instances, she’s helped obtain permanent injunctions against notarios. Even when there are no civil remedies available, sometimes cooperating with authorities can help a victim of fraud in his or her deportation defense.

“I’ve had clients who are deported and are seeking justice from their home countries,” she said. “Sometimes you can’t stop the removal, but you can hold whoever it is accountable.” 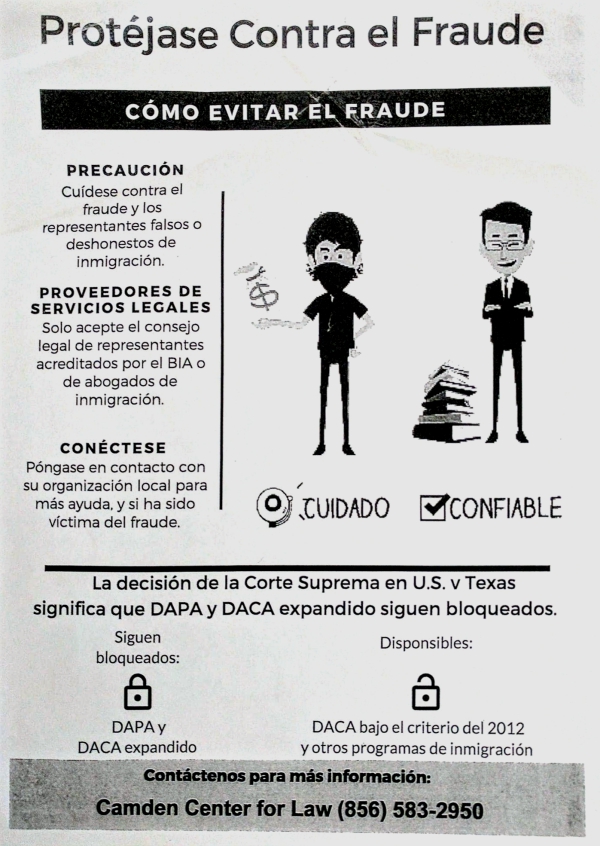 Flyer describing how to distinguish between a notario and an attorney. Credit: Camden Center for Law and Social Justice.

Things only get better if people speak up, but some victims of notario fraud never learn the outcomes of their cases: if they’re deported without a family member staying behind in the United States, there may be no way for word to reach them, Stine said.

Victims of notario fraud aren’t confined to those whose immigration status is in question, either.

Lawful permanent U.S. residents who are trying to become citizens through legal means have been affected by notario fraud, and so have their families.

It’s no different from any other kind of consumer scam, and takes advantage of “people’s lack of information and at times their desperation to get right with the law,” Stine said.

“The harm is not isolated to people who don’t have immigration status,” she said.

“The harm affects everyone in our community.”

This story was funded by a grant from the Center for Cooperative Media at Montclair State University as part of its In the Shadow of Liberty: Immigration in New Jersey project.