Trending
You are at:Home»Government»Camden County»Eleventh-Hour Push to Save Cooper River Park Walking Bridge

Petitioners led by Haddon Township resident Thomas S. Turcich are asking why the functional, warrantied structure has to come down at all. 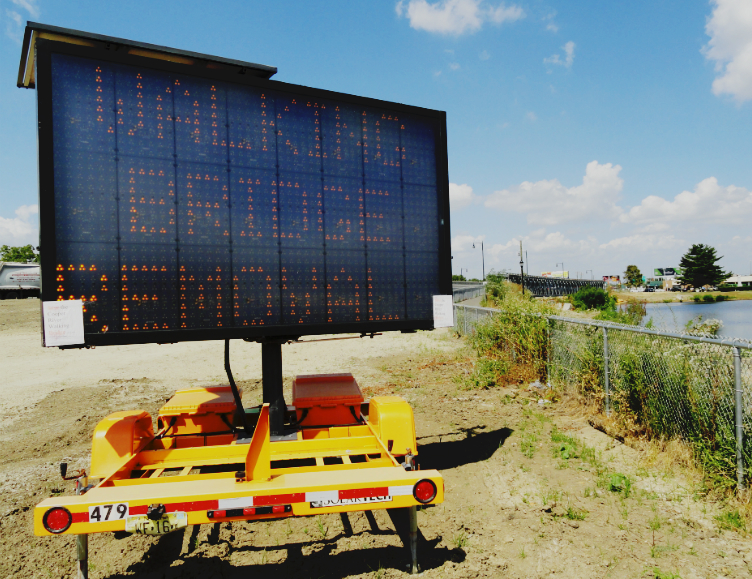 It’s hard to end a three-year relationship when you think there’s still something left.

But for Haddon Township resident Tom S. Turcich, the idea that the Cooper River Park pedestrian bridge should be decommissioned isn’t just a nostalgic objection.

Installed during renovations of the Route 130 and Cuthbert Boulevard bridges as a way to offer uninterrupted access to the walking trail that lines the park, the bridge is slated for removal September 18.

As one of its daily users, Turcich (the father of World Walker Tom Turcich) said the bridge provides a higher quality of experience in walking through park that is the centerpiece of the Camden County system, and he’s petitioning to keep it.

“I don’t think there’s anything [required to keep it in service]but a little bit of paperwork [from the state],” he said.

But authorities from agencies like the New Jersey Department of Transportation (NJDOT) and the Department of Environmental Protection (NJDEP) have deemed it a temporary structure, and therefore one unsafe for long-term use. With the roadway project nearing its end-October completion date, officials said there’s no longer a need for the stainless-steel span. 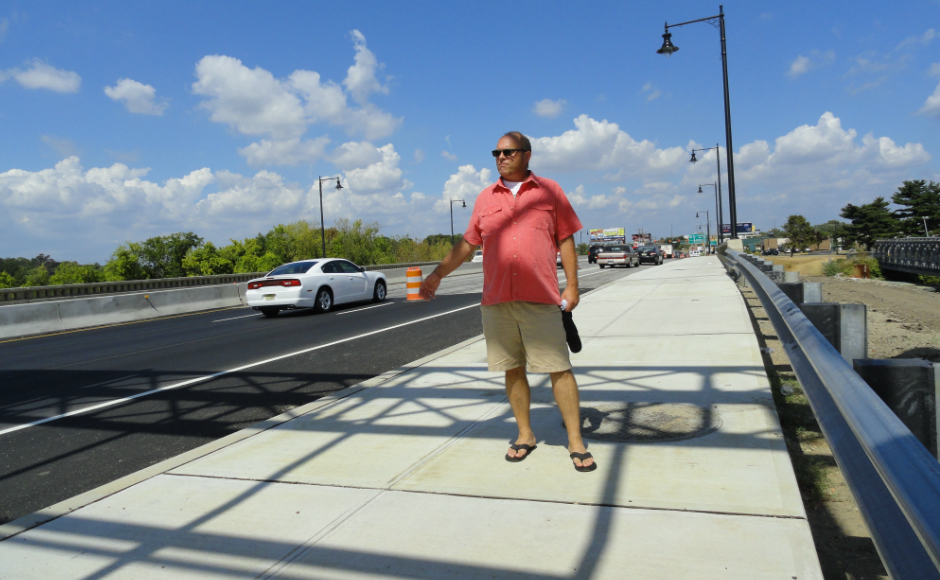 Yet Turcich balks at the idea that the existing bridge is unsafe, unnecessary, or that the cost of its de-installation is essential to the project. He said park-goers he’s encountered find traveling the bridge preferable to using the Route 130 sidewalk.

Women who jog the loop have told him they’re insulated from the catcalls of motorists; pedestrians and cyclists are that much farther removed from the smells and sounds of vehicle exhaust from the roadway.

“Everybody in the park says this makes it so much nicer,” Turcich said. “While we’re at it, put one of these up at Cuthbert. There’s no barrier [from the highway]on either end.”

Turcich also bristled at what he perceives as the senseless waste of paying to de-install a well-liked and well-functioning public asset.

“We the taxpayers have to pay [project contractors]South State, [Inc.] to take out that bridge,” he said. 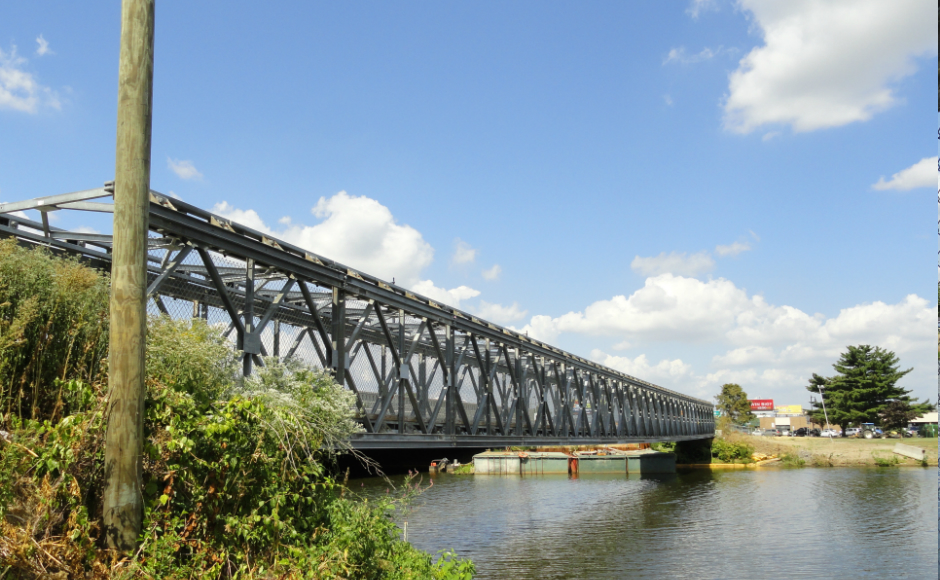 Despite NJDOT designating the bridge a temporary structure, a source close to the project, who spoke on condition of anonymity, said it is warrantied by Mabey, its manufacturer, for 30 years, and is far more resilient than that temporary label implies.

“In order to get their DEP permits, they say it’s temporary, but they never would design it to be temporary,” the source said. “It’s ridiculous to take this bridge down.”

Even aside from the cost and traffic complications associated with bringing in heavy equipment vehicles to remove it, once de-installed, the bridge could be returned to Mabey for a partial refund, scrapped for a few hundred thousand dollars, or simply relegated to a storage yard. If, in the future, the county opted to build a comparable replacement bridge, that would be another multi-million-dollar investment .

Mabey spokesperson Julia Delligatti confirmed that the bridge was originally a rental, and now is owned by South State. 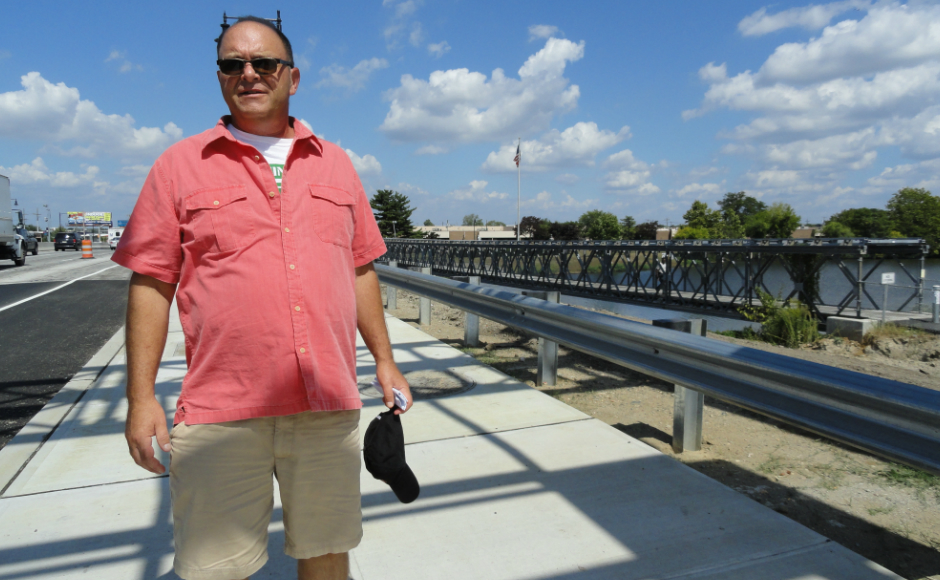 Delligatti said that although the bridge is structurally sound, “it’s not the steel” that’s at issue.

“It’s how the bridge was built and their intentions for it,” she said. “When we supplied the bridge, the contractor did the abutments with the New Jersey Department of Transit. They have a combined responsibility for it.”

Mabey bridges are used often in temporary applications, but Delligatti said that this is the first time she’s heard “that people love the bridge so much.

“But it’s a unique use of a pedestrian bridge,” she said.

NJDOT Spokesperson Daniel Triana said that although the $25.7-million, federally funded project won’t wrap until the end of October, the revamped Cooper River Bridge—the one that carries traffic along Route 130—is already open to bike and foot traffic.

With wider, 12-foot pedestrian sidewalks and an 8-foot bicycle shoulder, the roadway is designed to handle any load the temporary bridge would have seen and more, Triana said in an e-mail.

“[The steel bridge] was built to provide a means of access over the river during construction,” he wrote. “Building a separate permanent pedestrian bridge would be both costly and unnecessary” after having spent the time and money to improve the existing structure, he said. 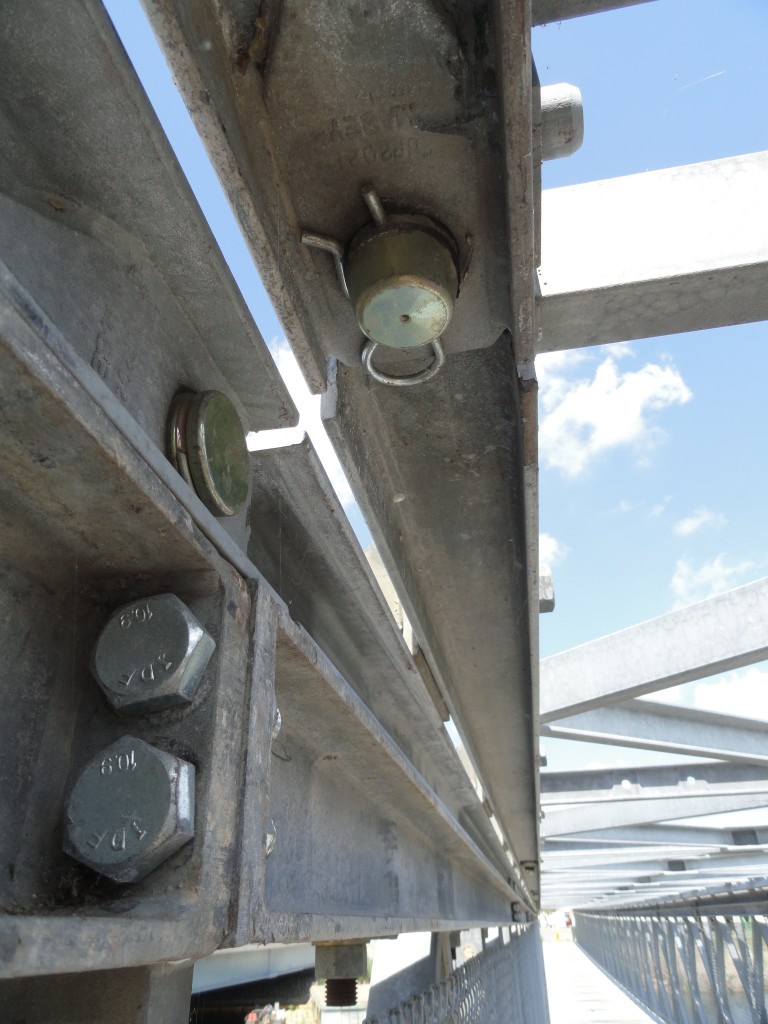 Camden County spokesperson Dan Keashen said that representatives from the county have approached state agencies to ask about preserving the temporary bridge at that site, and were told that the structure was only approved by the New Jersey Department of Environmental Protection (NJDEP) for a conditional permit because of its potential environmental impact.

“I don’t think anybody would dispute that the amenity itself is an asset to have away from the highway, and to have a more insulated walkway over the river,” Keashen said. “But the DEP granted access and permitting based on the fact that it was temporary.

“It’s not something that we wouldn’t want to explore, to get a permanent permit from DEP,” he said. “DEP does have very stringent restrictions around waterways, particularly right on the banks of waterways.”

Camden County Freeholder Jeffrey Nash said in a statement that “the parks department would be amenable to exploring opportunities to build a span in the area if it was feasible and the DEP would permit it.”

Keashen also pointed out that even if the bridge were warrantied for a 30-year lifespan in its current incarnation, the county would bear the liability for a temporary structure, “and I don’t know that anybody has the appetite for that.

“We would want something designed to last 100 years, not something with a warranty for 30,” he said. “There’s a ton of work being done, and even the new bridge is an improvement to what certainly was there.”

According to Triana, remaining work on the project includes “landscaping, walkway reconfigurations, and park lighting,” in addition to the de-installation of the bridge.