Trending
You are at:Home»Arts»15 Minutes and 5,000 Years: Haddonfield Native Fights to Preserve Global Traditions in Glass

Glass artist Ted Clark has trained with Muranese masters to cultivate a 5,000-year-old tradition of craftsmanship threatened by rising utility prices and a lack of sustaining support. 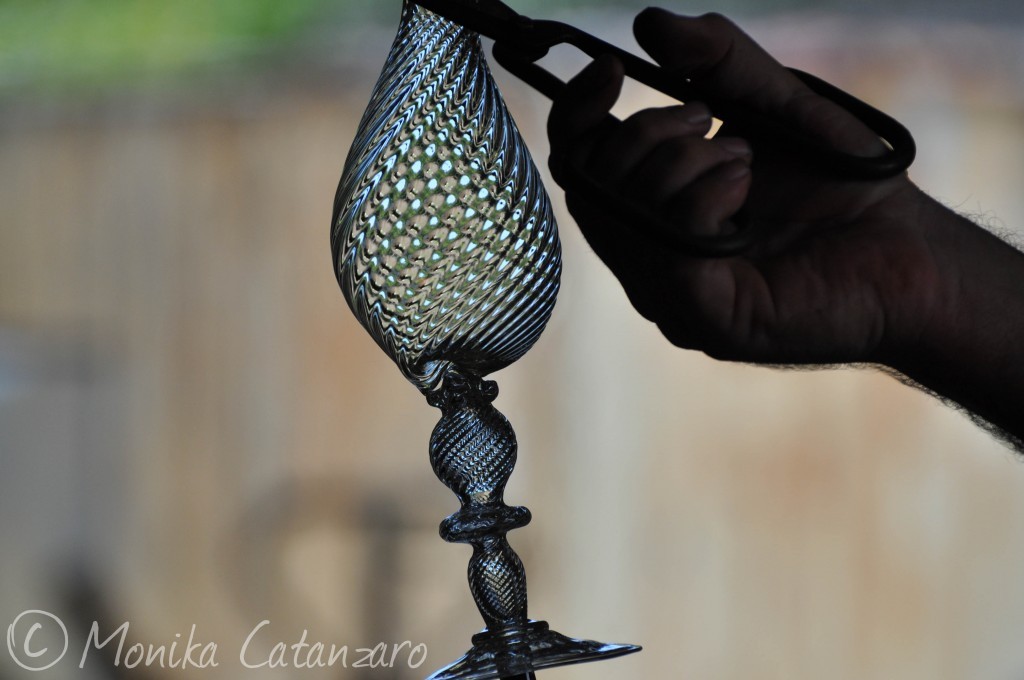 When people would ask master glassmaker Elio Quarisa, “How long does it take you to make this cup?” his answer was, “about 15 minutes and 75 years.”

Edward “Ted” Clark, who apprenticed with Quarisa, counts the number as closer to 5,000 years, taking into account the progenitors of families who gathered their villages around the fires they used for cooking, heating, and eventually crafting glass.

“Without any of that history, we don’t have it,” he said.

The invention of the drinking glass “revolutionized the process of manufacturing anything in the world,” Clark argues.

Quarisa was one of a trio of Muranese master glassmakers—maestros—under whom Clark studied, a stemware expert whose work was commissioned by European royalty. At Corning, Clark worked with Pino Signoretto, a sculpture artist who has produced work for Salvador Dali and Dale Chihuly. Clark met the third of his maestros, Dino Rosin, at the Pilchuk Glass School in Seattle; Rosin’s collaborators famously included Pablo Picasso, Marc Chagall, and Jean Cocteau. 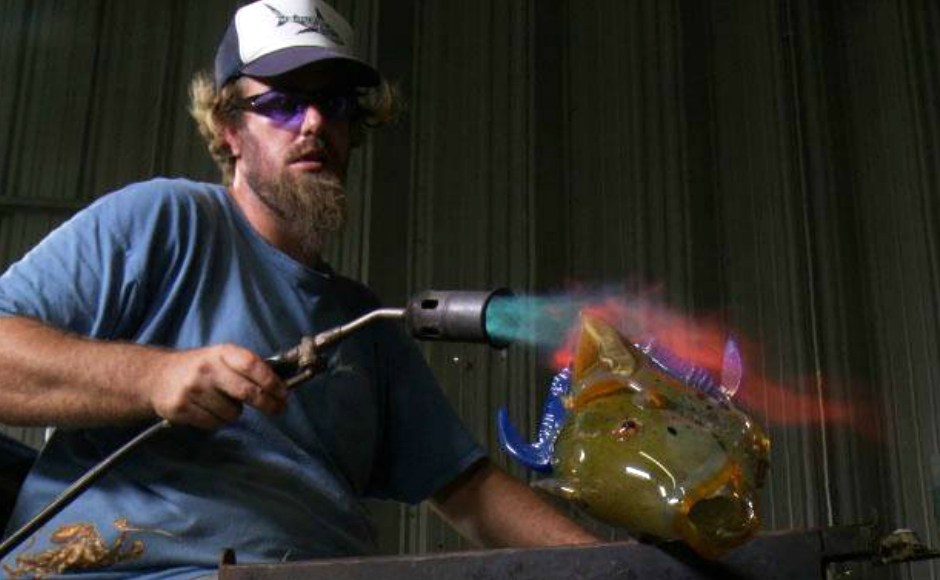 For generations, if any glassworkers of their ability had left Murano to share its traditions with outside apprentices, bounties would have been placed on their heads. Instead, men like Quarisa, Signoretto, and Rosin reasoned that they must break with tradition to keep their art alive.

Where they traveled, they brought the knowledge of the ages to skilled apprentices who could build upon it; details like the lines that have underpinned the Roman bottle since the 1300’s.

“They were building a worldly community, and at a cost,” Clark said. “[Signoretto] would say that otherwise, civilization is wasted because it goes with you to the grave.”

The biggest downfall of the culture in which Murano glass evolved is the labor associated with the process. Furnaces take a week to heat up; works take days and weeks to cool down. Murano is an island, so everything must be imported, and the elevated cost of living there can be prohibitive. Children no longer enroll in glassmaking schools because they’re bound to tradition; factory work is difficult, and digital entertainment is easier. The maestros left to teach around the world “because they can’t find the line that they used to have,” and their plight is not unique in the glassmaking world, Clark said. 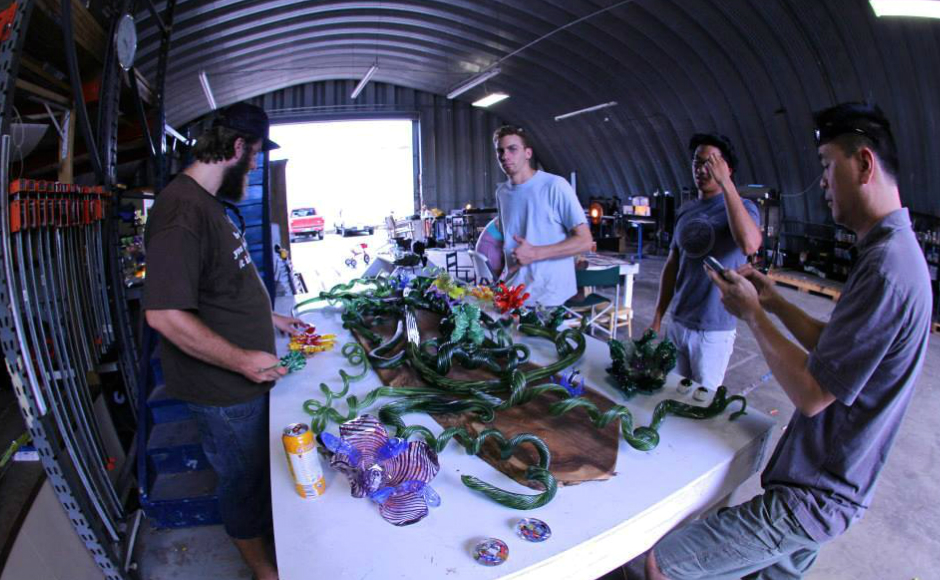 The Glass Arts Association of Hawaii, which Clark established, is in transition. Credit: Ted Clark.

“Here’s their vessel,” he said. “Here’s their livelihood. Shutting down the Steuben plant shuts down one era. Where did Tiffany go? Look at Wheaton around here and how it’s evolved and changed into promoting an education and arts center as opposed to being a glass factory.”

If there’s anyone who understands the challenges of sustaining glassmaking culture in its twilight years, it’s Clark, a Haddonfield native who moved to Hawaii to start his own glass factory more than 10 years ago. His experience has been full of lessons in resilience and reinvention as much as it has been steeped in generational techniques.

Clark started by learning how to make functional objects in the factory setting of his forebears; then he pressed into vessels and elaborate sculptures. With a degree in marine biology and ecology as well as in glassmaking, he would dive into the waters around Oahu for fish to cultivate in his home aquariums, observe their forms, and try to capture them in glass. 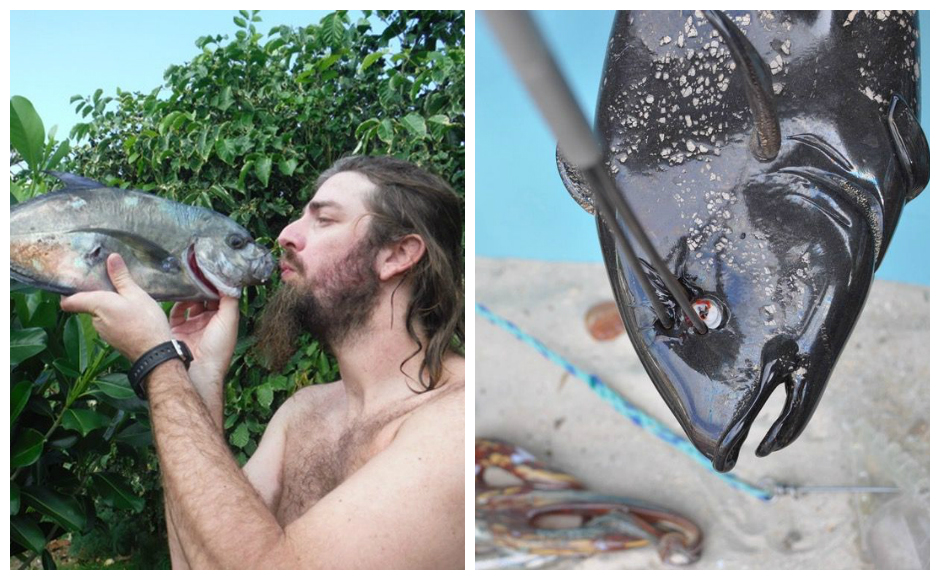 Clark poses with an Ulua he speared for food, and then recreated in blown glass (right). Credit: Ted Clark.

Soon spearfishing became a form of rehabilitative exercise for the back that he’d thrown out laboring in 2,000-degree fires; a way of introducing lean, fresh fish into his diet as well as into his gallery.

Recently, Spearfishing Omilu Ulua, an interactive exhibition of his work at the Honolulu Museum of Art, took visitors through a dive into the glass forms of an ocean’s worth of sea life, staged in gravel made from a year’s worth of scraps and leftovers from his shop.

But Oahu, like Murano, is an island, and the challenges of building a glass industry there, or anywhere, really, are related to cost and infrastructure. Clark estimates that as much as 95 percent of the sales of his work must be reinvested into the business, either in keeping a schedule of classes that opens his shop to the public for make-and-take events, buying new materials, or covering the costs of his utility bills. An expensive real estate market and a close-knit native culture that is mistrustful of outsiders are hurdles that are par for the course in Hawaii—and that’s before he even gets to finding the revenue and resources necessary to sustain a labor-intensive manufacturing business. 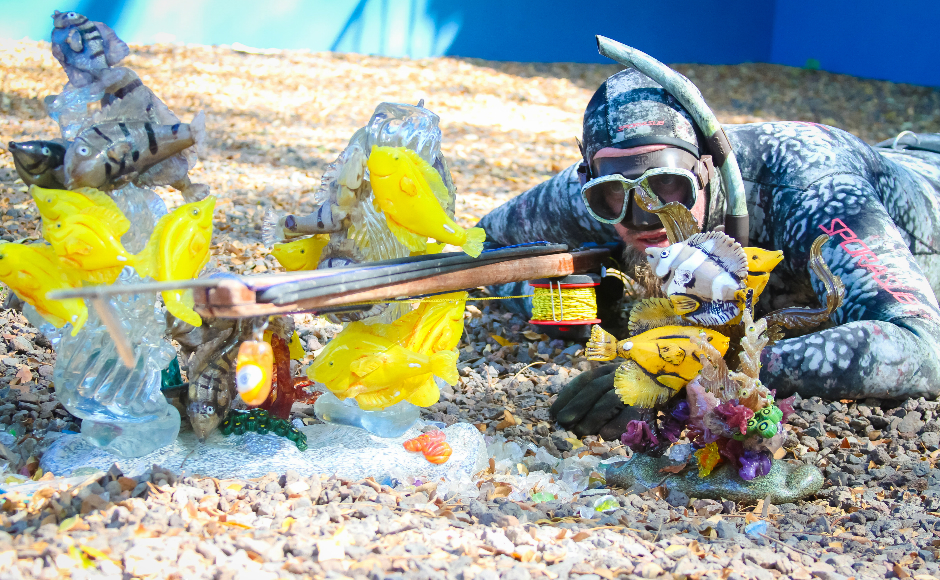 “The [sustainability]models that we have are very limiting,” Clark said. “We’ve got Pratt. We’ve got Corning, but they’re in combination with a museum and a factory and a town that has been a leading glass town in America for generations. Pilchuck in Washington state is a glass school that Dale Chihuly put together, but they don’t even pay for the rent [because they’re on protected land].”

Even when things are humming, it can be tough to make ends meet. Pratt’s glass studio was operating at more than 70 percent occupancy at the glass studio when Clark attended, but “wouldn’t be able to survive without the fundraiser every April just to pay the heating bill for the furnace,” he said.

Without larger, sustaining patrons, like corporate sponsors and individual contributors, and without years of standing in the eyes of gatekeepers at the National Endowment for the Arts, building a pipeline for glass arts and education will be another deep dive for Clark. He’s back in Haddonfield this week to visit family, and is hosting a show of his work at the Markeim Arts Center from 4 to 7 p.m. Sunday. 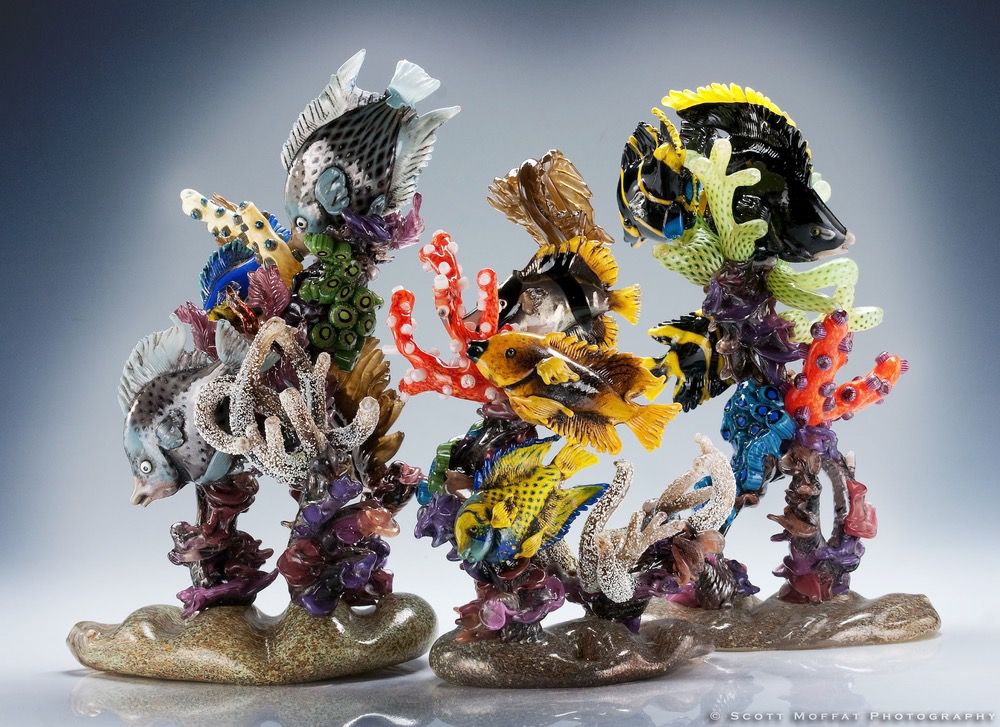 For local patrons of the arts, the event is a chance to meet someone who connects modern techniques to ancient traditions. For Clark, it’s an opportunity to talk with the public about the centuries-old practice that he’s working to preserve and its inherent connection to the local arts scene that inspired his own upbringing.

“What’s hard and what’s real and what’s possible are all different answers,” Clark said. “Fail 1,000 times and maybe it works. Either way it’s back to the process.

“Is it the object at the end that I care about?” he said. “I don’t know. Sometimes I do, sometimes I don’t. But man, it’s sure fun doing it along the way. Otherwise, it’s real fun throwing it in the bucket.”