To date, 80 Camden County residents have died from complications related to COVID-19. More than half were connected to a local long-term care facility, and the youngest was in his forties. 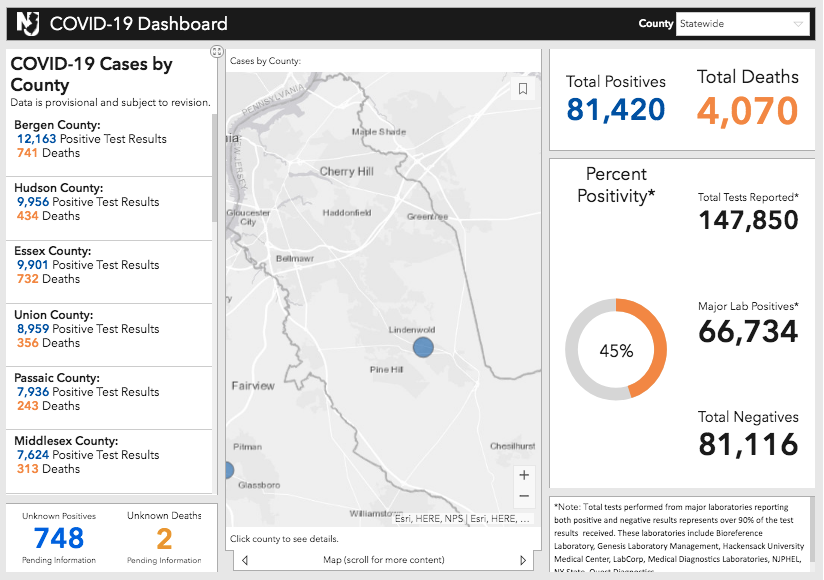 Twenty-two more Camden County residents have succumbed to complications related to novel coronavirus (COVID-19), and 100 more have been sickened by the virus, the Camden County government reported Saturday.

Their deaths date as far back as April 2, the county said, citing “significant reporting delays” from its three sources of death notifications: the county medical examiner, state electronic death records, and funeral directors.

According to the Camden County Health Department, 44 local resident deaths have been associated with one of the 56 long-term care facilities in the county, or 55 percent of the 80 total deaths. That’s higher than the statewide average of 40 percent cited by New Jersey Health Commissioner Judy Persichilli in Saturday’s state briefing.

It’s also four fewer deaths than Persichilli said on Friday had originated in 14 long-term care facilities in Camden County. On Saturday, Camden County Communications Director Dan Keashen told NJ Pen that the county medical examiner will be working with the state Department of Health “to compare metrics, and try to harmonize that number” over the weekend.

In a statement, Camden County Freeholder-Director Lou Cappelli said he was “at a total loss for words.

“The families impacted will be in our thoughts and prayers tonight and into the future as this pandemic grinds on,” Cappelli said. “We need to double down on our mitigation efforts so we can flatten the curve, and we need to work hard to flatten the curve of this virus.

“Even though the news is grim today, I believe our efforts are yielding real results,” he said.

The newest cases are: