Deaths announced today are of people who passed between April 12 and 30. Another 105 residents also have tested positive for the virus. 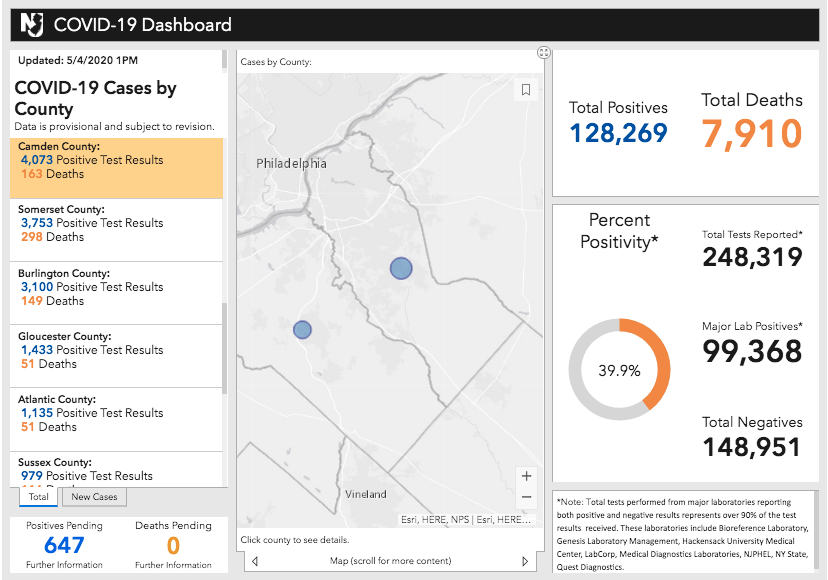 Another 48 Camden County residents have died from complications related to novel coronavirus (COVID-19), the Camden County government reported Monday, bringing the local death toll to 186 during the pandemic.

Those deaths announced Monday represented lives that had been lost to the virus from April 12 through 30.

The deceased hailed from 14 Camden County communities, and ranged in age from their 30s to their 90s.

They were among the 7,910 New Jerseyans to have lost their lives to COVID-19-related causes, and among the 128,269 people who have been sickened by the virus in total, Governor Phil Murphy said Monday.

Of the 3,542 local cases, 843 have originated in a Camden County long-term care (LTC) facility, or 24 percent. LTCs are believed to be associated with 125 of 138 total local deaths, or 67 percent. Nineteen of the 48 local deaths announced Monday were related to a COVID-19 LTC outbreak.

“We have reached a difficult stage in this pandemic, one where the mixture of positive and negative developments can make it difficult to tell just how much progress we are making,” said Camden County Freeholder-Director Louis Cappelli, Jr. in a statement.

“Rest assured, we are better off today than we were two months ago when this pandemic began,” Cappelli said. “Testing is more accessible than it has been at any other point, our hospitals are not overwhelmed with patients, and we have been able to reopen our parks that sat closed for nearly a month.

“Our means for fighting this virus have not changed, and the importance of exercising them has only been heightened,” he said.

“Stay home unless you must go out, do not attend or organize social gatherings of any kind, and wear a mask or face-cover while maintaining proper social distancing. Together, we will get through this and we will be stronger for having done so.”