The driver escaped the accident at the foot of the Betsy Ross Bridge but was transported to the hospital along with a firefighter. Nearby homes were evacuated. 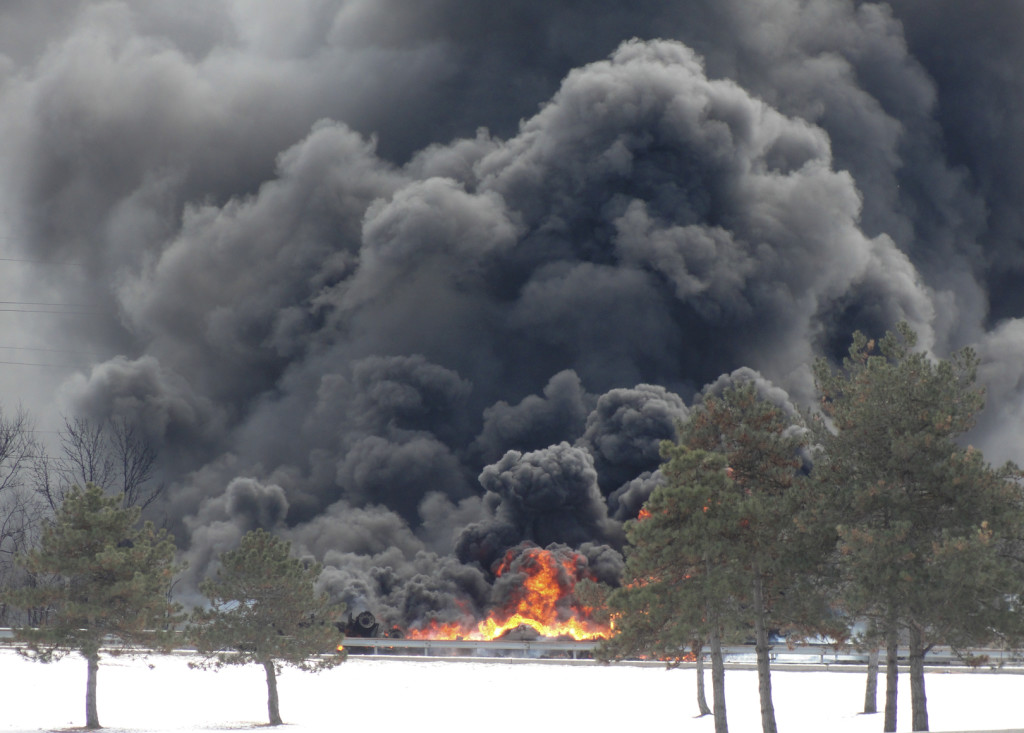 The driver of a tanker truck escaped with his life after his vehicle overturned and burst into flames on an off-ramp one mile past the Betsy Ross Bridge toll plaza, spilling 8,000 gallons of gasoline Monday morning.

Northbound traffic on the Route 130 ramp approaching the bridge via Route 90 west will be closed for at least the next 24 hours, fire officials said, as they work to remove some 200 gallons of gasoline that remained in the wreckage.

The single-vehicle accident occurred at 11:03 a.m. on the Route 130 exit ramp off Route 90 east, igniting a fire that hurled plumes of smoke into the sky, visible for miles around.

Some 150 firefighters from area companies throughout Burlington and Camden Counties worked to contain a flaming gasoline trail that rolled down the ramp and a nearby embankment towards neighborhoods within a few blocks of Union Avenue. 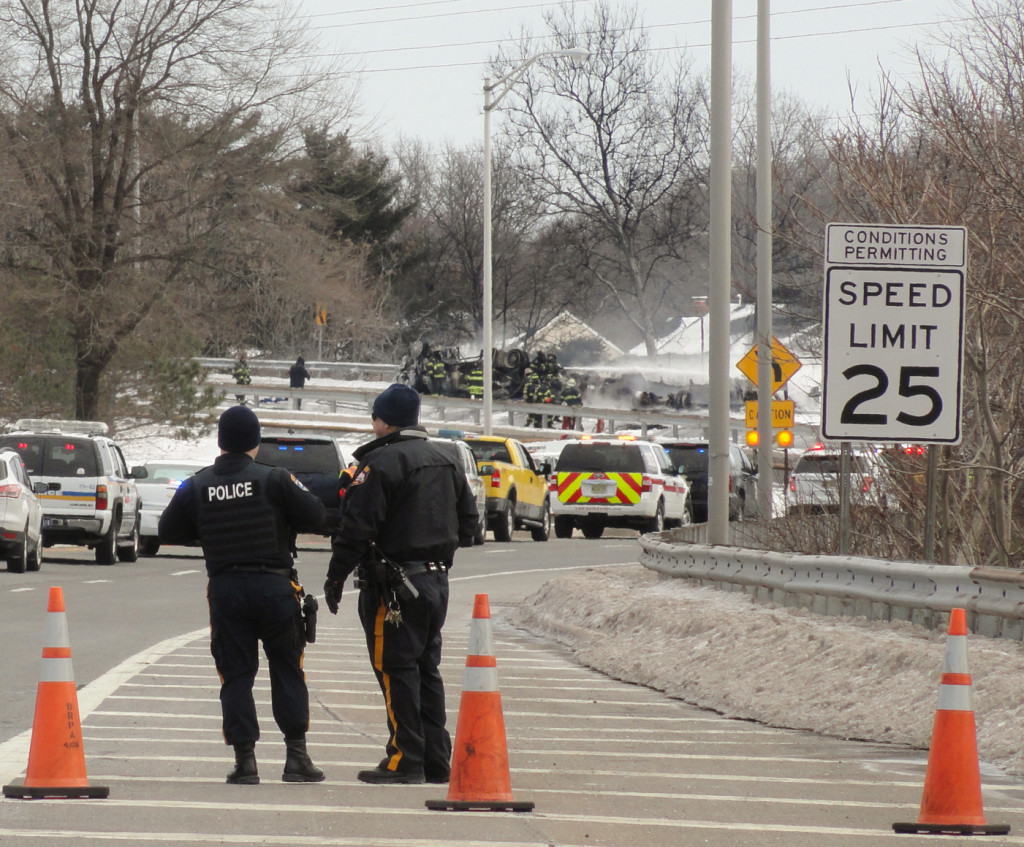 Residents in 30 homes from Greenbrier down to Wyndam Roads were evacuated as a precaution.

The driver of the truck was transported to Cooper Hospital with minor injuries, as was a Pennsauken firefighter, said Pennsauken Fire Marshal Daniel Kerr.

Within 30 minutes, companies had extinguished the fire, Kerr said, but some of the spill entered the nearby Puchack Run, an EPA superfund site that Kerr described as “a non-closed sewer system that feeds into the Delaware River.”

Kerr said that local HAZMAT teams said the gasoline has not entered the river itself, but said that the localized environmental impact of the spill “certainly will be significant and ongoing for quite some time.”

‘Not a commonplace thing’

Pennsauken Mayor Rick Taylor said that for his town, which is dissected by four major highways—routes 38, 70, 73, and 130—an accident of this magnitude thankfully “is not a commonplace thing.” 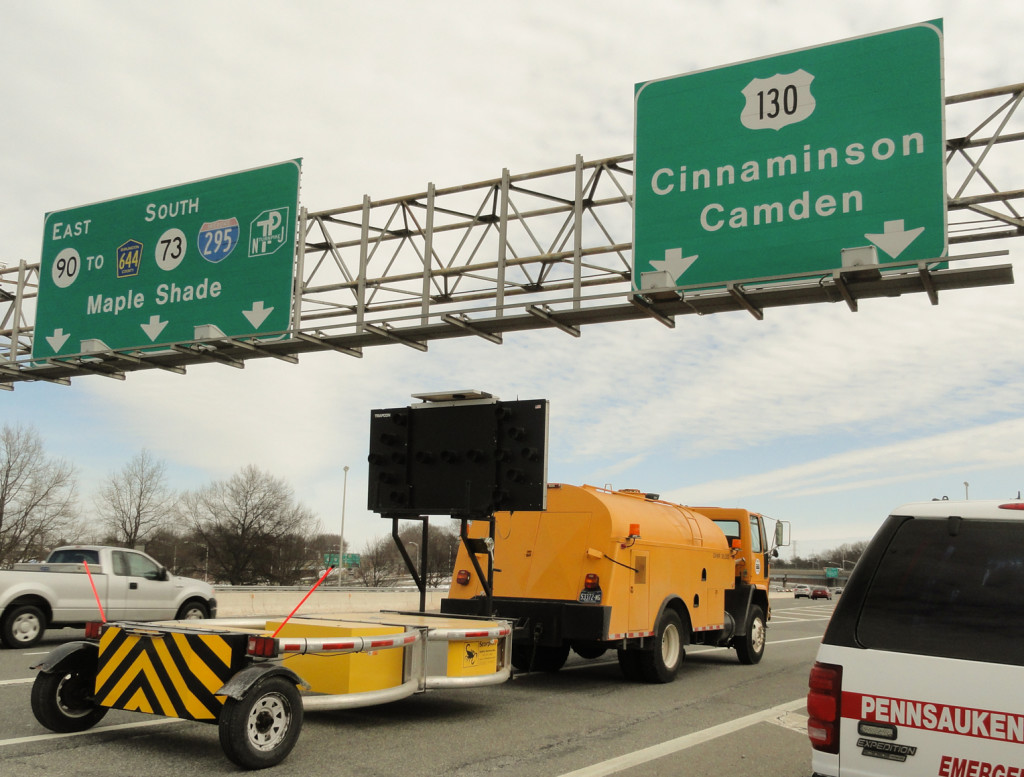 The accident occurred on the Route 130 offramp. Credit: Matt Skoufalos.

Taylor did recall a similar accident that occurred on the southbound side of Route 90 in which the driver was not as lucky as the man who escaped Monday’s wreck.

“I’ve never driven a tractor-trailer, but just negotiating these turns in a car, you have to be in control,” he said.

The mayor commended first responders from county to local emergency management teams for their handling of the incident.

“They have drills periodically, and certainly the fruits of those drills show when we have a situation such as this,” Taylor said.

Pennsauken Township Administrator Edward Grochowski similarly praised the efforts of local authorities in evacuating neighborhoods nearby and controlling the flow of traffic during the incident.

“We understand it’s an inconvenience, but it was done for their safety,” he said. “The fire department did a great job moving people around, and the police responded.” 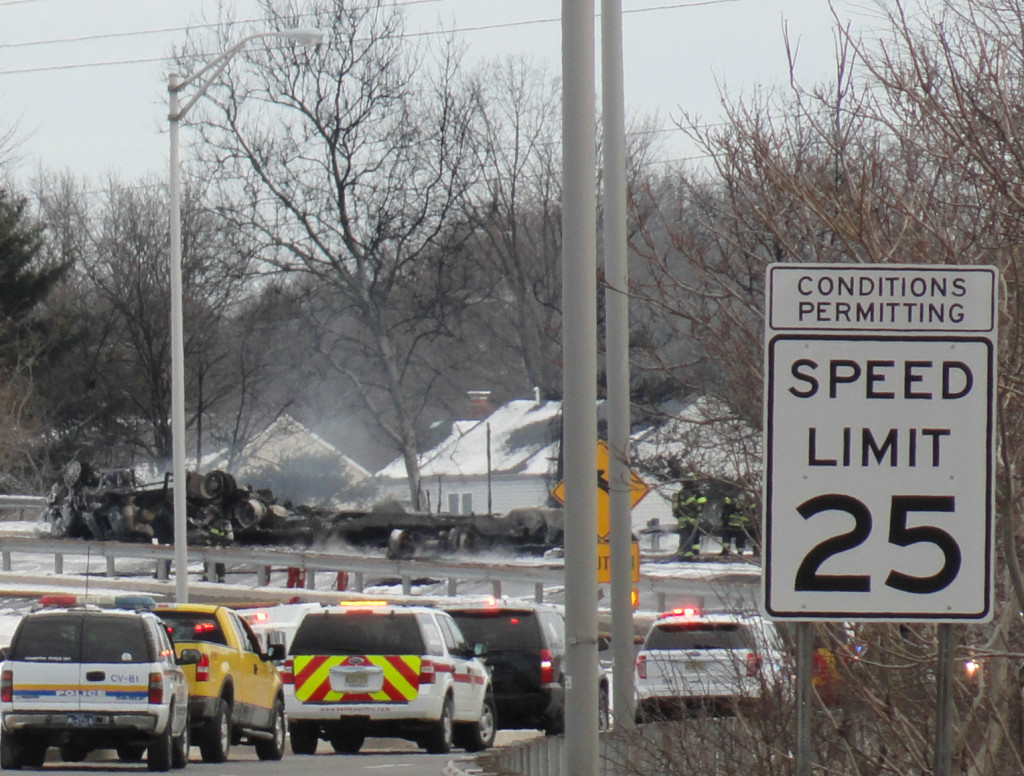