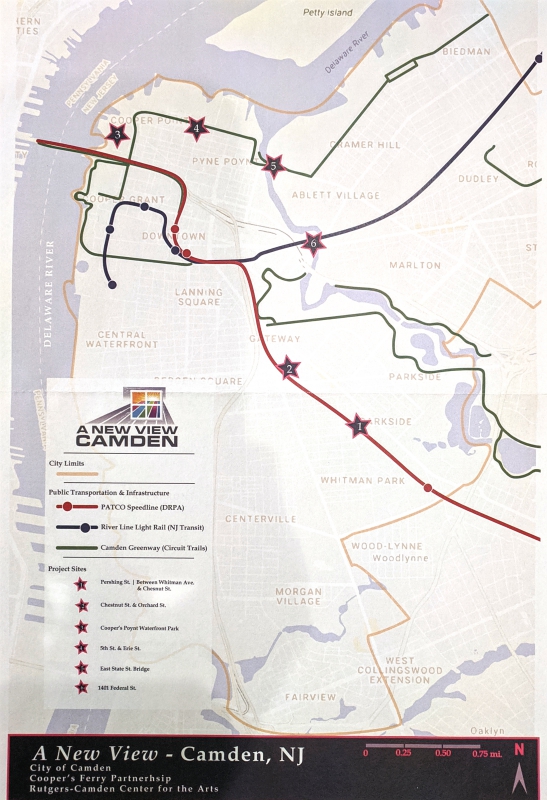 Over the next four months, Camden City will reclaim six former illegal dumping sites as public art installations, thanks to a $1-million grant from Bloomberg Philanthropies.

Entitled “A New View Camden – Reclaiming our Environment Through Art,” the arts challenge will showcase projects selected from a pool of 130 nationwide applicants.

Camden was one of just five U.S. cities selected for the project.

Camden City Mayor Frank Moran hopes the project will catalyze broader redevelopment throughout the city by illustrating what can be created at sites that once were so dirty as to be inaccessible to the public.

Cleaning up such sites can cost the city some $4 million annually.

“There are many components to building a thriving community, and one of those key ingredients calls for a robust arts initiative,” Moran said.

“[The arts] play an essential role in re-establishing the fabric of communities.

‘This is a grand opportunity for local artists to collaborate with national artists and sculptors from throughout the country, and give our Camden artists exposure and opportunity,” he said.

Anita Contini, Director of Corporate and Public Affairs for Bloomberg Philanthropies, said the million-dollar challenge illustrates “the power of public art to transform cities and to spark long-lasting, positive change.

“Great public art strengthens cities by making them more exciting and attractive places to live and work and visit,” Contini said. “Public art can also help us to see urban challenges in a new light and imagine new solutions.” 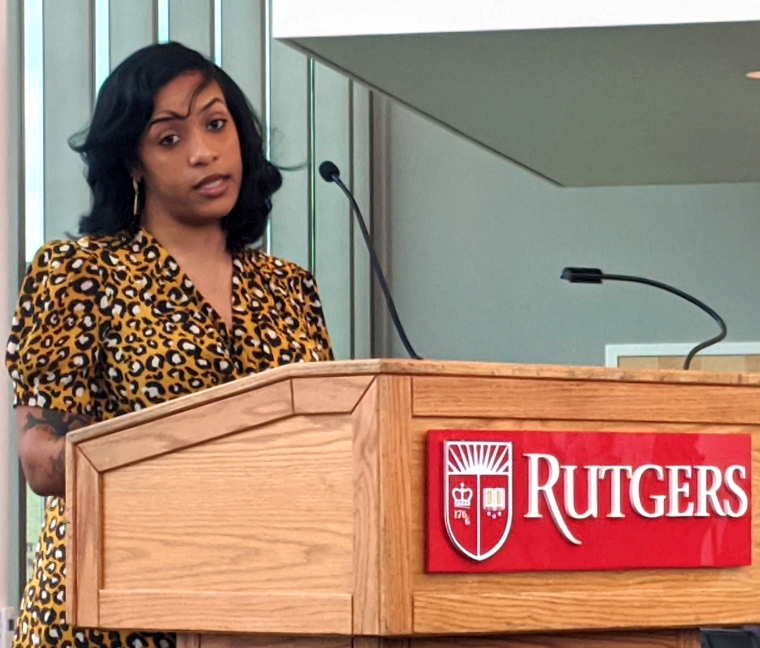 Camden City resident Erika Cruz said her outlook on littering was changed by participating in the selection process for A New View Camden. Credit: Matt Skoufalos.

Camden resident Erika Cruz, who volunteered as a member of the Community Advisory Committee for the project, said that the process itself “has truly changed my way of living” in the city.

“I did not recycle, I frequently littered, and so did my family and friends,” Cruz said.

“I’m proud to say that my friends have committed, and so have my family, to a new view of our city.

“Each one of us now has a trash bag in our car, so we’re no longer throwing bottles out the window,” she said.

“Each one of us now has a recycling bin in front of our houses,” Cruz said. “I find myself checking out at Price Rite and Aldi with my own bag.”

Cruz said she believes that including Camden residents in the installation process will help the community to adopt similar behaviors. The Whitman Park resident hopes that, when the installations are removed in October, residents will be able to replace them with new art that they’ve created.

In announcing the winners, project curator Kimberly Camp of Galerie Marie in Collingswood described how Camden once boasted a vibrant arts scene in her childhood. By the time she’d returned home after college, however, things had deteriorated. Camp launched her own arts career by creating the city’s first mural program in 1983.

“This is about reclaiming our environment through art,” she said. 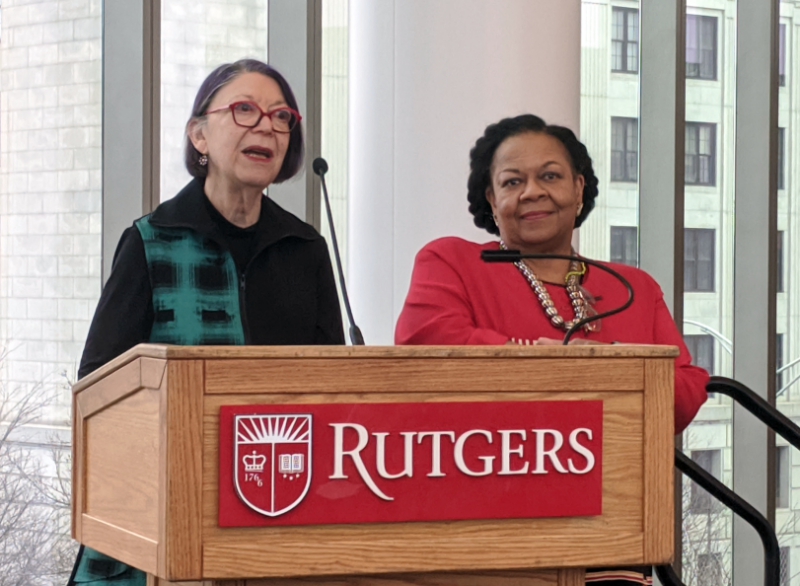 “The idea that this project could really spur so much growth in the creative community is the most amazing thing that one could ever imagine,” Camp said.

Project curator Judith Tennenbaum said the winning entrants were selected for the variety of their approaches to the subjects of environmentalism and public engagement.

“We wanted the work to be accessible, but also challenging and eye-opening, so that citizens of Camden and the public could look at art in new ways,” Tennenbaum said.

“It’s how you walk through buildings and how you look at the landscape around you that you can really change experiences.”

Starting in May, the eight winners will erect their installations at various sites throughout the city. The projects will remain through October.

“Invincible Cat” from DKLA Design of Santa Fe, New Mexico, will install a 36-feet-long, 7-feet-tall, 10-feet-wide, black panther made out of recycled car hoods on Pershing Street, between Whitman Avenue and Chestnut Street.

“Bio-Informatic Digester” from Terreform ONE of Brooklyn, New York, will showcase mealworms that consume Styrofoam to describe the impact of beneficial insect behavior on cities. It will be erected at the intersection of Chestnut and Orchard Streets.

“Turntable” by SLO Architecture of New York, New York, will create a spinning, wind-powered cylinder out of  soda bottles at the Cooper’s Poynt Waterfront Park in North Camden.

“Touching the Earth” by Athena Steen and Josh Satantitis will create totemic sculptures of straw and clay, an oven for bread baking, and mini-parklets with native flowers and vegetables at 5th and Erie Streets.

“Mechan 11: the Collector” by Tyler FuQua Creations of Eagle Creek, Oregon, will erect a 15-feet-tall steel robot that will be shown picking up giant pieces of litter along the State Street pedestrian bridge.

“Phoenix Festival” by The Myth Makers of Boston, Massachusetts will add 22-feet-tall bamboo sculptures and an amphitheater to a site at 1401 Federal Street with the collaboration of residents.

“Camden Is… Blight to Bright” will be a series of 75 portraits of Camden City residents from Camden photographer Eric James Montgomery, and appearing throughout the city.

“Pod Park” installations from Tom Marchetty of The Factory in Collingswood will place functional, freestanding elements at several of the installation sites, providing resting and gathering spaces made from reclaimed materials. 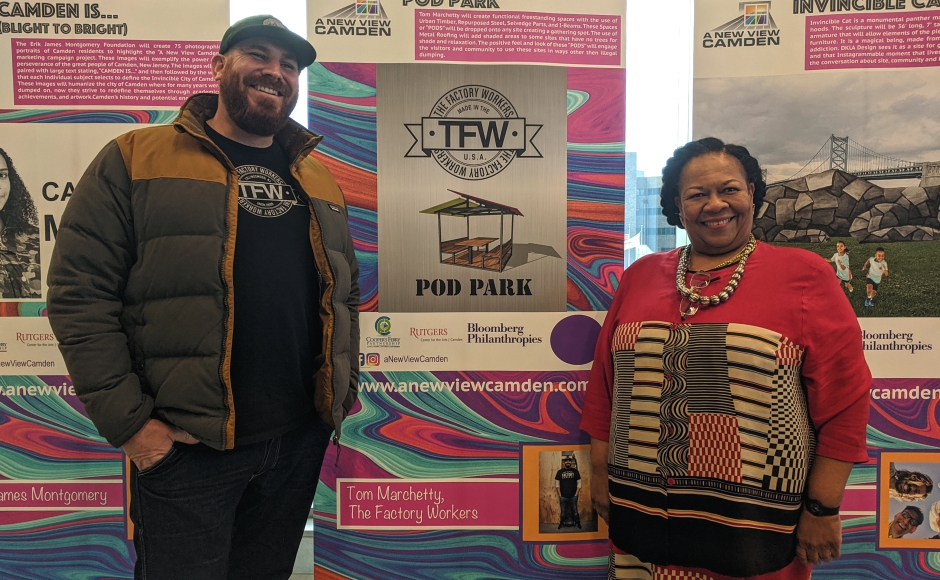 Cooper’s Ferry Partnership Vice President Meishka Mitchell said her organization will be evaluating the project to see if it makes an impact on the amount of illegal dumping observed in the city, or the cost absorbed by the city in battling the problem.

Mitchell said all the sites have previously been remediated so that they’re safe to visit, and that additional “stabilization” will occur as the project progresses.

“We’ve been cleaning up these sites throughout the fall and all of last year,” Mitchell said. “These six sites are really a drop in the bucket for illegal dumping, but we hope these will be a start.”

For Marchetty, who learned industrial trades in his family’s Federal Street machine shop, the project is a return to the city of his youth.

“When my dad bought his shop, it was an illegal dumping site,” he said. “That’s what drew me to this. I grew up every summer working for him, from the third grade on.

“Nothing’s ever happened like this in Camden before,” Marchetty said. “Hopefully this is a great starting point for future organizations and future art projects throughout the city.”