The Gloucester Township Police Department is responding to active shooter threats with tactical training, a pair of heavily outfitted command vehicles, and services for at-risk youth. 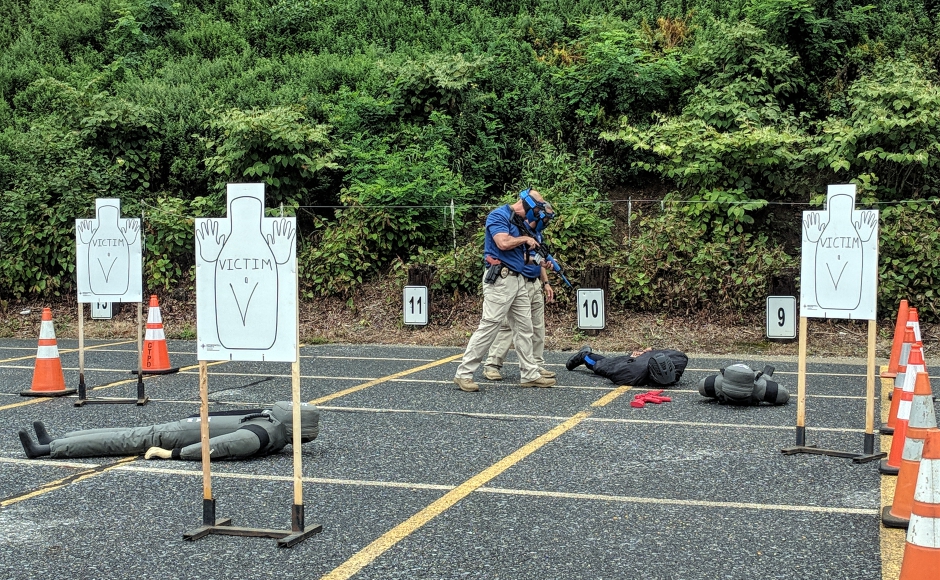 As America continues to grapple with a seemingly ceaseless cycle of gun violence, law enforcement agencies across the country are simultaneously improving their tactics, training, and technology in response.

In Gloucester Township, local police anticipate being able to respond more rapidly to such incidents thanks to a truckload of new countermeasures—make that two truckloads, actually—installed in its new command vehicles.

The two patrol support vehicles, a pair of Ford F-250 trucks, have been packed to the gills with tactical equipment, from rescue and reconnaissance gear to hydraulic door-breaching tools.

Most departments have access to high-powered firearms as needed, but may lack the complementary gear required to root out a shooter who’s barricaded himself in a building with potential victims.

Gloucester Township Police Chief Harry Earle believes the department can save precious minutes during such an incident by stocking the trucks with tactical equipment and rolling one throughout the township 24 hours a day. The chief cited multiple domestic incidents going as far back as 2006 in which police were stymied by doors that had been chained shut or locked electronically, giving shooters more time to kill. 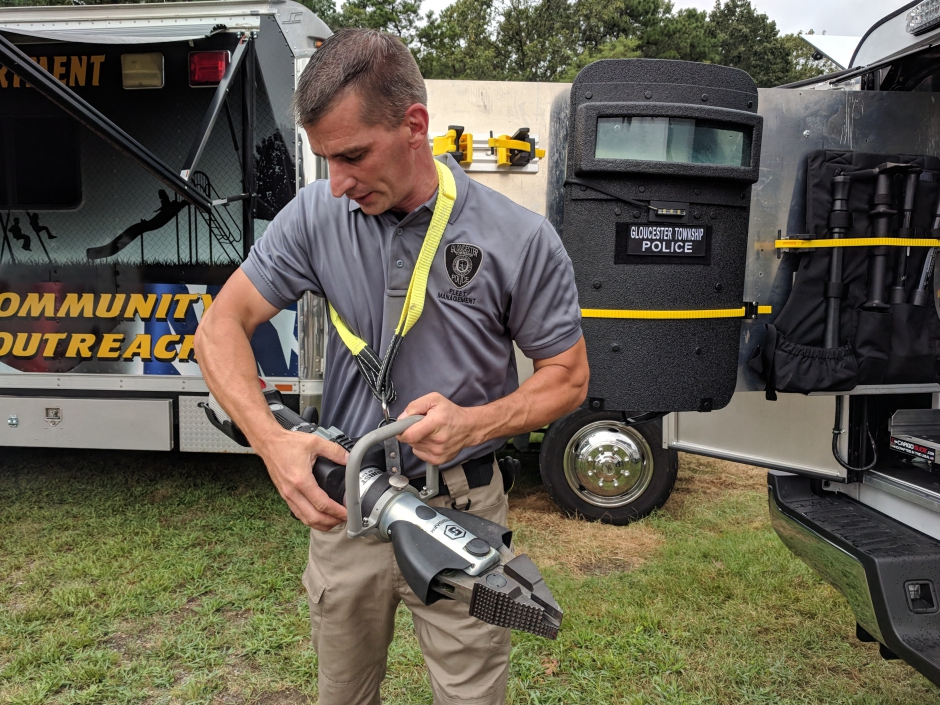 The principal door-breaching tool is the StrongArm, from Hurst, makers of the Jaws of Life.

Gloucester Township Cpl. Michael Mosiondz said the device would not be unfamiliar to fire service volunteers or police officers with military experience.

More than 20 officers already have been trained in its use.

Tools like the StrongArm represent “much more than any patrol car” would normally carry, Mosiondz said.

He expects that other departments will follow the example of Gloucester Township in equipping their staff with similar active-shooter response technology.

“I live in town with two small children,” Mosiondz said. “My fear is of a school shooting.”

Knowing that one of the two trucks will be on patrol 24 hours a day, “I’m happy,” he said.

“This is the way forward.”

The vehicles were outfitted by members of the Gloucester Township public works department. Supervisor Roman Harasym said his staff invested some 50 to 60 hours in the project, including fabrication and installation, and was “happy to do it to help our police department.” 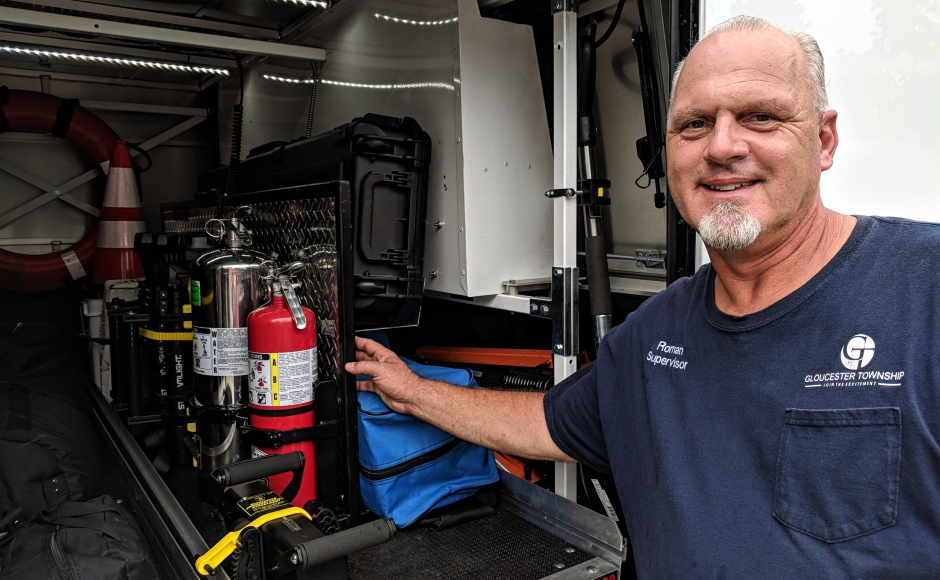 He emphasized that the project was not undertaken as a knee-jerk response to the most recent domestic mass shootings.

For decades, the department has led active-shooter training at the Camden County Police Academy and supported officers statewide with individual training, he said.

Gloucester Township Mayor David Mayer described the active-shooter program as an investment in community safety amid “an epidemic of killing.”

Mayer praised Earle’s third-gear policing strategy as a national model not only for responding to mass killing incidents but also in preventing their occurrence.

“There has been much conversation lately about missed ‘red flags,’ or failed opportunities to ‘connect the dots,’ and especially when adult attackers exhibited concerning behaviors when they were young,” Earle said.

“Most people are not born to be a mass murderer,” he said. “Something in their life made that happen. If we can intervene early, we believe we can have an impact. That has been our approach to policing; our crime has decreased dramatically.”

Since 2011, the GTPD “Juvenile Unit Huddle” has connected with more than 2,400 vulnerable minors in the community who have suffered “adverse childhood experiences,” from domestic violence, a parent’s arrest, or personal crises, Earle said.

Each such event represents an opportunity to intercede in a child’s life and to prevent future tragedies from occurring.

“Every time you hear of an active shooter incident, people say, ‘We never thought that could happen,'” Earle said. “These kinds of triggers that harm children can activate later in life.” 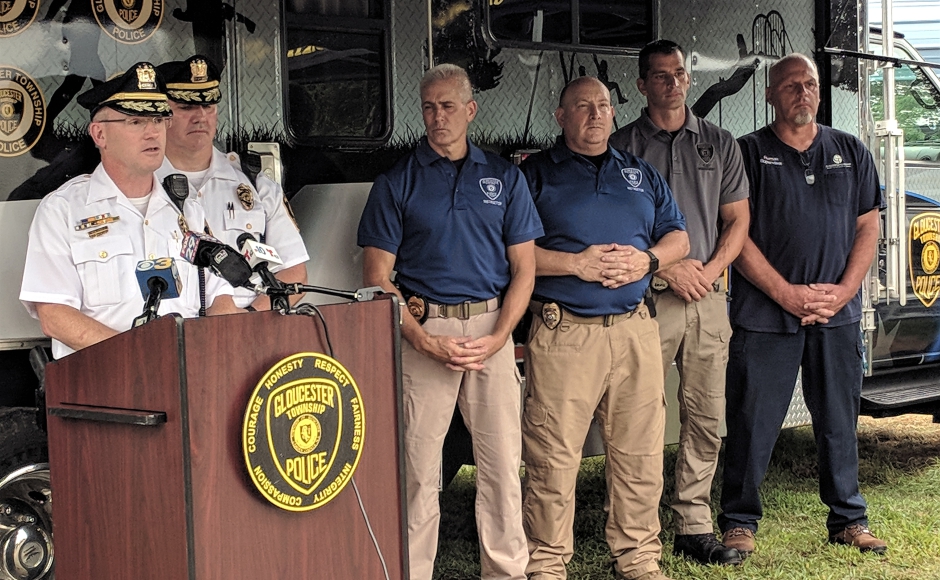 To Earle, “connecting the dots” means keeping tabs on kids who are exposed to childhood trauma, and providing them with support, whether from the local Family Resource Center, School Resource Officer, or social services agencies.

It can also mean reviewing information from the GTPD Juvenile Unit when children it has served apply for firearms permits as adults.

Taking the long view of preparing for an active shooter situation, both tactically and interventionally, has also led Gloucester Township police to collect 25 firearms from people in crisis since 2017. “Well more than 95-percent” of overdose victims voluntarily handed over any weapons to police simply because the officer asked the question, Earle said.

Such tactics are not yet commonplace in all departments, but that weapon surrender rate has the chief convinced that they have already prevented future tragedies.

“We’re getting people the help they need so they would never be in a crisis situation, Earle said.