Last weekend, the animation-driven, late-night programming block returned to Philadelphia for the first time since 2014, and discovered the open arms of a city that feasts on the funky and the fresh. 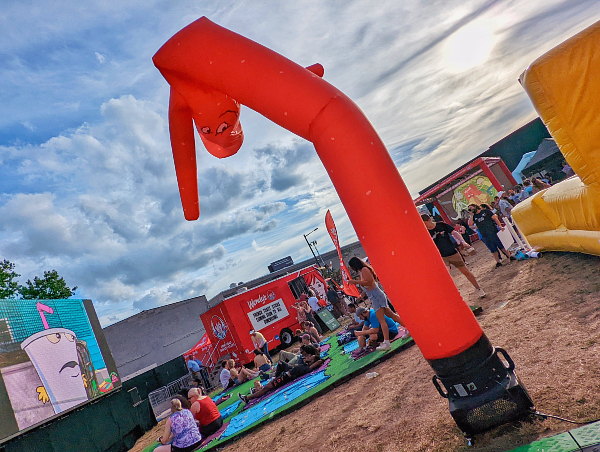 The last time Adult Swim brought its community festival to Philadelphia was eight years ago.

At that time, the home of animation-driven, late-night TV was enjoying significant buzz from the surprise hit of what would become its new flagship series for the rest of the decade, Rick and Morty.

Critical darling The Venture Bros. was five seasons and three specials deep, rumbling along on its own indiscriminate timeline.

With topline hits like those bolstered by syndication deals for hits like Bob’s Burgers, Futurama, and Family Guy, the network was enjoying a second wave of widespread cultural interest that was cresting about 10 years after its original lineup of programs — shows like Home Movies, Space Ghost Coast to Coast, Harvey Birdman: Attorney at Law, and Aqua Teen Hunger Force — had wormed their way deeper into the cultural consciousness, beyond the college-aged, stoner/slacker demographic that had been the first to embrace it.

In 2022, however, late-night television and avant-garde animation aren’t just for insomniacs and shift workers. On-demand viewing habits and work-from-home careers have opened the door for audiences of all stripes to encounter the kind of distinct programming that has always been Adult Swim’s stock in trade, while broadband streaming services enable them to track down any form of niche entertainment, no matter how inscrutable.

That evolution of artistic consumption has fragmented audiences into smaller, harder-to-define groups, even as the entertainment that captures their fancy emerges from an ever-broadening range of sources. Self-produced projects like the Channel 101 monthly film festival, from which Rick and Morty first emerged as a ribald satire of Back to the Future, don’t just populate niche message boards and late-night programming blocks anymore. They command a healthy amount of the mainstream attention paid on the dedicated networks and social platforms that dominate the user’s everyday experience. 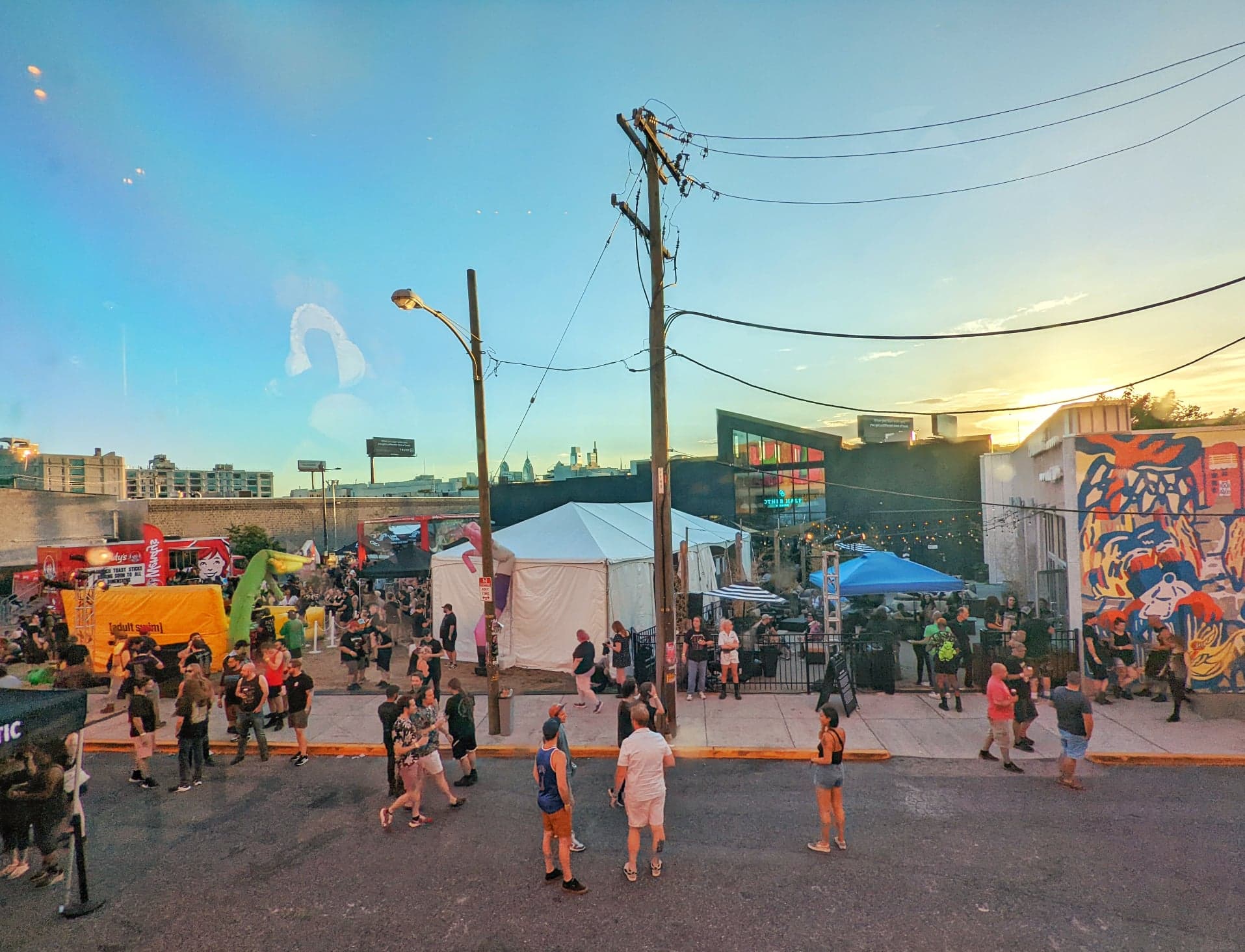 But how that grassroots talent finds the room to grow into a prime-time attraction — and what form exactly the infrastructure that supports its growth should take — is precisely the question with which both artists and the media outlets that distribute their work are wrestling across the entertainment business.

At times, that question also hung in the air at the Adult Swim festivities in Philadelphia, mostly because the weekend block party came after news that its parent company, Warner Bros., was cancelling a number of nearly completed projects after its recent merger with Discovery.

The topic came up in artist panels where creators like Dave Willis of Aqua Teen Hunger Force joked that he’d screen the upcoming Aqua Teen Forever: Plantasm, in his backyard if somehow the plug were pulled before its November release.

It was palpable, if not explicit, in a stand-up set from comedian Conner O’Malley, whose run as volcanic Michiganite Mike Melsky on the Adult Swim original Joe Pera Talks With You ended with the unexpected cancellation of that show, announced just a month ago. Even earlier rumblings must have been felt throughout the chain when Adult Swim exec Tom Ascheim, Warner’s head of programming for kids and young adults, was a high-profile merger casualty.

Notwithstanding the difficulty of putting on a promotional festival to rally fan interest in programming that could seemingly disappear overnight at the whims of corporate efficiency, the mood in Philadelphia was largely undimmed; mostly, it seemed, because of the art on display there. 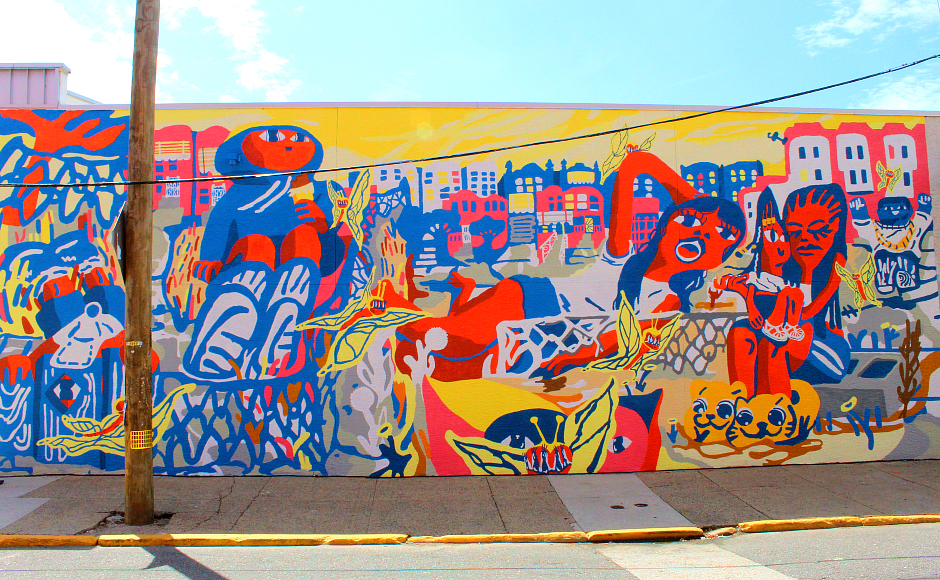 Atlanta artlist George F. Baker, III produced the festival’s signature mural, a neon ode to the eclectic stars of the Adult Swim animated lineup, which hung in the lobby of The Fillmore all weekend and will doubtless turn up in the background of many a selfie.

The artistry was there, too, in musical performances by acts like Run The Jewels, Tierra Whack, and Dethklok. It was longtime Adult Swim executive Jason DeMarco who introduced RTJ emcees Killer Mike and El-P in a Brooklyn-Atlanta connection that’s flourished into one of the premiere touring hip-hop acts of today.

Philadelphia itself was represented properly by Whack, who has emerged, seemingly fully formed, from the city’s freestyle scene to deliver a series of singles displaying eye-popping versatility and creativity.

Sunday night headliner Dethklok, the death metal band from Adult Swim’s Metalocalypse, delivered what could be its only concert of 2022, and its first in four years. Frontman Brendon Small, who created both the animated series and the real-life, best-selling metal band based upon music he wrote for the show, had to break from crafting its upcoming feature-length movie for the (sold-out) performance at The Fillmore. 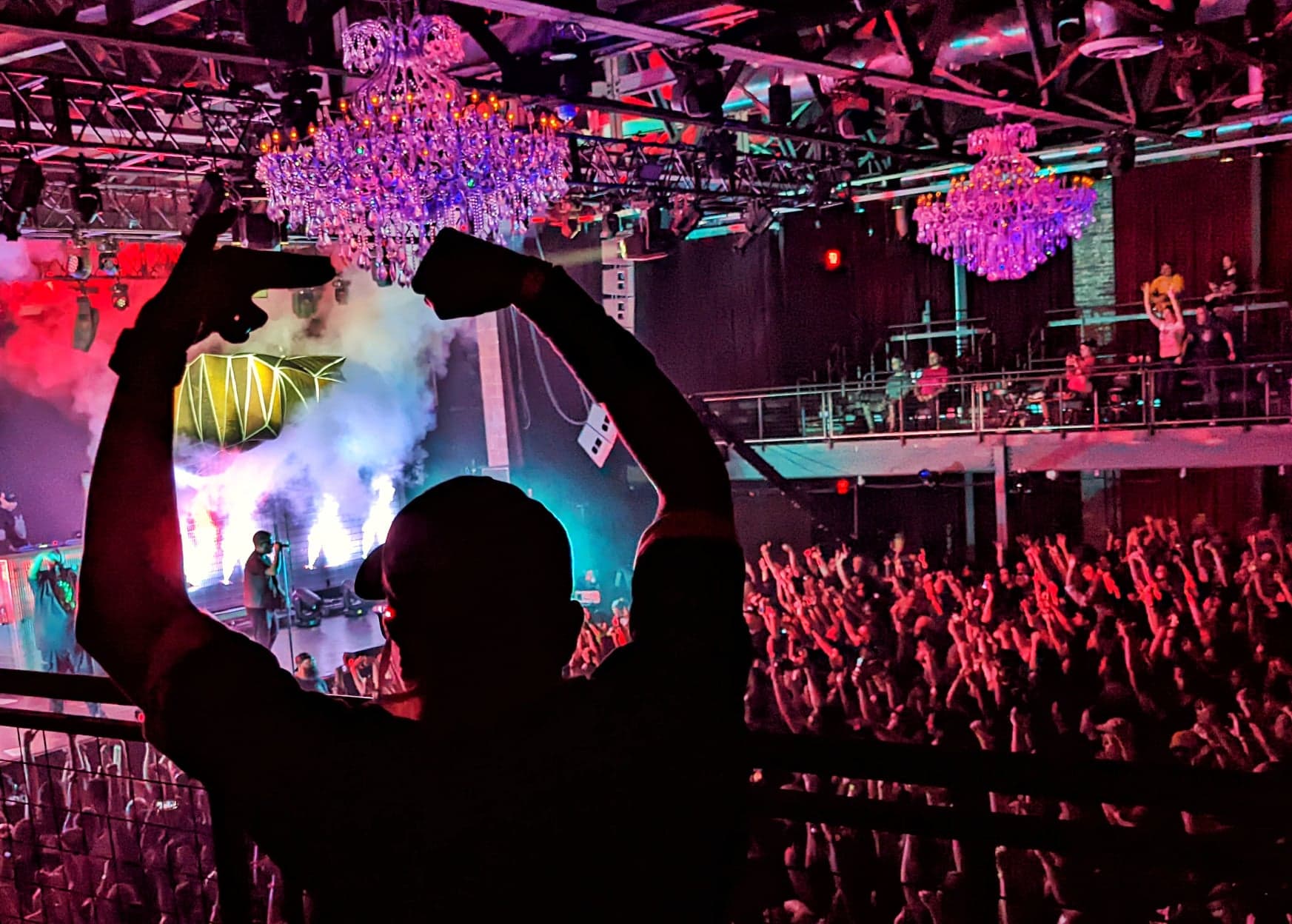 Run the Jewels performing at The Fillmore in Philadelphia. Credit: Matt Skoufalos.

There was also a clear sense that the energy and effort and place-setting that went into the block party weekend was connecting with its intended audience. Other Half Brewing is only six months into its new Fishtown digs, but Chief Operating Officer Andrew Burman, who described himself as “a huge Adult Swim guy,” said the festival was a rare marriage of business strategy and personal interests.

“It’s really nice to see my staff excited about something; to be telling their friends, ‘Can I get an extra ticket for that show?’” Burman said.

“It was the best part about it,” he said. “Standing for something, and having partners who stand for something, is really important in a collaboration.”

Chasing that Philly love was a top priority for returning the festival to the East Coast, said Jill King, Adult Swim Senior Vice-President of Marketing and Partnerships. Out along the banks of the Delaware, Adult Swim is “able to grow our global audience in a way that we weren’t in California,” King said.

“The conversation started with doing something special,” she said. “Philly was a really good market because it wasn’t one genre over another,” which fits with an entertainment group for which “our tastes are different than what you would see  [elsewhere].”

Perhaps the canniest take on the savviness of the crowd came during the Aqua Teen Hunger Force panel discussion, when a fan asked why the show was set in South Jersey, and Willis answered in the voice of Carl, the eponymous trio’s cantankerous neighbor.

“Because Philly ain’t good enough!” he said, to an uproar of laughter that only intensified when ‘Carl’ offered to facilitate an interstate brawl in which IDs were checked at the bridge, and vowed that the New York Giants would run through the NFC East “like a bull through wet paper” in the 2022-23 NFL season. 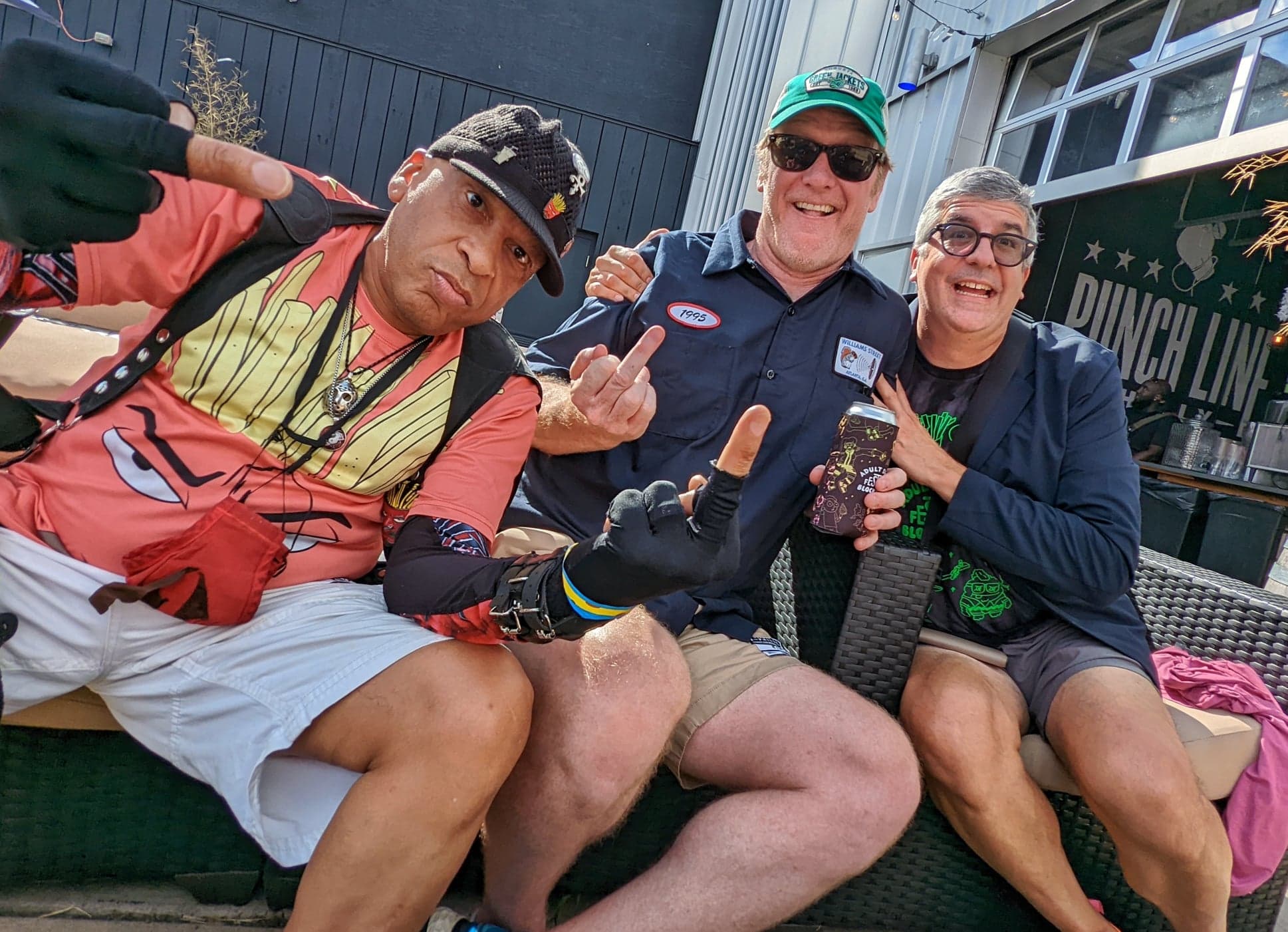 Willis and his Aqua Teen costar Dana Snyder, an Easton, Pennsylvania native who voices Master Shake, were both in Philadelphia when Adult Swim last visited in 2014.

They’ve been standard-bearers of its confrontational comedy since the early 2000s, when the city’s independent film festival welcomed the adult animation lineup in far less decorous settings.

(Back then, Snyder recalled their festival host donning a chef’s hat before attending to “the kitchen,” a microwave that pumped out a steady stream of Hot Pockets when the beer dried up).

Together with Carey Means, who voices Frylock on Aqua Teen, the trio was reunited during the COVID-19 pandemic for the first time since the show was cancelled in 2015. The feeling of being invited to resurrect the characters that they’d inhabited over the past two decades was like “jumping on a bike,” Means said.

“It felt like there was no lapse in time,” Snyder said. “I was tucked into a closet recording my lines, and it felt so good.”

“It was all the original people doing the same thing that made it special in the first place,” Willis said.

Asked to account for the show’s unlikely longevity, Willis said the performers and series co-creator Matt Maiellaro “just did these things that amused us.”

That’s how you land on story notes that imagine Misfits frontman Glenn Danzig as the kind of homebuyer who is charmed by a cursed property, or recruiting Ozzy Osbourne guitarist Zakk Wylde to pen a dissonant, operatic metal replacement for the “Happy Birthday” song as a cynical cash-grab.

“It was a small group, and based on our obsessions, so that maybe other things cut through,” Willis said. “Hollywood is like a machine, and this is an indie band.”

If anything, Willis’ observation feels like both the most meaningful takeaway from the entire weekend, and maybe the biggest programming note for the production teams looking to reverse-engineer the successes of a fringe crop of creators who struck gold by betting on their own weirdness.

To cultivate a throng of devotees who’ll sell out a campus of Live Nation performance venues and slug back drinks while they watch cartoons outdoors in the August heat, you have to encourage the rabbit-hole fascinations of the kids inside them through a multiplicity of artistic perspectives.

For the last 20 years, that’s precisely how Adult Swim smuggled its house brand of counter-culture into pop culture conversations, and that’s precisely why its work still resonates in Philadelphia, where the love of a city is tied up equally in cynicism and sincerity, and baring your soul right down to the roots is the only way to show up.