Developers say the project should move forward without retail space or risk years of legal challenges over COAH regulations and accumulating debt interest.

In the end, the price of keeping a retail component attached to the Town Center at Haddon redevelopment project is as much about the complications of commercial parking requirements as it is affordable housing.

Developers Fieldstone Associates of Doylestown, PA told the Haddon Township Planning Board Monday night that the only way to keep a project approaching its 12th anniversary from carrying on for another half-decade is to eliminate the street-facing storefronts that would have occupied its lowest levels, and to build apartments instead of town homes.

It wasn’t the news the some thirty-odd Haddon Township residents in attendance wanted to hear. But among the many variables that have influenced the development of the project—environmental, legal, and economic—it was likely one of the least-expected.

‘A long and grueling road’ 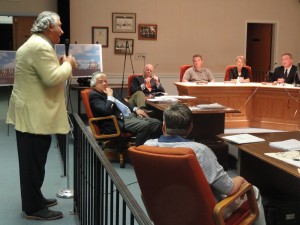 “We’ve been at this, along with you, since 2003,” said Fieldstone attorney Richard Goldman, of the Princeton-based Drinker, Biddle and Reath. “It’s been a long and grueling road.”

From surveying environmental contamination at the old Dy-Dee Diaper facility to fighting legal challenges from the Fair Share Housing Center of Cherry Hill, Fieldstone has remained committed to the project, Goldman said, even after the real estate market tanked in 2008.

“Our goal is to start building,” he said, “and we’re ready to do that, immediately.”

Rather than wait for the resolution of a “cat-and-mouse” game between the New Jersey Supreme Court and the Council on Affordable Housing (COAH) over proposed affordable housing rules, Goldman said Fieldstone offered to settle the case with Fair Share by providing 23 affordable units in the Town Center even though “that was never part of their obligation.

“If we don’t settle, there is going to be litigation for four or five more years,” Goldman said. “If the interest rates go up in five years, it could undermine the entire project.”

Goldman told the planning board that his clients have invested more than $4 million to date in the project, which has yet to break ground. On top of that, Haddon Township is on the hook for a $6 million municipal bond that Goldman said is approaching $8 million, with annual accrued interest on the order of $350,000.

“In the end, the community has a choice,” Goldman said; “the same choice we’re looking at as a developer. Do we wait for four, five, six, 10 years to get something happening on Haddon Avenue?

For every 1,000 square feet of retail added to the space, developers must allow for three-and-a-half parking spaces, or the equivalent of two apartments, said Fieldstone architect Victor L. Barr, Jr. The added burden of the 23 affordable units, which the project did not originally contemplate, means that Fieldstone would have to replace 19 market-rate units, which Goldman called “the engine driving this project,” in order to keep the retail space.

“Twenty-three units of affordable housing is going to cost this project millions of dollars,” he said. “How can we make that work?” 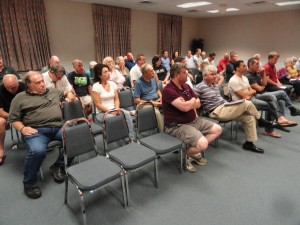 Many Haddon Township residents expressed frustration that the project would lose its retail component under the proposed settlement. Credit: Matt Skoufalos.

‘There is no condo market’

“It’s obvious to all of us here tonight that these prices cannot be achieved in today’s real estate market, nor would we see these prices any time soon,” Corsini said.

In that same time, he pointed out that similar shortfalls were enough to force other builders to restructure major projects nearby from for-sale to for-rent, including the Collingswood LumberYard, Cherry Hill Racetrack, and Voorhees Town Center (Echelon Mall) properties.

“There is no condo market,” Corsini said. “There’s none that would support the cost of this housing project,” in part because of tightened lending requirements for both homeowners and developers.

“You have to have 50 percent of the building sold before the first mortgage can be written,” he said.

As originally conceived, the project would have brought in $70 million of revenue, Corsini said. The shift from condos to apartments reduces that figure to “about $4.5 million gross, per year,” excluding property management expenses. He described the profit margin on the revised project as “very, very slim; probably in the two-to-three-percent range.”

“To anyone who thinks this is a big windfall for Fieldstone, I would like to disavow them of that notion,” Goldman said. “We have 204 market-rate units that are now cross-subsidizing the affordable-rate units.”

Projected monthly rents for the revised project would run $1,350 for a one-bedroom unit and $1,595 to $2,150 for a two-bedroom unit, with additional charges for garaged parking and “premium locations,” Corsini said. Those rates are exempt from the township rent-control ordinance.

He stressed that the Haddon Town Center would still be a “Class A, upscale, luxury” property, even as a rental complex, with “exquisite lobbies,” a “state-of-the art security system,” outdoor pool and spa, clubhouse and pocket park on the premises.

Barr said that despite the changes, the Haddon-Avenue-facing townhouses will feature brownstone facades in keeping with the character of the area, with raised entrances, varied roof lines, a combination of bay windows and balconies, masonry and siding. The majority of the proposed parking “is internal to the site and hidden from the street,” he said.

Even without the retail component, Corsini said the project would still have a commercial benefit to the township by attracting “a demographic with high disposable income” to “help support existing retail and business establishments” and “seed the surge of opportunity for redevelopment” elsewhere in the township.

“Start this project now and get the center of your town thriving rather than laying here dormant,” he said.

The proposed, revised design for the Town Center at Haddon shifts the mixed-use project to an all-rental luxury apartment community. Credit: Matt Skoufalos.

But resident Patricia Seidman said the same critical mass of people that Fieldstone promised would add to the customer base of local businesses would create additional, unwanted traffic on surrounding side streets.

“People move to Haddon Township for their small, school communities,” Seidman said. “That many apartments is a little scary. Traffic will be horrendous. There’s not going to be a way out of this development onto Haddon Avenue because of the traffic light. It’s going to enter into the neighborhood.”

Resident Thomas Cassell voiced his concerns with “adding parking to a place with a no-overnight-street-parking ordinance.”

Attorney Donald Cofsky, counsel for the planning board, added another consideration to the mix.

“Right now the township has immunity from [a]builder’s remedy [lawsuit],” Cofsky said. “There’s so much money now invested by all parties that it could be a disaster.”

Cofsky also pointed out that the last township master plan recommends keeping retail development between Cuthbert and Glenwood Avenues while concentrating professional offices in the area from Glenwood to Crystal Lake Avenue.

“I think retail is difficult on the avenue,” Cofsky said. “There’s only so many dollars that can be spent on retail, and yet look at the competition. It’s very difficult for stores that don’t get the vehicle or foot traffic to stay in business.” 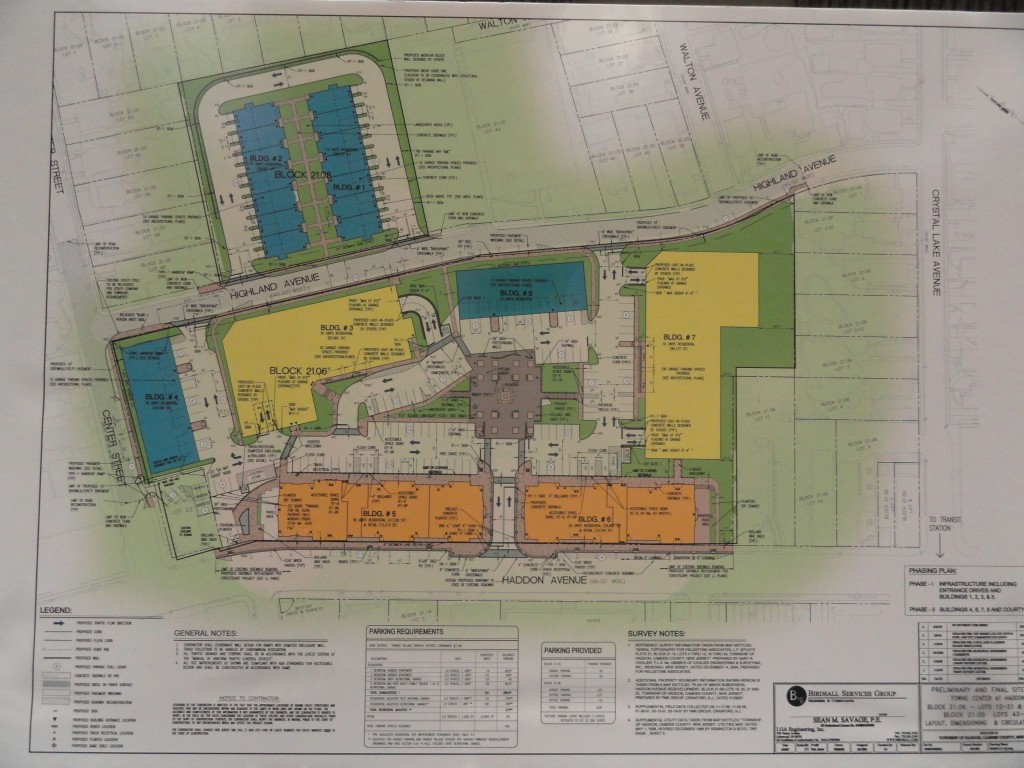 Layout of the original site plan for the Town Center at Haddon, which included retail and condominium spaces. Credit: Matt Skoufalos.

Town Center at Haddon by the Numbers

12 years since the redevelopment agreement was signed (July 2003)

17 properties acquired for the project

23 affordable housing units under terms of the proposed settlement

25,000 square feet of retail and commercial space in the original project design