Haddon Township residents are collecting donations for the nearly 30 staffers who are temporarily out of work.

Pennsauken natives Chris and Adrienne Bell were eating at the Crystal Lake Diner long before they took up residence near the landmark Haddon Township restaurant. 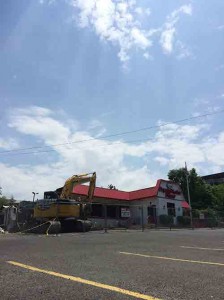 That’s why the fire that devastated the diner on Sunday was both “financially devastating” to the people who worked there, she says, and “personal for us.”

In response, the Bells are collecting donations for Crystal Lake employees.

This Saturday, June 7, those who want to help can drop off gas and grocery gift cards, household items, or other necessities at the entrance to Newton Lake Park (Cuthbert Boulevard and Lakeshore Drive in Haddon Township) from 7:30 to 10 a.m.

‘None of us were prepared for this’

According to the most recent data from the state labor department, about a quarter of the jobs in New Jersey’s $43-billion Leisure, Hospitality and Retail (LHR) cluster are in food service.

They offered an average annual salary of less than $18,000 in 2012, and growth in that sector is being outpaced in New Jersey by the national average.

That means that finding a new job isn’t necessarily going to be easy for the nearly 30 Crystal Lake employees who are out of work until the fate of the diner is determined. 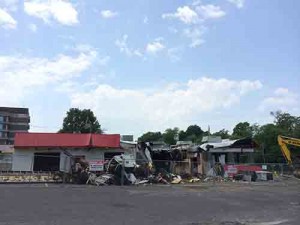 Tougher still, many of them have families to support, said hostess-manager Margaret Fanelle.

“The economy is tough, and in the summer time, business slows down,” said Fanelle, a Collingswood resident who has worked at the restaurant for nine years.

“A lot of girls are working for their children, for themselves, trying to keep a roof over their heads.”

Kristina DeShields of Westville, who says she’s worked the counter at the diner for 14 years, said that many servers live shift-to-shift “on that every-day money.

DeShields and Fanelle both counted themselves lucky that they are not the sole earners in their households, but added that the financial loss is still meaningful to their families.

“We’re all in it because we have to work,” DeShields said. “[Bill collectors] don’t want to hear that your job just burned down.”

Compounding the pain and confusion, she added, is the idea that her coworkers of many years will be scattered.

“That was my second home, and now it’s down,” DeShields said. “It’s very sad to know that we’re all going to be spread out. I feel for my coworkers, my bosses, my customers.”

Workers are hoping that that the Vasilakis family, owners of the diner, will rebuild soon. Fanelle said she is optimistic that the property could be re-opened within six months.

But that’s still a long time to be out of work.

Donations for Crystal Lake Diner employees will be collected from 7:30 a.m. to 10 p.m. Saturday, June 7, at the entrance to Newton Lake Park (across from the diner). For more information, visit the Facebook page of Bell’s Bodies-Haddonfield Sports Club.