South Jersey’s latest craft brewery will welcome guests into a converted garage with rotating recipes and a loft/lounge feel. 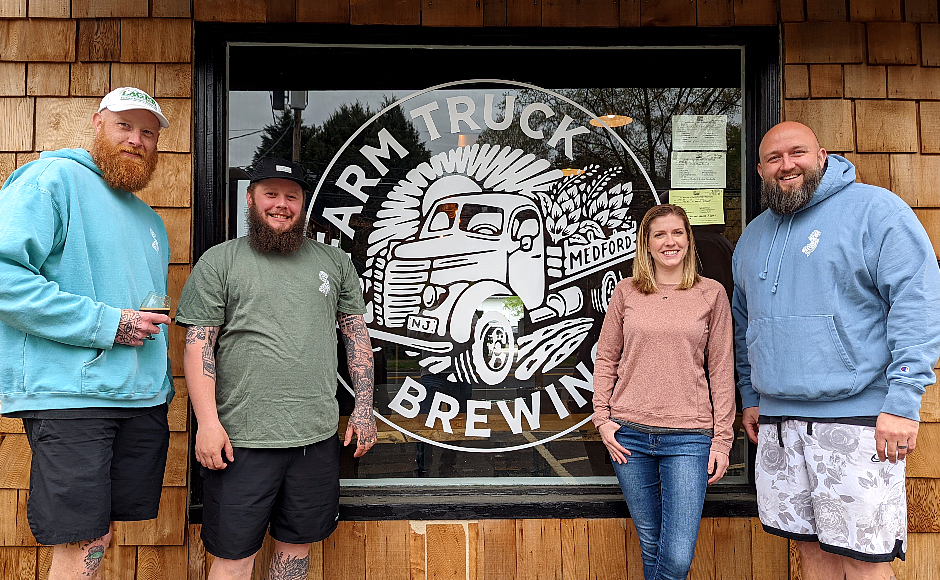 As much as craft beer fans in South Jersey will always look forward to the opening of a new brewery, perhaps none in the region has been as anticipated as that of Farm Truck Brewing.

For the past two years, Brooke Tidswell and Jason Kuhn have been drumming up interest in their as-yet unopened venture, teasing glamorous product shots of undrinkable beers on Instagram, and building up a following as they go.

“We’ve always told people we’re going to be opening soon, and now we can actually say that with a smile,” Kuhn said. “It’s almost real.”

For Tidswell and Kuhn, two Medford-area neighbors who met in line at Tired Hands Brewing in Philadelphia and began trading beer with one another soon after, the idea of starting their own brewery has been fermenting since 2018.

In 2019, the heavily tattooed Tidswell quit the world of commercial lending to open an Amazon logistics business. Kuhn, an itinerant chef and barista who’d bounced around kitchens and coffee houses from Hearthside to Harvest, began applying his culinary techniques to home-brewing.

When the novel coronavirus (COVID-19) pandemic hit, Tidswell poured money from his booming delivery enterprise into a building in downtown Medford, which they transformed into a microbrewery with the help of friends Chris and Aaron King.

During the two years in which most of the world was put on pause, the group got to work outfitting the space as Farm Truck Brewing. While that may feel like a long on-ramp for thirsty customers, Tidswell said the protracted timeline gave the partners time to consider every aspect of their plans more deeply.

Now their finish line is within sight. 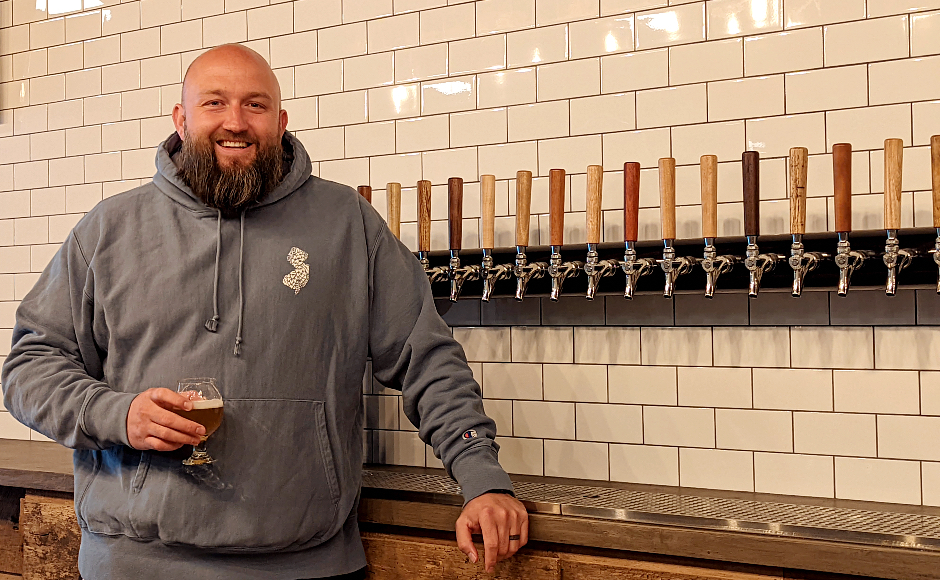 “The time it took us to build this allowed us to learn what we wanted to put out there,” Tidswell said.

“We want to focus on your full-time experience.”

So how’d they land on the name Farm Truck?

Tidswell said it’s “a salute to the farming world of South Jersey” and its reliable backbone.

“We love farms,” he said. “What do all farms have? A truck. Old trusty.

“We want to be that one [place] where you know when you come in, you’re always going to get great beer here,” Tidswell said.

“We want to make sure our hops are always fresh, we’re getting fresh grain, and bringing back that Garden State mentality, and living it.”

Their building has automotive roots, too: in the early 1900s, it operated as Lamb’s Garage, a service station, and later, auto dealer. Kuhn also claims a family connection to the property: his grandfather met his grandmother there.

“It’s a hidden gem,” Tidswell said. “It’s unassuming. We’ve now lived in it for two years, and added all our touches.”

Beyond the history of the building itself, Tidswell and Kuhn also embraced a reclamation and reconstruction approach to outfitting their space. 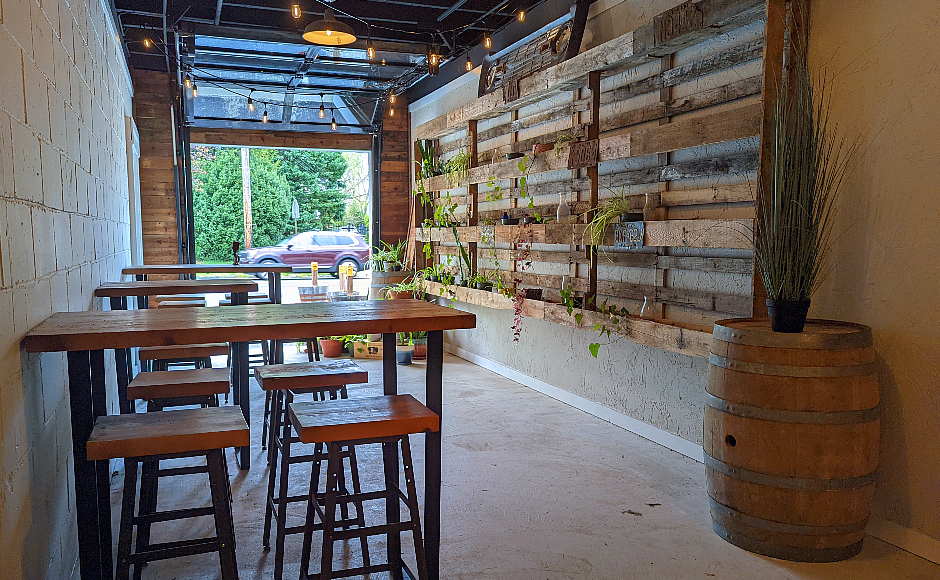 The brewery comprises a variety of locally salvaged materials, including the overhead beam above its main bar (barn wood from Lancaster, Pennsylvania) and bar front (flooring from a property in Northern Liberties).

Cedar sourced from Chatsworth was used for its wall runners and living plant wall, which features succulents and climbers from Petticoat Junction of Vincentown.

“A lot of breweries have four cold walls,” Kuhn said.

“We didn’t want that. On a rainy day, you can feel like you’re sitting outside.”

In addition to infusing the space with greenery and natural elements, Farm Truck embraces an open layout that showcases its working brewers.

Tucked away in its walk-in box is a system of glycol-chilled lines, run by Philly Homebrew Outlet of Oaklyn, which ensure every beer is poured cold at the tap.

There’s seating for 80 to 90 guests inside, plus a patio biergarten; the main entrance to the brewery offers a smaller bar for overflow seating, and a takeout fridge for package goods.

As for the beer itself, Kuhn and Tidswell said the two years they spent considering their recipes allowed them to fine-tune everything to their satisfaction. 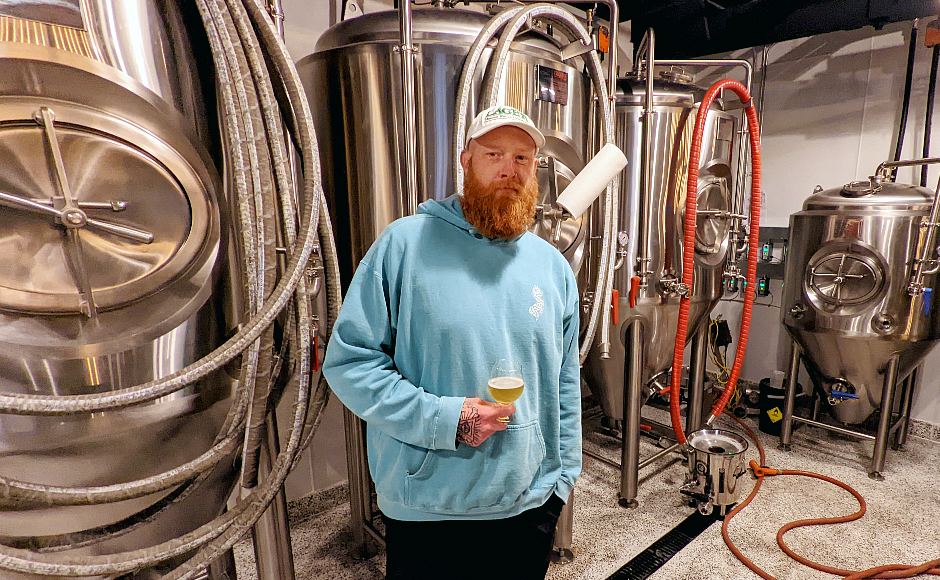 “I’ve been taking all my favorite beers that I’ve had all these years and putting my own touches on them,” Kuhn said.

“They’ve changed four times since I started them.

“Not opening for two years helped me develop those recipes a little better.”

After training his palate in kitchens across South Jersey, Kuhn said he’s hit his creative stride as a brewer.

He describes the Farm Truck tap list as yielding “something for everyone,” with different offerings available at subsequent visits.

“We have the opportunity to make a lot of beer,” Kuhn said. “It’s going to rotate a lot and it’s going to be random, but that’s what I want.

“I want you to come in here and find a new favorite each time you come in there,” he said.

For the June 25 grand opening, the brewers are planning to offer nine beers.

Farm Truck also leans heavily on the science of brewing, and the work of chemist Natalie Nienaber, whose work Tidswell said has been invaluable to the product development process.

“When you have somebody checking your science and approving the details, and who understands fermentation science, that’s how you get there,” he said.

As important as the beer and the facility are to the growth of the business, Tidswell and Kuhn say they’re just as concerned with helping establish a comfortable, welcoming environment for their guests. 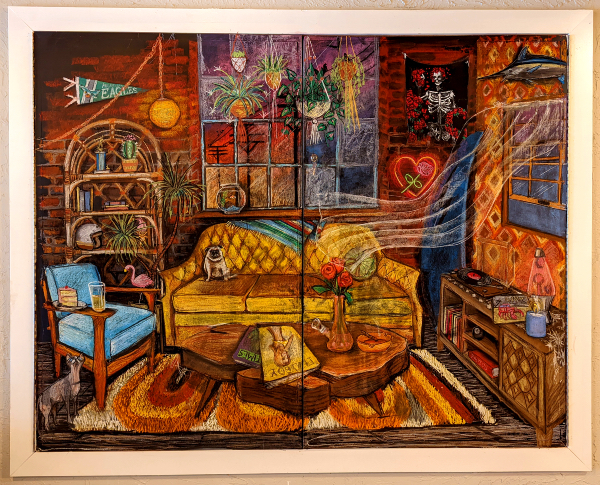 Just past the living plant wall at the front of the brewery is a framed chalk mural by artist Jessie Wolf of Bunkerfish Designs that functions as a statement of intention.

It shows a Boho loft apartment, stocked with midcentury modern furniture, a Hi-Fi, housepets, and a breeze drifting in through an open window.

“We want you to feel like you’re at your friend’s house, or at home,” Kuhn said.

“We want you to be comfortable here.”

“This is a space to come, socialize, get out of your problems,” Tidswell said. “We want great people to have a great time drinking a great beer.”

Farm Truck Brewing is planning to welcome its first guests for a June 12 soft opening that coincides with the Medford Arts Wine and Music Festival. The grand opening is slated for June 25.