The death of a seventh-grade student sparked a community response to ensure her memory will survive. 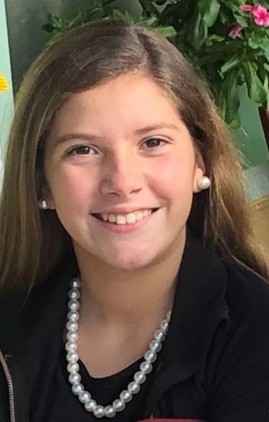 In the small communities of South Jersey, neighborhoods are tight, and every loss is felt deeply, yet Perry’s passing was especially resonant.

That’s not only because Haddon Township schools were obligated to notify district families that Perry was positive for novel coronavirus (COVID-19) at the time of her death, but also because she was a bright light to those around her.

Haddon Township resident Nina Rippo said that Perry was instrumental in helping her own daughter, who suffered from social anxiety, to be more comfortable in school.

After they met in third grade, the two girls became inseparable, which deepened the connections between their families.

In the final week of August, they all gathered in Ocean City, a place that Rippo said perfectly befitted Perry’s personality.

“Amelia loved the waves, loved the beach, loved the ocean, the rides; she loved everything,” Rippo said. “She was always smiling. When she waved, she waved with her whole body.”

After Perry’s passing, Rippo found a photograph of a plate that Amelia had made at All Fired Up, a paint-and-take pottery studio in Collingswood. It contained an image of a sunflower surrounded by the words, “Always Face the Light.”

To Rippo, it was the perfect signifier of a girl who loved flowers, exuded kindness, and carried a message of goodwill with her through the world.

As word of Perry’s death circulated on social media, Rippo shared a photograph of her plate among the remembrances. Her neighbor Stephanie Hojnowski saw it, and contacted fellow Haddon Township resident Sarah Smith Lee to see whether they could transform Perry’s artwork into a tee shirt to raise money for her grieving family. 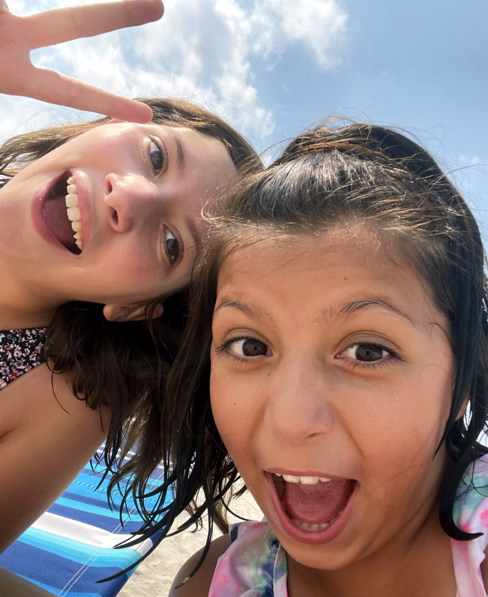 “The message, ‘Always Face the Light,’ brought tears to both of our eyes,” Hojnowski said.

“This town has been tearing each other apart, and it makes you stop and think how lucky you are to have your healthy children,” said Hojnowski, a mother of four.

Lee had the design done in a day, placing Amelia’s artwork and signature on a field of purple: her favorite flower, her favorite color, and her personal motto.

“The message is just amazing, and seems to match her personality and what she was about,” Lee said.

She’s hopeful that the Perrys will not only benefit from the proceeds of the tee shirt sale—all the money raised goes directly to the family—but that the shirts will also carry forward Amelia’s outlook on life.

“I hope in a year or two, the mom will be out in a store and see somebody she’s never seen in her life with her daughter’s message,” Lee.

“That’s more important than people realize when you lose someone; that there’s someone telling her story, sharing her art,” she said. “In that way, her purpose just goes on.”

Perry’s uncle Derek Schofield said that the family has been overwhelmed by the love the community has shown them in the wake of their loss.

“The outpouring of support is beyond anything we could have imagined,” Schofield said. “To see the amount of people Amelia touched in her 12 short years is astounding.

“As someone who loved helping others, she would find great comfort in the awareness her passing has brought to the local community and beyond,” he said.

Schofield confirmed that Perry tested positive for COVID-19 September 21, when she was also diagnosed with Type-1 diabetes.

“This combination, along with pneumonia, caused her health to rapidly decline,” he wrote in an e-mail. 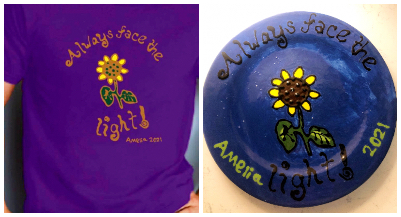 Perry’s official cause of death has not been determined yet, according to Camden County officials.

The family praised “the heroic efforts of doctors and nurses at Cooper University Hospital as well as Children’s Hospital of Philadelphia” in working to save her life.

Over the summer, Perry had been working to complete an autobiographical journal, 3000 Questions About Me, from which Schofield excerpted a few of her responses.

Amelia’s heroes included “people who are nice to others,” her favorite occupation was “doctor,” and her motto, “Always face the light,” paired nicely with her love of sunflowers, the young blooms of which always turn towards the sun.

To support the Perrys, Rippo has organized a Meal Train, which also accepts financial donations, as well as a GoFundMe page. Tee shirt ordering information is available here, and those interested can contact alwaysfacethelight@yahoo.com for more information. Youth and adult sizes are $20, XXL is $25; payments are accepted via Venmo at @alwaysfacethelight.