Trending
You are at:Home»Business»Amber Grain Bakery to Open June 1 in Collingswood

Stephen and Franziska Kramer believe there’s a place for their ‘back-to-basics’ approach to breadmaking and German pastries at the far end of Haddon Avenue. 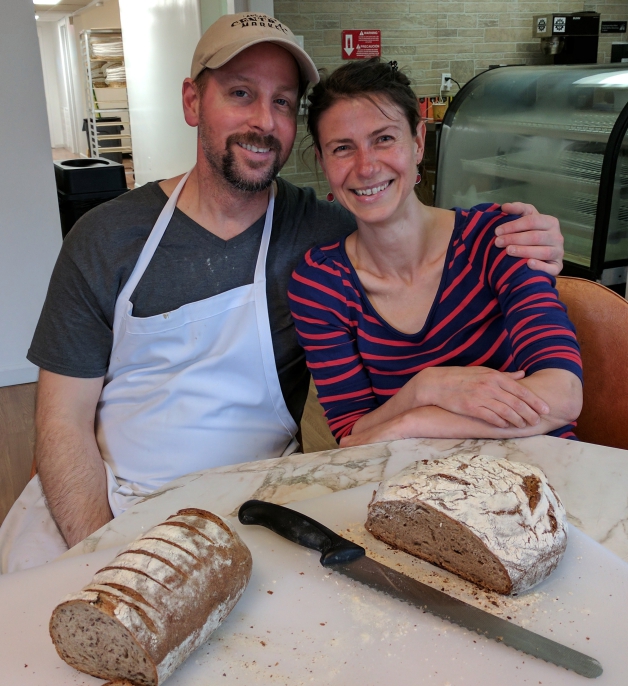 Stephen and Franziska Kramer sample some of the first loaves at Amber Grain bakery in Collingswood. Credit: Matt Skoufalos.

About four years ago, Stephen and Franziska (Franzi) Kramer came to Collingswood on a day trip from Elkins Park, and ended up with a dining room table.

It was an impulse buy at the furniture store Dig This, and they realized after talking with owner (and realtor) Reed Orem, that they’d need a new home to go along with it.

The tidy charm of the borough had ensnared them, and today, the Kramers are banking on its walkable shopping district and culinary-conscious residents to provide a foundation for their new business, Amber Grain bakery.

“What we were really looking for was more of a community,” Franzi said.

“We have a great farmers market that finds a lot of customers,” she said. “People are very conscious of their choices of food. The restaurants are flourishing. You have sidewalks. You have that town center.”

Stephen’s corporate background is in process improvement, but his passion for bread is relatively new. After jettisoning an impulsive (and large) purchase of homebrew equipment some years back, he dove instead into unlocking the mysteries of bread. The couple moved back to Franzi’s native Germany for six months, and Stephen spent half his time in Dresden under the supervision of master baker Thomas Johne.

“We came back, and Stephen never stopped about bread baking and perfecting his technique,” Franzi said. She describes the business as “almost a side-effect” of her husband’s passion for bread. 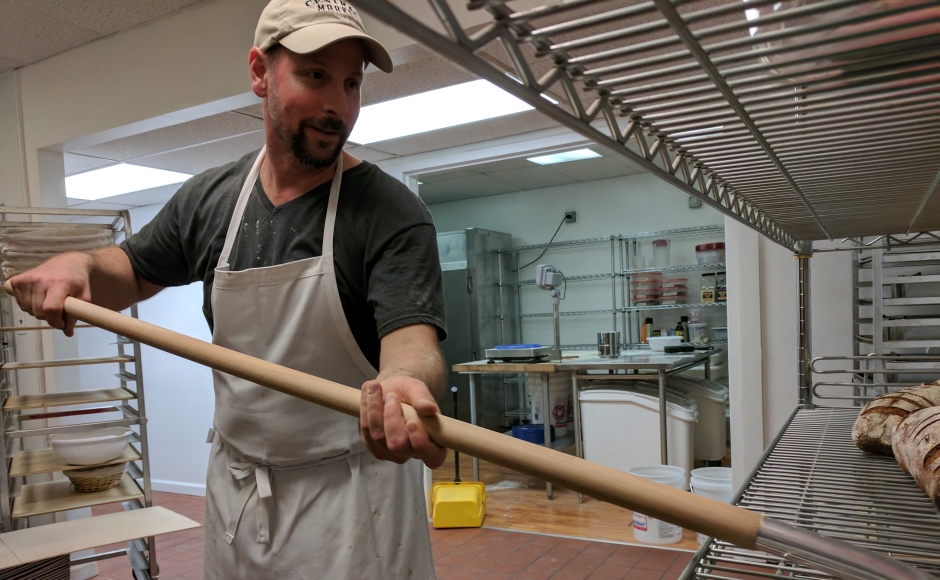 “Even before he got back, he had already looked for places where he could possibly bake and have a bakery,” Franzi said; of course, since she’s always wanted a café, “the loop closes with both of us.”

“But what it really is about is the baking,” she said.

In Germany, bread is the foundation of every meal (and most snacks).

The Kramers are taking a similarly unfussy approach to their bakery.

“This is really simple,” Stephen said. “It’s a mixer, an oven, and two hands.”

“No matter where you come from, we all eat bread,” Franzi said. “We hope with quality ingredients and decent pricing, we’re going to contribute to the betterment of the community.” 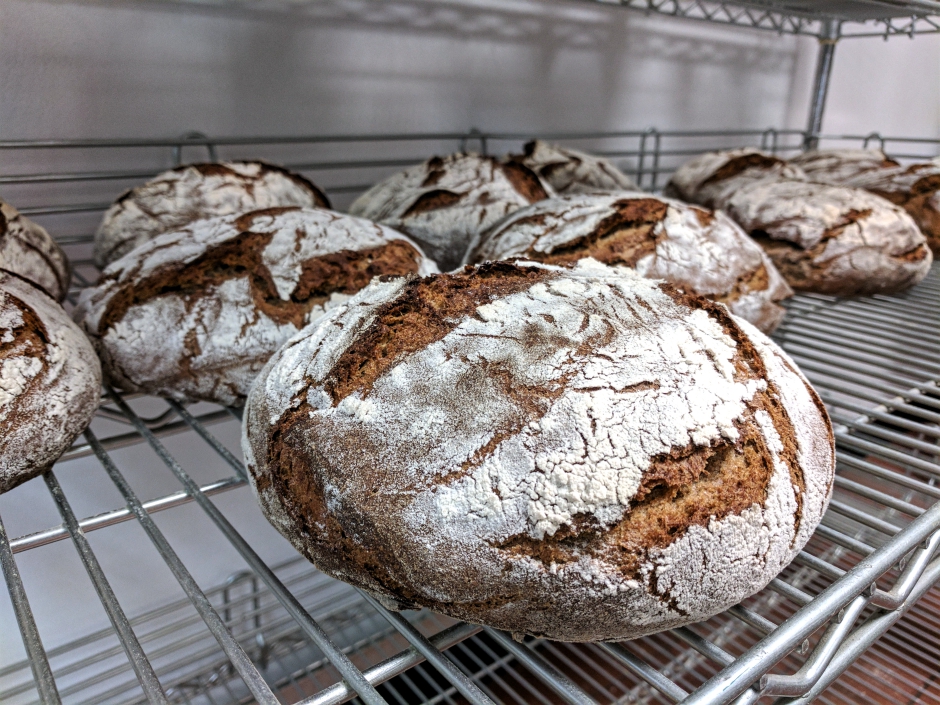 At Amber Grain, the Kramers are looking to recreate the offerings of a typical German bakery.

The leinsamenbrot, a flaxseed rye, and bauernbrot, a farmer’s bread with characteristic seasoning, are both naturally leavened, as are the whole wheat and Collingswood sourdough loaves.

There’s also an olive oil-and-honey brioche, a variation on the typically buttery French bread, four varieties of bagels, and their onion-and-poppy-seed cousin, the bialy.

Desserts, which for now are limited to chocolate-chip cookies, will include Mohnkuchen, a poppy-seed pastry that’s somewhere between a pie and a cake; Dresdner Eierschecke, a three-layer, egg custard cake native to Franzi’s hometown; and Himbeer-Baiser-Torte, a semi-sweet raspberry meringue cake. 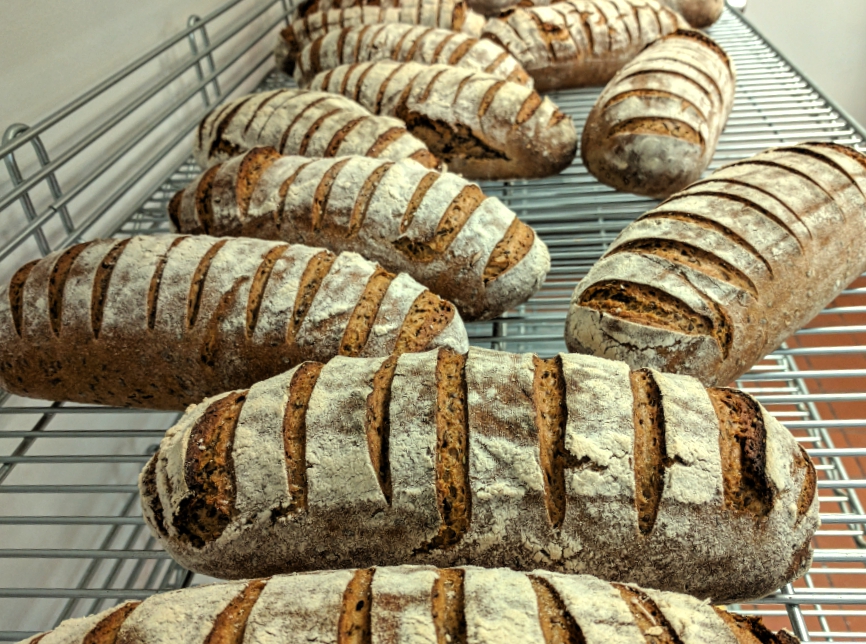 Stephen said he also plans to roll out a house granola with seeds, grains, nuts, oils, honey, salt, and cinnamon.

“We wanted to offer some things that no one has seen before,” Stephen said.

“We’re going back to basics, how bread was made a long time ago.”

Amber Grain is located at 325 Haddon Avenue in Collingswood. The shop opens its doors June 1. Hours of operation are 12 noon to 7 p.m. Thursday and 7 a.m. to 2 p.m. Friday and Saturday.