The state Economic Development Authority hopes its latest round of lease and fit-out incentives will help draw new small entrepreneurs to cities like Camden as well as supporting those already operating there. 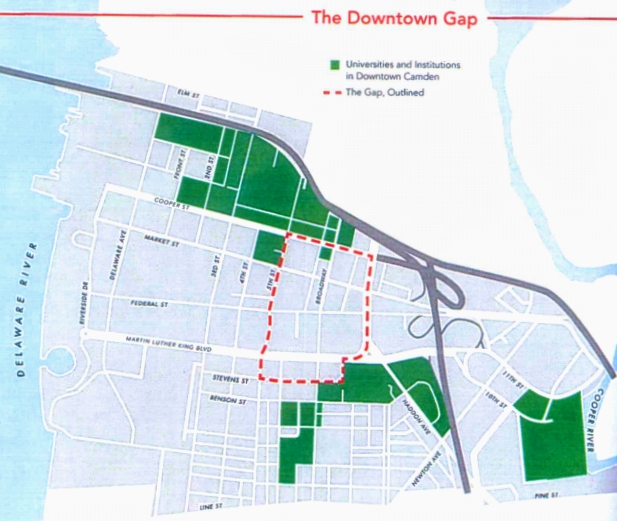 The BLI program offers two years of rent rebates for businesses leasing 500 to 5,000 square-feet of “new or additional market-rate, first-floor office, industrial, or retail space” for a minimum of five years.

The BII program will fund 50 percent of project costs for qualifying businesses to make $5,000 to $20,000 worth of improvements.

Expanding on similar grants administered in years past by the Economic Recovery Board for Camden, the BLI and BII programs are intended to spur on targeted growth in neighborhoods that are already showing signs of life.

“The programs are designed to serve as a complement to economic momentum already underway in Garden State Growth Zone (GSGZ) cities,” Lizura said.

GSGZ cities include Camden, Trenton, Atlantic City, Paterson, and Passaic; each will split $1 million in BII and BLI incentives in the next three years. 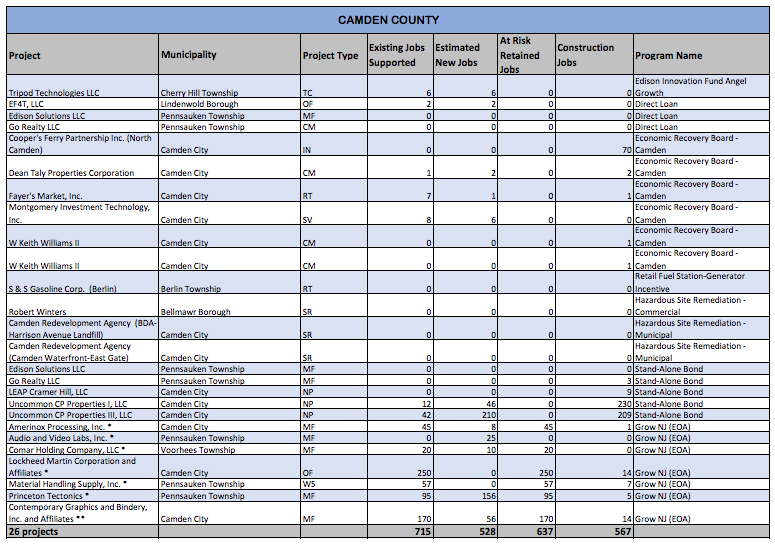 Reporting on the impact of EDA incentives in Camden City. Credit: EDA.

However, some of the bigger EDA incentives have come at the expense of small businesses, as in the case of the Haddon Farmers Market, which shut its doors on two viable businesses this summer as part of an EDA-backed DuBell Lumber project.

The agency also has recently rolled out new rules to limit potential cash-outs by companies relocating when their tax breaks expire.

Vince Basara, who coordinates the Camden City Urban Enterprise Zone, said small-business incentives have been well-received in Camden. Basare believes that “small businesses are the backbone of the city,” but said their emergence is contingent upon larger corporate pieces falling into place. Financial programs like the BLI and BII initiatives “provide an avenue for local entrepreneurs to grow and flourish now,” he said.

“In the past in Camden, you’ve seen some turnover,” Basara said. “Now, the incentives that are available, it’s a different economic climate. We’re seeing businesses sustain themselves over time. There’s customized job training; there’s employers looking for local employees.” 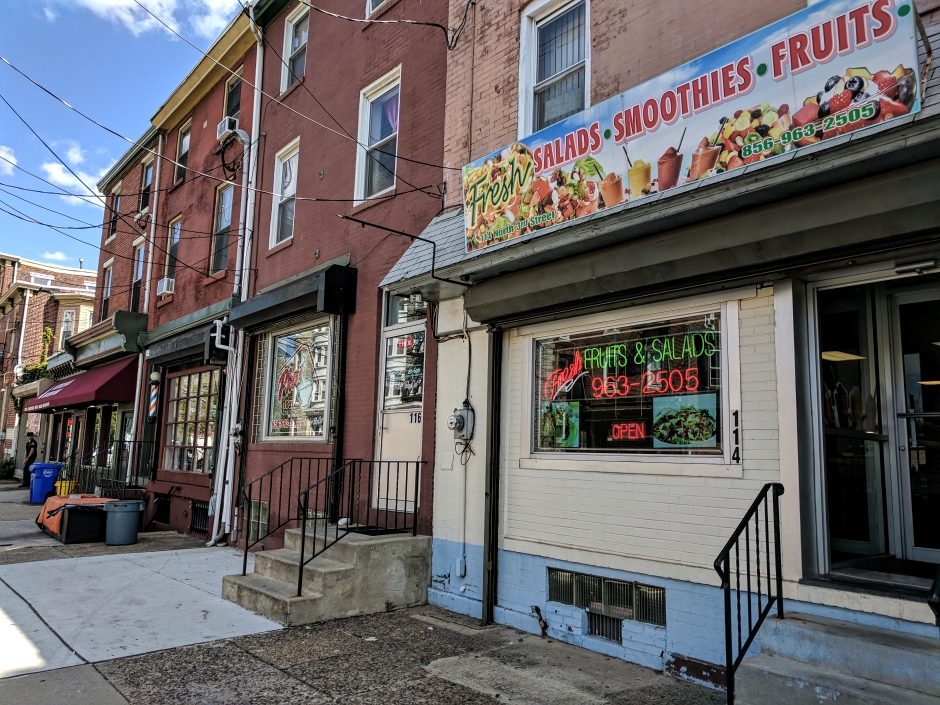 Toso’s pizzeria has been in business for 25 years, and says it’s still a struggle to help people find it in a transient city. Credit: Matt Skoufalos.

The BII and BLI investments target areas of Market, Cooper, and 5th Streets in the Cooper Grant and downtown neighborhoods, and roughly 12 blocks of Federal Street in East Camden, both districts that Basara said are primed for a boost.

“The 200 block of Market street is totally developing,” Basara said. “This is going to be a shot in the arm that can put it over the top.”

Peter Toso, who has operated A Little Slice of New York on North Third Street in Camden for 25 years, said he could use the BII cash to pay for planned renovations to his pizzeria.

Toso said he’d like to redo his countertop and refinish a dining room that sees foot traffic from a variety of customers.

“If somebody handed me $20,000, that would be phenomenal,” Toso said. “The flooring alone is worth two grand.”

At the same time, he worried about the ease of accessing the funds provided by the program. Toso said he’d had to fight to get enough money for a façade project during an earlier round of locally administered improvement grants. 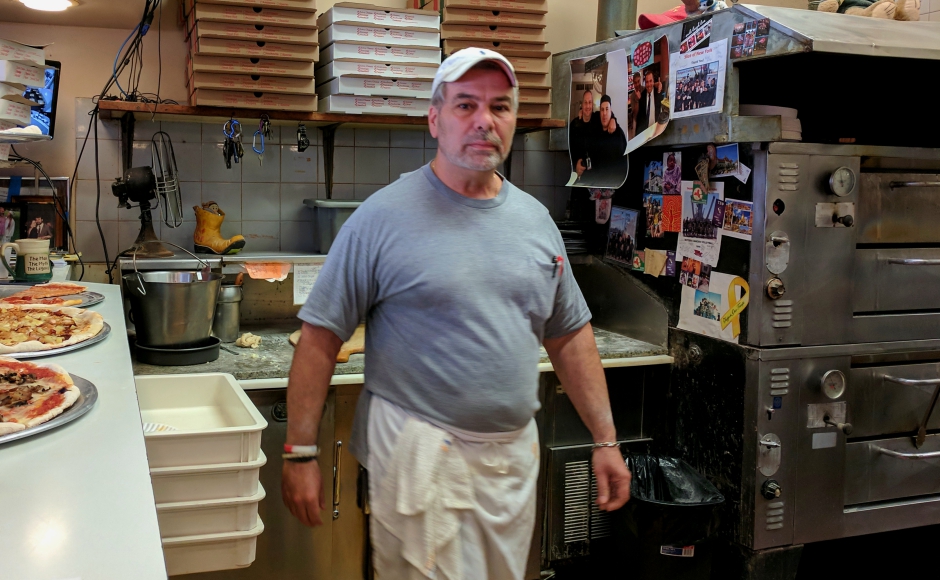 Peter Toso of A Little Slice of New York pizzeria said he’d like to use EDA incentives to renovate his shop. Credit: Matt Skoufalos.

As a property owner, Toso is ineligible for the BLI program.

Still, he said he could use some relief from recent reassessments that quadrupled his property taxes, and which he retained an attorney to dispute.

“My property value was low, but not four times,” Toso said.

“When you do the comps, the comps don’t [match]the reassessment.”

Challenges like these make it hard to stay in business, and even harder to open a new shop. Many of the longest-lasting storefronts have enjoyed generational ownership, he said.

“Camden is such a transient city,” Toso said; businesses like his “have to constantly reeducate people.” Even bordering the populous university district, it takes students “three years before they find anything because they’re so isolated on the campus.

“It’s a tough sell,” he said. “You have to constantly be putting [your business]in people’s faces.” 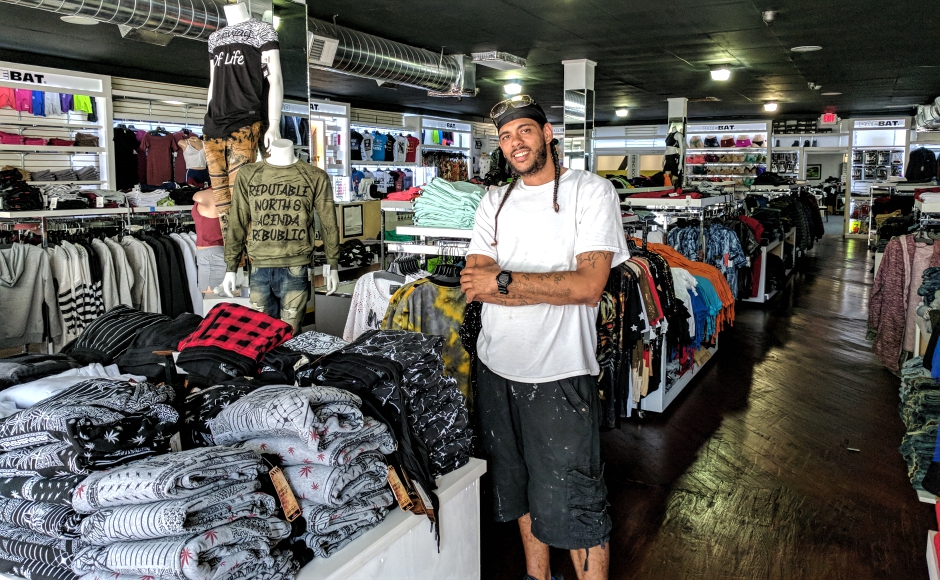 The Federal Street commercial corridor in East Camden is a patchwork of eateries, pharmacies, florists, and barber shops broken up by retail stores and corner stores.

There’s steady foot and vehicle traffic, and a lot of competition for shoppers’ interests.

Anthony Player an employee at DAE BAT, a clothing store in the 1500 block, said business is usually steady, but work can be difficult to find.

A lifelong Camden resident, at 34, he said the city is “getting a lot better,” but its economy needs to improve to “give people more chances to survive.

“Nobody’s money’s going up,” Player said. “People around here need any job; something stable that pays, that you can live off of.”

Although the EDA program could inspire start-up businesses, Player said doesn’t think the money would be enough on its own without some formal training.

“A lot of people might know what they want, but they might not know how to go about it,” he said. “They need that education.”