Heightened fears about school violence are provoking conversations about emergency planning, community culture, and how to preserve small-town living in a world of credible threats. 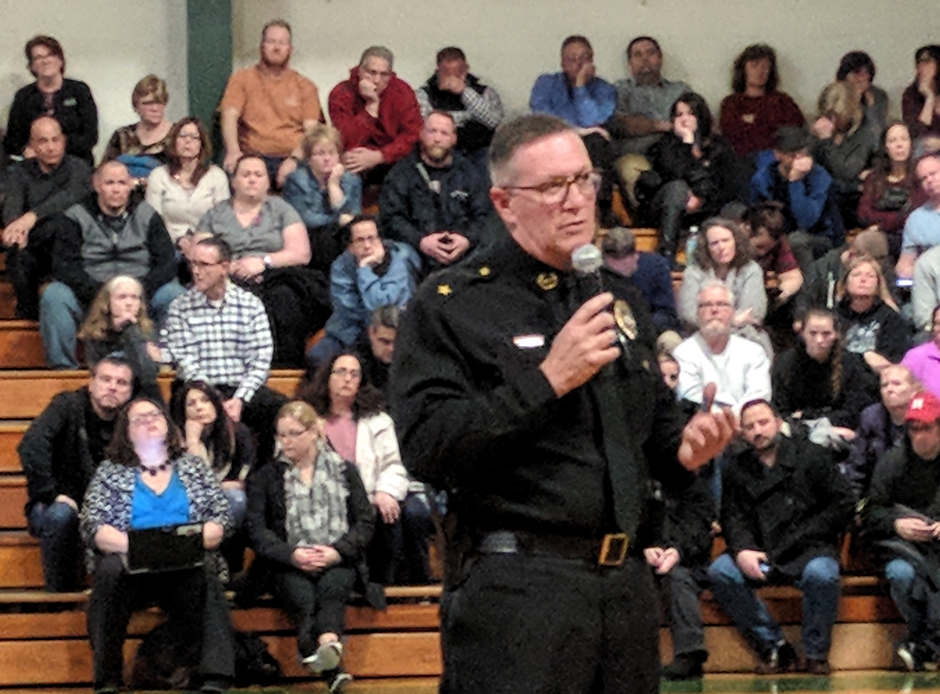 New Jersey hasn’t had a shooting in a school since 1975, when a Penns Grove man killed a principal and wounded a second-grade teacher at St. James Regional Grammar School, as reported in the New York Times.

In the 43 years since, school shootings have become far more commonplace throughout the country.

And in small, close-knit towns like Audubon, families are hyper-vigilant for any sign that something is amiss.

So much so, that on Monday, an instagram post from a teenaged provocateur sent police into action.

Audubon Police Chief Thomas Tassi said the video was produced by an 18-year-old “kid that we’re aware of.” He described the footage as depicting the man “twirling a gun and doing a little gangster pose in front of a car that wasn’t his.”

“There was no threats whatsoever,” Tassi said. “With everything that was going on, those images in people’s minds was an implied threat. I told my officers, ‘I want the guy, and I want whatever he had in his hands.’”

It turned out to be an Airsoft pellet gun.

The same individual, who reportedly is enrolled within the district, but does not attend its high school, sent the community into fits again the following day when he allegedly turned up looking to resolve some paperwork and was escorted off its premises.

The school fielded enough inquiries about the encounter to issue an all-clear mass message to parents, and the police department posted a public statement trying to curb the chatter:

No charges were filed in the incidents. No arrests were made. No laws were broken. And both police and school say the incidents demonstrated how they want to handle suspicious behavior going forward.

It didn’t stop parents from talking about it. Even when things function as they should, the anxiety is still there.

“Everybody should be applauding the whole process,” Tassi said. “Students saw something, they immediately went to the school. The school notified us. Exactly what we want. We take action on it, it’s deflated.” 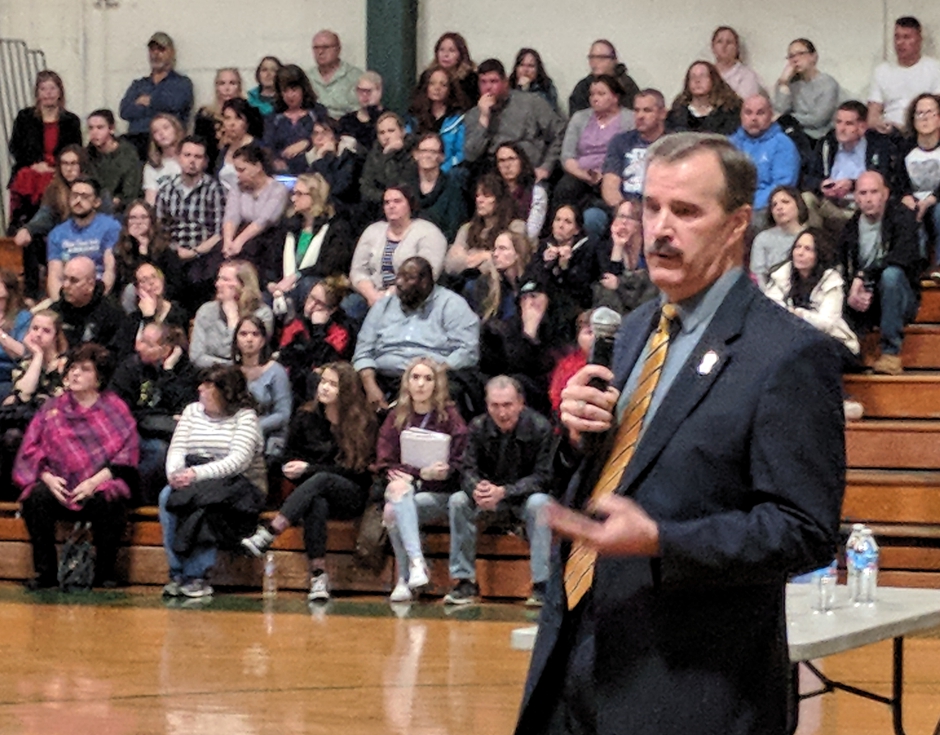 James Corbley of the NJDOE Office of Fiscal Accountability and Compliance speaks about school security in Audubon. Credit: Matt Skoufalos.

Corbley spoke before a gymnasium full of Audubon families at a security-focused town hall held Tuesday evening at the high school.

Statewide regulations are intended to create a consistent, predictable, and appropriate response to situations of extreme danger, he said.

Drills help to identify problems; training mitigates risk. The routine is intended to save lives by having staff and students practice what is expected of them in an emergency.

“People get hurt, but we want to protect the largest number of people that we can,” Corbley said.

No single factor leads to school violence, he said; rather, a combination of circumstances at home, in school, and the community at large, all play a part. Individual complications, like mental health concerns, or access to weapons, are further complicating factors.

‘People have the opportunity to intervene’ 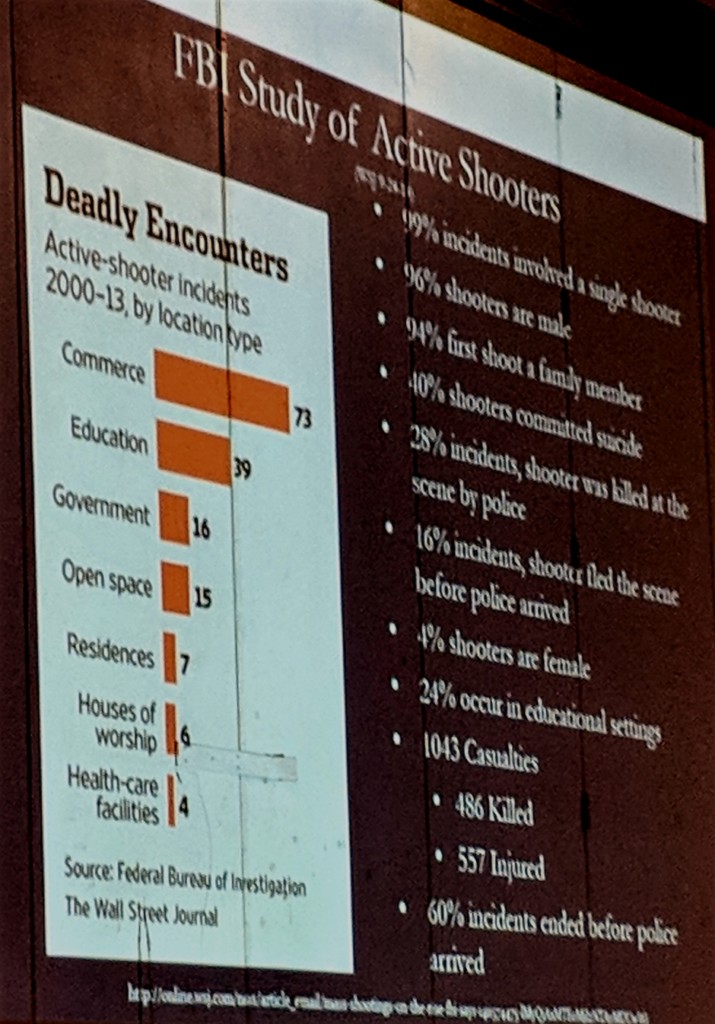 An FBI study of 160 mass shootings from 2000-2013 showed that 99 percent involved a single shooter; in 94 percent of them, the individual killed a family member first.

Males are responsible for 96 percent of the shootings. Businesses and schools were the top two locations in which such an incident most frequently occurred.

Corbley said that in 80 percent of shootings, at least one other person knows of the shooter’s plans, and at least two other people know 60 percent of the time.

Ninety-three percent of those are peers of the shooter.

“That’s the chance where people have the opportunity to intervene.”

He asked parents to pay attention to their surroundings, to their sons, and to their sons’ friends. Students should be encouraged to report suspicious information to their parents and to authorities, and “don’t hold anything back.”

Most of the discussion involved the balancing act of wanting to create an airtight safety environment without compromising on the neighborliness that makes Audubon a close-knit community.

“What we’re going to have to do is identify how far we’re going to go on that scale between open facilities and the absolute tightest security we can get, which closes people out. I think a community has to be part of that decision.” 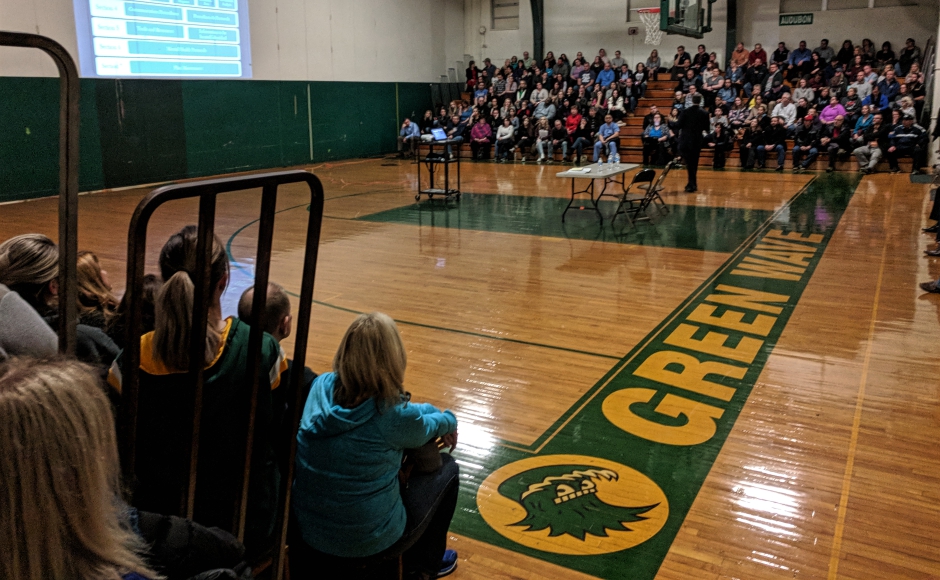 Tassi said his department struggles with that responsibility as well.

He pointed out that most of its 17 officers grew up in town; several have children in the school system, and are intimately concerned with its safety.

“We’re the ones testing the doors” during a lockdown drill, Tassi said.

“We’re the ones trying to find the weaknesses.”

Tassi added that he’d like to see the school district beef up its security, and opined that it might take a bond referendum to make the necessary facilities improvements.

“At some point, we’re going to need to go out to a capital bond and do the right thing,” Tassi said. “There’s a lot of things out there that I would like to see done.”

The chief spoke about wanting to upgrade cameras and in-school communication systems, creating more uniformity among school entrances, and upgrading its doors and windows — “things that buy us time” in the event of a security breach, he said.

Goldschmidt said he’d like to see what the district can do out of its normal operating budget first. Actions that could immediately improve security include trimming back overgrown bushes, upgrading exterior lighting, and improving signage to direct visitors to a single point of entry.

Audubon Mayor John Ward said that in the past two weeks, borough commissioners amended local law to allow for the hiring of Class III officers—retired New Jersey police officers younger than 65—for school positions. Class III police do not draw benefits or pensions and are limited to part-time hours.

Ward said the district hasn’t requested them yet, but the borough is ready to act if it does.

“The school would have to want that,” he said. “That shouldn’t stop us from working on a plan.” 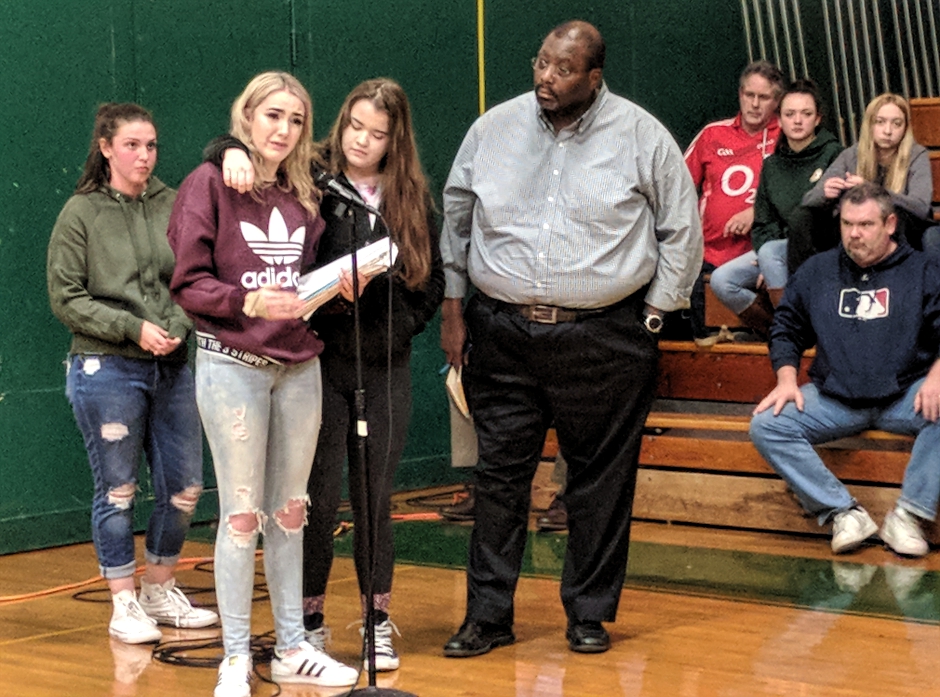 Audubon Senior Aeryn Coker, supported by classmates as she speaks about bullying in the school. Credit: Matt Skoufalos.

Ward, who is the administrative director of safety for the Cooper Health system, said he’s undecided as to whether Audubon schools needs armed security officers.

He stressed that any plan “would have to be developed with the school.

“I went to all these schools; our security is way better than it ever has been.

“There are levels of security that not every parent sees or understands.

“We could make it a prison and spend tons of money to do that,” Ward said. “All we can do is target-harden, which we have, and prepare for the worst, which we are.”

At least one student asked the district to consider that its security efforts could be better focused with an inward eye. In the packed gymnasium, senior Aeryn Coker fought back tears as she spoke about being bullied in the school.

“You’re all concerned about our physical safety, but what about our mental states?” Coker said. “This is the real threat against us every day.

“They know the pain some of the students inflict on others,” she said. “Nothing happens with these kids who make us feel unsafe in our own schools. Nobody’s going to listen if we don’t call out what happens.”