Peter and Charlie Coriell of Moorestown were too young to know their famous physician grandfather before he died, but this summer, they’re interning at the research facility named in honor of his work. 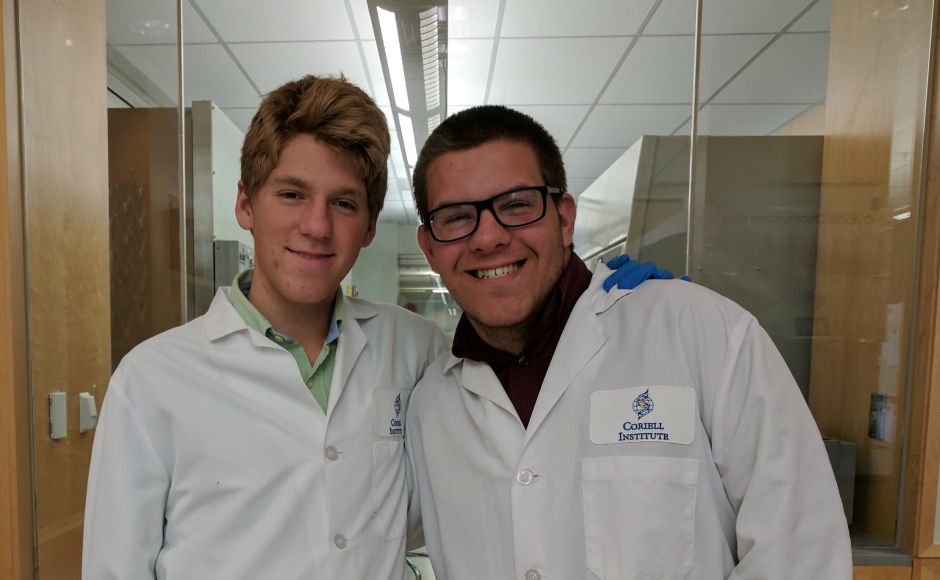 The science of heredity is front and center at the Coriell Institute for Medical Research in Camden City.

Established more than half a century ago by Dr. Lewis Coriell, one of the chief virologists who contributed to the development of the polio vaccine, it has emerged as a world leader in genetic research and a cultivator of biological materials used in scientific study.

And for the first time, this summer, Dr. Coriell’s descendents—grandsons Peter and Charlie, both 17, of Moorestown—are continuing the work he began decades ago.

They were still babies when their grandfather died in 2001, on his 90th birthday. Stories about their famous ancestor came down through their family, or popped up in textbooks occasionally. But through their internship, the Coriell kids encountered some of the employees he’d hired, pored over press clippings that celebrated his work, and immersed themselves in the world he built.

“We knew that our grandfather founded the institute,” Charlie Coriell said. “We knew that he did clinical trials in the hospitals, and we knew he tried to cure polio.

“He laid this foundation of having all these scientists come together and create this one goal, and he pushed it through.”

For 37 years, the institution has sponsored the tri-county Coriell Science Fair, which invites applicants from grades six through 12 to show off their scholastic chops. And in school, the Coriell boys would be asked, “What does that have to do with you?” Peter Coriell said. 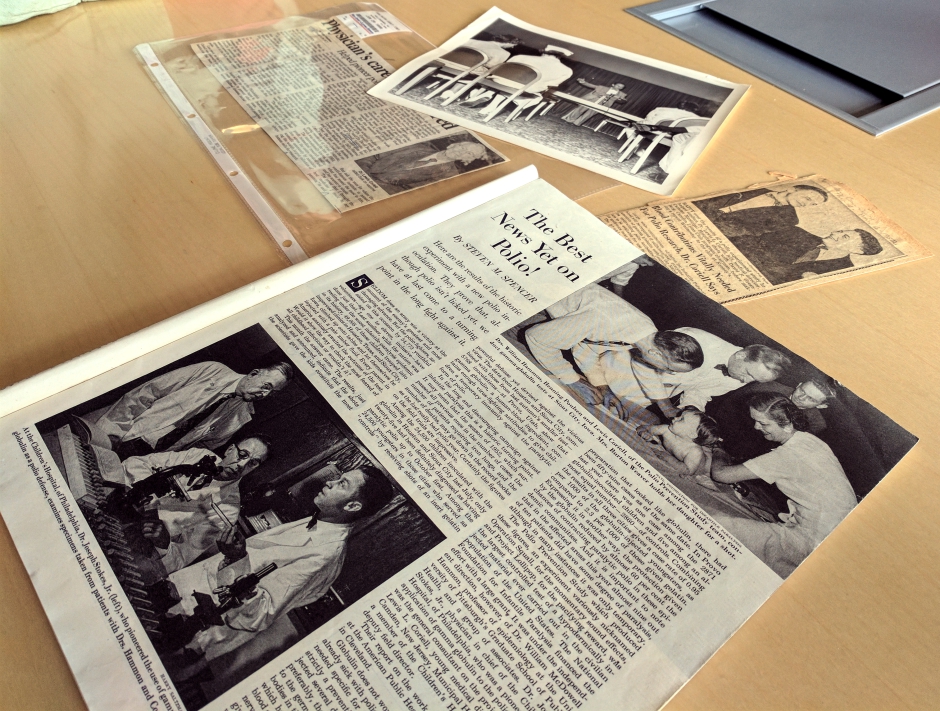 For one thing, they both grew up with an avowed interest in the sciences.

Charlie was fascinated by natural sciences like meteorology, astronomy, and marine biology, while Peter liked cosmology and engineering.

Studying at the lab that bears their family name nudged those interests more firmly towards biology.

“I’ve been interested in science for my whole entire life,” Charlie Coriell said.

“I know that biology is a really good path for me. My grandfather thought it was really important to cure diseases. I thought it was cool to have that legacy.”

“I knew I wanted to do medicine for a longer time than [Charlie]  did,” Peter Coriell said. “I thought learning about space would get me into engineering, and this year, I went here, and I thought this would be better.”

The Coriell internship program is open to high-school and college students. Participants spend a month studying microbiology, stem cells, cell genetics, and cell culture with lab technicians at the institute. They’re also given time with each of the other front-office departments, but as rising high-school seniors, exposure to a professional scientific environment offered Peter and Charlie opportunities to perform lab work at a level they’d yet to experience.

“I have a big appreciation for the amount of scientific work that goes into these procedures,” Charlie Coriell said. “It used to be really hard. With a few days of practice, it’s become really easy. I know how to insert the liquid and the buffers and other ingredients into cell tablets.”

“In high school, you don’t get the hands-on experience,” Peter Coriell said. “You’re doing what real scientists do in the real world. It gives you the feeling of what it feels like to be one of these people.”

“This hands-on experience would be totally beneficial for what I do, whatever career path I take,” Charlie Coriell said. “The knowledge I carry on will be great for the rest of my life.”

Peter’s favorite experience from the internship has been studying karyotyping, the science of identifying chromosomal abnormalities; Charlie likes the cryogenics lab. Both are processes that were advanced by the work of their late grandfather, who pioneered sterile processing and cryogenics laboratory techniques. Today, the Coriell Institute focuses on advancing that research to improve the science of healthcare through personalized medicine, said CEO Mike Christman. 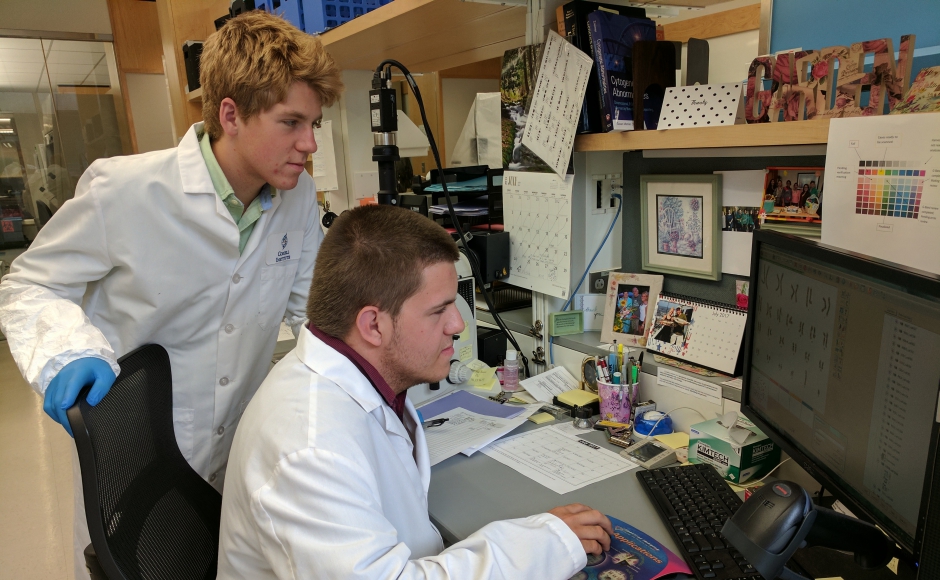 “People vary a lot in the genes that affect drug metabolism,” Christman said.

“Drug companies want us to assume that when a pill is approved, it works on everybody.

“Really, there’s about a 50-50 chance that a prescription drug would be useful to a specific person.”

Christman describes Lewis Coriell as “a very significant scientist,” whose focus on sterile laboratory practice enabled the cultivation of human cells in a stable medium. That achievement “solved a very important clinical problem,” which led to the rapid production of Jonas Salk’s polio vaccine.

“Back then, you couldn’t realistically do research on human cells and figure things out about how drugs worked if you couldn’t grow the cells in a petrie dish,” Christman said. “In order to generate enough of the vaccine to realistically inoculate a population of millions, you had to be able to grow enough of the virus to do it. The only way to do that was to grow cells in a dish and infect them with the virus.”

“[Lewis Coriell] was very key in solving that problem, and was also involved directly in the demonstration that the vaccine was effective in massive amounts of people,” Christman said.

Dr. Coriell also cultivated relationships with other prominent scientists, which led to the establishment of his research institute as one of global renown. That it has stood long enough to welcome his grandchildren as young men is simply a bonus, but one that mattered a lot to their mother, who wrote Christman to thank him for the opportunity.

“[Peter and Charlie] got in on their own merits, but that was very nice,” Christman said. “It was clearly important to her to maintain this legacy.”

“Most people say, ‘Oh, you’re the grandsons right?’” Peter said. “One of the scientists told us all about our grandfather and how much she liked him.

“I wonder about him,” he said. “I want to follow in his footsteps.”