Trending
You are at:Home»Business»Audubon’s The Treehouse Owners to Sell

After accepting a full-time pastorship at First Baptist Church of Pitman, Randy Van Osten says he and his wife, Tina, are looking to pass along their 14-year-old coffee shop to the right buyer. 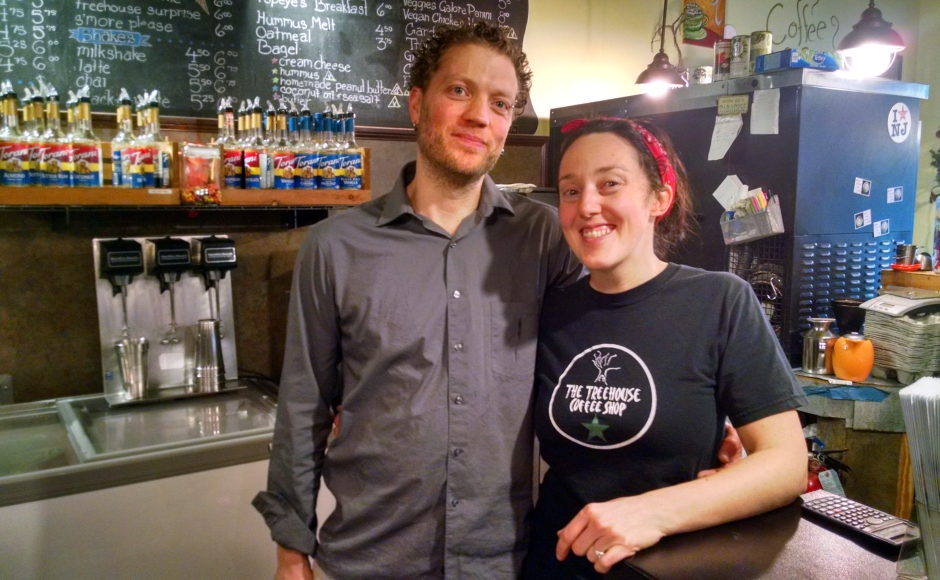 The Treehouse owners Randy and Tina Van Osten are looking for the right person to take over their business. Credit: Matt Skoufalos.

For about six months, Randy Van Osten has been answering big questions about the future of his Audubon coffee shop, The Treehouse.

Was it true he was going to close? Was the family leaving town?

Talk had heated up since Van Osten completed a seminary program he’d begun in 2014.

After finishing his coursework, a calling deferred from 2008, when The Treehouse relocated from downtown Collingswood to downtown Audubon, Van Osten had begun working with the First Baptist Church of Pitman.

Parishioners and customers alike suspected it was only a matter of time before he’d be quitting the business for good, but Van Osten assured them that nothing like that was on the horizon. Besides, he said, First Baptist of Pitman didn’t have the resources to bring him on full time.

And then, all of a sudden, they offered to do just that.

“We were really taken by surprise,” Van Osten said. “In the last year, we were trying to figure out what to do. We kept our options open, hoping to stay in the area, and came upon Pitman. It felt like it was the perfect fit.” 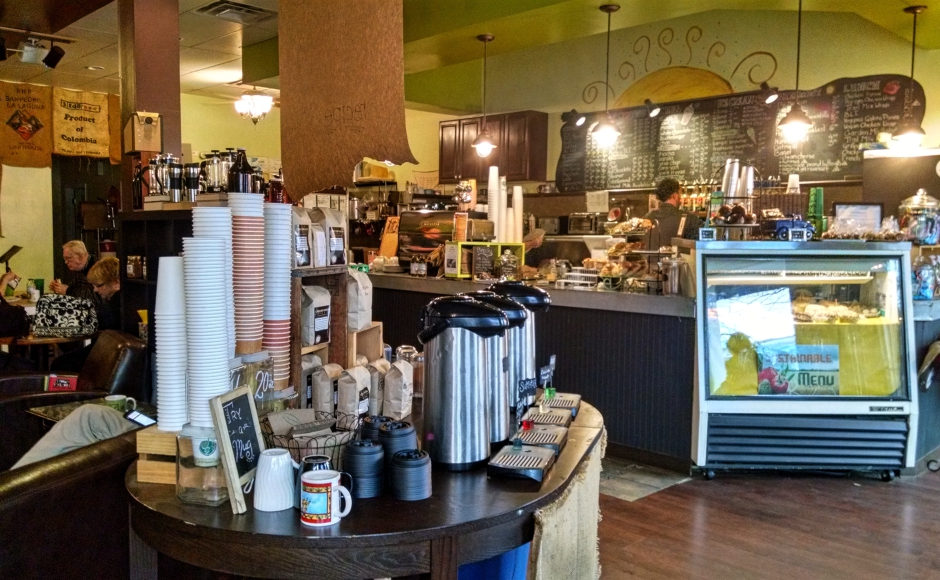 If all goes as planned, Van Osten will be voted into his new role by the Pitman congregation next Sunday.

And although church and coffee go hand in hand, there’s no way he can manage overly full work weeks at The Treehouse and do the community-driven work of a full-time pastor in a town 15 miles away.

His wife, Tina Van Osten, splits her weeks up similarly, working part-time at The Treehouse and part-time at UrbanPromise Academy in Camden, where she teaches environmental science and biology.

The couple also has two sons, Mateo and Liam, who’ve grown up in the coffee shop their parents founded 14 years ago when they’d first started dating. Raising a family in the family business while heeding a spiritual calling had started to take its toll. So, in addition to selling The Treehouse, the Van Ostens will be relocating from West Collingswood Heights to Pitman, the better to integrate within their new parish and settle their kids in the school district there.

For the couple, who both graduated area high schools—Randy from Audubon and Tina from Collingswood—it’s a move out of the area in which they’ve lived since they were teenagers.

“We feel like in the last year we haven’t been able to give our all because we’re split[ting our focus],” Randy Van Osten said. “For a business to thrive, it really needs somebody that has the vision and the passion. I think we’ve taken it as far as we can personally. We could use somebody who has fresh eyes.”

Tina Van Osten said that the couple is looking to sell the business to “someone who has a heart to care for people.” 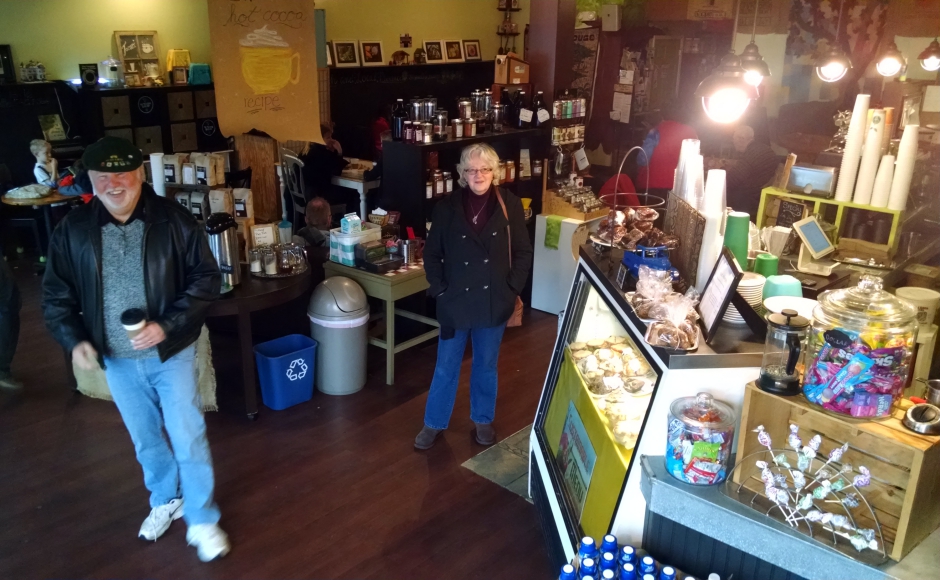 Guests at The Tree House include regulars who’ve patronized the business for years. Credit: Matt Skoufalos.

“We struggled because we want to be there for people, but we haven’t been able to figure out how to balance that with managing and running a restaurant,” Tina Van Osten said.

“Maybe somebody else could do it better.

“I feel like people come here and it’s a little bit different, and they can be who they are, and that’s okay,” she said.

“It’s a safe place, but we can’t do this for two more years.”

The Treehouse was founded as a place “where people can experience God’s love, God’s peace, God’s joy, without having the word of God shoved down their throat,” Randy Van Osten said.

“We would love for someone to have that same kind of vision; that same kind of thought,” he said. “We had always thought about the process of passing the torch to someone, but we hadn’t heard God’s voice clearly in all that. Opportunities kept arising, but it wasn’t the right time or plan.”

The first time the family thought of selling the business was in 2008, when the economy took a turn for the worse. Instead, they moved The Treehouse from Collingswood into Audubon, Tina delivered Mateo, and Randy dropped out of seminary. It was another six years before he was able to return to theological school.

In that time, however, the relationships they shared with customers deepened to a familial level, which has only made the decision to move on from the business that much harder. The Van Ostens worked to cultivate The Treehouse as a place where every kind of group is free to intermingle, and where families with children were as welcome as students, seniors, teleworkers, and visitors of all faiths.

“You don’t find too many places where everyone feels welcome,” Randy Van Osten said. 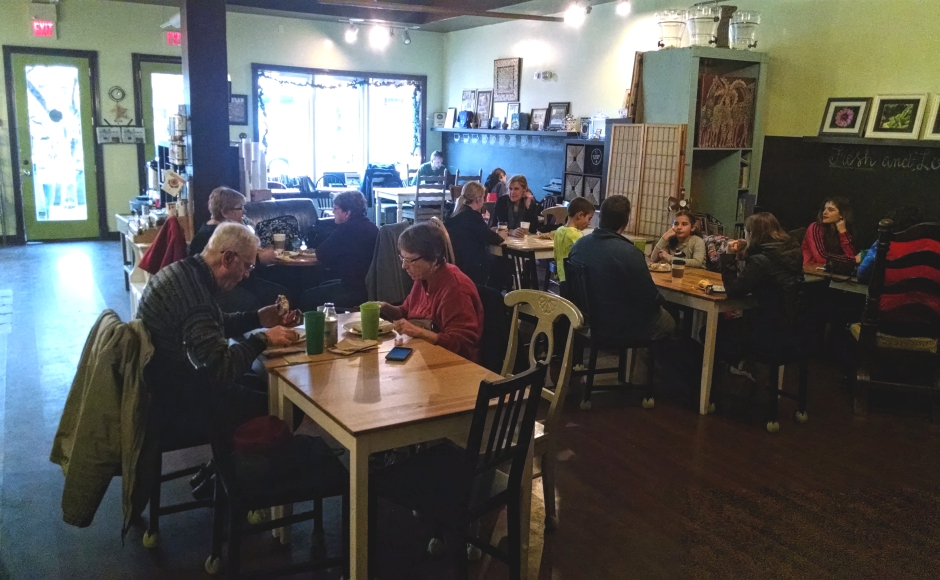 The Tree House garnered a reputation for inclusion by catering to families with and without children, seniors, students, and more. Credit: Matt Skoufalos.

The couple’s lease is up in May. In the months to come, they are seeking a buyer who will follow their intention for The Treehouse to persist as a place of inclusion and peace.

Tina Van Osten said the building’s owner would love for The Treehouse to continue in its current location, and that the business could possibly shift into a mobile form, which would allow for keeping its popular, weekly stall at the Collingswood Farmers Market.

In the few days since announcing the news on Facebook, at least seven different expressions of interest have surfaced, which Tina Van Osten said gives her hope that the couple will find the right buyer.

“The good news is that I think with that much of a response, somebody’s going to take this on and see it through,” she said. “That makes me feel so much better.

“It felt like this huge weight lifted,” Tina Van Osten said. “I didn’t want to hurt anybody.”