Trending
You are at:Home»Arts»Author Alicia Bessette Returns to Collingswood May 17 with ‘Smile Beach Murder’

Bessette and her husband, Silver Linings Playbook author Matthew Quick, began their fiction writing careers in a Haddon Avenue apartment more than a decade ago. 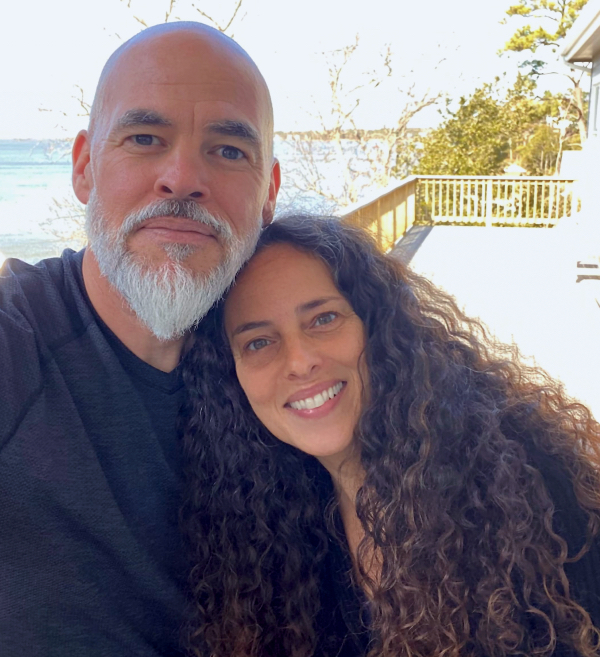 In the early 2000s, Alicia Bessette was writing features for the Bryn Mawr college alumnae bulletin, and living with her husband, Matthew Quick, above a Haddon Avenue gift shop in downtown Collingswood.

The two had both stepped away from careers in education to pursue writing full-time, eventually returning to Bessette’s Massachusetts hometown for a few years to live with her family and save money while they worked.

Quick found success first, selling the movie rights to his debut novel, The Silver Linings Playbook, even before it saw print.

A few years later, Dutton published Bessette’s Simply From Scratch, a story about a friendship between a young widow and a neighbor girl united by loneliness and baking.

But while Quick’s subsequent works found traction in the young adult literary sphere, the same level of success was slower to come for Bessette. She continued to forge ahead creatively, releasing a series of solo piano albums and working as a journalist while polishing up subsequent manuscripts.

All the while, the couple leaned on one another as they continued to pursue their dreams, finding strength in their shared understanding of the effort required to thrive in the prove-it publishing industry.

“The stresses of the writing life are pretty specific,” Bessette said. “It is advantageous to be married to your best friend, who happens to know, first-hand, what the rollercoaster of publishing is like.

“It’s taken us years, but we really have gotten pretty good at being able to support each other in a special kind of way,” she said. “We know each other’s hearts so well, and we know what the other person wants to put into the world, and we can reflect back whether you’re succeeding or not. That is a real gift.”

In 2014, Bessette and Quick relocated to the Outer Banks of North Carolina, where his family had often vacationed. As much as Silver Linings Playbook is anchored in place to Quick’s upbringing in the Philadelphia metro area, the natural beauty of the barrier islands and their local color proved fruitful inspiration for Bessette’s work.

“It’s an interesting place,” she said. “There are a lot of characters here. There’s an Outer Banks expression—‘the nuts roll to the edge’—in reference to the eccentric people that it seems to attract, and I say that with a lot of fondness.”

The region is replete with historic lighthouses, which loom several times larger than the watchtowers that dot the New England shores of Bessette’s youth. On a trip to Bodie Island, she found herself struck first by the vantages that such heights afford—and then immediately thereafter by the precariousness of appreciating them. 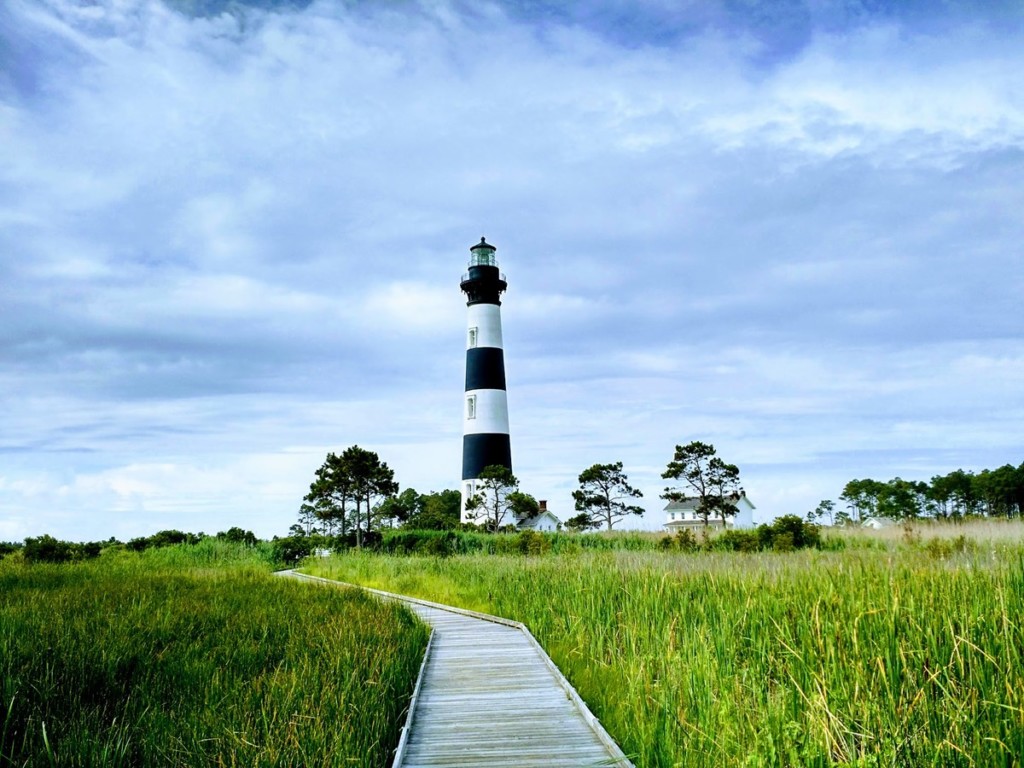 “I was up at the top, taking in this beautiful postcard view of this place where I live, and I had this really dark thought,” Bessette said.

“Two hundred feet is this really high distance to fall from, should something go wrong.

“I thought, ‘That’s a really interesting idea for a murder mystery,” she said; “so I filed that thought away.”

The seeds of that notion, and another, about the romance of a dormant message in a bottle, took root in the sands of her imagination, and eventually sprang up as Smile Beach Murder, Bessette’s inaugural title with Penguin Random House.

It’s the first in a series she’s calling the Outer Banks Bookshop mysteries; she just filed the second, Murder on Mustang Beach, with her publisher for release next spring.

Smile Beach Murder is a “cozy mystery,” a literary genre so named for the warmth its small-town setting and reliable tropes typically impart upon readers.

“A cozy mystery leaves you with a cozy feeling when you finish it, and part of that is due to these characters that recur with every book,” Bessette said. “You get to know them, and they become old friends.”

Despite dealing with the consequences of violent crimes, “cozies” are light in tone, with as much emphasis on the community that’s been disturbed by a wrongful death as on the incident itself. Amateur detectives follow meandering breadcrumb trails through tranquil settings to which readers enjoy returning for satisfying endings in subsequent episodes.

“A trope of the genre is there’s going to be a happy-for-now ending,” Bessette said. “You’re going to close the back cover and know that these people are okay—until the next body shows up. It’s about love and relationships.”

Some of Bessette’s favorite cozies include Lillian Jackson Braun’s The Cat Who books and Agatha Christie’s Miss Marple series; she credits Mary Higgins Clark with inspiring the up-tempo pace of Smile Beach Murder.

Bessette’s protagonist is 38-year-old Callie Padget, a reporter who returns home to Cattail Island in the Outer Banks of North Carolina having just been laid off from her reporting gig at a large urban daily newspaper. 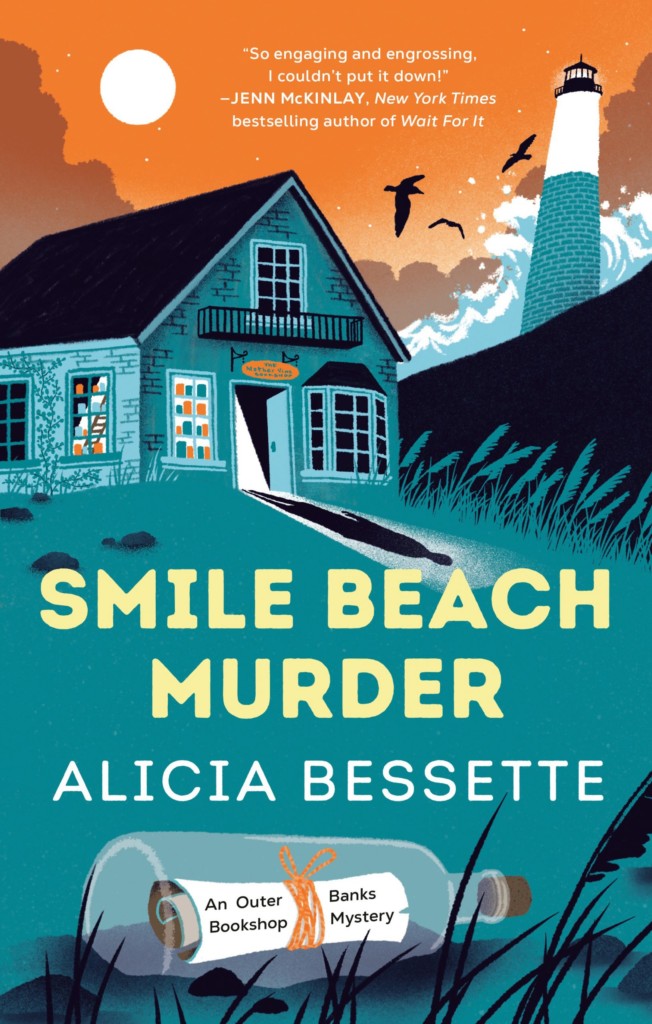 At the outset of the tale, Padget is hoping to lay low in her hometown for a few days to regroup. Instead, she gets swept up in the mysterious death of an old friend—which strangely resembles the circumstances surrounding her own mother’s death—and sets her mind to seeking justice.

Regulars include Hudson, Callie’s curmudgeonly, woodworking uncle; Toby, the good-looking martial artist to whom she takes a shine; and Antoinette, owner of the Mother Vine book shop, where Callie finds work.

There’s also Tin Man, the bookshop cat, who’s Instagram-famous, and may or may not have some psychic abilities that guide the novice sleuth along her way.

Inasmuch as Callie’s love of books mirrors Bessette’s own, it was the author’s willingness to embrace the cozy mystery genre in specific that proved to be the catalyst for her fiction career.

“On and off over the years, I’ve gone back into all mysteries as a reader,” she said.

“In the past 10 years, I’ve been writing novel manuscripts, women’s fiction, fantasy, and not having any luck getting them published. I just couldn’t get them past the gatekeepers.

“I was having a conversation with Matthew about what to try, and he said, ‘You read cozy mysteries, why not try writing that?’

“There’s a lot of darkness in the world, and when I asked myself, ‘What do I want to contribute in the world?’ it was not more darkness,” Bessette said.

In support of Smile Beach Murders, Bessette and Quick will return to Collingswood on Tuesday, May 17, for a conversation at the borough public library. Quick will interview Bessette about her work in what she promises will be “an extemporaneous event.

“He’s refusing to tell me what questions he’s going to ask,” Bessette said.

Registration prior to the event is requested; copies of Smile Beach Murder will be available for purchase at Ida’s Bookshop in Collingswood.

“Really, we just wanted to come home,” Bessette said. “We have tons of fond memories, and we are really looking forward to visiting Collingswood and seeing some old friends and family. I’m looking forward to taking a walk around Knight Park.”

If those aren’t the makings of another cozy series, they’re at least the foundation for a nice return visit.