When the going gets tough, the tough make pizza. 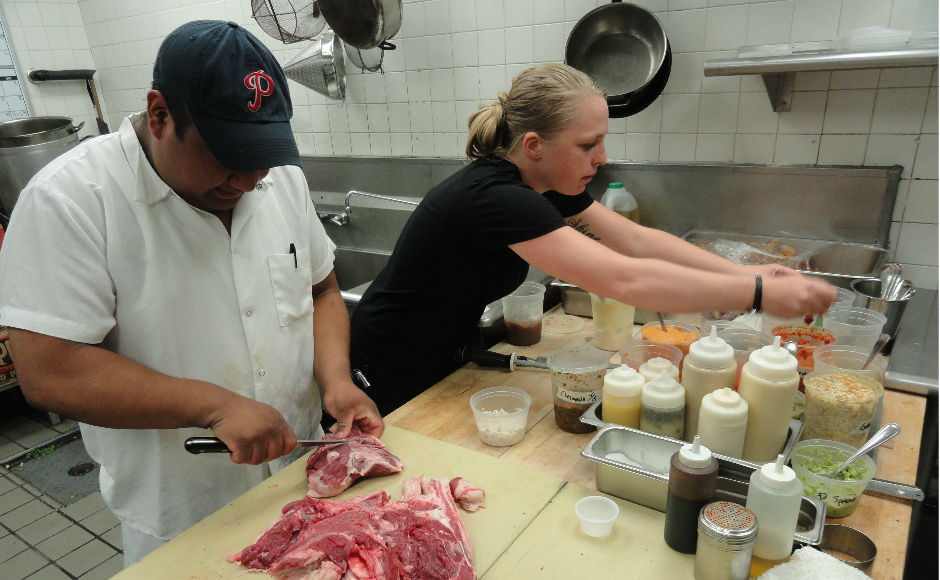 In the kitchen at Farm and Fisherman in Cherry Hill. Credit: Matt Skoufalos.

Like all small business owners trying to keep up with the changes during the novel coronavirus (COVID-19) pandemic, public health restrictions and spiking caseloads have forced chefs Todd Fuller and Josh Lawler to re-evaluate every aspect of the operations at their Cherry Hill tavern, Farm and Fisherman.

“I think we were fortunate to go into this [circumstance]  not being day-to-day, which is what I feel a lot of restaurant people are forced to do,” Fuller said.

“We were lucky that way, [but]  we’ve [also]  always managed the business conservatively,” he said.

Yet even as outdoor dining benefited from cooperative weather patterns, and limitations on indoor dining were rolled back, customers were slower to return in person. As the chefs began brainstorming ways to get them back in, all signs pointed to expanding their a la carte menu.

While the duo kicked around the idea of serving takeout-friendly Chinese or Mexican dishes, Fuller, who had once headed up Treno pizza bar in Haddon Township, eventually pitched his partner a pizza pivot. Lawler agreed, and they both set to work.

Even with decades of experience between them, the work of creating a reliable starter dough literally meant starting from scratch. In professional kitchens, most house recipes are closely guarded secrets, the details of which are revealed to staffers slowly, over months or years. Fortunately for Fuller and Lawler, pizzaiolos are more generous with their information.

“There’s so much honest sharing of information in the pizza world,” Fuller said. “As two chefs who’ve been around for a while, for people to just tell you what they do blows my mind.”

In addition to reading and researching, the pair said they benefited the most from getting their hands into some dough and seeing how it performed. After lots of trial and error (“I think we were in gluten shock the first two weeks,” Fuller said), they settled on a process based around poolish, a yeast-cultured dough that traditionally provides the backbone of baguettes.

Fuller described it as “a more controllable version of a true starter” that can be made daily, as opposed to doughs that require a multi-day proof, and which can present greater variability.

“In my opinion, it achieves the same results: depth of flavors, character to the bread,” Fuller said. “This helps to eliminate those headaches without sacrificing the quality.”

“We played with the dough, the oven, the temps, the controls,” Lawler said. “We’re making dough that will work for us, and we have room to store it.”

Their plain cheese pie features a combination of Ovoline fresh mozzarella, low-moisture mozzarella, and pecorino romano for a touch of added salt. Forgoing fresh basil leaf as a topping, they instead add finely diced bits of the herb to their tomato sauce. 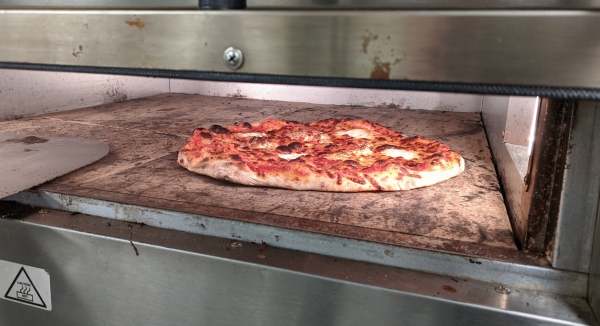 Back Door Pizzas are fully cooked in five to six minutes in a dual-deck oven. Credit: Matt Skoufalos.

With their basic recipe locked down, Fuller and Lawler next began leveraging the strength of their farm-to-table kitchen to round out the menu with some gourmet options.

The Back Door Pizza sausage bar pie is topped with house-made fennel sausage and chili jam for a hot-and-sweet combination.

“Mr. McKale” is topped with a kale pesto, garlic, parmesan, almonds, and olive oil, and the “CSF,” or “Current Staff Favorite”, has hot peppers, hoagie onions, fresh mozzarella, and garlic crema. Of course, the most popular orders are still plain and pepperoni pies, Fuller said.

“We’re always looking for what’s unique,” he said. “At the end of the day, though, we want to make a pizza that’s really tasty and really approachable.

“We all were very familiar with the big pizzas in town, whether it’s Angelo’s, or Beddia, or Taconelli’s, but I also feel like, in the moment, when you have a great slice, it’s the best slice ever,” Fuller said.

Back Door Pizza has been rolling since late August, with neighbors, friends, and family among its early adopters. As word got around, orders jumped up quickly thereafter. Lawler is grateful for the growth of the business, but also thinks the concept wouldn’t necessarily have taken off under normal circumstances. 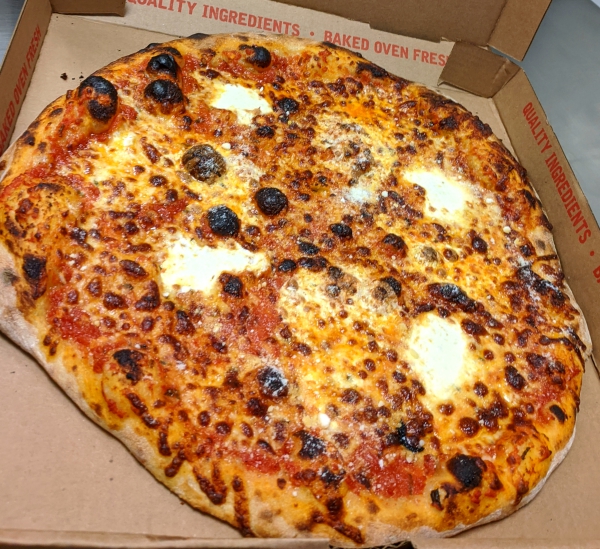 A plain pizza from Back Door Pizza, fresh, hot and in the box. Credit: Matt Skoufalos.

“I think people are excited to support people they like and know,” he said.

“I also think that if we had done pizzas on our regular menu, it wouldn’t have been as successful.”

The D.I.Y. aesthetic of the back-alley pizza shop has a lot to do with its speakeasy flair.

Order your pie, and you’ll get a text alert instructing you to roll around to the rear of the strip mall location to pick it up.

A stencil spray-painted on a plywood sign directs you to a service door flanked by red lanterns, where you can give a not-so-secret knock to scoop up your pre-paid pie.

Even the logo is repurposed, the Farm and Fisherman trout and carrot having been tweaked into a hungry fish sizing up a slice of pizza.

The necessity of the moment drove a lot of the innovation that followed, leading the chefs to discover “what can we start with the least amount of capital, Lawler said.

“It’s helped us also grow this at our own pace,” Fuller agreed. “It’s only been a few weeks, but we settled on what we really like, and as we get more consistent business, we’re learning more about the product.”

Back Door Pizza from Farm and Fisherman is available for pick-up Wednesday through Saturday, 4 to 8 p.m., and from 2:30 to 7:30 Sunday. Orders may be placed through the business website, backdoor-pizza.com.