Trending
You are at:Home»Government»Bancroft Sale Raises Redevelopment Questions in Haddonfield

The question of what to do with the 19-acre property has taken a decade to answer, and any resolution will have a far-reaching impact throughout the borough. 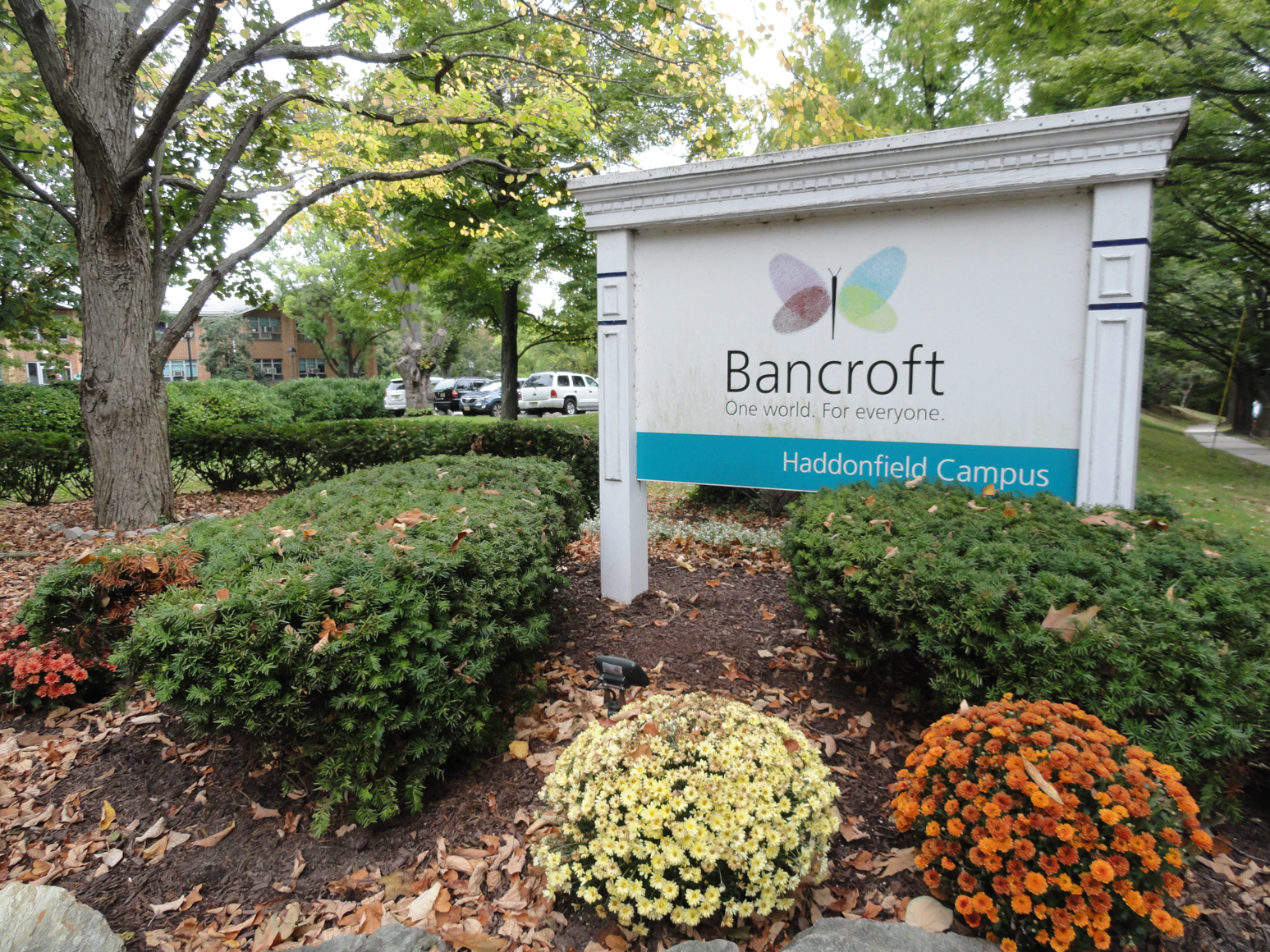 The 18.7-acre Bancroft Haddonfield campus is up for sale. Credit: Matt Skoufalos.

Earlier this month, as the residents of Haddonfield waged an ongoing debate on the impact of subdividing a pair of residential tracts, one of the largest parcels of land in town quietly came back on the real estate market.

Now the question of what to do with the Bancroft campus, an 18.7-acre property along the Haddonfield-Cherry Hill border, has emerged as the foremost real estate concern in the borough.

The health services agency announced October 7 that it had purchased 80 acres in Mount Laurel and would relocate its Haddonfield operations there within the next three to four years.

With that, a site that has been the focus of multiple redevelopment proposals in the past decade is once again back in play.

Although Haddonfield Mayor Jeffrey Kasko is “not sure what’ll actually end up happening” with the land, he foresees a combination of interests converging on the grounds.

The campus is currently zoned for single-family home development, Kasko said, adding, “That’s probably not a good use of it at this time.

Kasko believes a more likely scenario would involve developing a mixed-use plan combining public use of the land—including by the local school district—“some type of limited development,” and possibly “age-restricted, 55-and-up townhomes.”

Establishing a senior community “wouldn’t burn the schools, and would give the seniors someplace to move to,” the mayor said. Kasko believes there is a contingent of aging Haddonfield residents who “live in big houses but want to stay in town” upon their retirement.

“It would be a win-win for everybody,” he said. 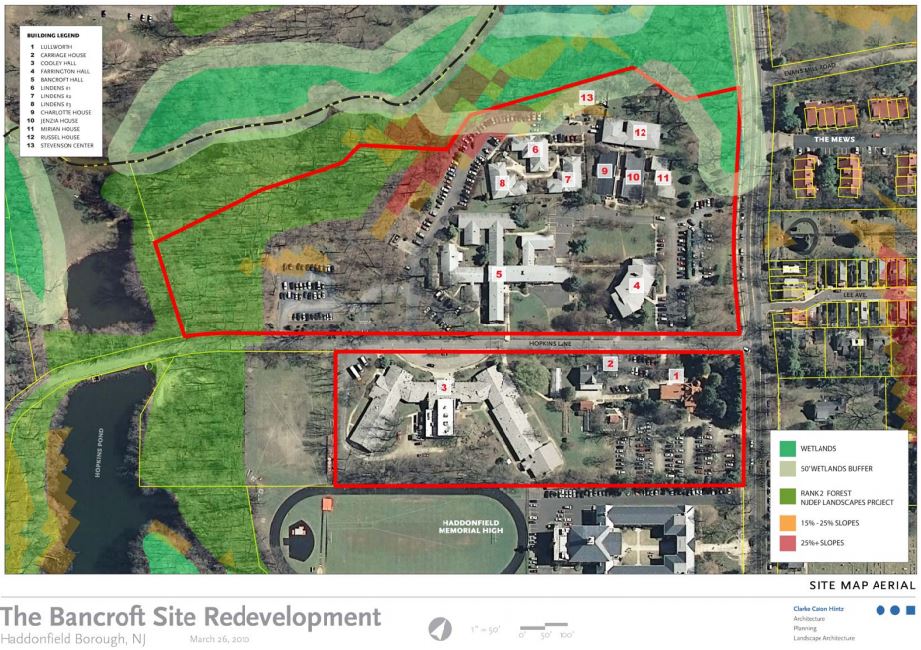 Kasko is not holding out hope, however, for some relief from the Camden County government in the form of open-space preservation.

Prior land surveys have deemed a portion of the Bancroft parcel undevelopable due to some steep slopes and adjacency to wetlands (Hopkins Pond), which would make it a candidate for such a designation.

The state appraised some 13 acres of the site at $7.8 million, the Philadelphia Inquirer reports—far less than the $12.5 million price tag associated with the bond referendum Haddonfield residents voted down in 2013—but Camden County only has some $3.4 million in its open-space trust funds available for such a purchase.

“The county purchase doesn’t look like it’s going to happen,” Kasko said. “We can’t just sit around and wait.

“I would love for [the land]to be all public use, but the cost of that is immense,” he said. “There’s only so much grant money and so much open-space trust fund money. The idea that it’s all going to be park and open space is probably not realistic.” 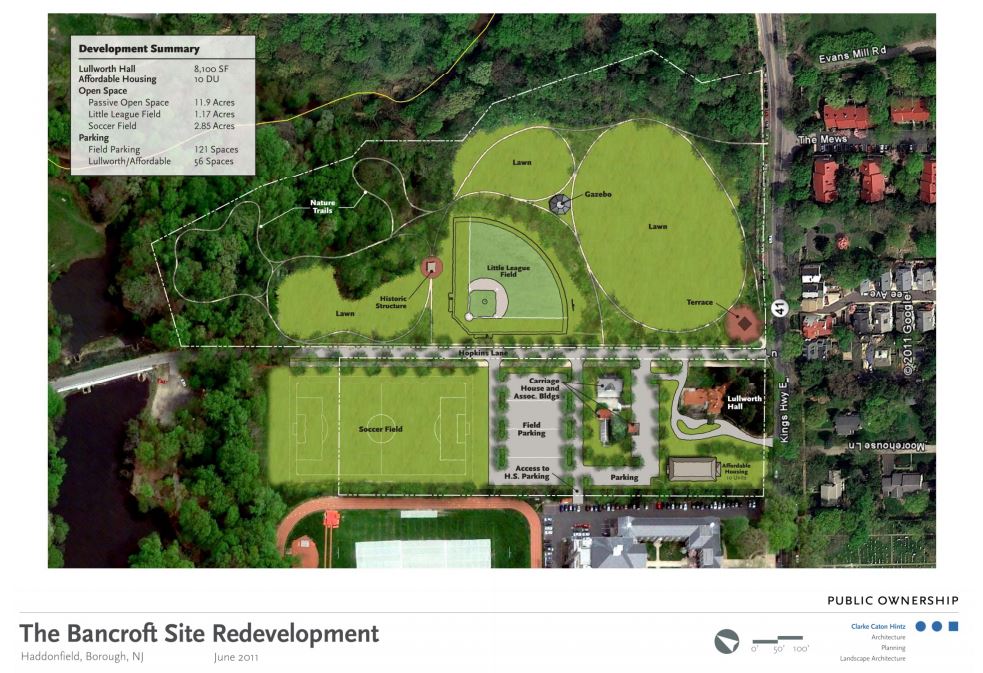 Building any new residential properties in Haddonfield would also trigger clauses of its COAH affordable housing plan, which has an impact beyond the campus site.

According to its amended third-round plan, which Haddonfield adopted in December 2008, 10 affordable units would be built on the Bancroft site, with the proceeds of the sale funding the construction of 10 additional units elsewhere in the borough; specifically, the 1.5-acre parking lot behind the municipal building.

Those numbers, however, were calculated based on the proposed construction of 80 market-rate units at the Bancroft site, a figure that would be amended based upon any mixed-use zoning designation.

“Some of the [hypothetical] townhomes could be affordable units for low- and moderate-income [residents],” Kasko said, “but we’re also going to have to move on our other possible sites for affordable housing.”

The other areas previously designated for affordable housing within the borough include: the 7.7-acre parking lots at the PATCO Speedline station, the 2.3-acre site occupied by the ACME supermarket on Ellis Street, and the 1.3-acre PNC Bank property between Hawthorne and Merion Avenues.

From a civic perspective, Kasko also recognized that the departure of Bancroft from Haddonfield is “a little bit sad and a little disappointing,” as the 131-year-old institution has cared for generations of developmentally disabled persons, and employs more than 1,000 people within Camden County.

Ultimately, Kasko deemed the sale a “necessary” move that “opens up the next chapter of change.” 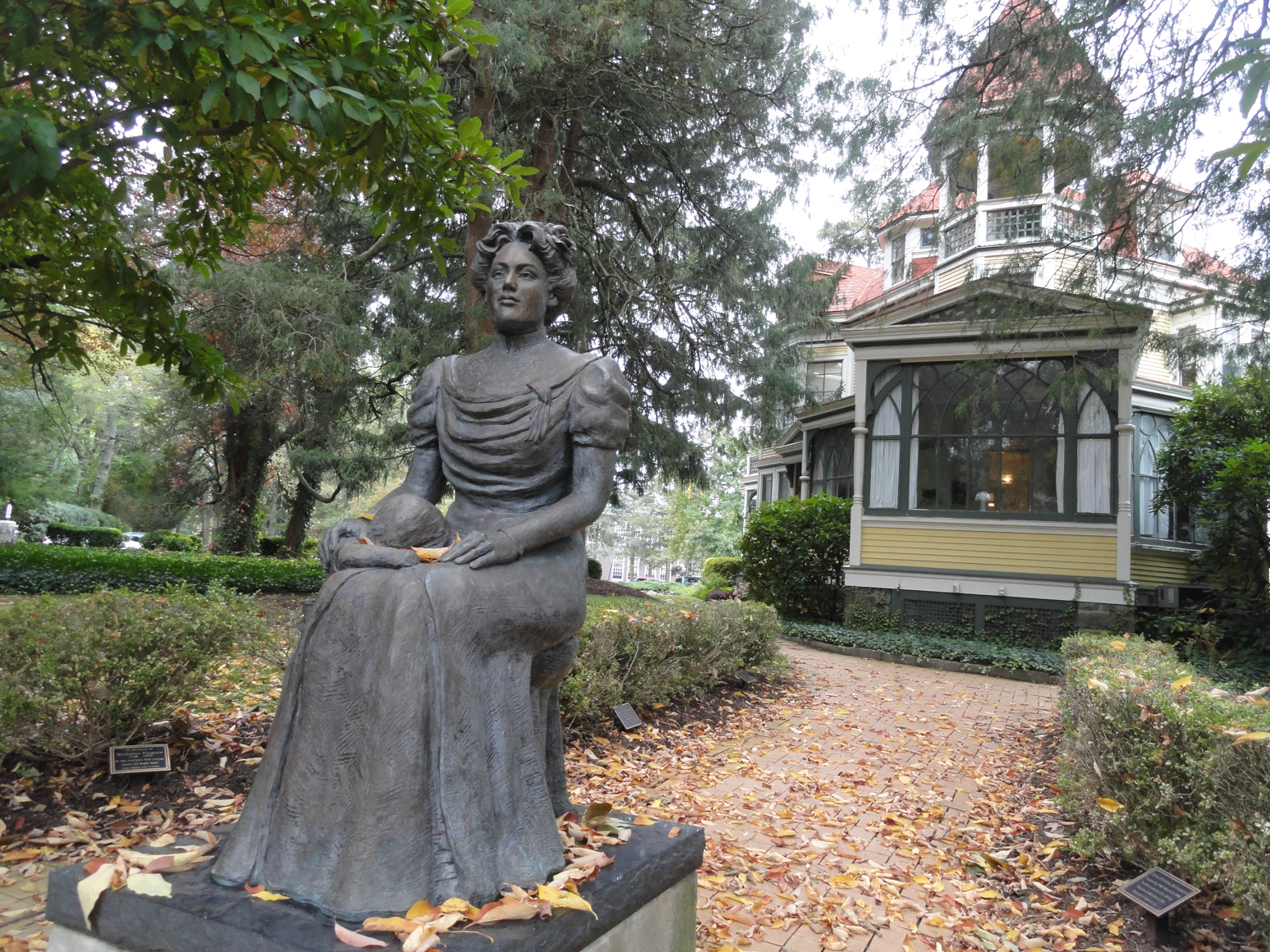 Although the Haddonfield school district wasn’t able to muster the political will to purchase the Bancroft property at $12.5 million, Superintendent Richard Perry said he “still believe[s]in the vision of what we put forth in the referendum,” and suspects that an appetite exists for giving at least some portion of the grounds to the public school system.

In a town of some 4,400 households, 5,000-plus votes were cast on the question, which failed by only a 251-vote deficit, Perry pointed out. Of those, 218 “no’s” originated in the Radnor voting district, according to Patch.com.

Perry chalked up the groundswell to “misinformation” about fears of developers subsequently acquiring the Radnor Avenue baseball fields after the Bancroft sale went through, and building high-density housing there.

“I don’t think [the outcome of the vote]was an affirmation that the town rejected [the question],” Perry said. “Over half the town wanted it. I still believe in it.”

Although Perry said his first preference is to preserve the Bancroft parcel as open space, at the least, he would like the district to acquire six acres of the property adjacent to Haddonfield Memorial High School and bank the land for future use by the district “as a defensive move” to keep “another development organization from building right up, 20 feet from the high school.

“If it went to some kind of age-restricted housing development, I’d support that too,” Perry said, but added that any redevelopment conversation could re-open “months of debates and discussions,” which to him “just seems like going around in a circle.

“I think the compromise now is to find a way to get that open-space money for the far side [of the property], and then get green acres money for the near side,” the superintendent said.

Perry said the issue isn’t just about preserving open space in the 2.8-square-mile borough; rather, he said, the Bancroft site is “a place where we could utilize the millions” that Haddonfield taxpayers put into the county coffers.

“We’re landlocked as a community and a school district,” Perry said. “Our performances are extremely high. As we do get very little state aid and other support financially, this is a way that local, county, and state government can support the Haddonfield school district.”

Perry pointed out that Haddonfield has the smallest high school campus in the Colonial Conference, which poses logistical problems for special events. A recent home football game against West Deptford drew some 3,000 attendees, he said, and the only place for overflow parking was the Bancroft campus.

Even if the district doesn’t presently have a defined purpose for the land, Perry said he believes it needs the flexibility that the real estate affords future generations.

“We got the high school land for the stadium from a gentleman that donated it in the 1900’s,” Perry said. “Radnor Field: again, donated. Scout Field: purchased from the railroad by a previous administration.

“Those boards had the foresight to acquire those areas,” he said. “It’s our turn to do what’s right for the school district.”

Without future room for growth, Perry said, it’s possible, however remotely, that Haddonfield schools could mirror the fate of the Merchantville public school district, which he said had a reputation for excellence in the 1950s and no longer exists.

“I grew up around this area, and Haddonfield school district to me is more than just a job,” the superintendent said. “It’s where I’ve lived, it’s where my family has lived, and I care about what’s going to happen 40 years from now, even if I’m not going to see it.”