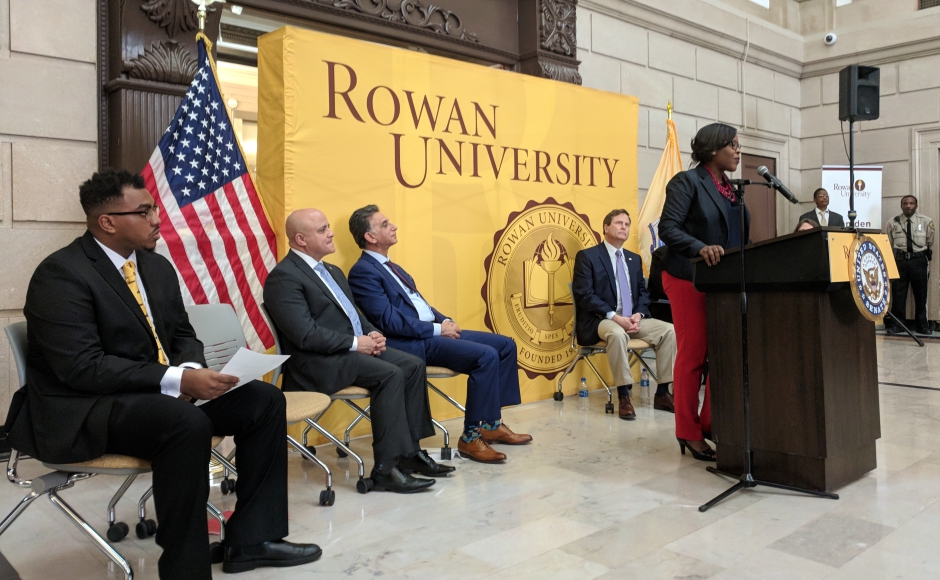 Monika Williams Shealey, Dean of the Rowan College of Education, speaks at an event announcing the Strive Act in Camden. Credit: Matt Skoufalos.

Two New Jersey Congressional representatives visited Camden Thursday to boost a U.S. Senate bill aimed at improving conditions for educators nationwide, all while stressing the significance of the November midterm elections in passing it.

“This is a question about what do we prioritize as a society,” Booker said. “I don’t understand how you think a nation is going to lead in the 21st century investing in tanks, bombs, and ships, and not investing in education and early childhood.

“It is time for our nation to brag about the right things,” he said.

The bill, which Booker introduced in legislative session this February, is proposed as an antidote to nationwide teacher shortages in communities of need, to the burdensome cost of education that doesn’t square with professional salaries and the cost of living, and to the out-of-pocket expenditures that teachers incur in the classroom.

Its language cites the lower salaries and poorer working conditions typical for teachers in low-income communities, the shortfall between TEACH grant subsidies and the costs of four-year colleges, and the disparity between teachers’ earning potential and those of their peers with comparable degrees.

“These compounding factors can disincentivize prospective teachers from entering the profession,” the bill notes.

The Strive Act would

Rowan University President Ali Houshmand said that as Americans lose “that connectivity between schools [and]  early childhood education,” they aren’t positioned to lift themselves out of poverty. 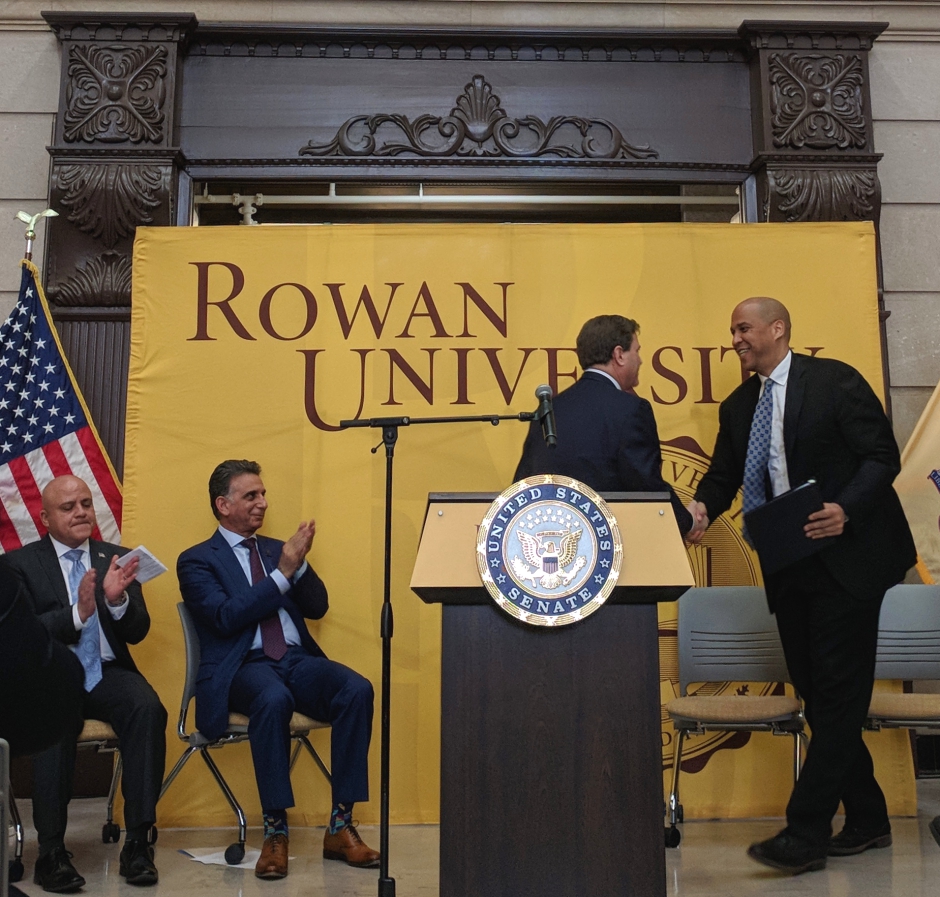 “Through Title I and Title II, you can hand the support that kids need,” Houshmand said.

“They’re committed to come to a city, and stay here, and live here, and teach here.”

“If you want to teach in a Title I community, you should have your loans forgiven,” Booker said.

He spoke specifically to the challenges of elevating local talent in an economically distressed community like Camden.

“We as a country have to cultivate and harvest that genius, beginning with people.

“This bill reinforces what we as a nation believe in: education, and those who drive it, teachers,” Norcross said.

(Norcross, the incumbent representative from New Jersey’s first legislative district, announced his re-election bid in Collingswood this month. Booker said the midterm election was the most “consequential” of his lifetime.) 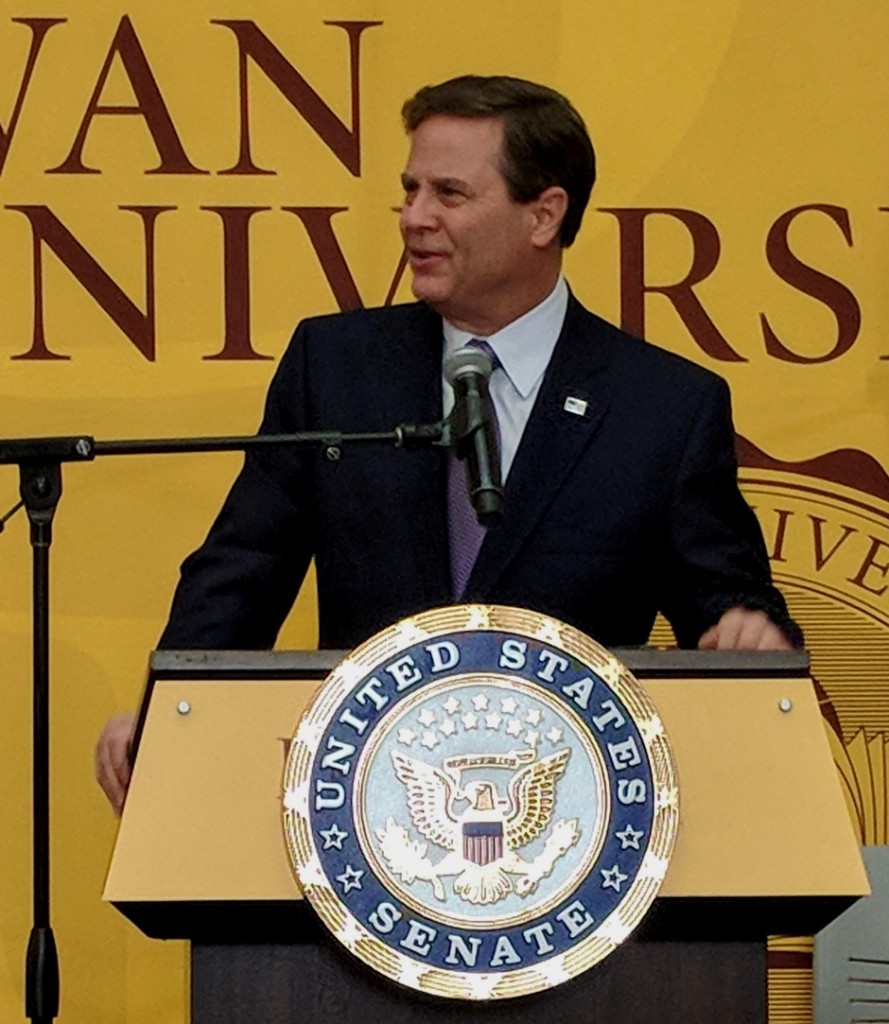 Citing educators’ labor actions from West Virginia to Arizona, Sean Hadley, Associate Director of Government Relations for the New Jersey Education Association, said the Strive Act is an antidote to “the ideology that you have to cut in order to achieve.”

Hadley said teachers are asked to make “the impossible choice” in a climate where budgeting priorities are “simply trying to maintain against cuts as we try to move our country forward.”

Asked whether the Strive Act could help to alleviate some of the high costs associated with New Jersey school taxes, Booker suggested that the bill could be a give-back for “this distinction New Jersey has of sending more of its tax dollars to Washington and getting less of a percentage back.

“New Jersey is a high-tax state, and there’s not a New Jerseyan here that doesn’t understand and doesn’t feel that,” Booker said.

“Town governments, mayors, county leaders have difficult challenges ahead of them,” he said. “Our job at every level is to bring more resources back from the federal government.”