Trending
You are at:Home»Business»Building Blocks of a Viable Downtown on the Camden Waterfront

‘Fundamentally, this is really about the success of our whole region,’ says Liberty Property Trust Senior VP John Gattuso. The project aims to add thousands of jobs by creating a landmark office hub. 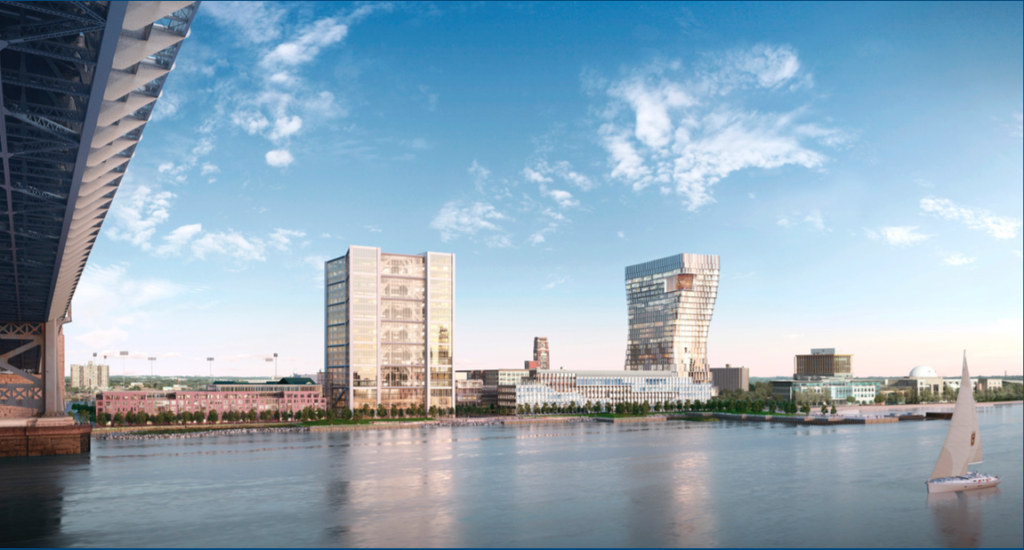 Last September, the city of Camden announced plans for a billion-dollar, mixed-use development designed to infuse life into the discrete elements of some 16 acres of Delaware River waterfront property.

As the project moves forward through various stages of approval to a planned groundbreaking, it bears the weight of expectations as lofty as its price tag.

At the same time, Gattuso cautioned that for all its upside, the project has a ceiling. It isn’t a cure-all for the decades of urban decay that have blighted the city, and Liberty doesn’t have endless reserves upon which to draw to remedy those.

At its best, however, the redevelopment initiative can lay the foundation for Camden as a cutting-edge business destination by drawing thousands of jobs to the region, integrating tightly with multi-modal transit options, and establishing a viable residential real estate market upon which to grow the strength of future developments.

“We’re not perfect, and I’m sure that there’ll be something that, if we had a chance to do [over], we’d do it better,” Gattuso said. “[But] you can’t have a successful downtown if the neighborhoods are not fully thriving, or at least holding their own.

“What we’re trying to do is begin to build a context for a viable waterfront neighborhood; the larger vision is part of an extended viable downtown,” he said.

“We’re looking at this as an opportunity to provide very meaningful building blocks.” Moving towards an 18-hour cycle of activity

At its core, the plan situates four office buildings on 16.5 acres of waterfront real estate, about 15 percent of which is dedicated to open space.

Liberty is courting corporate clients to headquarter in new-construction office buildings; tenants who will bring with them an estimated 7,000 jobs to drive greater residential demand upon which a neighborhood can be built. The allure of Stearn’s designs will be a key facet of that draw.

“If you think of office space as infrastructure, not every square-foot is created equal,” Gattuso said. “Where you want to be, not where you have to be, is fundamentally what this is about.”

A planned 130- to 150-room hotel is one of the critical anchor points of the project. It would be the only such facility in the city, and “a very important amenity” not only for the corporate entities Liberty is hunting, but also for Camden’s existing eds-and-meds infrastructure, which presently “really can’t house visitors,” Gattuso said.

Adding a hotel helps increase sustained activity in the area, as the waterfront pushes towards an 18-hour neighborhood environment, Gattuso said. Adding 179 rental units and 211 for-sale townhomes to support those planned 7,000 jobs will help build a residential market that can establish some comparable values for additional parcels of land to the south.

“We think that with some hard work and some good luck, we’ll create something that, historically, people will say it was a turning point for the city.”

“We’re not going to be able to create enough demand overnight that you’re going to get supermarkets and other things to service the downtown,” Gattuso said. “But what we can do is begin to build a market for residential and support The Victor Lofts. Now, all of a sudden, you might have 1,100 [or] 1,200 residents. You’re halfway toward getting to a point where you really can support a supermarket. Combined with some of the adjoining residential, you might be getting close.” 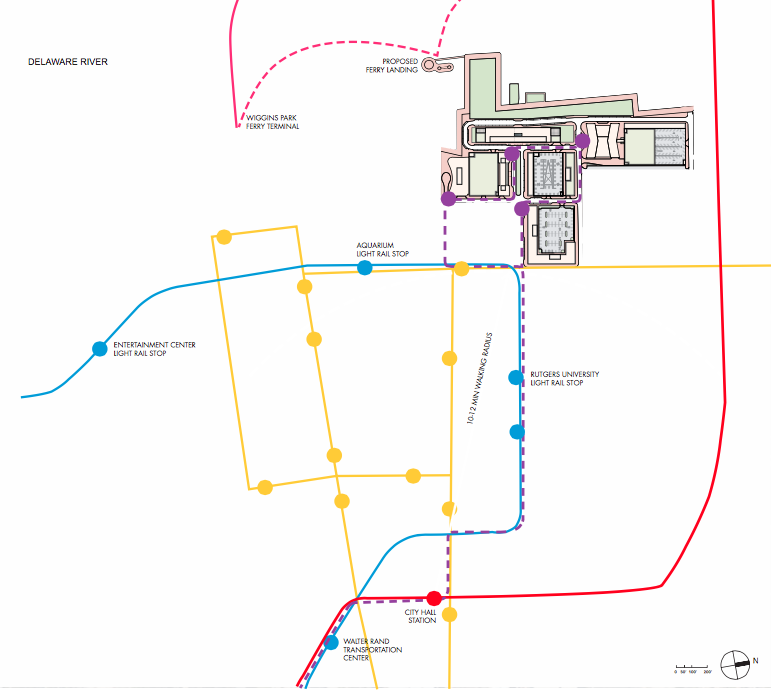 One of the last pieces of the puzzle will be the 20,000 to 25,000 square-feet of planned on-street retail, from small eateries to convenience stores and pharmacies, which Gattuso said will aid in “creating the beginnings of a real sense of place.”

To support “as much activation on the street as possible,” the site plan includes bike and pedestrian pathways, and establishes a dedicated shuttle bus service to and from the Walter Rand Transportation Center and City Hall PATCO stops.

It also means Liberty will be pumping dollars into resolving local stormwater and flooding issues, re-grading streets, and working to re-flow traffic in the area for the additional volume of visitors.

Many will come by car, and a trio of parking garages providing nearly 3,900 parking spaces has been scaled to cover 60 percent of vehicle commuters among those expected workers. The balance will arrive via public transportation, which Gattuso expects will trend toward a 50-50 split with car traffic over time.

In addition to offering transit flexibility, the project will contain LEED-certified buildings at every level, Gattuso said; he believes sustainable building design and neighborhood connectivity will set the tone for future developments. A proposed RiverLink ferry stop at the water’s edge will connect to landings at Wiggins Waterfront Park as well as in Philadelphia, demonstrating how greenspace comprises another critical component of the project. 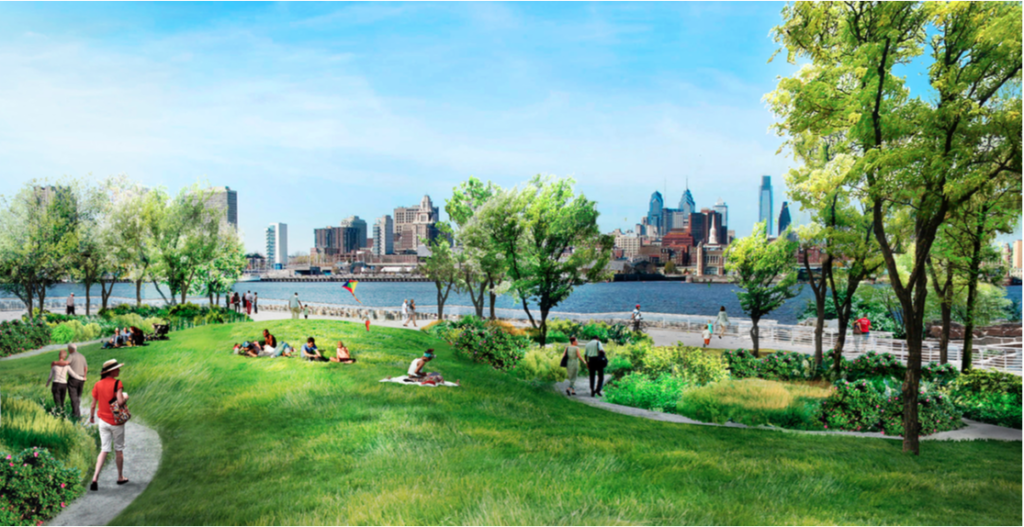 Multi-phase landscape architecture plans developed by Van Valkenburgh show the promise of a setting that Gattuso described as “the same kind of romantic, urban vista that you see in Brooklyn or San Francisco.”

The comparisons of that vision underscore the opportunity for Camden to make a larger statement about its renaissance by creating an energizing sense of place at the waterfront park.

“The bigness and the boldness and the thrill of being in a wonderfully exhilarating urban setting is one of the keys to capturing that kind of energy for cities again,” Gattuso said. “There’s a lot of complexity to this site. It has the weight of decades of good intentions on the part of many people, and it’s not easy. It may be the most challenging site we’ve ever been involved with.

“We think that with some hard work and some good luck, we’ll create something that we think will be sustainable, and historically, people will say it was a turning point for the city,” he said.

“To the extent that we can recreate this sense of concentrated activity in the core, it is going to make our region a more viable alternative for people and business to consider locating.” 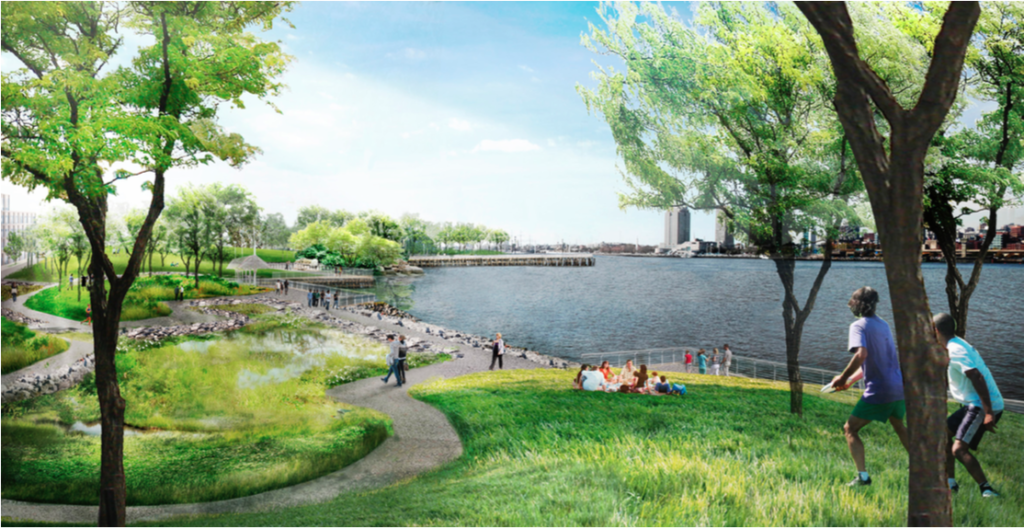 To make sure that current residents of Camden reap the benefits of that turnaround, Liberty is finalizing drafts of community benefits agreements that Gattuso said will maximize the opportunity for local businesses to participate in the building of the site in any way “from catering to bricks and mortar.”

Liberty will provide internship opportunities for Camden students in its own offices as well as “encouraging the companies that occupy these buildings to consider Camden residents for the jobs that become available,” he said.

“We’re not going to be able to solve every issue or provide every opportunity we wish we could, but these are things we think are important to do,” Gattuso said.

The billion-dollar project is incentivized by the New Jersey Economic Development Authority, which provides tax credits that help make the project financially viable through its Grow NJ assistance program. Although the incentives lay the groundwork for corporate investment, they are not themselves enough to attract the type of interest that will sustain the project. Tax credits can “confirm a direction that a company was already headed,” but “in the absence of a viable setting on the waterfront, that’s not happening,” Gattuso said. 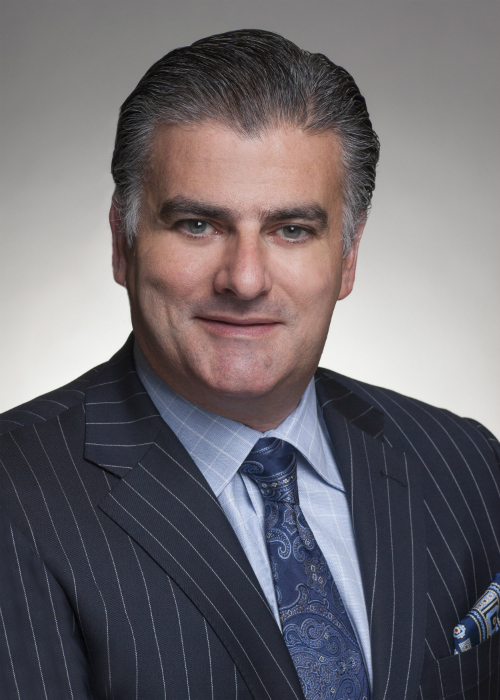 “If I want to recruit from Wharton or Columbia and I say, ‘You can work in downtown Philadelphia or a job in a suburban location at the same salary,’ nine of 10 times or more, that person won’t take that job offer if it’s in the suburbs.”

To critics who suggest that Camden tax credits only poach South Jersey businesses from other nearby communities and don’t create a net gain in the local economy, Gattuso counters that Camden might be saving jobs that would otherwise flee the region entirely.

“Fundamentally, this is really about the success of our whole region,” Gattuso said.

“To the extent we can rebuild and recreate this sense of concentrated activity in the core, it is going to make our region a more viable alternative for people and business to consider locating.

“Ultimately, it will create more wealth for the region,” he said. “It will create an opportunity for our kids to stay here and get gainful employment here. You see this in the revitalization of downtown Philadelphia, the Navy Yard; this larger expanded core for greater Philadelphia that is increasingly becoming a significant engine that drives growth for the region.

“I think it’s really about companies that are indigenous trying to figure out and find the right environment that will allow them in South Jersey to be competitive on what is increasingly a global scale, if not a national scale.”