After a Midwestern couple allegedly tore apart their family restaurant in 2022, brothers Jose and Ever Merino are still reeling from the impact of the burglary and a string of bad news that accompanied it. 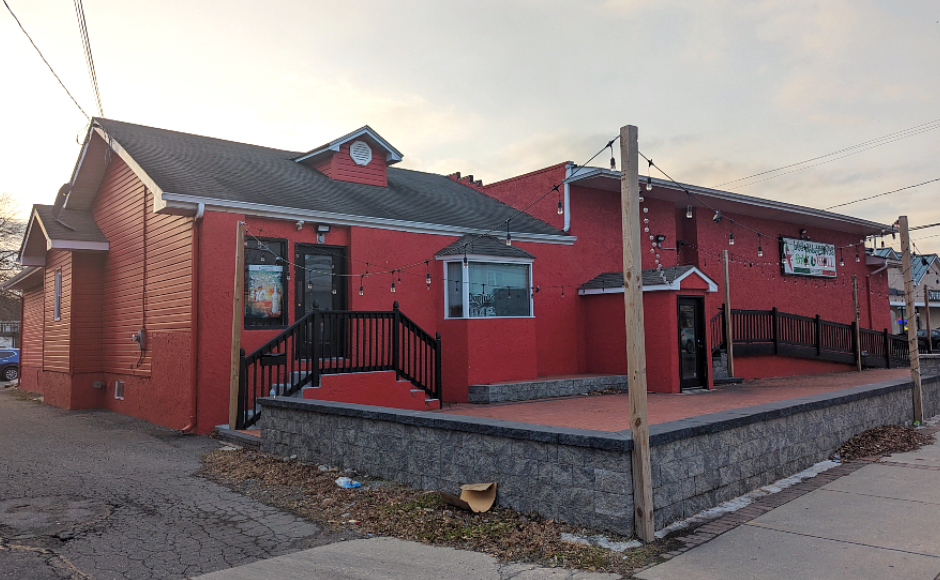 For the past eight years, Los Jalapenos Bar and Grill has been well-received, whether it was located in Haddonfield, Haddon Township, or Gloucester City.

But in 2019, when brothers Jose and Ever Merino bought the former Vitarelli’s catering hall in Oaklyn, and invested heavily in its renovation, their restaurant finally hit its stride.

The homestyle Mexican cuisine and extensive tequila bar seemed a perfect fit for a borough that had once courted La Esperanza of Lindenwold to open a second location there.

“We are in a nice neighborhood, and people really support us a lot,” Jose Merino said.

The Merinos split duties at the restaurant; Ever opens, and Jose closes up at night. But on the morning of September 22, 2022, after taking his daughter to school, Jose got a call from his brother that someone had broken into their business.

“I didn’t even believe it,” Jose Merino said. “I said, ‘I’m coming in now. Don’t touch anything; just get out of the place.’ I called the cops, and they came right away.

“For the eight years we’ve been in business, I’ve never had an experience like that,” he said. “I feel safe in the place.”

The brothers spent half the day in the parking lot of the business they had spent the better part of three years establishing while detectives processed the scene. The extent of the damage inside the restaurant was so complete that local police called in back-up from the Camden County Prosecutor’s Office (CCPO).

Oaklyn Police Sgt. Colby Bryszewski described the crime as “definitely the biggest burglary and the amount of damage incurred from a burglary” that he’s seen in 10 years with the department.

“They truly ransacked the place,” Bryszewski said. “For [the CCPO] to come out for us is a statement in and of itself of the severity [of the incident].” 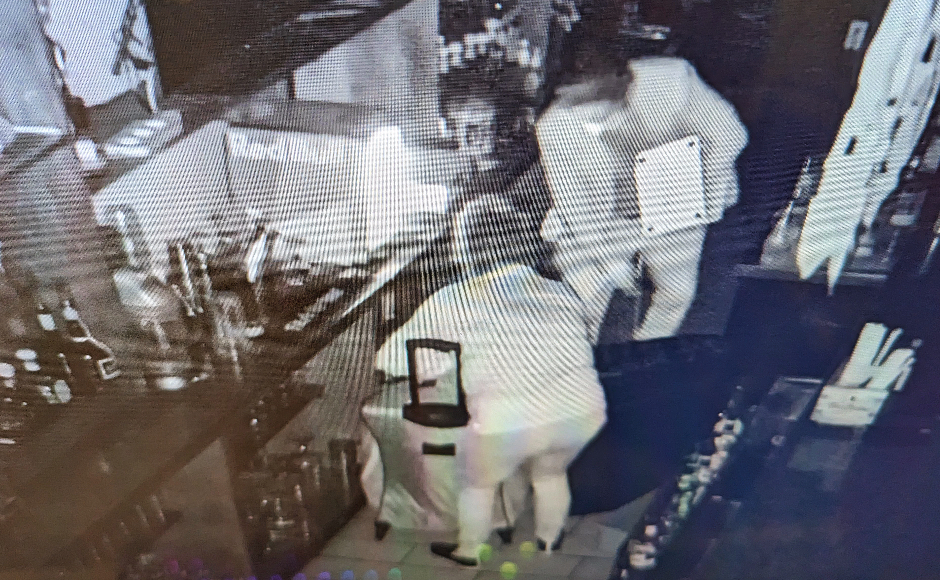 Surveillance footage revealed that the burglars — alleged to be Theron Brusch, 47, and Tori Stevens, 29, both of Pleasant Prairie, Wisconsin — had broken into the restaurant by 10:50 p.m.; less than an hour after closing.

After reportedly trying to force entry in the rear of the property, they allegedly drilled the lock to the front door, and walked inside.

Once within the restaurant, the suspects apparently spent some five or six hours tossing the place, starting with the bar, Jose Merino said.

Security footage shows a woman loading bottle after bottle into a rollaway suitcase, while a man in a light-colored suit and two-tone dress shoes cuts cables to a point-of-sale (POS) system. Both are wearing facemasks.

After the suitcase was filled with alcohol, footage shows the couple stuffing the POS computer into an empty garbage can, and then going back to retrieve cold bottles from the refrigerator at the bar.

“They took the empty garbage cans and started filling them with the POS systems,” Jose Merino said. “I opened up the next day with no garbage cans.”

In total, Jose Merino said the burglars made off with four separate Clover POS systems and the computers attached to them, valued at $5,000 apiece, plus cash drawers containing money for the day crew.

After packing up what they wanted from the bar — a theft that included blenders, AV equipment, and even the kitchen crew’s speakers — the suspects allegedly ransacked his office next.

“All my papers were in piles in the middle of the floor,” Jose Merino said. “They searched through everything. They took my safe out on a wheeled chair.”

Particularly disappointing was the loss of his tequila collection, some 40 bottles that Jose Merino valued at more than $3,000. But the burglars also made off with his toolbox, the business checkbook, and envelopes containing some staff wages (the break-in occurred on the eve of a payday). 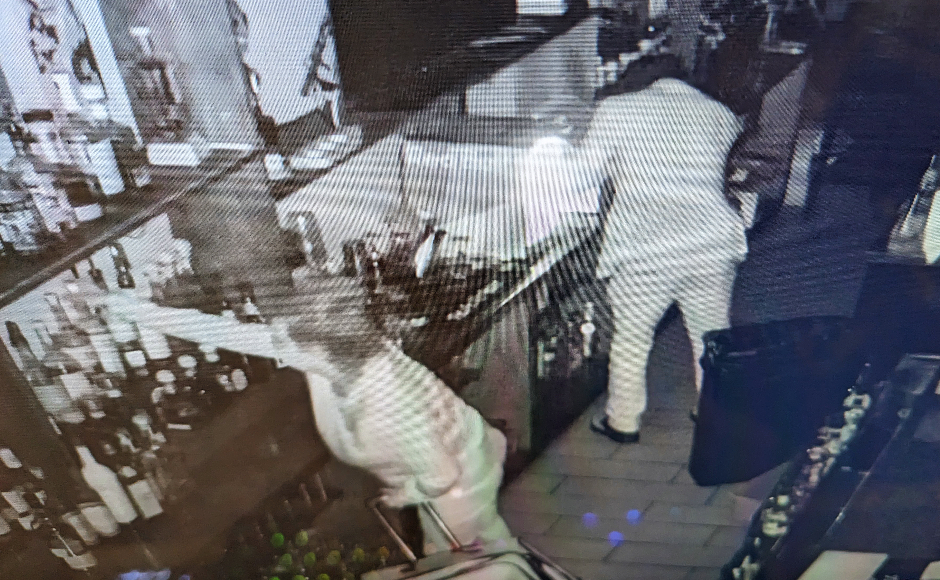 (The next day, the Merinos got a call from a bank in Philadelphia that someone had tried to cash a fraudulent check from his business, an incident that Bryszewski said did not involve the restaurant burglary suspects.)

Before leaving the restaurant, Jose Merino alleges that the suspects attempted to break into an onsite ATM, as well as emptying a refrigerator of premade food, which they reportedly ate throughout the restaurant, while searching its basement.

Investigators told him that everything was loaded out into a car parked in the rear of the property.

Beyond the damage and the hours that detectives spent processing the scene at the restaurant, the Merinos lost a day of in-house business, plus a catering order that they couldn’t fulfill. When the POS provider told them it would be two more weeks before replacement units could be delivered, the brothers purchased new systems from another vendor rather than waiting.

Then there were days spent changing over banking information, retrieving copies of business documents from the borough government; even explaining to the New Jersey Division of Alcoholic Beverage Control (ABC) why they didn’t have their liquor license onsite during an unannounced visit.

All along, Jose Merino said that people tried to console him with the promise that his insurance provider would cover his losses. Unfortunately, the only reimbursement he was offered was less than $300 to replace the drilled door lock.

“I thought I was covered,” he said. “The insurance told us that nothing they robbed was covered because we didn’t have an alarm system.”

In addition, the insurance company notified the Merinos that the business had exceeded its initial coverage estimate, and billed them for another $22,000 in unpaid premiums. And shortly thereafter, they got a letter from Joe Hand Promotions, the exclusive distributor of Ultimate Fighting Championship bouts, seeking $30,000 for unauthorized commercial exhibition of a pay-per-view match.

All told, the break-in, replacement equipment, insurance fiasco, and pay-per-view settlement amounted to about $100,000 in losses for the business. The brothers contemplated closing down for good.

“I was ready to give up,” Jose Merino said. “I called a real estate agent; I wanted to sell the place.

Instead, the Merinos decided to sell their Gloucester City location, which hadn’t maintained the business they’d hoped (and which also sustained a burglary). They are presently putting their entire focus into salvaging the Oaklyn restaurant, and with the help of their customers in the community, things are looking up. But it will take time to recover.

“It’s getting better,” Jose Merino said. “After people found out, they showed their support. If it wasn’t for their support, I would probably be another empty place.

“We’re a small business, living the American dream,” he said. “Everything that we made is from scratch. We started from nothing; we can start a second time from nothing.”