The program is aimed at increasing transportation access throughout the city. 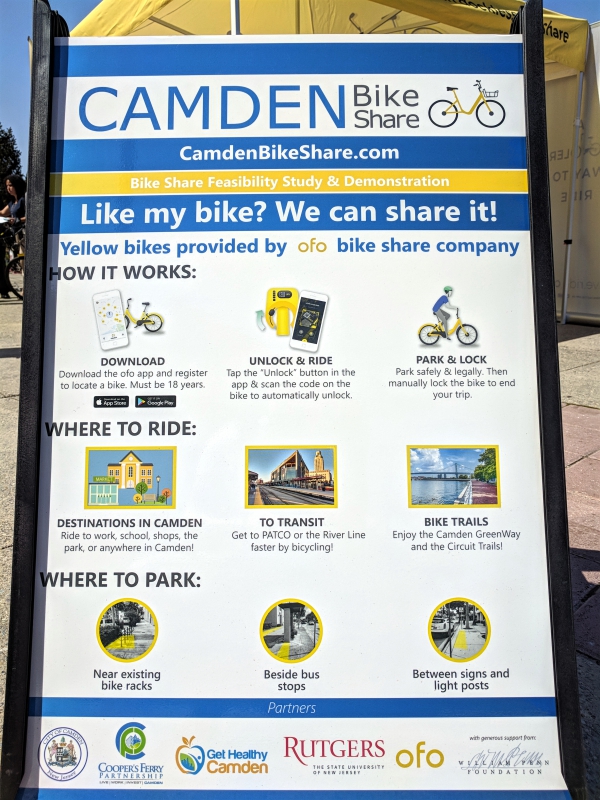 A new project intended to provide Camden residents, workers, and visitors with low-cost, city-wide travel will put 500 shareable bikes on the city streets this summer.

Organized in coordination with Cooper’s Ferry Partnership and the Alan S. Voohees Transportation Center at Rutgers University, the Camden Bike Share is intended as an inexpensive, last-mile mode of transport.

Bikes are supplied by the Beijing, China-based Ofo, which provides a “dockless” sharing system whereby bikes can be locked without being returned to a specific location.

Riders find a bike via a mobile app; the bikes contain a battery-powered GPS that allows them to be tracked.

Safety features include a kinetic-powered front light and solar-powered rear light; for convenience, the bikes include a front-mounted basket and a Wordlock combination lock.

The project will run from May to September, deploying bikes across Camden City from residential neighborhoods to ground transit hubs to citywide areas of interest.

“We thought that this was the right kind of demonstration study,” said Cooper’s Ferry Partnership CEO Kris Kolluri.

The bikes cost $1 an hour to ride, but Cooper’s Ferry is subsidizing some of the cost for low-income users, who can get a three-month unlimited access code for $15. Funding for the bike share was provided as part of a larger, $1.8-million grant from the William Penn Foundation, Kolluri said. 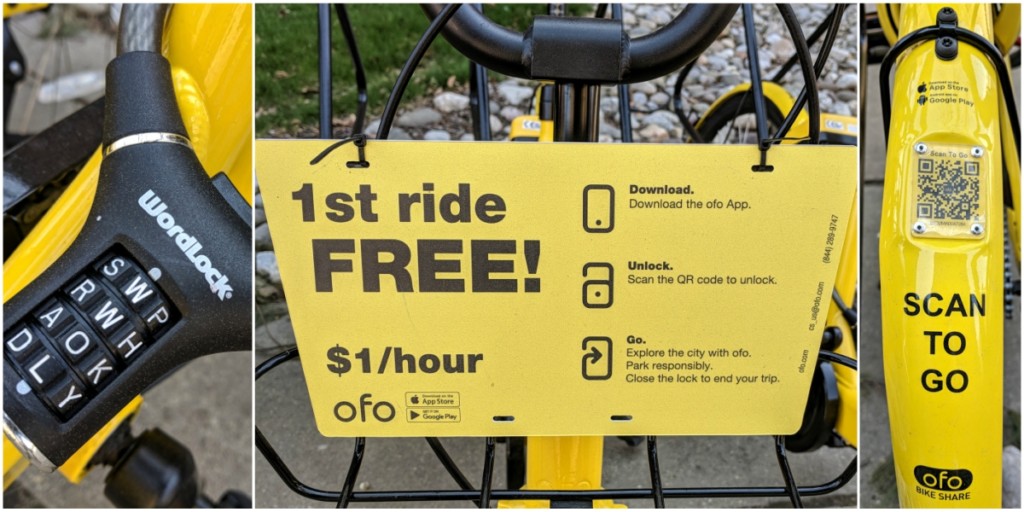 Ofo bikes contain a wordlock, an onboard GPS, and coordinate with a mobile app. Credit: Matt Skoufalos.

Levine sees similarities between the ridership needs of Camden and those of its other markets like Washington D.C., or South Dallas.

“Camden is unique in a lot of things,” he said.

“Our partners will ensure that we’re equitably serving the marketplace, and we have conditions for success. We’re going to be looking for feedback from the community.”

Those conditions for success haven’t yet been determined precisely, however, said Charles Brown, senior researcher at the Alan Voorhees Transportation Center at Rutgers University, who is part of an advisory committee formed around the pilot project.

“What we care most about is that everyone in Camden has access to a bicycle,” Brown said. “It increases mobility and opportunities to be healthy.” 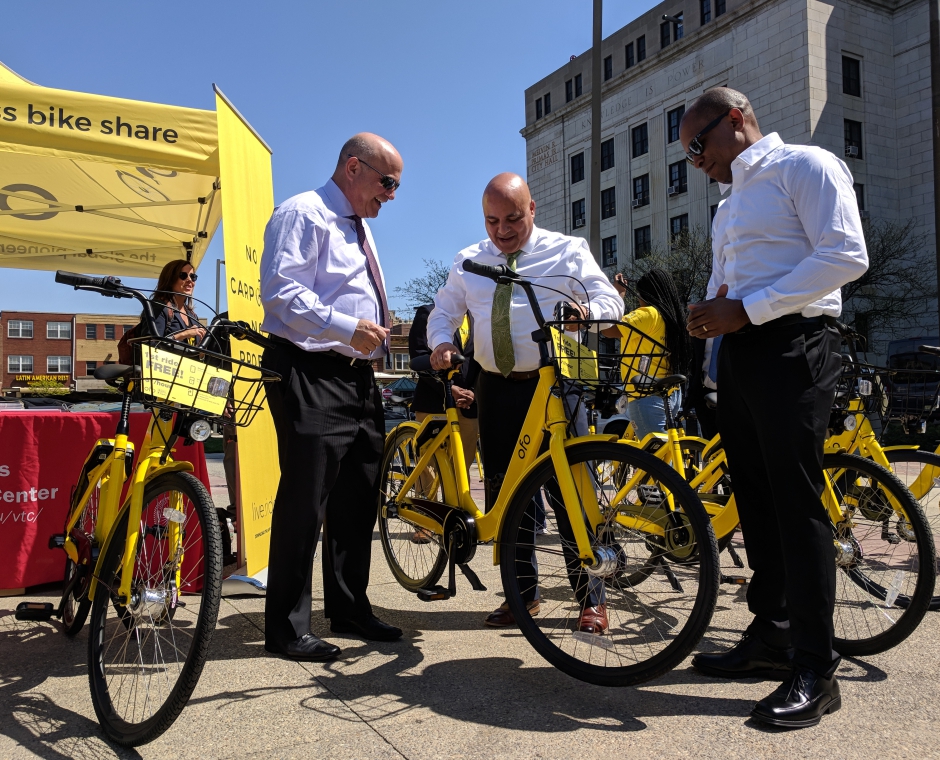 Indicators may include how successful the residents think it is, and whether it’s equitable.

Riders need, at minimum, a prepaid credit or debit card and a mobile device to make use of the system, which can be barriers to entry in low-income neighborhoods.

Brown said project organizers are “working with Ofo to establish an equity system” for use of the bikes.

Camden County Freeholder Jeff Nash said the Camden Bike Share can also help support the volume of new residents and employees that he foresees the city will absorb, while encouraging people “to get out of their cars.”

“This is a critical component of revitalization,” Nash said.

The freeholder also said the bike share would encourage ridership of the Camden County cross-country trail, which is the spine of a greater network that takes bicyclists from the Ben Franklin Bridge all the way down to Winslow Township.

Putting a volume of bikes on the road is a key component of the plan, but there are ancillary concerns. For one, the county bike lanes aren’t fully developed; for another, Ofo doesn’t offer helmets with its rides, although Valeria Galarza of Cooper’s Ferry Partnership said the nonprofit does have a limited supply of helmets to distribute. 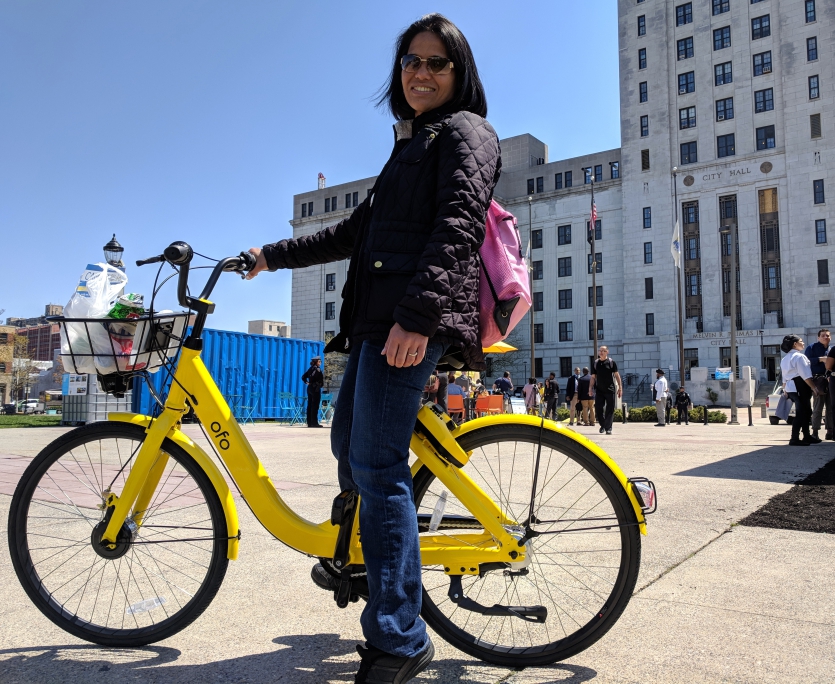 Camden City resident Grace Espiritu, who was wheeling around Roosevelt Plaza Park at the launch event, said the convenience of the bike share may help residents with their commutes as well as with exercise.

“I like that I can rent it and give it back; I don’t have to maintain it,” Espiritu said.

Her family has a car, and Espiritu rides the bus, but she said the Ofo bikes may be a lower-cost antidote to vehicle travel.

A one-zone bus ticket is $1.60, Espiritu said, but a bike has no limits other than the hourly ones.

“I think you could use it to go to work, and it could be cheaper than public transit,” she said.