In the second year of the program, four more rescue dogs trained by inmates at the county jail will find permanent homes with veterans in need of service animals. 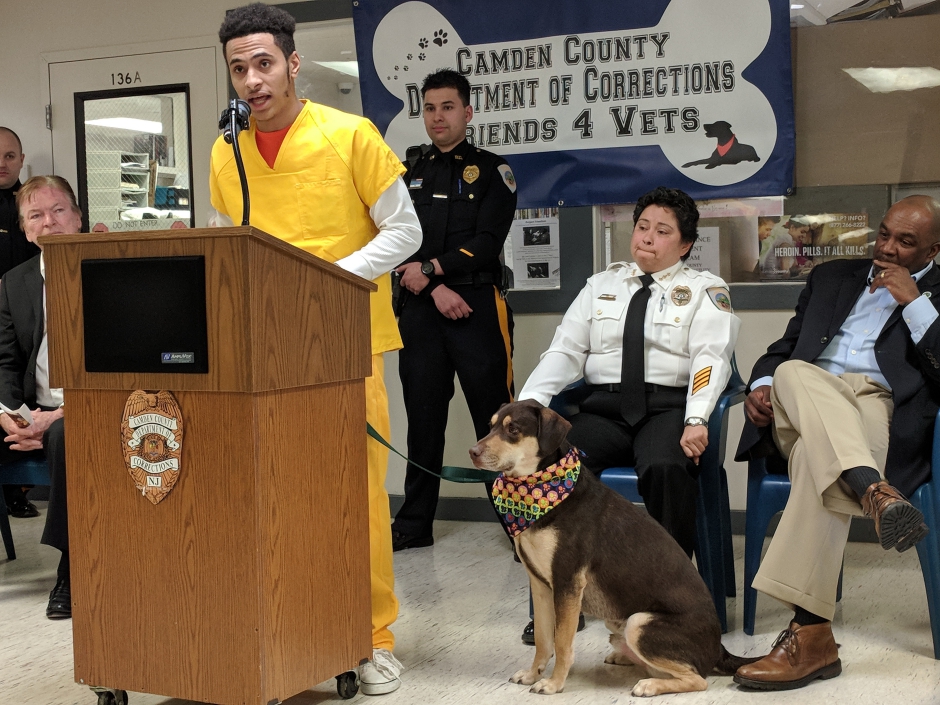 How much can a dog change your life?

It’s a question often asked and answered on a personal level, and not as much as a policy consideration.

By any measure, Friends 4 Vets, a program connecting shelter dogs with inmates who train them to be service animals for local veterans, has yielded an emotional windfall at a bargain price.

Camden County Freeholder John Young, liaison to both the county animal shelter and its Department of Corrections (DOC), said the arrangement is “a win-win-win for everybody, across the board.

“We’re cleaning up the animal shelter, which is great,” Young said. “The vets are getting a comfort, because they have this dog, which is unconditional love. These dogs are helping the inmates.” 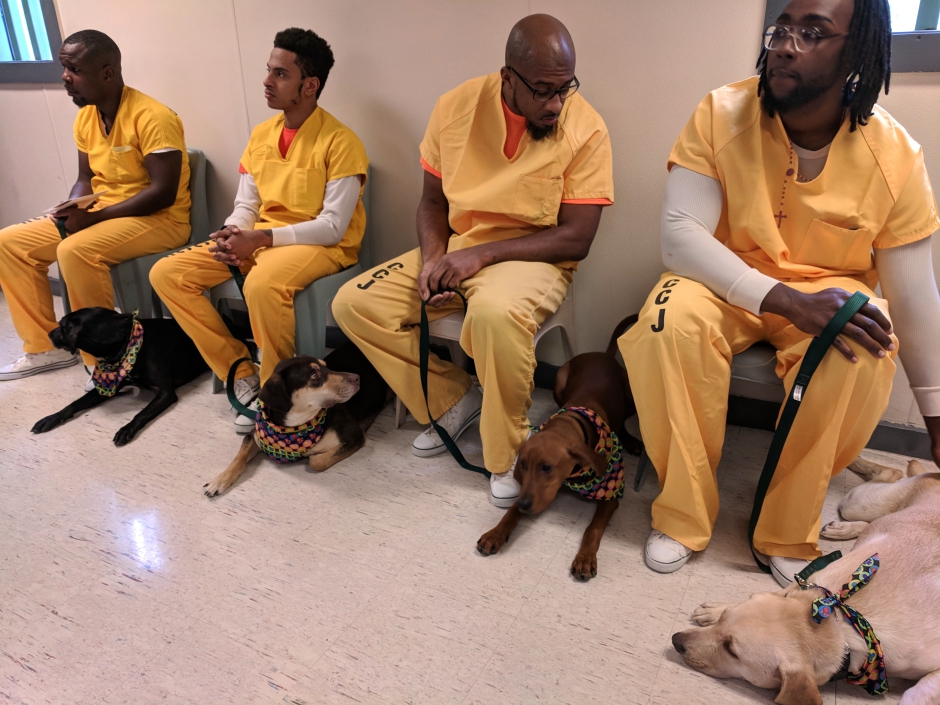 Young said the county is seeking another $150,000 in state dollars to grow it further as a re-entry therapy.

“It’s really easy to say yes to programs like this when we know they have such a great effect on the population that’s coming out,” he said.

“The inmates are really starting to get the benefit,” Young said.

“They’re changing every day with these dogs. It’s working.”

Camden County Correctional Officer Dennystor Nieves sees a direct line from the program to the rehabilitation of the men and women who participate in it.

“Because they are something here, they should be something outside of here,” Nieves said.

Dogs trained through the program can perform basic commands for their counterparts. More than anything else, however, they are equipped to become companion animals for servicepersons whose post-traumatic stress disorder (PTSD) has made it difficult for them to acclimate to civilian life.

“It’s going to take a lot of pain away, a lot of anxiety,” said William Taylor of Deptford, a U.S. Army veteran who will be adopting service dog Hank. 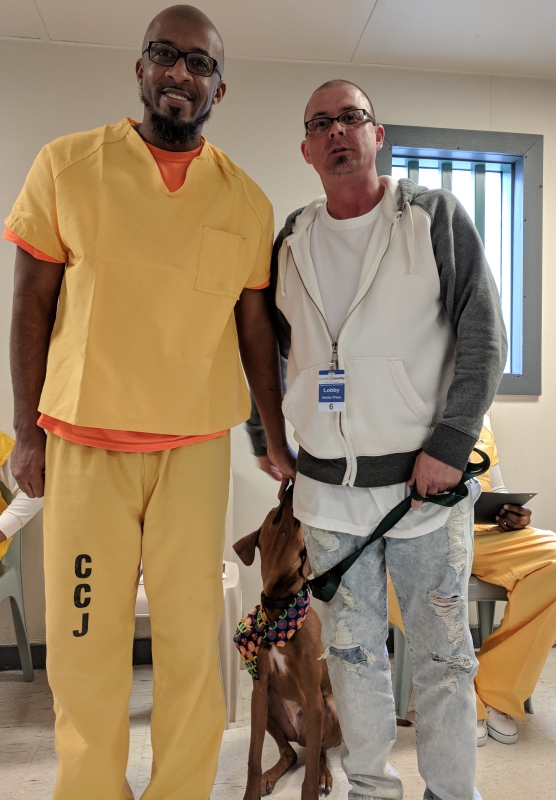 “I’ve been in and out of the psych ward from the VA hospital,” Taylor said.

“If it wasn’t for the inmates and [trainer]  Marissa [Corbett], I wouldn’t be able to afford a dog like this.

“I’ve been waiting for this,” he said.

U.S. Naval veteran Chris Sendler of Gloucester City thinks service dog Reese will help him with “getting back out in society.”

Sendler, a father of four, said he suffers PTSD from a 2011 encounter with Somali pirates during his time on the aircraft carrier USS Enterprise.

“Your thoughts start taking control of you,” Sendler said.

“I kind of shelter myself away.”

The men who trained the dogs for those veterans say the process helped their personal rehabilitation, too.

Anthony Saulters, who trained service dog Lacey, said the program has taught him “patience, responsibility, and the obligation to care for someone other than myself.

“There is a lot of hard work that goes into the training and discipline of these dogs,” Saulters said. “I truly believe this program will help a lot of inmates with several aspects of their lives – be it anger, grieving, and most importantly, being responsible.” 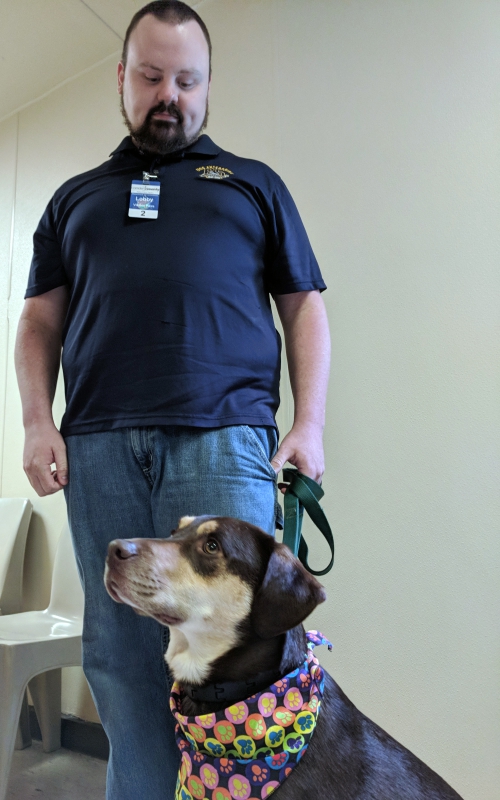 Juan Hernandez, who trained service dog Reese, called it “the opportunity of a lifetime.

“I’ve learned to be more responsible, instructive, given organizational skills, and to keep a schedule.

“Most of all, I’ve learned from the people in this program,” he said.

“We really came together as a dog panel family.

“I’d like to thank Marissa, our trainer,” Hernandez said.

“Without her, we’d all be chasing our tails.”

Arthur Wimberly of Pennsauken, who last year received Juno, the first service dog to come through the program, said he plans to tour nursing homes and hospitals to brighten the days of patients there.

“[Juno is] a balance between my sanity and everything that goes on in my life,” Wimberly said.

“Aside from all the doors he’s opened for us, and all the things he’s learned, he has such a personality and a charm about him, I want to share the wealth.” 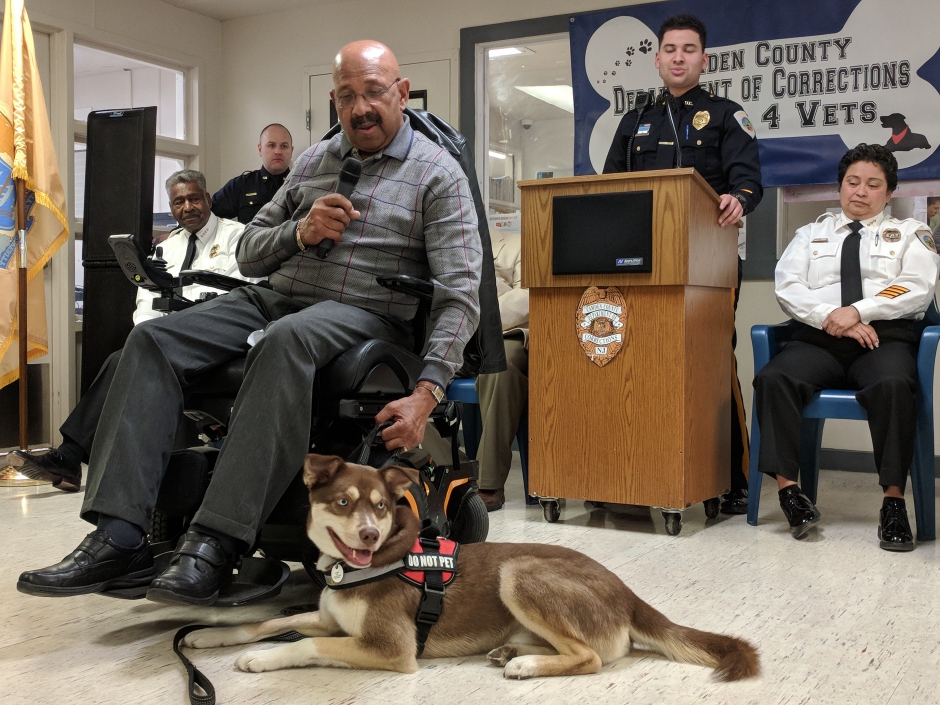 “It’s a total collaboration between the inmates, the dogs, the veterans,” said Rev. Floyd White of the Camden County Office of Veterans Affairs.

“You only get out of life what you put into it,” Camden County DOC Director David Owens told the graduating class.

“Well done, and thank you.”