Locally, 13,334 people have been infected by the virus and 581 have died from related complications. County officials urge residents to not hold indoor gatherings, cooperate with contact tracers. 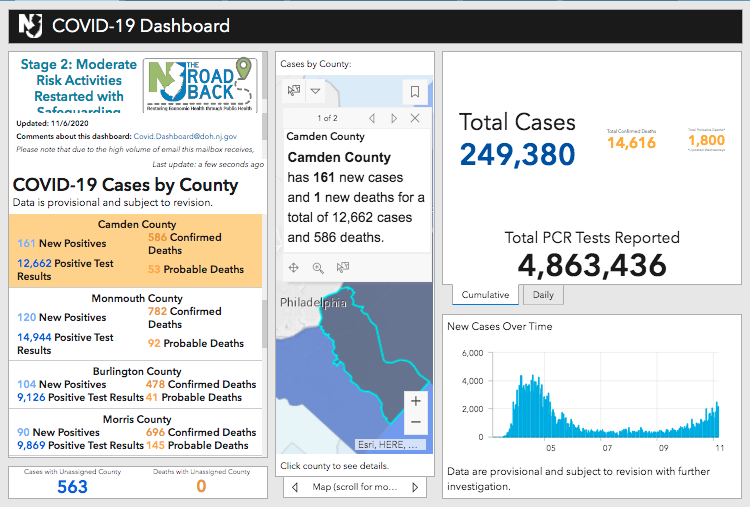 Camden County saw its largest single-day tally of novel coronavirus (COVID-19) infections Thursday, with 242 local residents testing positive for the virus, according to reports from the Camden County government.

That brings the local impact of the pandemic to 13,334 infected residents and 581 related deaths.

“The COVID-19 virus is transmitting through our community right now at a very rapid pace,” said Camden County Freeholder Jeffrey Nash in a briefing Thursday.

“We are now reverting back to trends that we have not seen since March and April.”

On October 10, the county logged 338 new COVID-19 cases, Nash said; at the time, they represented a 41-percent week-over-week increase. By comparison, the county reported 463 new cases from November 1 through 5, and is currently averaging roughly 111 new cases a day, “the highest seven-day average we have seen in the crisis,” he said.

“Many of these cases appear to be not severe in nature, however, hospitalization in the South Jersey region is increasing,” Nash said.

As isolated cases appear in schools, students are quarantining at home due to contacts with people who are testing positive, and residents should “expect to see a similar phenomenon among the adult population in the workplace,” he said. 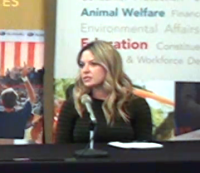 Nash advised residents “first and foremost, do not hold indoor gatherings,” which he called “the number one cause of the spike in the pandemic.

Keeping socially distanced and masked indoors is important, Nash added, noting that “eating and drinking is not a loophole for you to exploit so that you don’t have to wear a mask.”

The freeholder also urged residents to get their flu shots and beware of the spread of that virus as the weather turns.

“We cannot afford to be fighting a public health war on two fronts,” Nash said.

Rianna DeLuca, Communicable Disease Investigator for the Camden County Health Department reminded residents that they can spread the virus at least two days before they begin to show any symptoms, “so that’s why it’s really important to social distance when you’re at work.”

“We’re seeing the trends,” DeLuca said, including transmission within households, gatherings among friends and family, indoor dining, and reports of people being at work during the infectious period before they’re aware of their COVID status.

Camden County has 60 active contact tracers, and is tapping into its surge capacity of as many as 100, DeLuca said. Anyone with questions about the contact tracing process can call 1-800-999-9045.

Throughout New Jersey, 249,380 people have been sickened by COVID-19, and 14,616 have perished from causes related to the virus. In addition to those lab-confirmed fatalities, the state also recognizes another 1,800 probable COVID-19-related deaths.

Long-term care (LTC) facilities account for almost half of all deaths in the state and one-sixth of those infected, and new cases continue to occur there.

LTCs are believed to be associated with 60 percent, or 346 of 581 total deaths in Camden County: 343 were residents and three were staff.

At this time, 50 of the 56 LTCs in Camden County have experienced at least one case of COVID-19.

According to the New Jersey Department of Health COVID-19 dashboard, on November 6, Camden County was fifth in the state in new COVID-19 cases, with 174.