Investigators are looking for leads from the community after unknown people fired seven shots at the home of a young couple. Both are officers in the department who welcomed a child 10 days earlier. 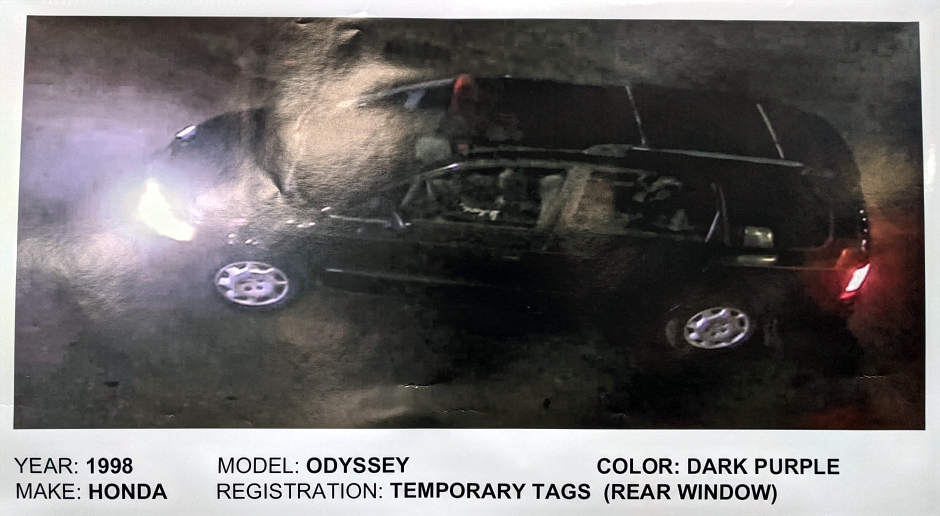 The Honda Odyssey that Camden County police believe was used in a shooting. Credit: Matt Skoufalos.

Camden County Police are looking for help identifying the people who they say shot up the Camden City home of two police officers and their infant child Tuesday night.

About 15 minutes before midnight on September 15, police said assailants fired seven shots at their home in the 2900 block of Clinton Street while the officers and their baby slept on the second floor.

The officers have been with the department for two and four years, respectively, and were on family leave; their child had been born just 10 days earlier.

Investigators believe they’re looking for three or four suspects: at least two shooters and the driver of a 1998, dark purple Honda Odyssey with temporary tags in the rear window. The car was recovered in the 600 block of Clinton Avenue.

It’s the first assault on Camden County officers since 2018, when two plainclothes detectives were ambushed in the Bergen Square neighborhood of the city. The victims of Tuesday’s shooting are assigned to community policing details, which stings the department even more.

The attack occurred in East Camden, a community in which Camden City Mayor Frank Moran raised his own children, and which he represented on city council for 20 years.

The mayor described the neighborhood as a bedroom community, “where neighbors look out for each other.” He said the attack troubles him especially because the city is trying to create stable housing for its public employees.

“Our goal is to make sure that our new young officers reside in the city,” Moran said. “We wanted folks to buy homes.” 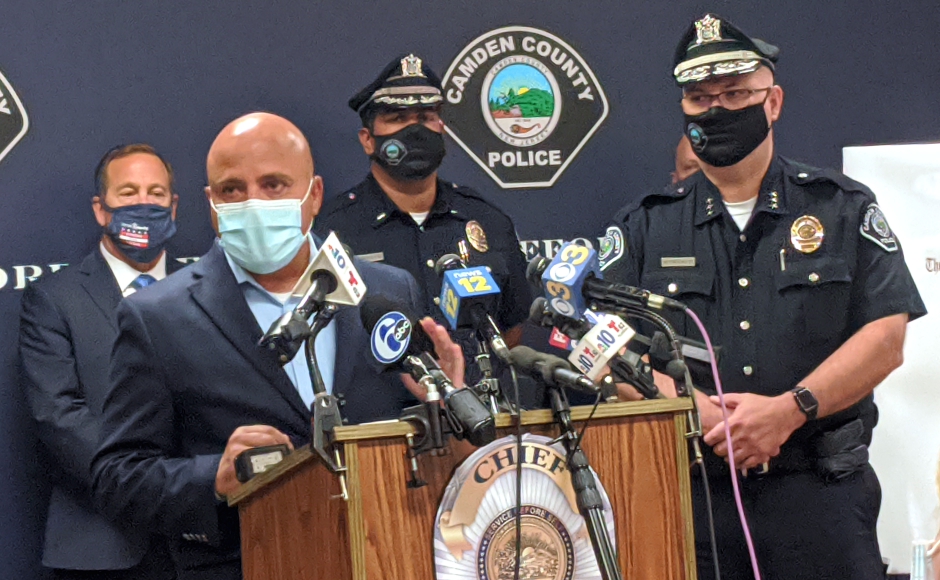 The mayor said he would dedicate every available resource “to make sure that we bring these two individuals to face the law and throw the book at them.

“We have to send a message, and the message is we will not tolerate that,” he said.

“We’re serious about going after these guys.”

Camden County Police rely on ballistic-sourcing technologies to identify the sources of shootings in the city, and every time there’s a report of shots fired, “I’m concerned that an officer’s injured,” Chief Joseph Wysocki said.

But the chief admitted to being deeply troubled by the shooting, particularly in a political climate that has put police tactics at the center of a national conversation on civil rights.

“It’s been a trying summer,” Wysocki said. “We keep saying, ‘it’s not Camden,’ and now it is. We haven’t seen anything like this here.”

The department “can’t police this city alone,” the chief said, asking residents from what he described as “a tight-knit community” to call in anything they might have on the incident.

“I just need anonymous tips,” Wysocki said. “We’ll be able to take it from there.”

Department chaplains are working with the family to comfort them, the chief said, adding that the couple does want to remain in their home. Importantly, he said an assault on officers shouldn’t undo the groundwork the department has laid establishing community relationships.

“We need to keep our focus on what our game plan is,” he said. “Less than 2 percent of the city is involved in crime. I’m not going to let three people or four people change what is going on in Camden.”

On Friday, a $42,500 reward was offered for information leading to the capture of suspects in the incident: $20,000 from the New Jersey Policemen’s Benevolent Association (PBA), $10,000 from the Federal Bureau of Investigations (FBI), $5,000 each from the Fraternal Order of Police (FOP) and Bureau of Alcohol, Tobacco, Firearms, and Explosives (ATF), and $2,500 from First Colonial Bank of Collingswood.

Anyone with information is asked to contact Camden County Police.