Trending
You are at:Home»Government»Camden County»Camden County to Expand Project SAVE Courtroom Advocacy Program to 20 Towns in 2019

Begun in 2014 in Gloucester Township, where crime has fallen 34 percent since its rollout, the ‘third-gear policing’ project provides counseling interventions for people charged in addictions-related cases. 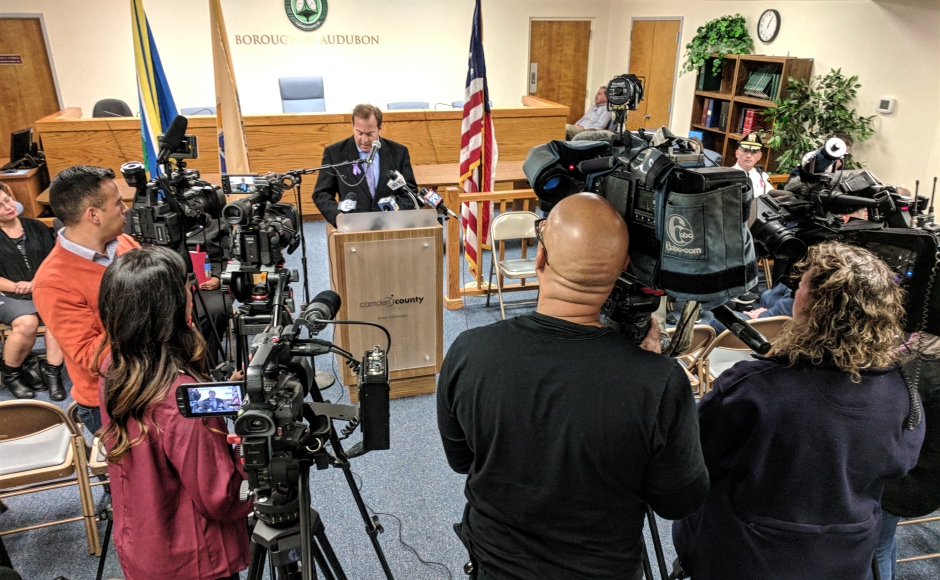 At a press conference in Audubon, Camden County announced the rollout of Project SAVE advocates to 20 local municipalities. Credit: Matt Skoufalos.

Nationally, overdoses have claimed more American lives than the Vietnam war, and close to 50 percent of the county inmate population enters incarceration with a substance abuse disorder.

Those numbers indicate a public health crisis, solutions to which have been slow to develop, difficult to fund, and challenging to replicate on a distributed scale.

Since its 2014 opioid summit, Camden County has enacted a number of policies aimed at addressing the various causes and effects of the public health crisis around the disease of addiction.

It’s merged the county offices of mental health and addictions services, provided targeted outreach to overdose victims and their families, and even joined a racketeering lawsuit against opioid manufacturers.

And starting in 2019, 20 towns will adopt the Project SAVE (Substance Abuse Visionary Effort) courtroom advocacy program created in Gloucester Township.

The county government will seed the project with $100,000, and will pursue grant funding to sustain the project in the long term, said Freeholder-Director Lou Cappelli. He promised “continuing dialogue” with local leaders, as “mayors are waiting to see what the costs are moving forward.” 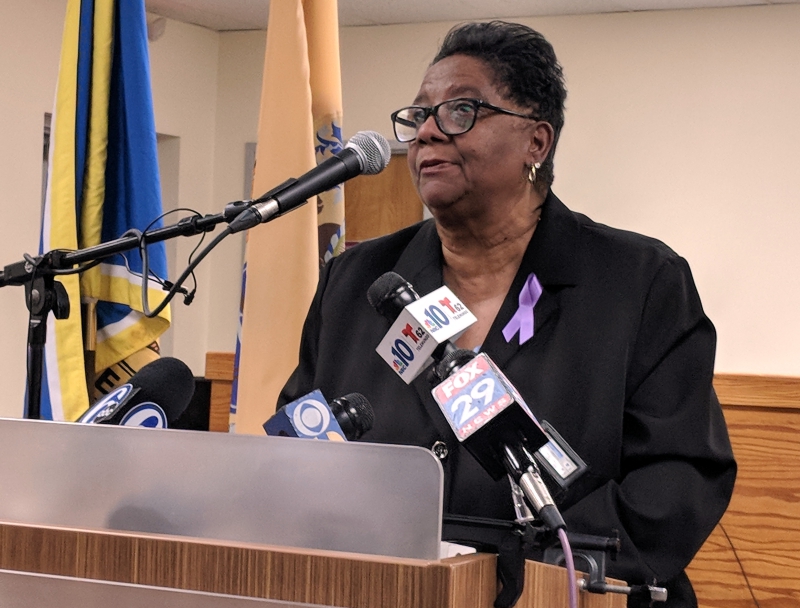 “We’re not sure exactly what this is going to cost yet,” Cappelli said.

“For 2019, Camden County will make sure funds are available.”

Lawnside Mayor Mary Anne Wardlow said her community is joining the pilot project to address “people who have become part of the revolving door” justice system.

“As a small town, our courts have become an expense to us that we really have a hard time with,” Wardlow said.

“[But] it’s not just money. It’s also lives we’re trying to save.

“To have someone be able to counsel them, to be a navigator to get into the programs, will help all of the children,” she said. “I know there is not one person here who can say they have not been touched by something or someone in this opiate crisis.”

Gloucester Township Police Chief Harry Earle described Project SAVE as “just another example of our third-gear policing model at work.” Designed to limit the number of repeat offenders and prevent the commission of violent crimes, third-gear policing offers prevention and intervention services beyond arrests alone.

“If we truly wanted to prevent crime and save lives, we needed to assist those suffering from their earliest contact with the criminal justice system,” Earle said. “It was clear we needed professional addiction counseling services in our courtroom.” 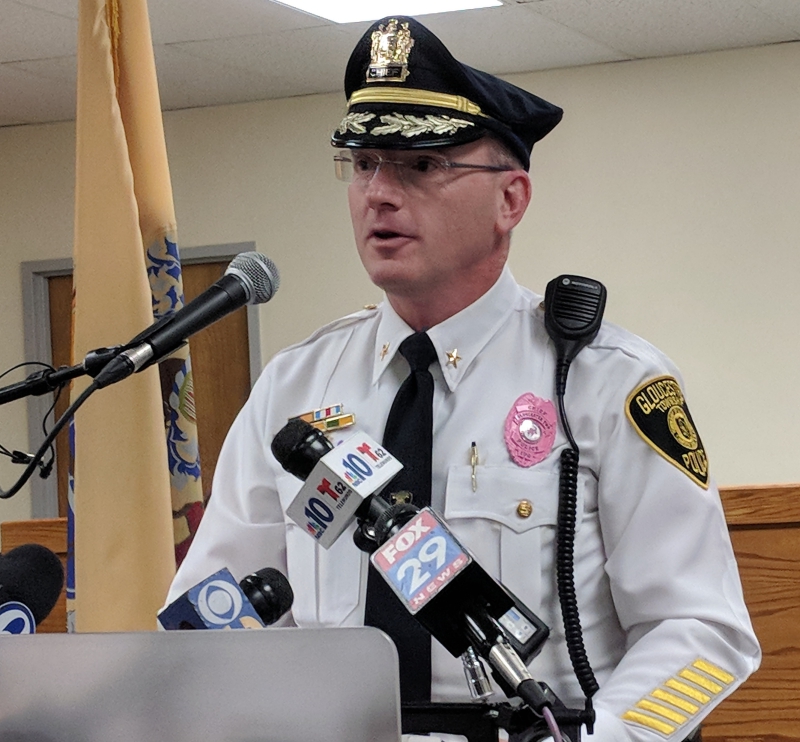 Modeled after its domestic violence advocacy program, which connects abuse victims with support services and counseling, Project SAVE has enrolled 274 defendants enrolled in Gloucester Township since 2014, with 178 participating in treatment.

Earle said the approach has halved violent crime since Project SAVE was introduced, and dropped overall crime in Gloucester Township 34 percent.

“Project SAVE has saved and altered lives,” Earle said.

“There are parents, wives, friends, and family who have come to our court looking for help for their loved one because they’re afraid they will commit crimes or lose their lives.

“It was a true mindset change for police officers, and I really am proud of everyone at Gloucester Township police and Mayor [David] Mayer for having the courage to say, ‘We really need to do something different.’”

The advocacy can take the form of referrals for treatment services, phone counseling, and other forms of support that “may go on for weeks, months, years,” Earle said.

“It’s not a formal metric, but the connection is really vital, and a very important part of the program.”

In 2015, Angel Nelke was introduced to the SAVE program in Gloucester Township municipal court, and saw it as an opportunity to “get started on what they’ll probably already have me do.

“Even when I wasn’t doing so well, the advocate in the courtroom was still reaching out to me,” Nelke said. “I’ve even referred a few of my friends to him.” 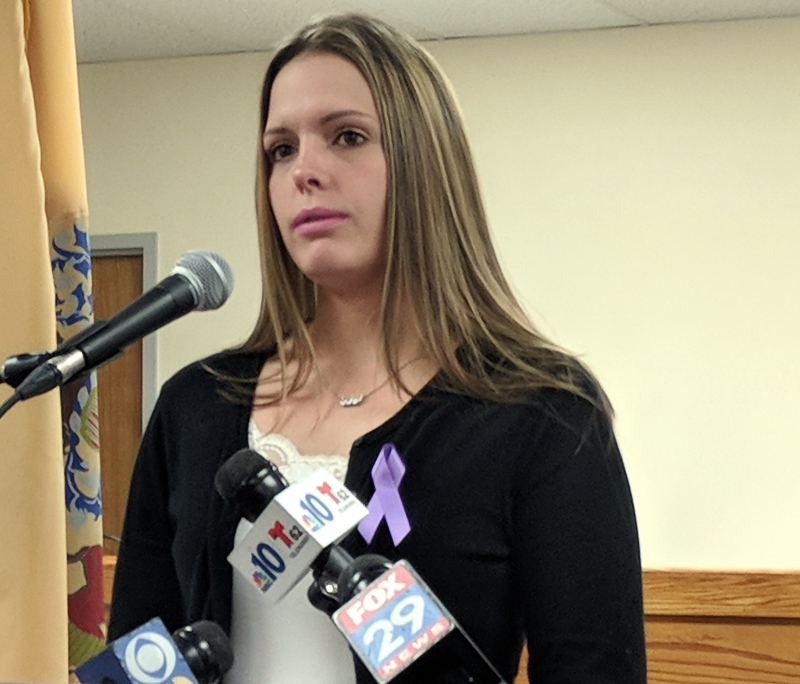 Angel Nelke said Gloucester Township’s Project SAVE advocate helped her get into a sober living house after a drug-related arrest. Credit: Matt Skoufalos.

Last year, Nelke spent four months in jail for violation of her probation, and her SAVE advocate helped her check into a sober living house.

In May 2018, she celebrated a year of sobriety.

“It helped me so much, and I hope someone sees me here, or gets introduced to this program in court, and thinks, ‘Maybe that can be me too.’

“Never give up hope,” Nelke said.

“Nobody is ever too far gone. If you are seeking some type of treatment, then you do still have something deep inside you telling you ‘leave this go; move forward; live the life you’re intended to live.’”

Audubon Mayor John Ward called the program “a no-brainer” for the borough, describing Project SAVE as “a local response that needs to happen.

“Early intervention works, we know it works, and we want this program in Audubon,” Ward said. “Their families want it, and they want it, even if they don’t know it at the time.

“We want this to happen as soon as possible so we can start diverting people who don’t need to be in the criminal justice system to get the help they need,” he said. “January 1 can’t come soon enough.” 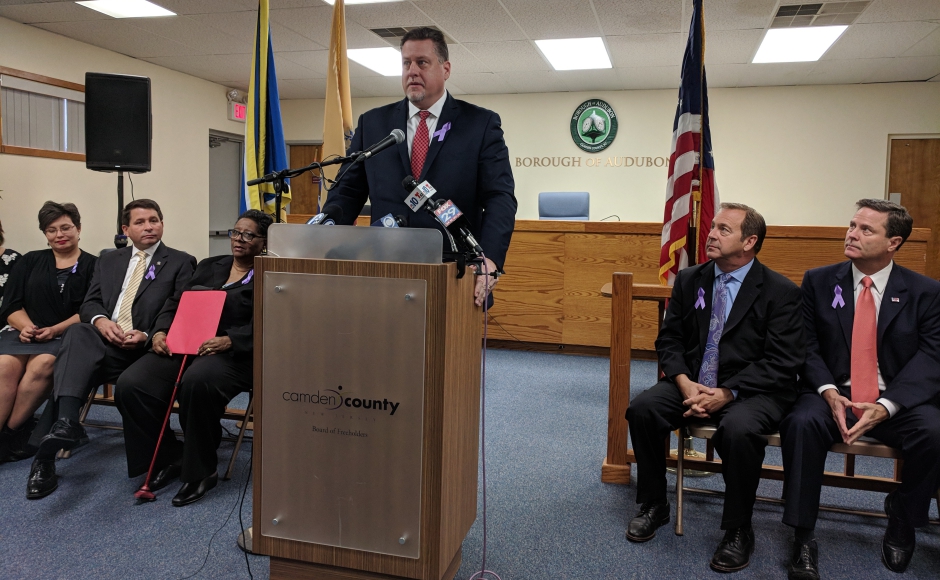 Begun in Gloucester Township, Project SAVE will begin to be offered in the following Camden County municipalities starting in January 2019: