Authorities are looking for 53-year-old Brian Walker of Camden City in connection with a shooting at the Cherry Hill Towers apartments. A 29-year-old Camden City woman is being treated for multiple wounds. 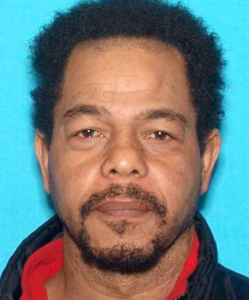 Brian Walker, 53, of Camden City, is wanted in connection with an attempted murder case in Cherry Hill. Credit: CCPO.

Police are looking for a Camden City man they say is the top suspect in an attempted murder case.

Fifty-three-year-old Brian Walker is wanted in connection with the shooting of a 29-year-old Cherry Hill woman, according to the Camden County Prosecutor’s Office (CCPO).

The incident occurred at the Cherry Hill Towers apartments around 11:30 p.m. Sunday night.

He may be driving a gray 2005 Dodge Magnum with New Jersey plates ZUA-48V, which belongs to the victim.

The woman is being treated for multiple gunshot wounds at an area hospital; her current physical condition is unknown.

Anyone who encounters Walker is asked to call 9-1-1.