The change in zoning laws will allow the township to bank more than 500 units of affordable housing for future development opportunities while satisfying its third-round COAH obligations.

On Monday, Cherry Hill council will vote on zoning changes to a handful of sites in order to satisfy obligations under third-round rules of the state Council on Affordable Housing (COAH).

The revisions would establish zoning overlays at:

The four overlays would create realistic opportunity—a phrase dating back to the 1985 Mount Laurel decision—for the siting of 520 affordable housing units within the township while insulating it from potential builder’s remedy lawsuits. They would also bring Cherry Hill into compliance with a negotiated settlement to provide 2,829 new units of affordable housing, said Bridget Palmer, Director of Communications for Cherry Hill Mayor Chuck Cahn. 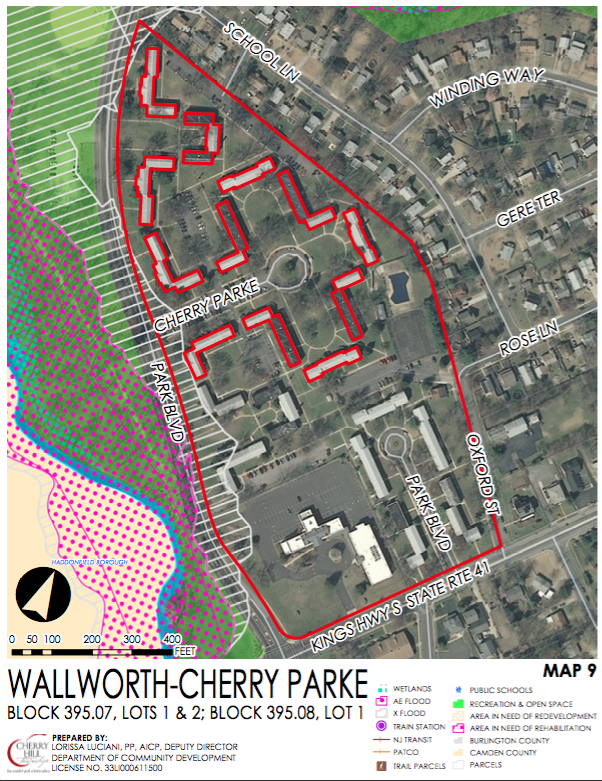 On Friday, Palmer said her office had fielded multiple inquiries about plans for the Wallworth-Cherry Parke-1010 Kings Highway site specifically.

It is the only one of the four overlays that presently contains affordable housing units (208 condos and 78 apartments) that ostensibly would be at risk were the area to be redeveloped.

Palmer was emphatic that none of the properties in question is the subject of interest from any developer, and that none has been designated for redevelopment, a lengthy process with its own set of legal thresholds.

“There’s nothing imminent happening, period,” she said. “We get that there’s concern, and it is confusing.”

Designating an area as being in need of redevelopment requires local action motivated by a planning study and the satisfaction of any of eight, specific criteria outlined in state redevelopment law. Four such redevelopment zones already exist within the township, including the Park Boulevard Gateway project, details for the redevelopment of which were recently approved by township council. 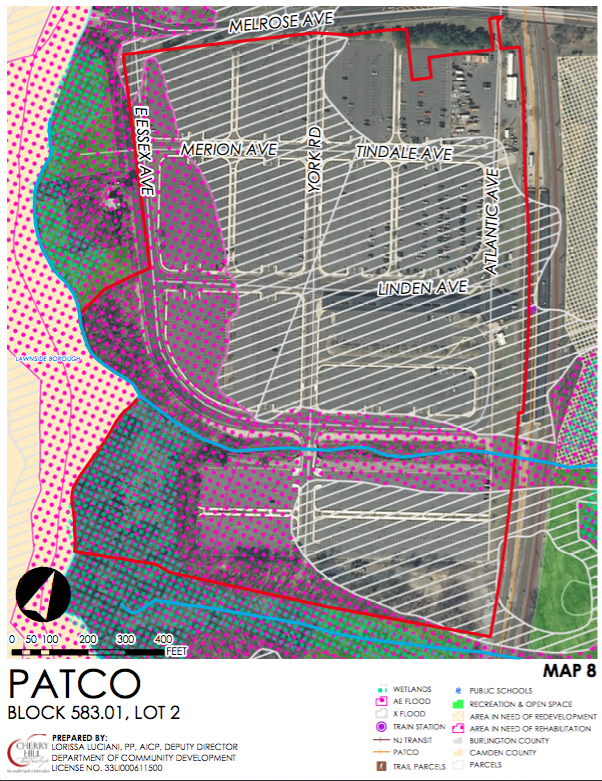 Next in the queue for the local government to consider is the 19-acre Hampton Road Gateway lot, which includes former warehouses of the Saunders Publishing Company, and the 35-acre Victory Refrigeration site, Palmer said.

The ordinance scheduled for review Monday also removes the Syms overlay from the township housing plan because that building is being developed by the University of Pennsylvania Health System.

Cherry Hill has identified other areas as being in need of study for potential redevelopment, including the 13-acre Cuthbert Boulevard Gateway and 14-acre Route 38 Gateway sites; however, those have not been formally designated as such.

While 23 of the 152 apartment units coming to the former Haddonfield Lumber site on Brace Road will be designated affordable housing, that site is not part of the COAH settlement. 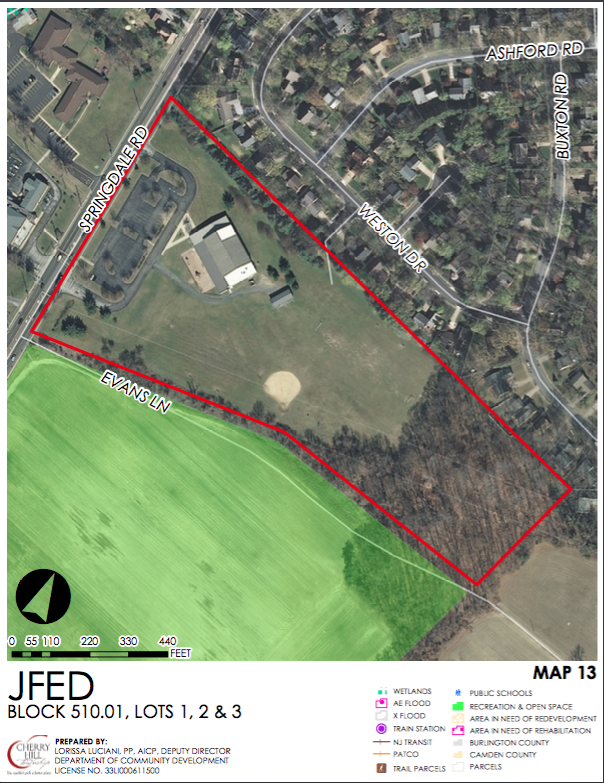 Palmer said that the affordable housing inventory at the Wallworth-Cherry Parke-1010 Kings Highway site does not count towards the township’s affordable housing obligation due to the age of the units there, which predate the 1985 Mount Laurel doctrine. However, creating the zoning overlay does allow Cherry Hill to claim credit for the 286 units of affordable housing that presently exist onsite.

“The idea was to create this overlay zone in this area where housing already exists, which allows us to secure the credits and satisfy the obligation without adding any additional impact,” Palmer said.

“This is not a redevelopment,” she said. “There is no developer interested in [the Wallworth-Cherry Parke] site. There are no imminent plans to develop the site. All it means is that if the site were to be sold at any point in the future, it would be developed with that 15 percent [affordable housing] set-aside.”

Palmer said the revised zoning overlay also reduces the current maximum allowable building height at the Wallworth-Cherry Parke-1010 Kings Highway site by five feet, and adds 25-foot buffers from neighboring properties throughout the area, “whereas in some parts of the existing site, there is no buffer,” she said. 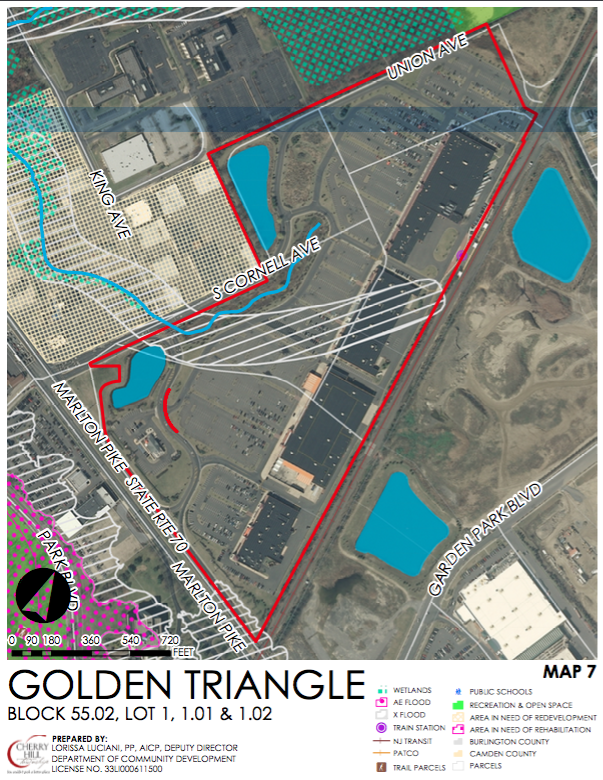 “Anybody who wanted to come in now and buy the property at the current zoning could build something higher than [what is allowable in]the current overlay,” Palmer said.

The Mayor’s Office is sensitive to the apprehension with which some residents may have received the news about the changes, Palmer said. She encouraged that those with questions call, e-mail, or attend the council meeting to voice their concerns.

“All we can do is encourage people to reach out to us and get the information before they rush to judgment and let that fear take over,”she said.

Township leaders “are very cognizant of the fact that Cherry Hill is a developed town,” Palmer said; focusing zoning overlays on areas already used for housing inventory can help to preserve “the character and integrity of neighborhoods” without opening up other areas of the community to development.

“Part of why the overlays are so important is because it’s a mechanism that has allowed us to satisfy our affordable housing obligations,” she said. “By doing that, we’re protecting the town from builder’s remedy lawsuits that allow a developer to come in and dictate [terms].”

In a conversation with Cahn last year, he emphasized the importance of planning and zoning laws in perserving open spaces in Cherry Hill, like Springdale Farms and the Woodcrest and Merchantville Country Clubs.

“We believe in not using open space for development,” Cahn said. “Our obligation as a township is just to provide the realistic potential [for affordable housing]. That’s all towns do. Whether it ever gets built or not, it’s not our responsibility.”