Trending
You are at:Home»Schools»Cherry Hill»Cherry Hill East High-Schoolers Walk Out in Protest of Involuntary Teacher Transfers

An estimated 30 teachers within the Cherry Hill school district are being ‘force-transferred’ to new assignments within the district for next year. Students say the loss of popular educators, coaches, and club advisers will unnecessarily disrupt the district. Officials have declined comment. 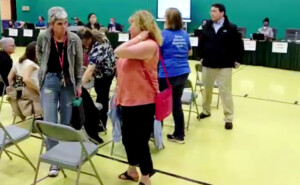 Despite the strident objections of students, faculty, and families, several Cherry Hill schoolteachers will be relocated to new assignments within the district next year under administrative prerogative.

The move, described as involuntary or forced transfers, follows a process outlined in the collective bargaining agreement between Cherry Hill Public Schools and the Cherry Hill Education Association (CHEA).

However, the scale of the transfers, the lack of clarity around them, and their anticipated impact on schools that are still reeling from the impact of the novel coronavirus (COVID-19) pandemic on learning environments has elevated the issue to one of community concern.

At the April 26 Cherry Hill Board of Education meeting, students, faculty, and township residents made plaintive appeals to reverse course or offer a more substantive explanation for the decisions.

“We understand that there may be ratios, which may dictate the allocation of resources from one school to another within the district,” Levin said. “It does not appear that there’s any consideration given to the disruption of the school’s community. Many of the teachers identified for relocation have taught at East for decades, and are experts in their instruction, and [are] advisors in clubs and sports.

“It is a divisive blow to a community that is trying so desperately to keep united physically and mentally,” she said.

Cherry Hill East junior Harry Turner said the lack of explanation given for the decisions reflects “the glaring hypocrisy” in messaging from district administration. 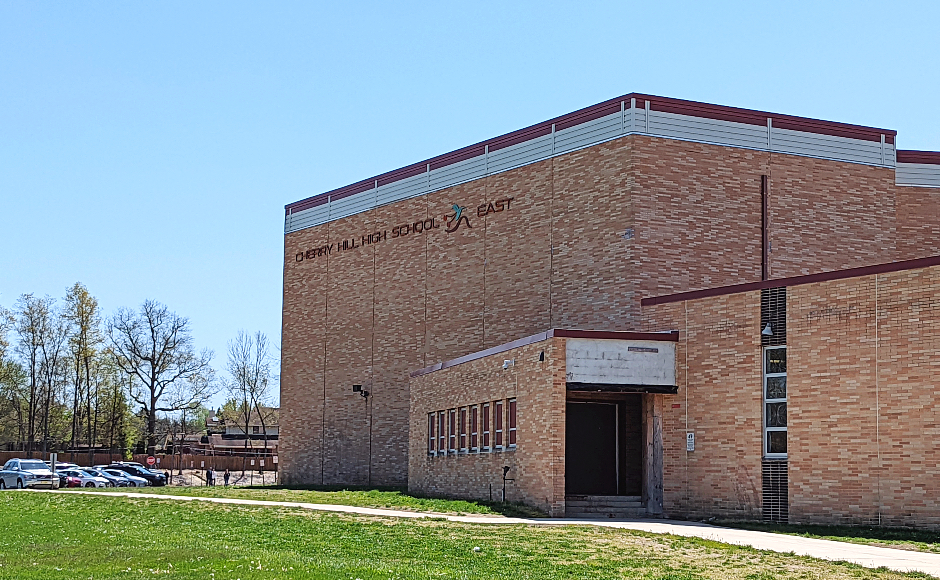 “So many times, we’re told that the goal of the courses and classes we’re being taught is for student wellness,” Turner said Tuesday.

“It’s really a disservice to the Cherry Hill community, and needs rationale behind it.”

At East, petitions were organized for popular faculty affected by the moves, like U.S. History teacher Tom Rosenberg, mathematics teacher Susan Nicolozzo-Dollarton, and biology teacher Kim Achilly, who told the board that she’s being asked to give up an honors program at the high school to teach “courses for which I have no interest, no expertise and no passion.”

“As I see it, everyone loses,” Achilly said, as reported by Cherry Hill Patch. “For what end? And for what purpose?”

With no answer forthcoming from district leaders, students at Cherry Hill High School East organized a walkout Friday afternoon in support of their teachers.

The cause was taken up school-wide, with students from all four grades protesting outside the building for an hour prior to dismissal.

Seniors Chloe Reid and Gia Rebstock said they were most going to miss health and phys-ed teacher Mike Melograna, who also coaches the varsity boys soccer team at East. 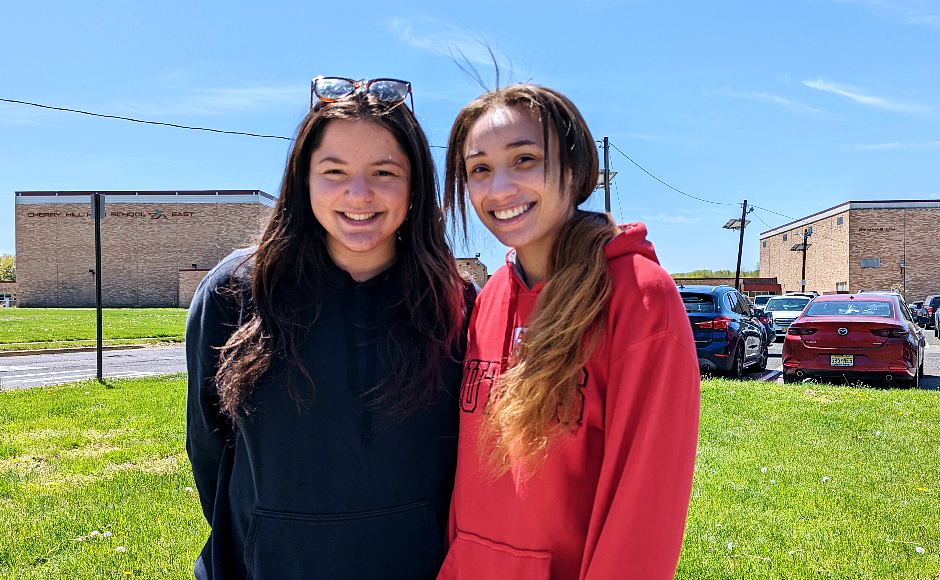 “The teachers they took are the ones closest to East,” Reid said.

“They feel more at home, like family; the ones that are transferring are the best ones.

“It’s really sad to see them go. During corona, they helped a lot.”

Rebstock said students “saw teachers physically upset and distressed” at the news of their involuntary transfers.

To her, Friday’s student walkout was about communicating disappointment with the administrative decision to disrupt the school culture.

“We’re trying to stand up for the teachers who don’t have a voice in all this,” she said. “They always teach us to stand up for ourselves. I just want people to hear us.”

Sophomores Stephen Robinson and Bennett Nickel said it was important for them to demonstrate to show their support for the role their teachers play in the community at Cherry Hill East.

“We’re passionate about this,” Robinson said. “You can tell that everyone cares.”

Nickel said that participating in the walkout “felt like you were part of something big.

“Everyone wants their teachers back,” he said. “Because there’s so many of us, they’re going to notice that; maybe they’ll realize.” 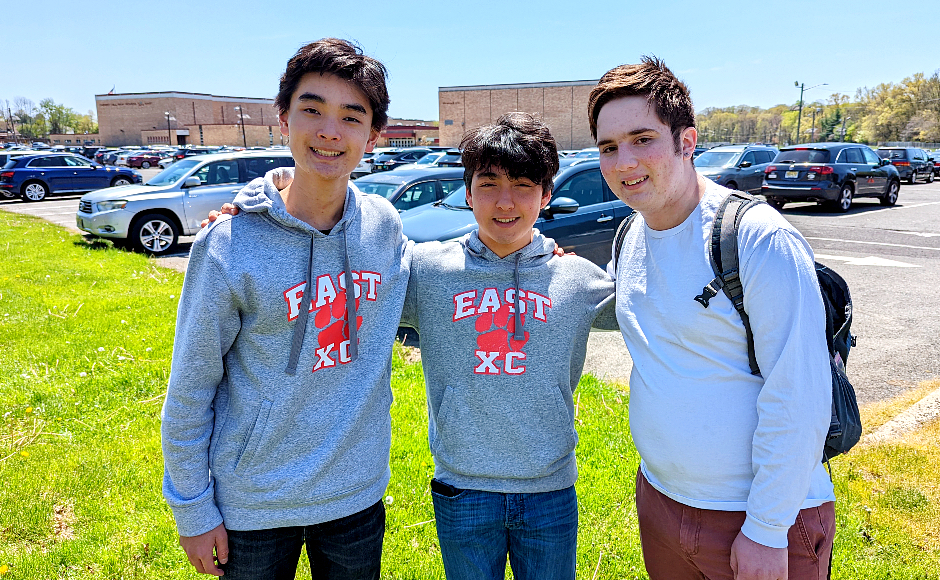 Among the organizers of Thursday’s walkout were juniors Aiden Rood, Grant Yoon, and Christopher Shin.

Rood, who will be a student representative to the board of education next year, said the demonstration was important because it underscored the disruption the transfers have caused within the high school.

“These aren’t just regular teachers who are great at teaching classes,” Rood said.

“This is about our community. We’re not going to just move on.”

Shin, president-elect of the student body for the 2022-23 school year, said the school on the whole was “incredibly appalled” by the forced transfers. After surveying the student body and meeting with principal Dennis Perry and Superintendent Joe Meloche, Shin said the only recourse left was to demonstrate.

“It’s the strongest form of student voice,” Shin said. “We understand that teacher relocations need to happen; doing so in this way harms both [high] schools. We need our teachers here.”

“A lot of the students are upset,” said Yoon, who is vice-president-elect for the 2022-23 school year. “We hope the community understands that our East community will be hurt by the decision.

Rood said that although students at East demonstrated Friday, dissatisfaction with the decisions to reassign teachers reverberated district-wide.

“If the entire district feels they’re being hurt, why move them?” Rood said. 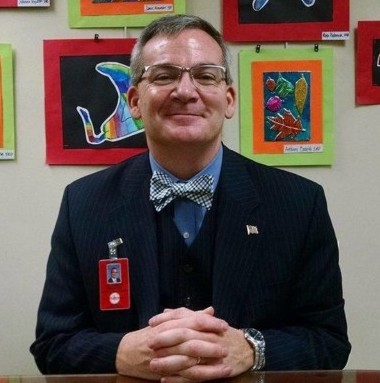 Meloche’s only public comments on the subject came during Tuesday’s school board meeting.

The superintendent spoke then about the normalcy of teacher reassignments as being related to staff allocation, school enrollment, or addressing other administrative goals.

“Any staff member being transferred has a demonstrated record of success, has established they can maintain relationships with students, and has a positive impact with students,” Meloche said at the time.

“The hard part with that is there’s really not a way to announce publicly that this is going to happen and this is whom it’s going to impact,” he said.

“As a community, we spend a lot of time talking about change to try to best meet the needs of the children who are arriving on a daily basis.”

The superintendent did acknowledge that there were more transfers “at the secondary level than there have been in the last few years,” and added that they were made “in an effort to improve situations for all students at all schools.

Subsequent questions—including those about school demographics, the fate of clubs and sports that were losing advisors and coaches in the moves, or how the disruption squared with administrative messaging about community-building—went unanswered.

Similarly, the district teacher’s union has been measured in its comments on the transfers. Staff allocation decisions are not able to be negotiated within the framework of the collective bargaining agreement under which the district and its staff operate, meaning that there’s little teachers can do to oppose the move through labor negotiations.

CHEA Local President Steve Redfearn offered a prepared statement that nodded to the framework of the process having been followed as per the agreement.

“The district must consider various factors as it relates to the educational needs of our students, an analysis of potential impact, and the benefits of the transfer to our students,” Redfearn wrote. 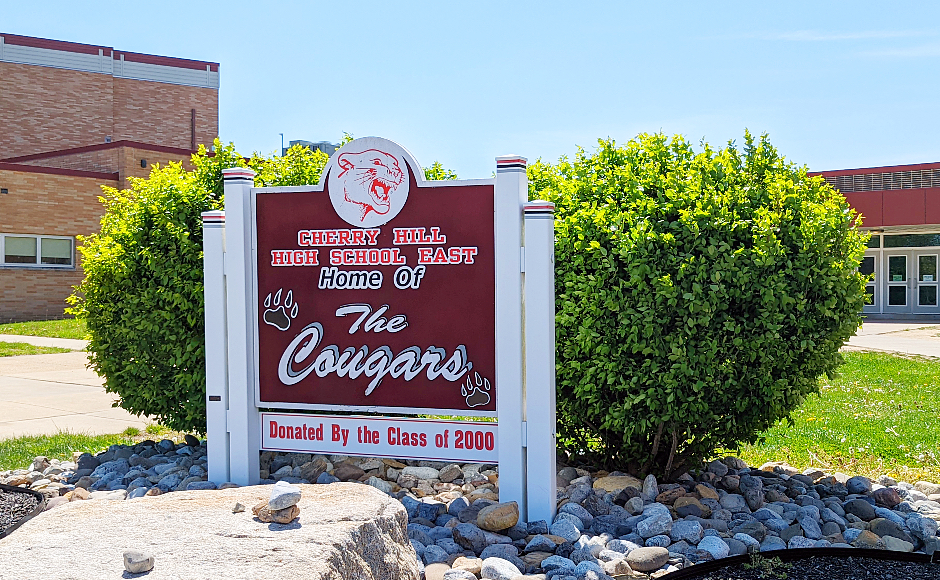 “As in previous years, we have found that the transfers have followed the process outlined above.

“Therefore, we will continue to closely monitor this situation to ensure that the rights of our members have not been violated and that the educational needs of our students are at the forefront.

“CHEA will continue to work with the Cherry Hill School District to ensure all students are in the best possible position to achieve success in schools,” he wrote.

Retired Cherry Hill East English teacher Julie Bathke, who taught for 15 years at the high school, said that the emotional impact of transferring teachers against their desires “is demoralizing to everybody.

“It’s devastating,” Bathke said. “Because all these people are good teachers, they’re going to do the best that they can, but this will have changed them forever, and they’ll never be the same.

“The district has wounded people,” she said. “What they’re feeling is grief and helplessness, because there’s nothing that can be done.”

Bathke, who never faced an involuntary transfer during her teaching career, said that relocating teachers after they’ve helped students navigate through the chaos of remote learning during the pandemic compounds the weight of the decision.

Bathke worried whether the scale of the transfers would be a deterrent to other teachers choosing to apply to Cherry Hill in the future. She suggested that some of the teachers who were being moved previously had been critical of the district, or were high-earning veterans being goaded into retirement as a cost savings.

“Teaching is not a particularly portable career,” Bathke said. “Once you’re at a certain level on the pay scale, very few districts are going to offer you that same level. If they were even to go to another school, they would not get the financial benefits that they get here.”

Bathke also believes that the indifference shown by district leadership to the outpouring of support from staff, students, and the broader community is a tactical choice meant to wait out objectors.

“They’ll stonewall, most of the people will fall into place, and it’ll go away,” she said. “That’s what the administration is counting on.”