Firefighters can face the worst the world has to offer in a 24-hour shift. That’s why they make dinners that nourish the body and the soul, and offer a time to celebrate their best moments together. 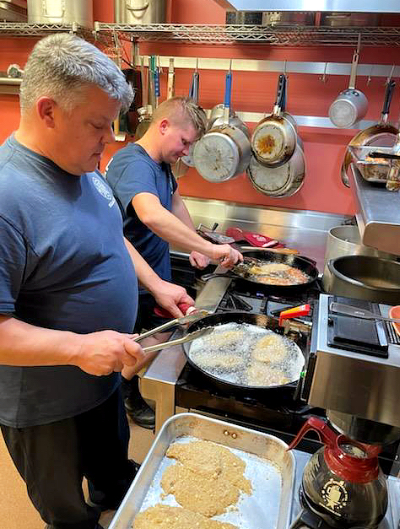 Tonight’s meal is chicken cutlets over spaghetti with clam sauce; a recipe handed down from the kitchens of the Fiorentini family, whose own Steve, Ricky, and Tom staffed the township fire service through the years.

It’s fine fare for a weeknight by any standard, not just for the ingredients and the care with which they’ve been prepared, but for the generations that have passed down the recipe from Ma Fiorentini into the capable hands at Squad 13.

Cherry Hill Firefighter Phil Cook taught Luft to make the clam sauce; Tom McGovern helped him get the cutlets just right, with an assist from Tommy DiDomenico, who showed Luft how to slice them paper-thin.

“You pick something up along the way from everybody, and you make it your own,” Luft said. “A lot of people will say, ‘Chicken cutlets with clam sauce?’ It’s an odd combination, but it works.”

Sometimes an important modification will put a familiar recipe over the top. Once, when his captain asked for shrimp and grits to ease the burden of an overtime shift, Patterson elevated the familiar favorite with some mango habanero on a whim. After that, previous versions of the dish didn’t seem to measure up.

Twenty-four years in the firehouse taught Patterson a lot more about cooking than did his high-school job slinging pies at the former Little Caesars in Audubon. Today, he’s a formidable baker whose macarons are among the most heavily anticipated treats in his repertoire.

“I just learned on the job here,” Patterson said. “I like the technical aspect of cooking.”

On a 24-hour shift, what’s for dinner can sometimes be the motivation that carries a work crew throughout their day, which is why meal plans are laid in the morning. If a busy day doesn’t leave a lot of time for kitchen work, the crockpot is always within reach, and the portions almost always yield leftovers.

Some station houses embrace themes: Taco Tuesday, Seafood Saturday, Sunday gravy. At Squad 13, breakfast is only coordinated on weekends, unless it’s a holiday. But there’s always coffee on.

“What a day entails will help us decide what to make,” Luft said. “We like to work hard, and at the end of the day, we want to come together and eat something good and savory.

“It’s like Sunday dinner but every shift,” he said. 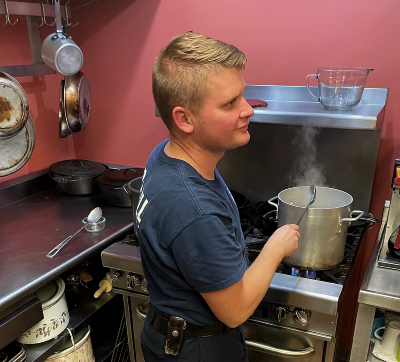 Every station handles its meals differently, but the costs of preparing them fall to the firefighters.

A $20 per month “house tax” covers staple goods to fill the pantry; the other ingredients are purchased near-daily, or brought from home, depending upon the menu.

And just like at home, sometimes a special treat will get squirreled away in the closet or the back of the freezer—although hiding it’s sometimes a guarantee that it’ll get snapped up if discovered.

The lieutenant, for whom cooking is both a passion and a release from the stress of work, doesn’t get to stand on the line as often given his responsibilities as an officer with the company. But when he has the opportunity, it’s one of his happiest tasks in the station.

“It’s a way to decompress and be a fireman again,” Houck said.

Every firehouse in the township has a kitchen, and in every company, there’s somebody who cooks. As refined as Squad 13 likes to make its meals, “guys have to be brutally bad to not cook,” Houck said.

Such care goes into firehouse dinners not just because the crews like to eat well, but because mealtime often begets story time. Like the recipes themselves, there are favorites that get passed around and retold as much for the benefit of newcomers as the entertainment of veterans.

“It’s a way for me to learn about the past here,” Luft said; “to learn about some of these characters that maybe retired before I came onto the job. When you meet them in person, you’re able to put a face to it.”

Importantly, everyone’s fair game at meal time—“There’s no rank at the table,” Houck said—and gallows humor can dominate the tone. For teams working shoulder-to-shoulder in a high-stakes, public-facing job, it helps defuse tensions that could manifest otherwise in unhelpful ways.

“There’s a little bit of dark humor, but that’s all part of us dealing with it so we can continue to go out the door,” Houck said. 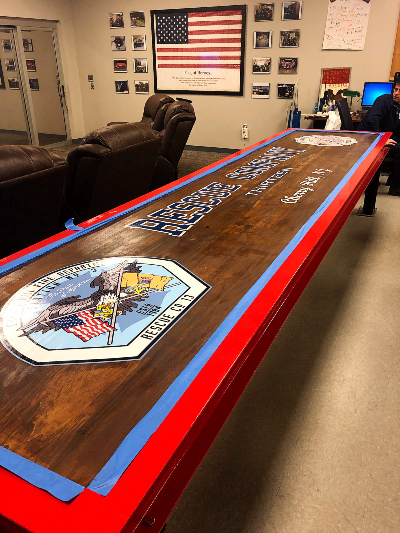 Even the firehouse table itself is an expression of the personalities of the squadmates who lives there.

Each of the tables in all six Cherry Hill firehouses looks different from the others.

Squad 13’s is constructed from remnants of a bowling alley from Woodcrest Lanes.

Rescue 13’s is ringed at the edges by red steel I-beams.

Squrt 51’s, a circular table to fit a smaller kitchen, was fashioned from a reclaimed industrial spool.

“The guys take pride in it,” Houck said. “It’s the centerpiece of the room.”

“This is really our second home,” Luft said.

“We’re here so much—a third of our time—that you’ve got to make it comfortable,” he said.

Cherry Hill Fire Chief Chris Callan believes the firehouse kitchen table is “probably the most important place in the firehouse,” and the firehouse dinners “have always been the best meals” he’s had.

“The most special time of the day is dinnertime,” Callan said. “You’re breaking bread with your brothers and sisters, and you’re thinking about the citizens going to bed. The night could bring anything, but this is us right now, and we’re prepared to take whatever challenges present itself.

“Firehouse meals are so important, and a huge part of tradition,” he said. “It bonds the men and women, brings them together, and unifies them.

“It’s also a proving ground,” Callan said. “How much do you love your brothers and sisters? You want to cook them a good meal. It allows them to express a lot of care and affection for each other as well.”

Knowing there’s going to be a good dinner and camaraderie during it anchors firefighters to get through the uncertainty of a day in which they’ll likely be tested to save lives and property, putting themselves at risk in the process, the chief said. 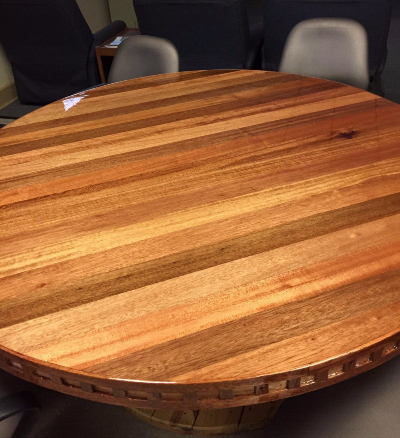 “Even though these guys are together for 24 hours, they reconnect at night, and it’s done with breaking bread,” he said.

One of the underlying pitfalls of laboring for long hours to make a great firehouse dinner is the unstated risk that it might not come together if a call comes in.

Every chef knows that liability is built into every meal, but it doesn’t stop them from pushing to take it there.

“Many, many times the guys are putting their heart and soul into the meals, and tones do drop,” Callan said.

“Whenever they get back, they try to regroup and make it good.”

When a chef really sticks the landing, however, there’s one surefire way to tell.

“The best compliment that somebody could get was from Tommy DiDomenico,” Callan said. “He would look up and say, ‘This sucks. Never make this again.’ Then you knew you had a winner.”