The location in the 1400 block of Route 38 was robbed February 9 by a woman who allegedly produced a note demanding money. 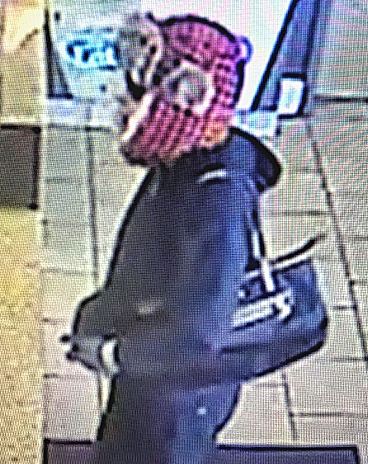 Surveillance photo of a woman wanted in the February 9 robbery of a Cherry Hill Dunkin Donuts. Credit: Cherry Hill PD.

Cherry Hill Police are seeking a suspect wanted in the February 9 robbery of a Dunkin Donuts in the 1400 block of Route 38.

Investigators said a woman entered the store around 3:30 p.m. that day, and passed a note to the cashier demanding money.

She was allegedly given an undisclosed amount of cash, and is believed to have fled the scene in a gray Volvo missing both rear wheel covers.

The suspect is described as approximately 30 to 40 years old.

She was last seen wearing a red and black hat with ear flaps and large sunglasses.

Anyone with information about the case is asked to contact Cherry Hill Det. Ross Hensell at 856-432-8751, or
rhensell@cherryhillpolice.com.

Tips can also be submitted anonymously to tips@cherryhillpolice.com, via this webform, or by texting TIP CHERRYHILLPD followed by your message to 888777.