Trending
You are at:Home»Schools»Cherry Hill»Cherry Hill to Vote on $211M School Bond Tuesday

The three-question referendum could add an average of $232 in taxes per household for the next 20 years if all phases are approved. The total project could hit more than $306 million before state aid.

On Tuesday, voters in Cherry Hill will head to the polls to decide whether to advance the first school bond question the township has seen in 20 years.

The infrastructure project is being put to the public just as the debt service from its last referendum, a $52-million bond approved in 1999, is slated to come off the books.

Similar to the arithmetic of the $36-million Pennsauken school bond that passed in the spring, simply approving the first question on the ballot will get the bulk of the work done while lowering local school taxes about $4 annually for a home assessed at the township median of $223,500.

According to district figures, the existing impact of the debt from the prior bond is about $75 for a home assessed at the township median, which means taxes would fall by that amount if the bond fails. Cherry Hill residents can estimate their household tax impact via a calculator provided on the district website. 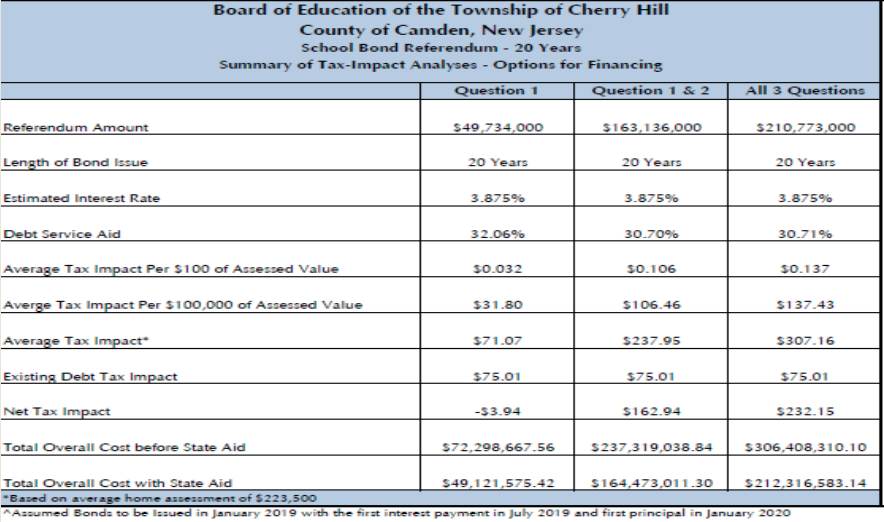 The core question on the ballot seeks $49.7 million for a number of facilities needs, including:

Those costs would be split about 60-40 between local taxpayers and state aid.

The district has said any questions that do not pass may be put out for another vote.

Question Two would add another $113.4 million to the costs identified in Question One, for a grand total of $163.1 million, including:

About 35 percent of the total cost of Questions One and Two ($57.8 million) would be covered by state aid, leaving 65 percent ($105.3 million) to be paid locally. That would result in an estimated, $163-per-household annual tax increase for a home assessed at the township median.

Question Three would add another $47.6 million to the proposed tab, bringing the total to an estimated $210.7 million if all three measures pass. It covers:

If all three questions pass, 64 percent of the entire bond package ($134.5 million) would be paid for by local taxpayers, leaving 36 percent ($76.3 million) covered by state aid. That would bring taxes up by an estimated $232 per household annually for a home assessed at the township median.

According to the district, only $5.11 million of the $210.7-million total project costs (2.43 percent) are ineligible for state aid; this includes paving, athletic field improvements, and proposed auditorium upgrades. The bulk of these are covered by in Question Three. Of the $24.8 million in proposed new construction costs, 38 percent ($9.5 million) would be eligible for state aid.

In total, the district said $20.4 million, or less than 10 percent of the proposed total costs, would be unfunded or ineligible for state aid. With principal and interest, the projected total cost of the bond would be $306 million, an estimated 35 to 38 percent of which would be covered by state aid. The net cost to the district would be $212.3 million, including a seven-percent contingency above the $210.7 million budgeted figure.

The Cherry Hill school district has provided a variety of resources on the referendum, including a spreadsheet on which facilities are affected by the passage of each question, a detailed slideshow on the specific plans for each school building, and an explanatory statement about the referendum.

Polls will be open to Cherry Hill residents from 3 to 8 p.m. Tuesday, December 11, to vote on the measure. Cherry Hill has 48 voting districts. To locate your polling place by address, click here.

Check back with NJ Pen Tuesday night for the results.