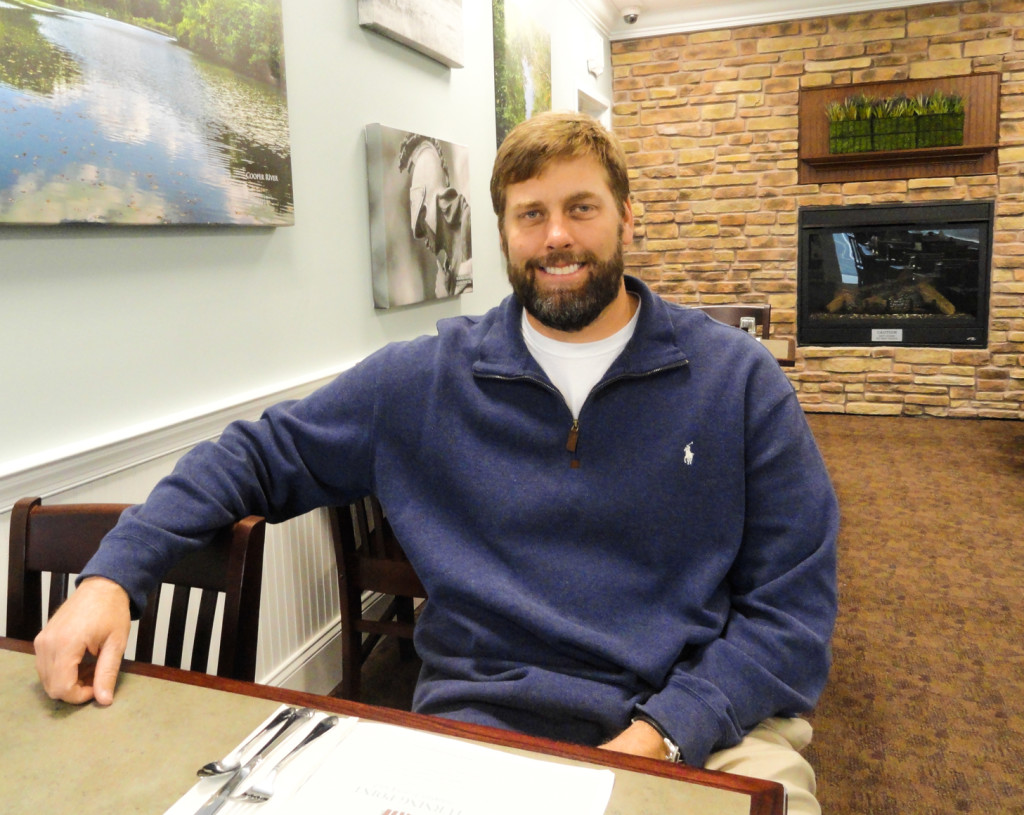 “I’m not some guy who wants to conquer the world,” said restaurateur Kirk Ruoff.

“I have three kids of my own; I go to basketball games,” he said.

Ruoff doesn’t want his employees to have to make that choice, either.

The man behind the Turning Point family of restaurants open his doors daily at 8 a.m. and closes them at 3, despite exhortations that he could make much more money if he only stayed open for dinner.

“Our motto is: serve the best breakfast and lunch you know how, and then go home to your family,” Ruoff said.

“We’ve been able to retain our employees a long time based on those philosophies,” he said. “We’re fast and furious for the hours we’re open.”

Still, even after 16 years and nine locations, Ruoff said Turning Point is taking a “big step” with restaurant number 10: the building at 606 Haddonfield Road represents its first opportunity anchoring a shopping plaza. 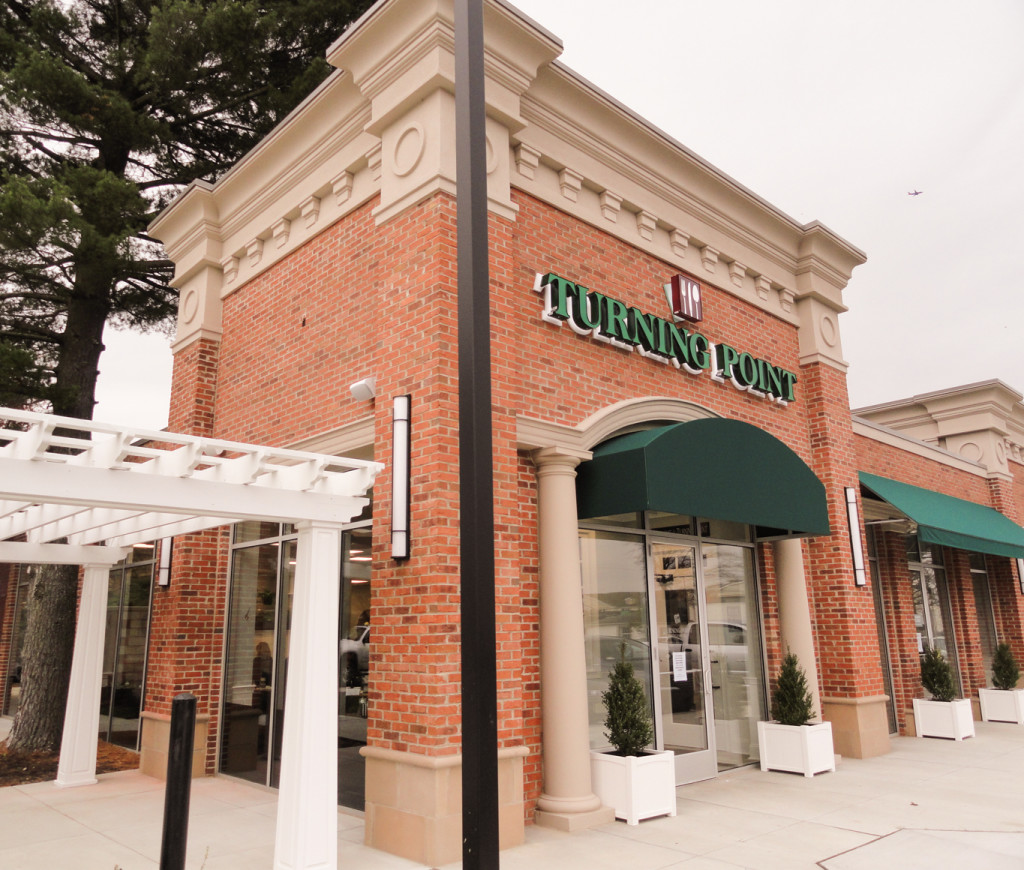 Putting a ‘flag in the ground’

After four years of middling results, the owner was willing to sell, just as Ruoff was looking for a way out of the corporate restaurant game.

“My wife said, ‘You need to figure out a way to be home when we have a family,’” Ruoff said.

“[The previous owner] advanced me a loan, I took it over and flipped it to breakfast and lunch, and never looked back.”

In the years since, Ruofff opened up six other Jersey shore locations, from Holmdel to Sea Girt, making his first inroads into nearby Burlington county with the eighth Turning Point, on Route 73 in Marlton.

As he scouted the surrounding area for a site to serve as his Marlton redoubt, Ruoff found himself priced out of the rents at the Cherry Hill Mall. But the little spot on Haddonfield Road that used to belong to Pier One Imports seemed a fine place to put down roots.

“Let’s pick out a busy road across from a busy town center, and put our flag in the ground and make our mark,” he said. 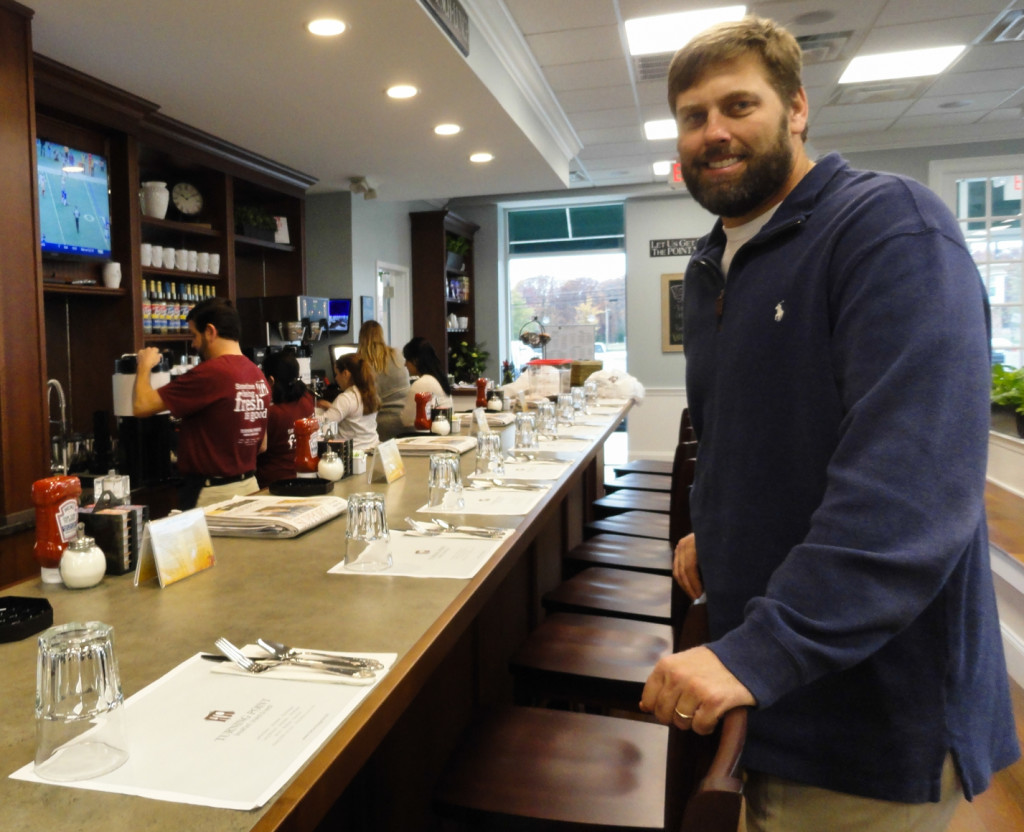 Ruoff at the counter of the Cherry Hill Turning Point. Credit: Matt Skoufalos.

‘Part of the Experience’

Although a breakfast-and-lunch-driven restaurant favors an older clientele, Turning Point has a number of modern touches, like free Wi-Fi and ample outlets for power-hungry phones, laptops, and tablets.

From the beach-hued pastel walls to the shore-house wainscoting, its seaside roots are evident in the décor.

Instead of boating and fishing accoutrements, however, the Cherry Hill space is appointed with silkscreened photographs of local landmarks.

A gas fireplace in the dining room is bound to be popular in the winter months.

The service shows forward-thinking touches, too. Water pitchers and coffee pots are left with guests, even if it inhibits purchases of higher-profit items like sodas, Ruoff said.

“I want to do things that nobody else is doing,” he said. “I want to give you the choice between regular Tropicana orange juice and fresh-squeezed.

“When we give crayons, we give Crayola crayons. It’s part of the experience.”

The coffee served at Turning Point is another part of that experience. Roasted in small batches by Clover Hill Coffee of Marlboro, NJ, it’s available in French presses. Brews include the high-end Jamaican Blue Mountain and Kona blends.

Recipes are the product of collaboration between Ruoff and his 14-year chef, Bonnie Iavaroni. From-scratch dressings and soups complement dishes like the OMG French toast (topped with pecans, caramel, bacon and mascarpone).

“We operate our breakfast lunch restaurant like most people would operate a high-end restaurant,” he said.

“It doesn’t have to be a foodies’ restaurant, but the reason that we’ve won all the awards we’ve won is because we focus on being the best breakfast and lunch restaurant we can.”

“During the first week of business we will offer 30 percent off the entire check, the second week 20 percent off and finally the third week 10 percent,” the restaurant declared on its Facebook page.