Trending
You are at:Home»People»Children Separated from Parents at U.S. Border Find Brief Respite in Camden Shelter

The Camden nonprofit Center for Family Services has received three teens removed from their parents by U.S. immigration officials as a border enforcement action. 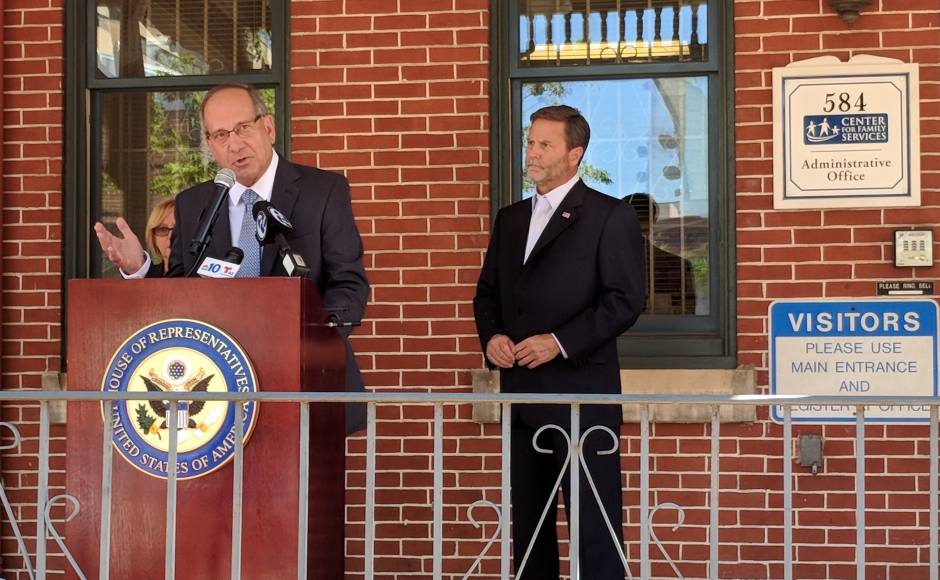 Center for Family Services CEO Richard Stagliano (left) supervised a visit by US Congressman Donald Norcross with the children in the agency’s care. Credit: Matt Skoufalos.

In the past year, the agency was approved for additional federal dollars to care for unaccompanied minors who arrive at the U.S. border without a parent or guardian.

But CFS never anticipated those resources would be dedicated to the care of children who’d been forcibly separated from their parents at the U.S. border.

“Shelters, that’s one of our core competency areas,” said CFS President-CEO Richard Stagliano. “We saw the need to care for children.”

Since U.S. immigration enforcement shifted to a “zero tolerance,” blanket denial policy this May, CFS’ 28-bed facility has housed three minors, aged 13 through 17, who were taken away from their parents at the border.

Two have been reunited with family members, although CFS would not say whether those reunions occurred within U.S. borders, in a detention facility, or outside the country. One teen is still currently in the agency’s care.

Details about the children and their circumstances are scant. All three hailed from South or Central America, leaving behind harrowing conditions in their native countries, including gang violence and conspicuous intimidation.

“Family members are sending them off because their lives are threatened,” Stagliano said. “It’s very emotional. “[The children]  come in, they haven’t eaten; they’re traumatized.”

In the care of the agency, children have access to recreation, therapeutic counseling, and six hours of daily schooling, Stagliano said. They receive intensive case management, including legal aid, and help from onsite Spanish-speaking staff.

The average length of stay at CFS is 35 days, but staff said the agency is making efforts to shorten that timeframe in the cases of children for whom they can locate a family member or “safe sponsor.”

But even a short-term stay in a place of refuge can pose additional anxiety for children when it’s time to relocate again, Stagliano said.

“One child felt so good in the facility, she didn’t want to leave,” he said. “The transition was again hard for her.” 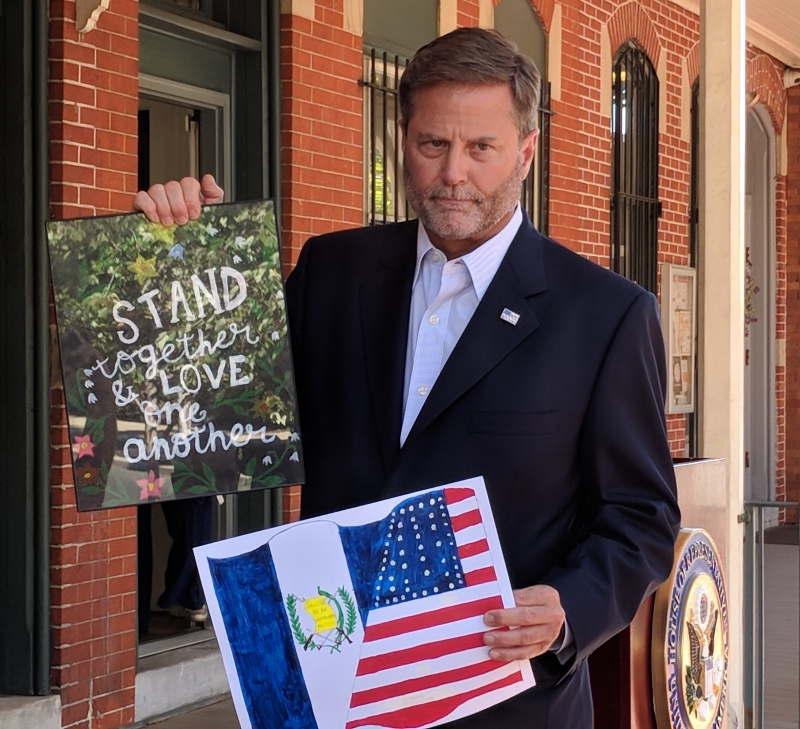 US Congressman Donald Norcross holds up children’s art presented to him by teens sheltered by Camden Center for Family Services. Credit: Matt Skoufalos.

The congressman had asked to visit with children who had been transferred to Camden from the southern U.S. border, but was made to wait two weeks by the U.S. Department of Health and Human Services (HHS).

HHS reportedly had planned to send a representative to oversee Monday’s visit, but didn’t do so.

Norcross described his interactions with the children in the CFS facility as limited by time and a language barrier, but reported that they appeared to him as typical kids, “pleasant and happy.”

“They reminded me of my grandchildren,” he said.

The children presented him with two handmade artworks, still wet to the touch. One was a combined rendering of the flags of the United States and Guatemala. The other read, “STAND together & LOVE one another.”

The lone remaining teen housed at CFS has been able to Skype with the father from whom he was separated at the border, Norcross said. The congressman didn’t know when, how, or whether they would be reunited, however.

He criticized the border enforcement action as a “flawed, fly-by-the-seat-of-your-pants policy” intended to discourage immigrants and asylum-seekers.

“I understand it’s a political world,” Norcross said. “I treat things, when it comes to children, much different.

The failure of the federal government to address the arrival of undocumented minors in the United States has been a persistent concern for years, but Norcross said he believes it’s possible to reach a humane policy solution that doesn’t involve the separation of families by federal officials.

“Comprehensive immigration reform is not beyond our reach,” he said. “Unaccompanied minors have happened; forced separation is different.”

CFS routinely accepts community support in the form of financial donations, material goods, or volunteerism. The agency is currently collecting goods for use by the children in its care as well as seeking households to foster them.