Trending
You are at:Home»People»Chris and Amanda’s Excellent Adventure

Before deciding where to put down roots and what to make of their lives, a Collingswood couple is quitting work, selling off their stuff, and cycling across America. 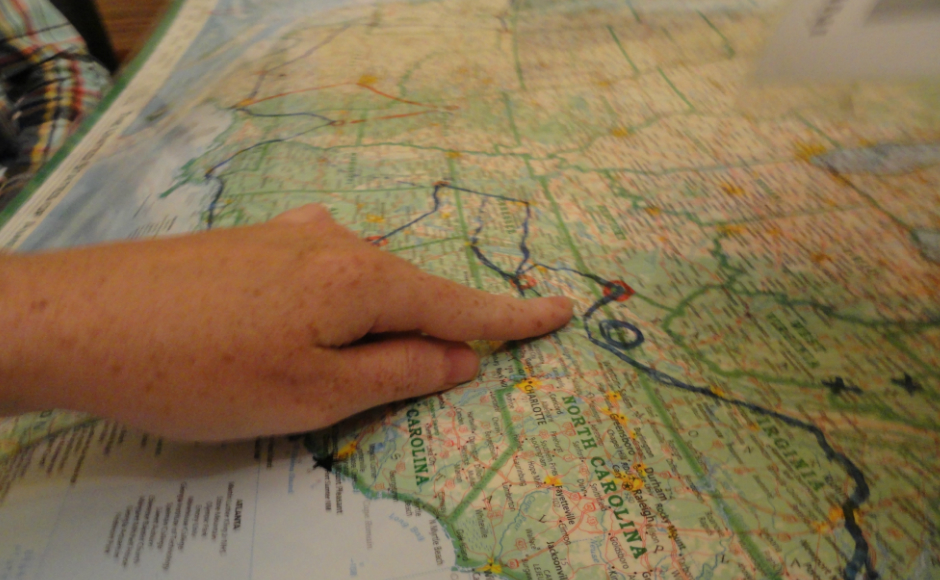 It started as a vacation plan, and sort of spiraled out from there.

At the beginning of their relationship, Amanda Andros and Chris Campbell had enjoyed a backpacking trip to Maine, hiking up Baldpate Mountain. The experience solidified their partnership even as it whetted their appetite for adventure.

Three-and-a-half years later, feeling stifled in their jobs, the couple started planning for a bigger trip, and their dreams got bigger as they did.

“We were at a crossroads,” Andros said. “I was teaching for seven years; Chris has been working at his job for a long time. We were trying to decide where we want to be in our lives before we put down roots again.”

“We hike a lot, and we were like, ‘We’ll hike the Appalachian Trail,’” Campbell said. “It’s an amazing hike. But if we’re going to do one huge thing and settle back down, we’ll visit the Pacific Crest Trail because it goes through so many different states.”

During the planning process, the couple’s car was totaled, and Campbell started cycling to work. Bicycles suddenly became a big part of their daily lives, and then worked their way into the plans for their trip…and then, at some point, became the mechanism for it. Eventually, they looked at one another and decided: let’s just ride our bikes across the country. 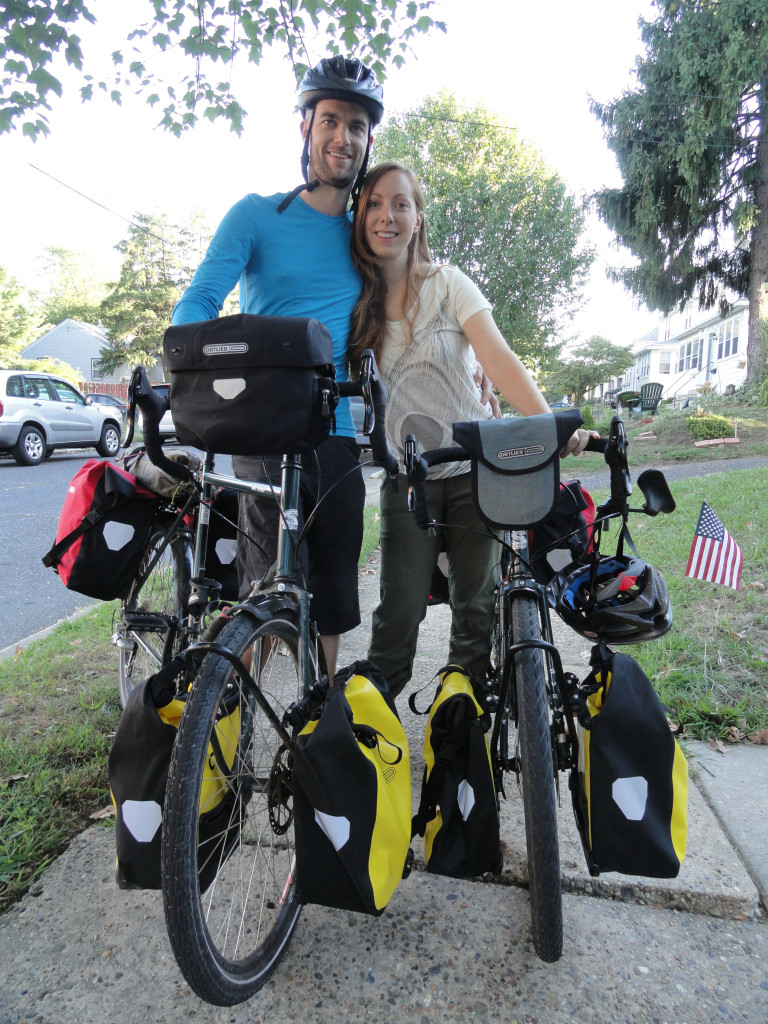 A few things triggered the move. First, Campbell happened on “Going Slowly,” the story of Tara Alan and Tyler Kellen, a couple whose two-year, worldwide cycling tour culminated in a Vermont homesteading.

Second, Andros quit her job as a public-school library media specialist to go work at Revolution Coffee Roasters in Collingswood, where the couple resides, and fell in more closely with the entrepreneurial set of the neighborhood.

She was there to see Haddon Township resident Tom Turcich set off on his World Walk, became close with the founders of the small business startups at The Factory, and started to take notice of how much more expansive her life became when she was able to slow its pace. It made Andros evaluate her own circumstances in much greater detail, from her occupation to her relationship.

“We want to spend more time with each other,” Andros said. “[Chris] gets home at 7:30, and as a teacher, I would be in bed by 9. If we did see each other, it was weekend-warrior style.”

At the same time, Campbell, who has worked in debt collections for the past five years, found his mind meandering at his desk at a job he resented.

“Over the past five years, I’ve come to hate our current cultural relationship with our economy,” Campbell said. “People put themselves in debt, and then they slave to work it off. The work-life balance is off.”

Their bike trip will offer no work-life balance, either (“It’s life-life,” Campbell said), but by pulling “all the stability” out of their lives, the couple expects to learn “how to manage everything,” he said. By only doing 40 to 50 miles per day, Andros said, the journey is “going to slow us down a lot.”

Their trip will begin at 10:30 a.m. October 10, with a send-off at Revolution Coffee Roasters in Collingswood. From there, Andros and Campbell will cycle south to Cape May, take the ferry to Lewes, Delaware, and ride on to Ocean City, Maryland and down the Atlantic Coast. They hope to make Florida to visit Chris’s sister, Nicole, by the holiday season.

After the new year, the couple will ride along the gulf coast, heading west to New Orleans, through Texas, and then up through New Mexico, mapping the high points in each state to throw in some hiking along the way. From New Mexico, they are aiming for Black Mesa, Oklahoma, and then across the canyon lands of Colorado, before winding down through San Diego, California and back up through Yosemite National Park, into the Sierra Nevada mountains by early spring.

Then they expect to cut across the Napa wine region up the coast into Seattle, Washington, and loop back down to Los Angeles by the end. In total, the couple believes the trip will take seven to eight months, “and then we’re going to somehow come back east,” Campbell said—all on a budget of $20 a day, while carrying their provisions, clothing, and camping gear along for the ride. 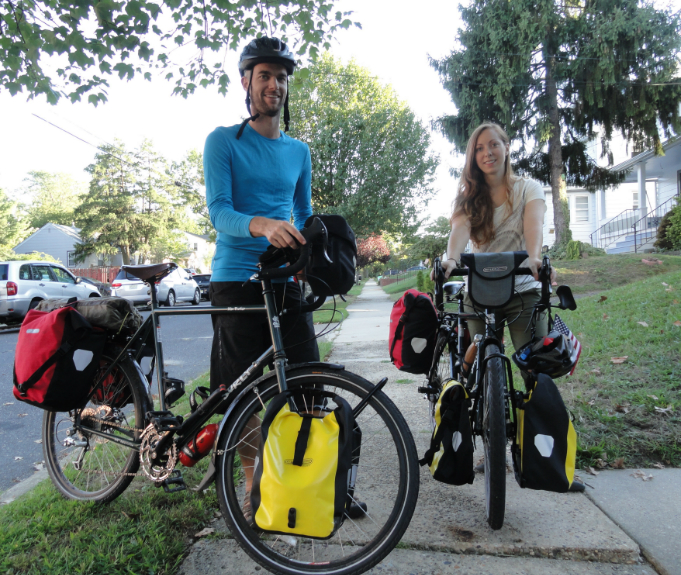 ‘Let’s do something big’

There are some outlying goals as well—stashing the bikes in Seattle for a couple of weeks and heading to Alaska to see the Northern Lights is one—and there’s always the possibility of extending the journey after it concludes out West.

“In L.A., if we’re still feeling up to it, we [could]fly to Europe,” Campbell said. “If this works, and we’re still happy, I would like to fly to someplace like Copenhagen, Denmark [or]Sweden, and then ride to the Arctic Circle.”

An original plan for the trip was even more ambitious, and would have begun in Morocco, until Andros’ family encouraged the pair to at least begin their tour in a country where they speak the native language. But that’s not to say that Andros and Campbell are the only adventure-seekers in their respective tribes.

The visit to Seattle will include a stop-off to see Campbell’s cousin Derek, who lives on a boat that he’s planning to sail to Hawaii. Andros’s Aunt Jane and Uncle David are “full-time RV’ers” who sold off everything in their retirement to travel by camper, she said. The pair aren’t sure what to expect from their cross-country cycling experience, but they are absolutely open to its possibilities.

“We’re both quitting our jobs, so let’s do something big, and re-evaluate how we feel about moving forward; figuring out what we’re passionate about,” Andros said.

“We want to meet people as we travel throughout the United States who share the same interests before we put down roots again and start jobs,” she said. “We’re always rushing home from work; we don’t have the time to really explore alternatives.”

“Slowing down and opening up, you get to meet people and see what they do in their day-to-day lives,” Campbell said. “I do debt collections. You can never be passionate about that. People are passionate about teaching, but Amanda was ready to move on.

“If you’re going to do something job-quitting, make it worth quitting your jobs,” he said.

You can follow Chris and Amanda on their journey at Soupylife.com.