Consideration of plans to renovate the district stadium, which dates to the 1930’s, led to a broader discussion about the facilities as a whole. The project could cost $4 to $20 million on a 20-year bond. 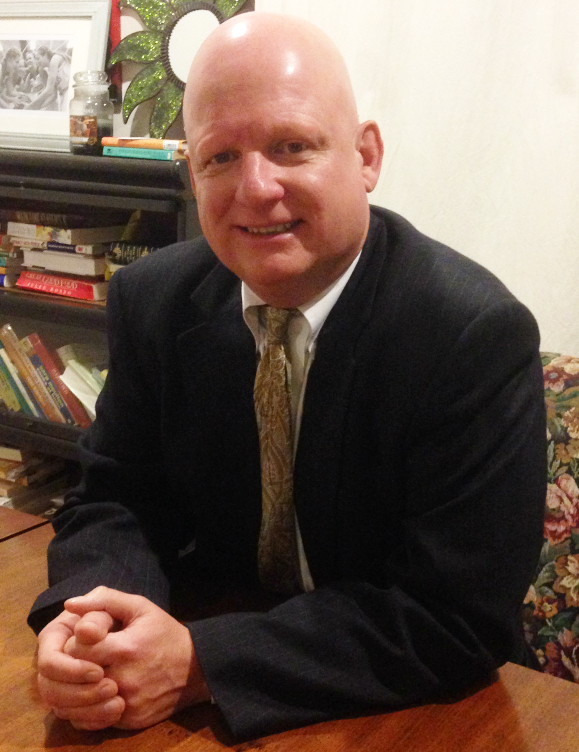 During the early days of Jim Hatzell’s tenure on the Collingswood Board of Education, the district took a $54-million facilities improvement project through a successful referendum.

Now in his third term and seventh year as board president, Jim Hatzell is preparing to take another school bond question to vote this fall, as the district seeks to address the condition of its high school athletic facilities.

Talk had begun in recent years of renovating the Collingswood High School (CHS) stadium, which, like its counterparts in Audubon, Haddonfield, and Haddon Heights, was a New Deal-era project.

After learning that the concrete alone needed to bring it into compliance with the Americans With Disabilities Act would cost $1 million, Hatzell said the board started talking about whether the existing stadium fits the needs of the district in 2017.

“If we’re going to spend a million dollars on that, it made us think about some of our other problems,” he said.

In February, the board convened a stadium complex steering committee consisting of five board members and 20-25 members of the public, Hatzell said. The group picked up with research done by the prior school board through May 2016, and solicited community input from district stakeholders, including PTA leaders.

The discussion that followed led the committee to realize that the current 5,500-seat stadium is “way bigger than we need,” Hatzell said; only half-full at its peak usage during graduation ceremonies. The group began to discuss how to best make use of the entire CHS athletic grounds. With organized sports forbidden in Knight Park on Sundays, talk turned to supporting borough recreational sports by expanding the football field to make it usable for soccer, too. 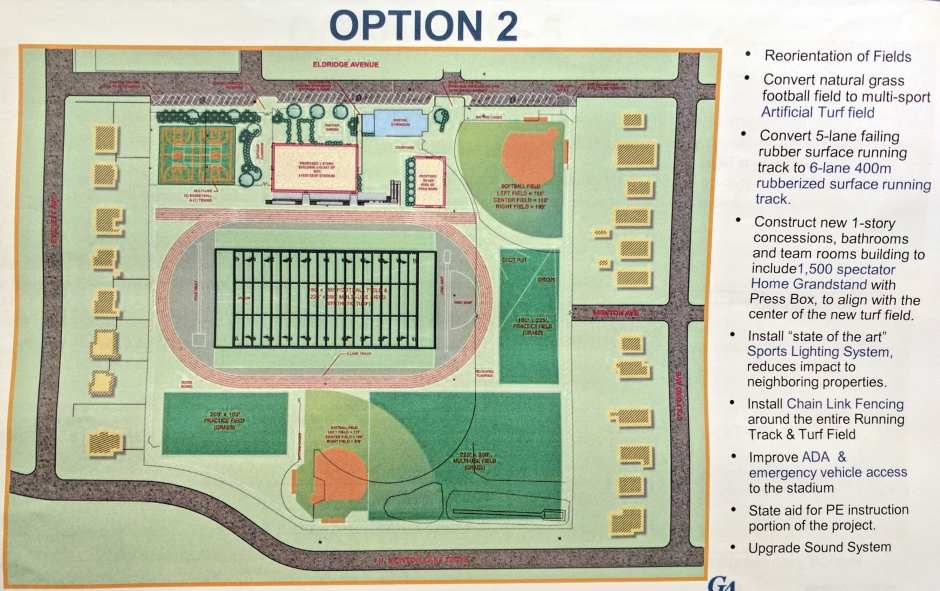 A possible layout of the Collingswood High School athletic facilities for which the district will go to referendum this fall. Credit: Matt Skoufalos.

Since the grass football field “can’t handle all the play people would want,” Hatzell said the district favors a move to turf fields, which will also help its grass-and-dirt field hockey and lacrosse teams. Those sports are played on turf fields in the playoffs, which he said is “a faster, different game,” especially against opponents who play more games on turf throughout the year.

Engineering analyses of “the whole backyard” led to a plan to rotate the stadium 90 degrees, freeing up enough space to add a second turf field, Hatzell said. A new football stadium would include new locker rooms, concessions stands, and storage for buildings and grounds equipment beneath the bleachers.

The committee also wants to address the needs of the CHS 18-21-year-old adult education program by creating a contemporary life skills classroom. That space could double as a living-learning lab for use by groups like the borough Odyssey of the Mind teams. Hatzell said the body is still discussing whether that life skills building could be moved across the street from the high school or must be physically attached to the stadium to fulfill its obligations for the program. 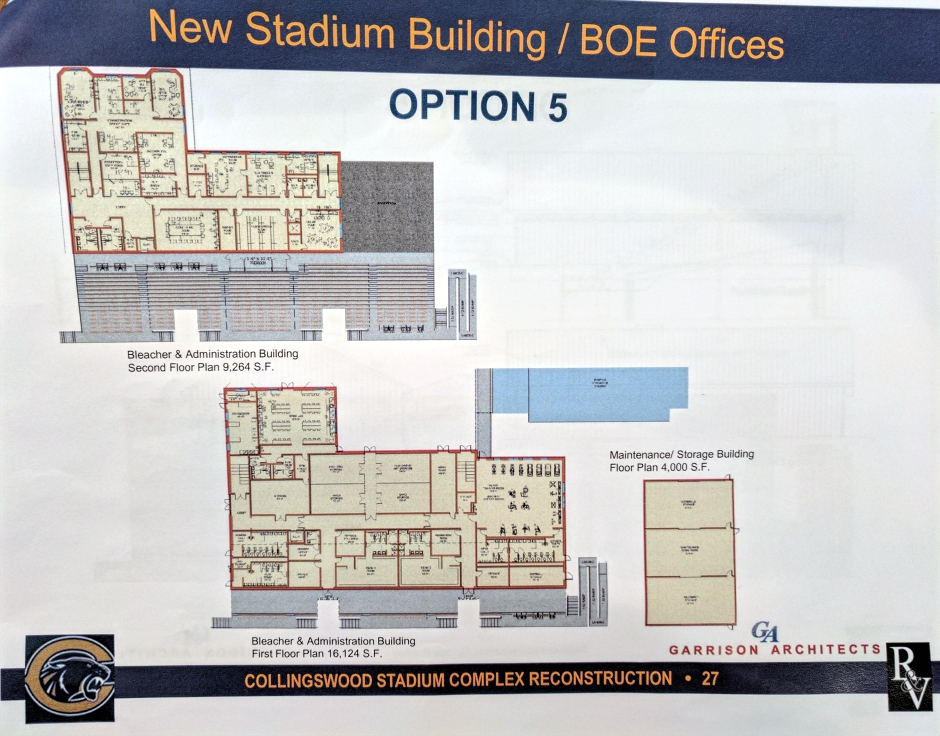 One potential change that could come in a Collingswood athletic facilities referendum is a new space for the adult program and board offices. Credit: Matt Skoufalos.

Another possibility involves relocating the CHS weight room to a detached facility and transforming its current facility into the life skills classroom; any additional building could also include new offices for the district staff, relocating them from their current space in the Zane North elementary school basement.

“I don’t think it’s a proper workspace for all the professionals we have in our superintendents and business office,” Hatzell said. “That could take up some space in a new, two-story structure attached to the stadium.”

Hatzell said the district hopes to condense its options into an outdoor space referendum that includes plans to update the elementary schools with (rubber mulch-free) living-learning facilities that are “integrated playgrounds.” Any option the board will consider will, at minimum, upgrade the stadium and fields, and will add new lighting; under all scenarios, the wrestling gym stays, and every elementary school playground gets a facelift.

Hatzell said some costs could potentially be trimmed by fundraising to furnish the life skills lab, but under each of the scenarios, more than 90 percent of the project does not qualify for state aid and must be sourced locally.

The committee will likely make a formal public presentation in May or June 2017 ahead of a September 2017 referendum.

If the vote fails, the district will have to deduct money for patchwork repairs to its stadium from the general operating budget for the next couple years, Hatzell said. Every million dollars financed adds $20 to the annual cost, and projected costs range from $4 to $20 million, an annual tax increase of anywhere from $67 to $393 for the next 20 years for a home assessed at the borough average.

“It’s a very pure process because the voters get to decide if they want to have it or they don’t want to have it,” Hatzell said. “I’m going to be 100 percent behind whatever we come up with.” 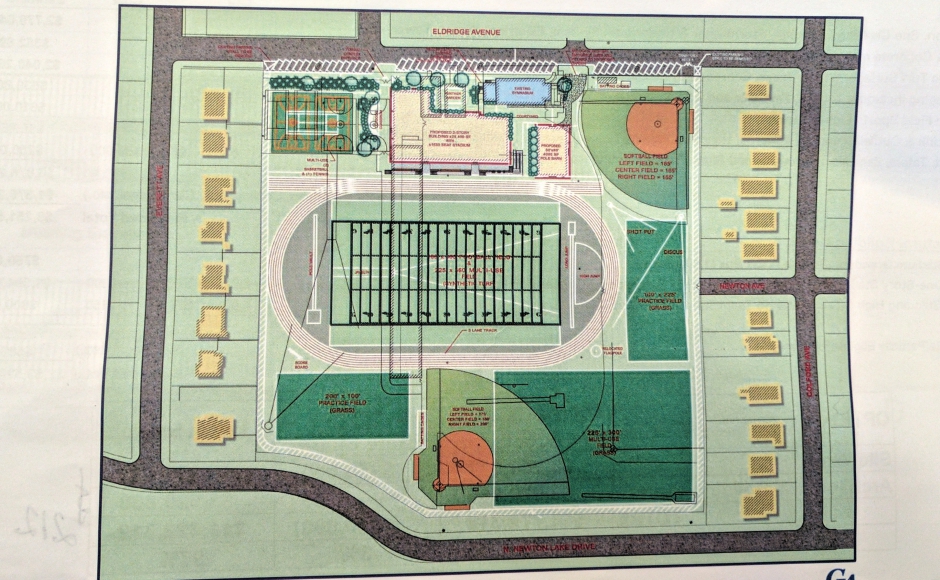 A possible layout (Option 5) of the Collingswood High School athletic facilities for which the district will go to referendum this fall. Credit: Matt Skoufalos.

The board president described his position as one of a balancing act between meeting the needs of the district and managing costs. Hatzell characterized the board and district as fiscally conservative, and said both will continue to solicit public input ahead of the presentation.

“We don’t spend any money that we don’t have, and we strongly care about keeping our buildings and grounds maintained perfectly,” he said. “I like to think the value of everybody’s home goes up by having good infrastructure at the school.”