Trending
You are at:Home»Business»Collingswood Couple to Debut Downtown Karaoke Business Next Spring

Mike and Ronnie Schmeltzer will open Songbird Karaoke in a former Masonic temple on Haddon Avenue next spring. 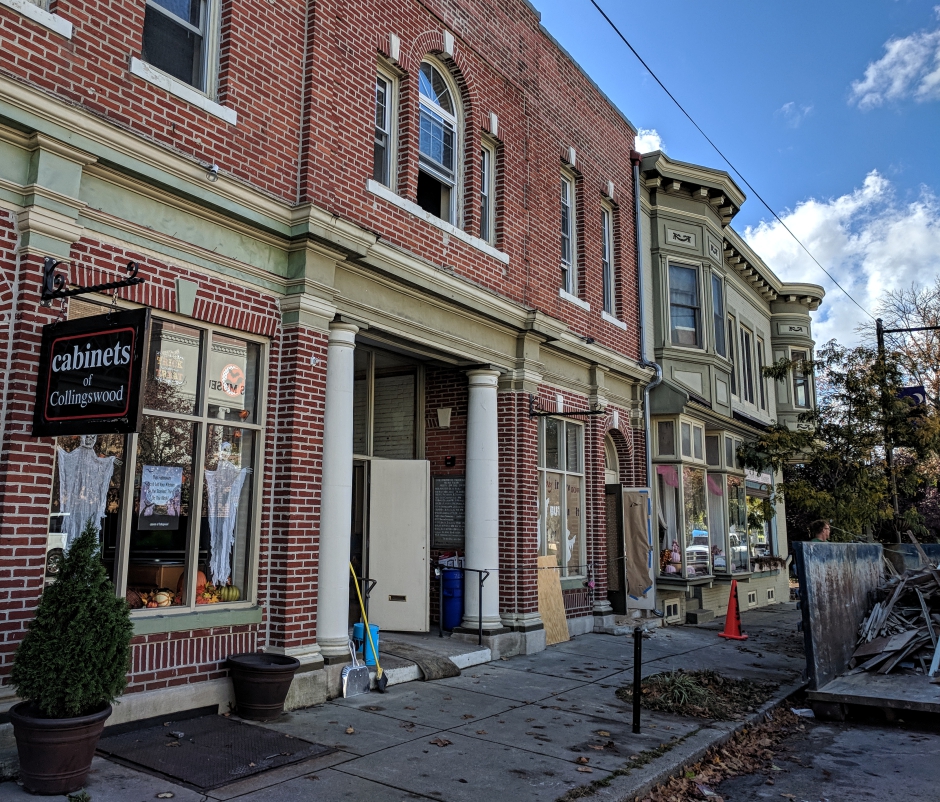 Longtime Collingswood residents Mike and Ronnie Schmeltzer are hoping their plans for a vacant Haddon Avenue storefront will strike a chord with visitors to the borough downtown.

The couple is transforming the former Cloud Lodge 101, a shuttered Masonic temple at Haddon and Irwin Avenues, into Songbird Karaoke, an hourly, private-room studio that’s set to open in mid-2018.

It’s not the first time the building will have been used as a performance space.

Originally built as the Palms Theatre, a 1914 movie house, it still houses a small auditorium and stage.

The Schmeltzers’ plan is to restore some of that entertainment to a business district that’s heavy on date-night diners, but could use some more after-meal activities.

“We think it fits a niche that’s not there yet,” Mike Schmeltzer said. “This is something that, if people particularly like, they can come back and it can be different every time.”

The Schmeltzers hail from the hospitality industry, in which Mike still works full-time, and first tried private-suite karaoke when he was living in Tokyo. They say it’s the right kind of business for them, and believe in its potential in a relatively untapped local entertainment market.

“It’s about coming and having a good time,” Ronnie Schmeltzer said.

“And I think that’s what we’re most interested in—people having a fun, good experience.”

Songbird will offer nine suites of varying sizes, capable of accommodating as few as two or as many as 16 people; the biggest room is the former Palms Theatre auditorium, which seats 30.

Reservations will be available on an hourly basis, with party packages for kids’ parties, birthdays, or corporate events. The business will serve neither food nor alcohol, but both will be permitted on the premises.

The Schmeltzers haven’t settled on a music supplier yet, but promise that Songbird will offer a deep and evolving catalogue of licensed material. Guests will be able to search for songs on their phones or an in-room tablet as well as “go[ing]  old-school with the book,” Mike Schmeltzer said. The service will include a request feature for songs that aren’t in its rotation, and Songbird will cultivate playlists for a variety of occasions.

Ronnie Schmeltzer said the rooms will aspire to a boutique hotel aesthetic with a variety of media—exposed brick, tile, and wood—to keep it to keep it “interesting, yet still elegant.”

Songbird will also keep later hours, running until 11 p.m. weekdays, and until midnight Saturday. For neighbors who would worry about noise, the Schmeltzers said there won’t be any.

Since they’re converting the second floor of the property into their new home, the couple is counting on the high-end soundproofing to do its job more than anyone else. They’re also banking on the borough downtown as the place to put down roots for the long-term. 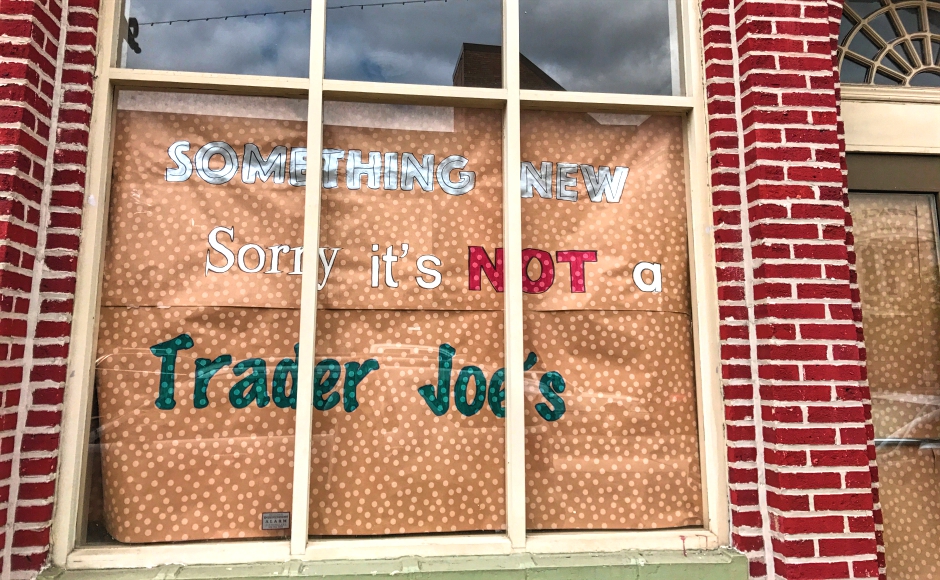 “Sorry it’s not a Trader Joe’s,” the knowing punchline to a community in-joke, showed Collingswood the Schmeltzers know the town. Credit: Songbird Karaoke.

“Collingswood just has the perfect mix of everything. It’s hard to find that anywhere else.”

As proof that the family is especially dialed in to the community, the Schmeltzers are already turning heads with the well-placed in-joke in their window display.

Sharp-eyed passersby picked up the coming-soon note that read, “Sorry, it’s not a Trader Joe’s,” a joke cracked by Ronnie’s son, Matt.

The humor wasn’t lost on Collingswood Community Development Coordinator Cass Duffey, who believes Songbird Karaoke represents a distinct, new addition to the a downtown that boasts a variety of experiential retailers.

“I think it really speaks to people’s desire to want to mix our strong restaurants with other things to do and experience,” Duffey said. “It adds to the depth of offerings in town. It’s exciting.”

Songbird Karaoke is coming to 790 Haddon Avenue in Collingswood. Follow its progress at songbirdkaraoke.com, or check back with NJ Pen for updates.