Trending
You are at:Home»Business»Collingswood Developers to Debut Arcade Game on Nintendo Switch Sometimes the easiest approaches are insufficient, and sometimes the most ambitious solutions yield to the simplest.

And when all else fails, there’s nothing so good for a hook as the day-glo nostalgia of the arcade heyday of the 1980s.

For Collingswood-based programmers Zenas Bellace and Christian Plummer, that’s the recipe behind the launch of their first major release, Super Rock Blasters.

The two hit it off about eight years ago at Global Game Jam, a worldwide collaborative event for game developers. Afterwards, Bellace picked up with the Philadelphia studio Cipher Prime, while Plummer joined Hit The Sticks in Wynnewood.

While preparing a game called Threshold for demo at Wizard World Philadelphia, the duo realized they needed something else to amuse convention-goers waiting in line to play it. Super Rock Blasters, another Game Jam-style project, was the answer.

Developed over the course of a weekend, and fleshed out over another couple weeks, it wasn’t flashy, but it worked. And the audience response was enthusiastic.

“It was successful,” Bellace said. “When we got back, we said, ‘Wow, that was kind of cool. Everyone seemed to like it, why don’t we put more time into it?’”

Over the next few years, they kept tweaking the game visually and functionally. They’ve presented it at the MAGFest independent video game showcase since 2015. In 2017, it was nominated for a Philly Geek Award. And next month, Super Rock Blasters comes to the Nintendo Switch.

An arcade-style, multiplayer space shooter, Super Rock Blasters traces its roots through titles like Asteroids, Spacewar!, and Sinistar. It’s presented in neon, vectored art with a pulsating electronic soundtrack from psy-trance artist Kri Samadhi, and includes modifications that let players tweak their experience in a number of ways.

“It’s a four-player space shooter with trippy visuals,” Bellace said. “You can turn collisions with asteroids on and off, friendly fire, shields, random teleport.”

“You can make the game very slow and strategic rather than very quick and dirty,” Plummer said. 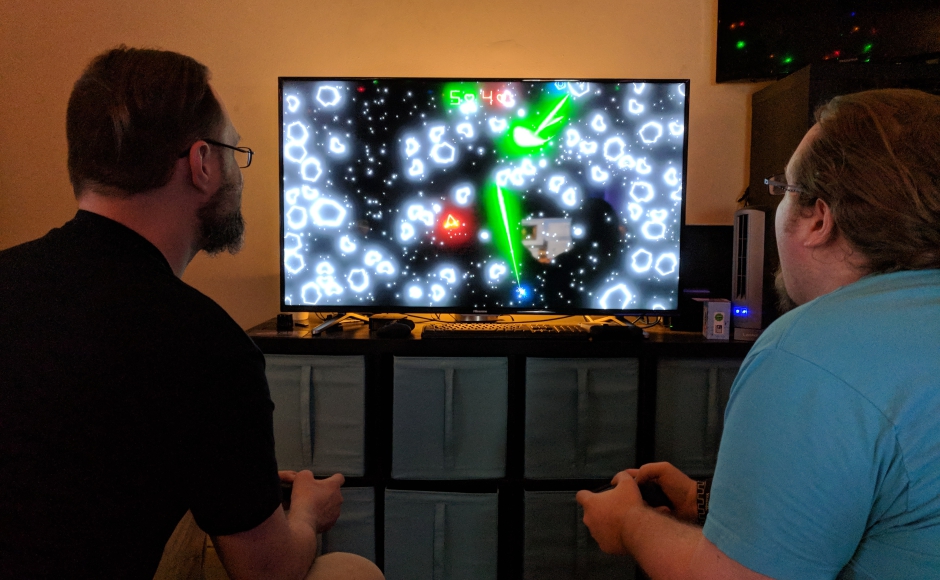 But the core of its gameplay is still as a multiplayer experience that’s perfect for the Nintendo Switch.

“After a round or two, people start heckling, cursing, teasing each other,” Bellace said.

“You’re with your friends, you’re having fun, and it’s not super-serious.”

Super Rock Blasters will be available on the Nintendo eShop July 5, and it’s on Steam and Itch.io now. Modifying the game for the Switch has taken a while, but it’s almost nothing compared to the months and years in which its core functions were built.

Along the way, Bellace and Plummer learned a lot about their own collaborative process.

“On a small team like ours, we all have to wear tons of hats,” Bellace said. “It’s not straightforward. Learning how to communicate is a big part of it.”

For their next project, Quadratron is pushing into virtual reality from its studio in The Factory, including a game based on a Revolutionary War minuteman experience. Bellace and Plummer hope to finish Threshold with the help of an intern this fall. And they still must balance their own projects with outside contract work, which adds to the build time.