In his debut film, Anthony Crupi tells the story of the teenagers who befriended David Bowie during the 1974 Young Americans recording sessions at Sigma Sound Studios in Philadelphia. 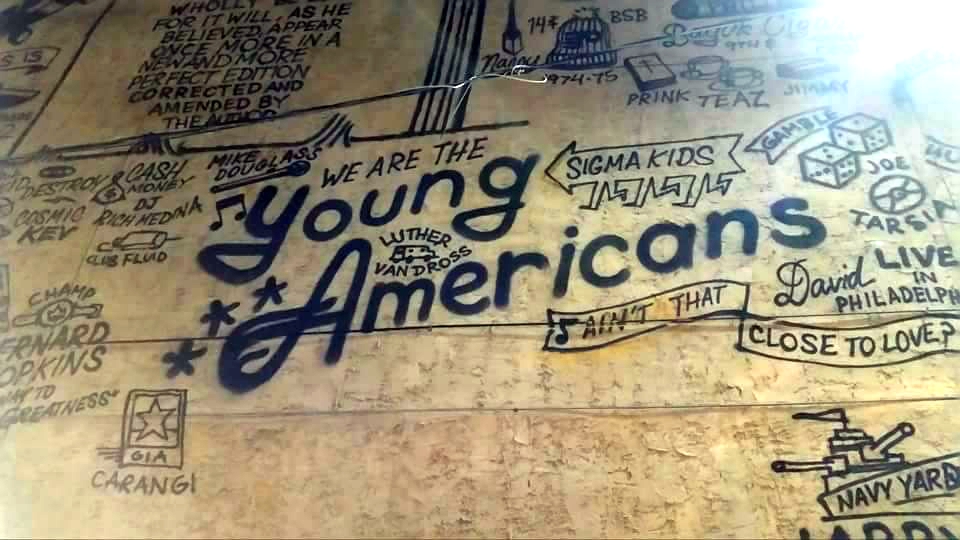 Graffiti in Philadelphia commemorates the legacy of the Sigma Kids. Credit: Anthony Crupi.

The city of Philadelphia has always has a love affair with glam rocker David Bowie.

The successes of his early shows at the Tower Theater begat the live album he recorded there, several Spectrum sell-outs, and the posthumous Philly Loves Bowie Week that cropped up in the years since his passing in 2016.

But few tales illustrate how deeply those connections run like the story of The Sigma Kids, a group of teenagers who stalked Bowie from his Tower Theater shows to subsequent recording sessions at Sigma Sound Studios.

Their lifelong friendship is detailed in a new documentary from Collingswood filmmaker Anthony Crupi, who sat with NJ Pen to discuss their story.

NJ PEN: What was the inspiration for this film?

ANTHONY CRUPI: I was following my brother-in-law Pete, who was in a band called Cyanide Saints, shooting at the TLA, and Dobbs on South Street; all these places that had a lot of history.

I started thinking, ‘What if I can tie what they’re doing into the Philly rock scene and the history of it, and tell some of those old stories; connect it back to the Philly Sound?’ One day, it just hit me in the car: ‘Didn’t David Bowie record a song here at some point?’ That was the nugget of the idea. 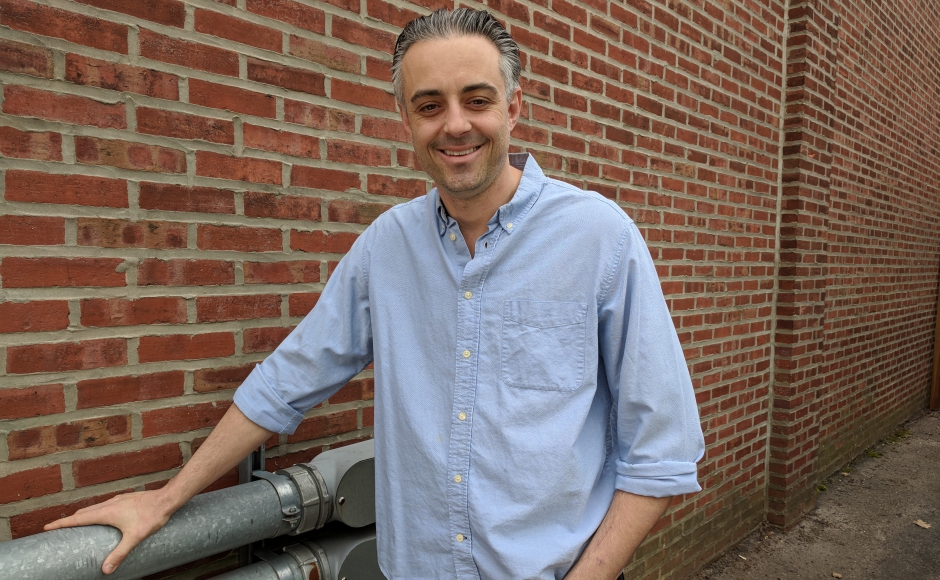 NJ PEN: Were you a big Bowie fan?

CRUPI: I was a casual Bowie fan at best. One Google search later, it was this avalanche of stuff and events that really seemed to mean a lot to a lot of people.

The story was so charming, not only him and his fans, how they connected, but just picturing Bowie as we know him now, thinking of him as a young artist.

NJ PEN: When you started looking around for some of the Sigma Kids, [Doobie’s Bar owner] Patti Brett was the first connection for you.

CRUPI: My two main subjects were her and Marla Kanevsy. There was a whole scene of kids who spent time outside the studio, and they all came together. Gia [Carangi] was one of them, the famous model.

It was a whole community. A lot of them are still in touch. The relationship started young, but it lasted the rest of their lives.

NJ PEN: They had bonded over David Bowie long before they ever met him.

CRUPI: They were outcasts and outsiders in their schools. Their love of Bowie, they connected over that. 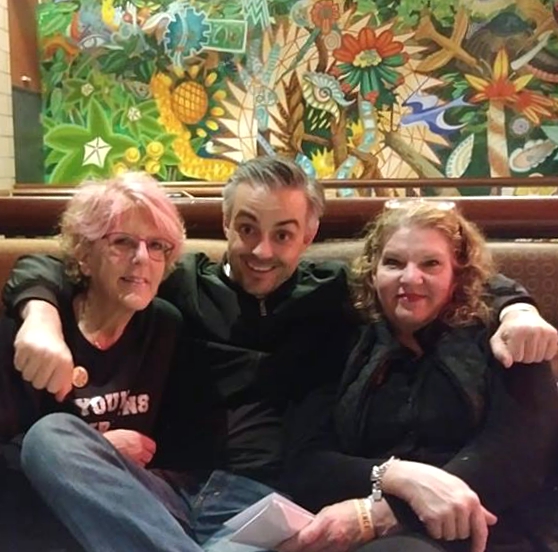 NJ PEN: Why was Bowie coming to Philadelphia at this time?

CRUPI: Bowie’s winding down with Ziggy Stardust, finishing the Diamond Dogs tour; he’s trying to line the next thing up.

Even going back to England, he was very much into American black music, as all the British bands were.

He came over with that, settled in on Philly.

NJ PEN: You say that Bowie liked Philadelphia because it was big enough to afford him his anonymity.

CRUPI: To really picture it, it’s hard. I still think he would have been a shock.

He does end up adapting a little bit of that Philly swag, whatever the look was, with the big bell bottoms, the shades, the fedora. I don’t know if he ever really blended.

I think it was more about being away from the industry. It wasn’t the pressure of New York or L.A., which he said he didn’t really have a positive experience with. Philly allowed him to blend in a little bit more.

This was early ’70s, ’73, and into early ’74, when it kind of goes bad the first time. Anybody who knows anything about Philly history knows that it was very racially segregated. It was right after white flight, the neighborhoods were very segregated; police brutality, it wasn’t a great time for civil rights.

But you had this core community of black musicians [MFSB] that were putting Philly on the map. Next to Motown and Stax, TSOP [The Sound of Philadelphia] is right up there. Ten percent of all the top 10 hits for a decade all came out of Philadelphia.

NJ PEN: So Bowie comes in looking for The Sound of Philadelphia, and they treat him like a carpetbagger.

CRUPI: He thinks he’s going to come in and record his Philly soul album. He books the studio. He puts out the word, starts the process of recruiting musicians, and one by one, he gets a no.

Basically, little by little, he gets the message that they’re not going to do it, and it was a political thing. Those guys were protective of that [sound]. They weren’t just going to give it away.

Musician Carlos Alomar talks about The Sound of Philadelphia in Anthony Crupi’s The Sigma Kids documentary.

NJ PEN: Then he hires [guitarist]  Carlos Alomar [of The Main Ingredient] to do it for him.

CRUPI: Bowie kind of put that together because he was desperate at that point. To get this very particular soul thing that he wanted, he needed somebody who had that background. Carlos was it. They all came together at the perfect time, because they ended up working together for years and years afterwards.

NJ PEN: Alomar is a package deal with his wife, session vocalist Robin Clark, and his best friend, Luther Vandross. And they end up being the link to the Sigma Kids.

CRUPI: Carlos was closer in age to them. I think he was in his early 20s at this time; the kids are 18, 17, it’s definitely an easier connection. Bowie says, ‘We’re coming back this summer, recording, keep an eye out.’ Sure enough, when he came back, they were looking for him. Keeping an eye out.

Once they found out what hotel he was going to be at, they tracked him down. They became close with Carlos and Robin, and then they were in. When Bowie was in his bubble, Carlos was their contact. 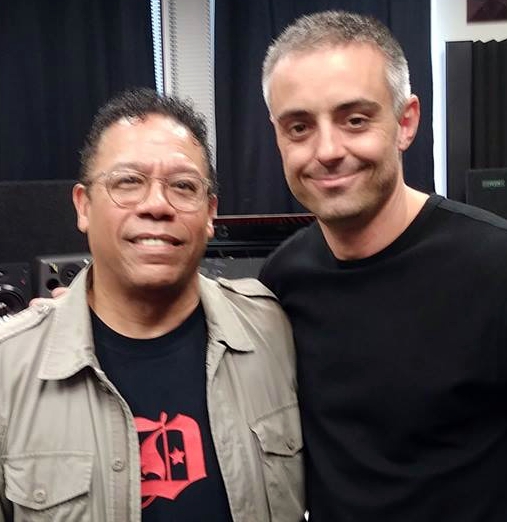 NJ PEN: They camped outside Sigma Sound Studios for hours while the band was working, and instead of chasing them off, Bowie was gracious to them.

CRUPI: He would send out food to these kids.

He would send out pizza, drinks, he would literally ask, ‘Do you guys have a ride home?’

That’s the stuff I love about this story. It’s such a neighborhood thing.

Here’s this millionaire rock star, here’s these kids from Philly, and he’s like, ‘Are you all right?’

[Bowie] really did know these people, and through the years, he would see them at every show; backstage, meet-and-greets.

NJ PEN: Your film shows that he even met their kids, eventually.

CRUPI: He did a meet-and-greet with Marla and her son [Zane] at one point. Two years later, she’s at one of the shows, Bowie jumps out of the limo, sees them, and goes, ‘Hi Zane.’

And how cool is that? How brilliant is that of him? I would be the nicest guy in the world to my fans, but would I remember their kids’ names? That’s what makes him David Bowie. It’s not easy.

Millions of fans in every city in America and all over Europe and he remembers this kid’s name. It was pretty special.

NJ PEN: What did making this movie tell you about Philadelphia?

CRUPI: One thing that I didn’t anticipate at all is the black musicians not wanting to work with Bowie. They were very protective of their sound.

I know Philly’s a very segregated place, but it was different then. [Frank]  Rizzo and police brutality, and racial segregation. It was a civil rights battle just like was happening all over the rest of the country.

NJ PEN: The story is about the kids, but as Carlos says, it’s about the nature of fandom, too. What do you take from his remarks?

CRUPI: [Alomar] was the first person of any position who I heard say it’s important to recognize these fans, not just because they put money in your pocket, but because, when we look out at them, we see a reflection of ourselves.

That’s something that I don’t always picture when I think of these artists. For them to be open about wanting to make sure they’re doing the right thing by this group of fans, that’s the first and only time I’ve ever heard that. They really appreciated these fans. They were devoted.

NJ PEN: And they got their payoff. They got the first listen, out of anybody, to Young Americans.

CRUPI: On the sidewalk, Bowie tips them off: ‘Whoever’s here Monday night, we have a surprise for you.’ The core group showed up; they get dressed up, they kind of chased off the other kids. ‘Nothing’s happening here.’

Sure enough, they get the word: ‘David would like you to hear a few of his tracks. Come on in.’

I don’t even know if there’s something in my life that I can compare that they felt at that time. It was just a huge event for them. The most special thing you could name in your life, that the odds were against ever happening, happens.

Philadelphian Marla Kanevsky was a teenager when she got to listen to David Bowie’s Young Americans album at Sigma Sound Studios. She describes the experience in Anthony Crupi’s The Sigma Kids documentary.

NJ PEN: Then you describe this moment where Bowie really was hanging in the balance, doubting the work, waiting for their reaction.

CRUPI: He’s not greeting everybody. He’s not in Bowie mode, dancing around. He’s sitting on a speaker, biting his nails, because he’s a nervous wreck sharing this thing with them. He played it for them, and he’s nervous.

Patti says he had these big ’70s sunglasses on, looking out over the glasses, scanning the room, trying to get the reaction. Once it was over, you could hear a pin drop.

There was a little bit of tension, and somebody in the back of the room says, ‘Play it again!’ And his reaction of, ‘Really?’ That’s the best. That’s what kept bringing me back.

David Freaking Bowie [having a crisis of confidence]. That’s when they all started dancing, hanging out. 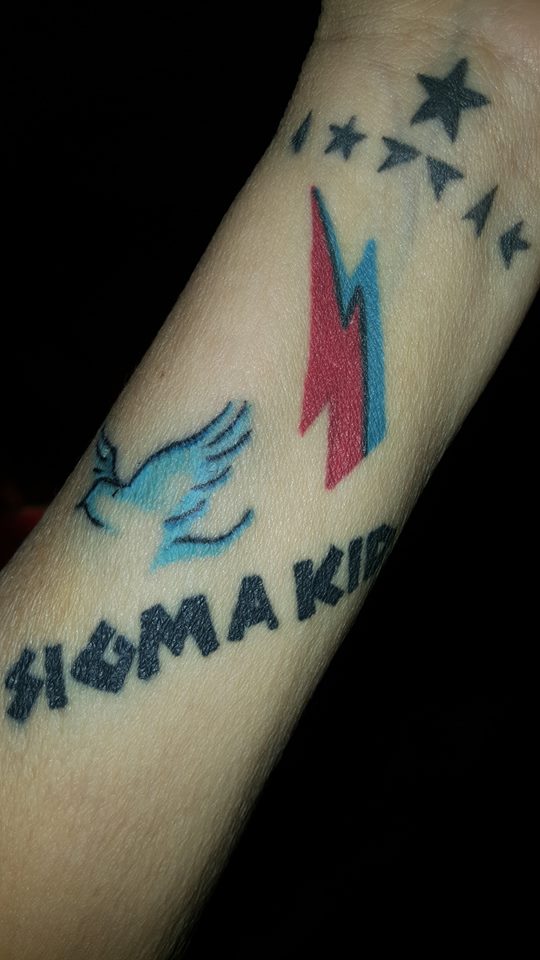 Some of the Sigma Kids reflect their bond in a tattoo. Credit: Anthony Crupi.

CRUPI: For them to be brought into that studio was a life-changing event for them.

It brought them closer to the music than very few fans have ever gotten, but it also brought them together with each other.

I know these women pretty well now; I don’t know where they would be with each other.

Thank God they found each other through this, and they came together year after year around this very specific thing that they love more than anything else.

NJ PEN: Where are people going to be able to see this?

CRUPI: I’m putting the finishing touches on it. We’re looking into Philly film festival in the fall.

That’s the goal now, to get it into one of these film festivals, and if not, do some screenings in the fall.

On our Facebook page, I’m posting clips, posting photos, and that’s just the best way to stay in the loop.