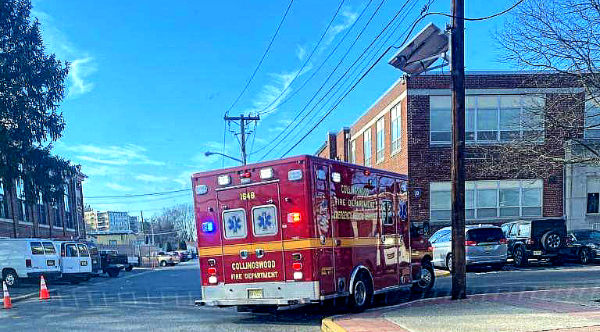 Paramedics arrive to transport a Collingswood High School student who was injured in a fight. Credit: NJPEN.

A fight among a group of Collingswood High School underclassmen Wednesday sent one child to the hospital for evaluation, and will draw an outside investigation from law enforcement.

The incident occurred during the third lunch period of the school day, when two male students approached another male classmate who was seated, eating.

After a few words were exchanged, the boys who approached the seated student both began punching him at the same time.

A fourth student entered the fray to defend his friend, and the altercation continued.

A pair of teachers interceded to break up the fight, and one was elbowed in the face in the process. Afterwards, paramedics transported one of the students to a nearby hospital for medical attention, as he had lost consciousness during the fight.

The entire incident was captured not only by school security cameras, but by other students with cell phones, leading Collingswood Superintendent of Schools Fredrick McDowell to describe it as “premeditated.”

On Thursday, Collingswood Police Chief Kevin Carey reported that two students involved in the fight, aged 15 and 16, will face second-degree aggravated assault charges, the penalties for which could result in as many as one to three years in a juvenile detention facility.

While noting that the investigation remains active, the chief shared the superintendent’s perspective on the presumptively planned nature of the attack.

“It certainly seems as if it was premeditated, and the person who was filming the video knew what was going to happen,” Carey said.

McDowell said that two of the students at the center of the conflict Wednesday had gotten “into a scuffle” a week ago off-campus, and that their decision to carry over the conflict in school was not a spontaneous one.

“Why would you choose to fight on-campus in a fishbowl with hundreds of adults present?” he said.

“Because you wanted an audience, and you wanted it in a safer environment.

“It was recorded by students because they knew it would be recorded,” McDowell said.

Without downplaying the severity of the fight, the superintendent said that the behavior behind it is “not uncharacteristic of some of the students who are in crisis and in need of additional support.

“Some of the behaviors that manifested today are consistent with some of the disruptive elements that are ongoing among some of our students who are actively receiving counseling and appropriate behavioral intervention,” McDowell said.

“This is one of those blow-overs from the mental health concerns that some of our children are struggling with that sometimes manifests itself,” he said.

The district recently won a two-year, $1.9-million federal grant to implement a trauma-informed care program at its middle-and-high-school campus.

McDowell said that money will be used to address the extreme stressors that some Collingswood students face, including family disruption, homelessness and food insecurity, suicidal ideation, criminal behavior, violence, and degradation of their physical and mental health.

“For many, winter break is a very celebratory season; for others, not so much,” McDowell said. “So when you are getting ready to take away the consistent experience of some, and they’re going to go into the unknown for the next seven-to-ten days, that causes a level of fear, anxiety, frustration, and some kind of resentment, and that bubbles over. They use this as a perfect excuse to air their grievance.”

The superintendent said that additional police will be present at the high school campus Thursday, and that faculty and staff “will be working collaboratively to address some of the systemic challenges that contributed to the melee.

“There were about five students involved, and there are 832 students at Collingswood High School,” McDowell said. “What we don’t want is for the very poor decision of five to be indicative and characteristic of the 825 who weren’t part of that action.

“If children are struggling, feeling anxious, angry or frustrated, there are resources that they can access at school or with their healthcare providers,” he said, urging parents to “please communicate with counselors and teachers so we can help.”

Collingswood Board of Education President Regan Kaiden said that the district is having ongoing conversations about how to approach systemic behavioral issues among the student population, which have spiked nationwide amid the disruptions of the novel coronavirus (COVID-19) pandemic, according to a federal survey of public school leaders.

“Everyone in that cafeteria needs to feel like they’re safe, and the students that are acting out also aren’t feeling safe,” Kaiden said.

“We need to be flexible in approaching kids who have very different needs, but they’re all our kids,” she said. “We need to remember that, and make plans to help them accordingly.”

Kaiden said that schools in the district “have safety measures in place [but] more are needed,” including budgeting for a weapons detection system that is anticipated to be installed prior to the beginning of the next school year.

The school board also plans to speak with local government officials to develop a comprehensive approach to the juvenile justice needs of children in both the district and the community at large, she said.

“Those talks are just beginning using that framework, and we’re hoping that it will be a more collaborative relationship that way,” Kaiden said.

“I think it’s important to make sure that we are doing everything we can to keep our students safe in a holistic way.”

Whatever the outcome of the investigation, or of the additional supports implemented within the district, some Collingswood students were shocked by the intensity of the fight Wednesday.

“People have seen fights before in school, but not to the point where someone’s carried out on a stretcher,” said one student.

“My worst fear is that, before I graduate, someone’s going to get absolutely hurt.”